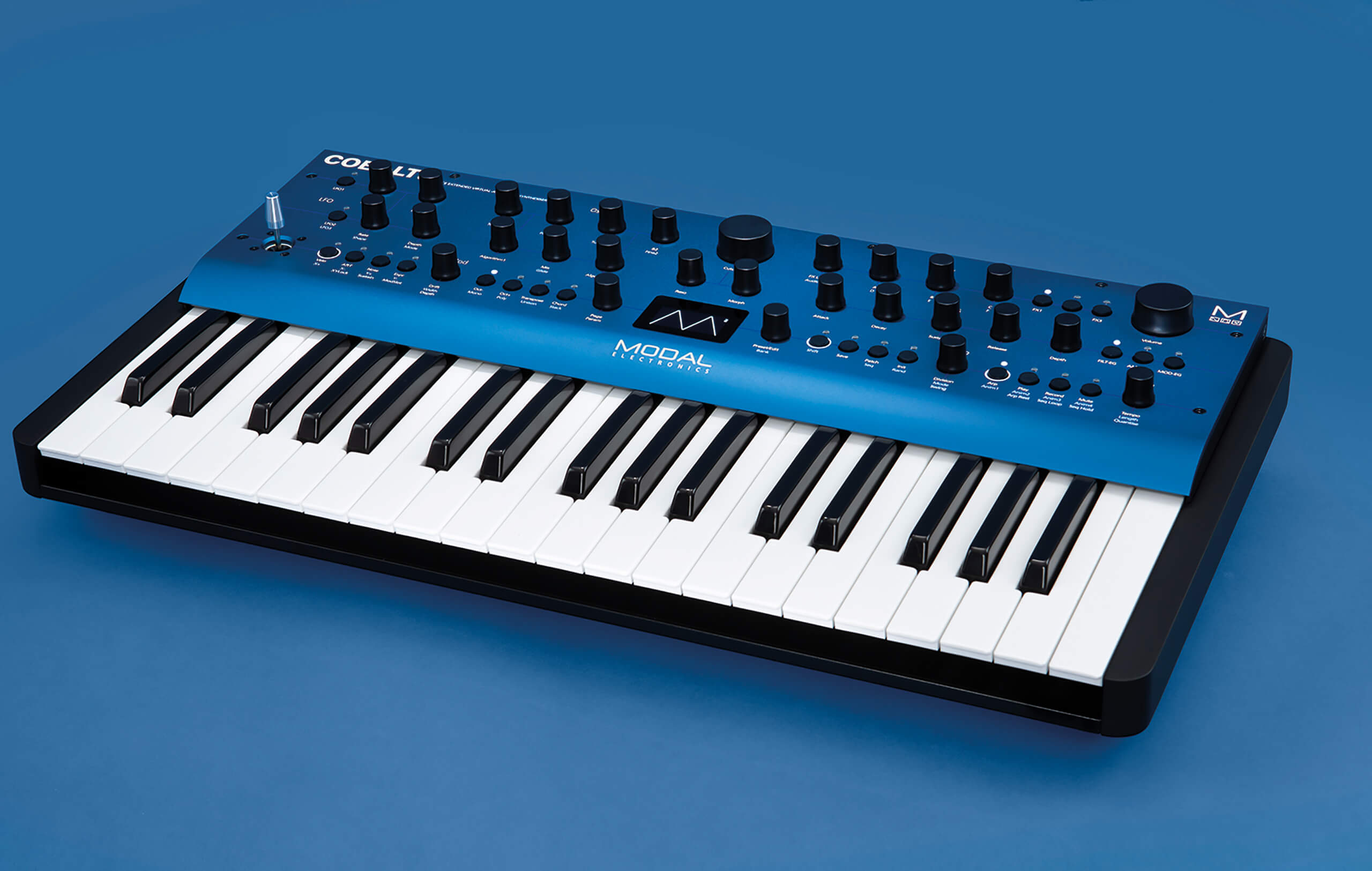 When Modal Electronics first burst onto the synth scene back in 2015, it made quite the impression. The mesmerising 002 and 008 drew high praise, despite their lofty price points. Having set a high bar, Modal has more recently turned its attention to a series of modestly priced synths that don’t compromise on creativity. Now, a new sibling has entered that line-up – and all eyes are on its virtual-analogue potential.

The Cobalt units are exceptionally robust, housed in heavy-duty plastic casing with an inviting metal front panel. Bedecked in cobalt blue and black, they’re uniformly heavy, which might be a surprise to some given their virtual-analogue architecture. The pots feel sturdy and well proportioned, with audio output via a pair of 1/4-inch jack sockets, alongside a headphone output. There’s also an audio input, with Sync I/O coming via dedicated mini-jacks, which ensures easy clock connections to modular and other similarly equipped devices. The pre-requisite MIDI in and out sockets are accompanied by a class-compliant USB connector, which also allows for editing and firmware upgrades via MODALapp, available for desktop and iOS/Android portable devices.

The Cobalt8 range looks incredibly stylish, with its subtle but striking colourway and central displays that are responsive and crisp. The pots and buttons back up the aesthetics too. Both the basic Cobalt8 and the larger 61-key Cobalt8X feature top-notch Fatar action keybeds, which assure the units’ credentials as proper players’ synths. The action is weighty, with quick key returns from every keystroke. The metal joystick on each model, located to the left, above the keybed, provides pitch and modulation control. 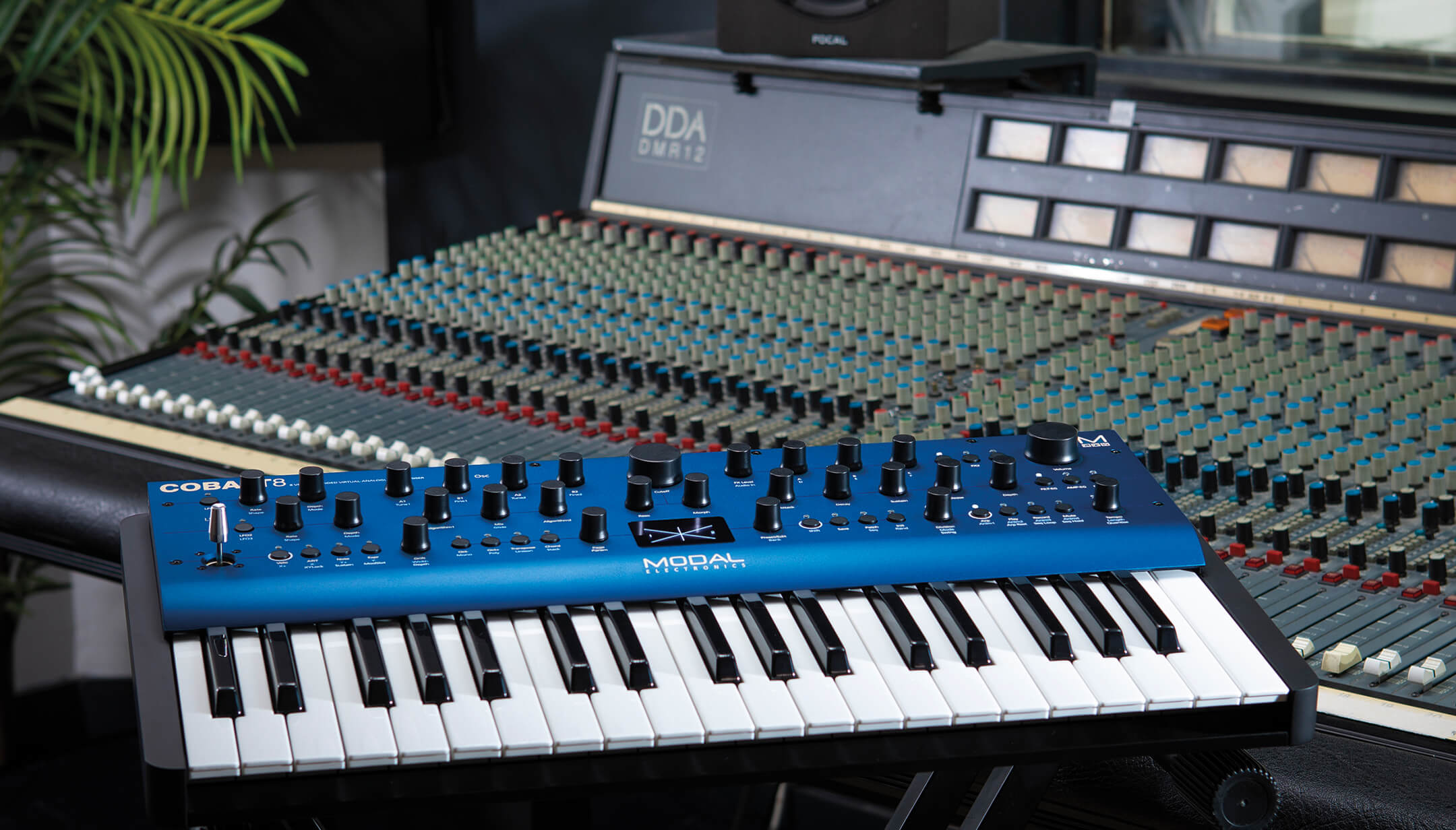 On the face of it, the sonic architecture of the Cobalt range seems fairly traditional. But that begins to unravel once you start exploring the oscillator section. Modal describes the Cobalt8 as an extended virtual-analogue synthesiser, and that extension begins at the front end. The unit offers two oscillator groups per voice, with each oscillator group employing up to four oscillators, which results in up to eight oscillators per voice. The polyphonic voice count is topped at eight but, due to the mass of tone created via the oscillator groups, an eight-note chord might well contain 64 oscillators, so it’s hardly a surprise that the Cobalt8 sounds big, rich and warm.

Many of the preset patches demonstrate a degree of analogue warmth and impurity, largely thanks to the movement possible at the oscillator stage. This is strengthened by the vast modulation potential across the whole voice infrastructure. The Cobalt8 is a digital synthesiser capable of emitting signals that sound very analogue, while benefiting from all of the complex waveforms and control that digital forums have to offer.

Modal has taken the complexity of the oscillator groups and made them effortless to control by keeping things simple on the front panel. The initial waveforms are described as Algorithms, and there are 34 available.

These range from traditional rich-sounding subtractive classics such as saw and pulse to chaotic, metallic and ring-modulated tonal clusters. Two further control pots allow you to morph and mutate your selected algorithm, with these controllable elements automatically assigned to suit the selected wave. The result is a complex-sounding front end, equipped with an easy-to-edit set of parameters. Modal has stripped the sweat and toil from this creative process, making the Cobalt synths satisfying to use. These controls are mirrored across both oscillator groups – a see-saw mix control blends between the two oscillator waves.

Following the traditional signal path, the Cobalt8’s oscillator section feeds its filter. This is a newly designed 4-pole ladder filter switchable between four filter modes, which include low-pass and balanced filter. The filter can also be driven to self-oscillation through the application of resonance. The most thrilling party trick available here is the ability to morph filters in real time, a function accessible via the morph pot next to the resonance control.

With so many options for morphing and modulation available within the oscillator and filter sections, the Cobalt8 truly invites modulation routing. Equipped with three LFOs, the Cobalt8’s modulations are dealt with rather intelligently. Upon selecting an LFO, the crystal-clear display instructs the user to nominate their desired modulation destination by turning the relevant pot.

As each LFO is equipped with a rate and depth pot, the control process is quick and easy. While your more complex oscillator algorithms that contain movement dance around reflectively the Cobalt8’s display, any resulting LFO modulation is unfortunately not reflected in this way. It’s not a massive flaw but given how good the visuals are we would’ve liked to see them here.

Two of the three LFOs are polyphonic, which can yield some fascinating and complex modulation possibilities. LFO syncing is available over MIDI, with up to 12 routings possible within the modulation matrix. It’s a similar story with the Cobalt8’s three envelopes, initially assigned filter, amplitude and modulation. These are traditional ADSR envelopes. There’s a pot for each envelope stage, along with a depth control. But you have to select which of the three envelopes you wish to control, by pressing the labelled button, which addresses each envelope in turn. This limits manual control to one envelope at a time – from the front panel at least.

Modal has packed an enormous amount of synthesis into these fairly compact synths but they never feel cramped while you’re exploring their sounds. The MODALapp software makes some parameters a shade more accessible too, with integration through VST and AU plug-in’s taking the concept further.

With 300 factory presets and room for up to 200 more, the Cobalt synths boast plenty of potential for both studio and live use. The integration of a 512-note step or real-time sequencer gives it yet another dimension too. The sequencer can be programmed using the panel, though MODALapp can make considerably lighter work of the programming process. During our testing, we find MODALapp so helpful that it becomes the primary display for all our editing functionality, mirroring all pot tweaks and button presses instantly, as we edit from the front panel.

The Cobalt signal chain ends with a finely balanced set of high-quality effects, all of which can be utilised live and just as easily deactivated when you’re working in the studio.

Above all, the Cobalt series provides an incredibly deep synthesis universe. It might be a virtual-analogue design but it sounds convincingly analogue in many ways, with a satisfying complexity and sharpness that reminds us of many industry classics. In a market that’s becoming increasingly populated by slick polyphonic synths, the raw blue sheen of the Cobalt 8 and its siblings shines through. 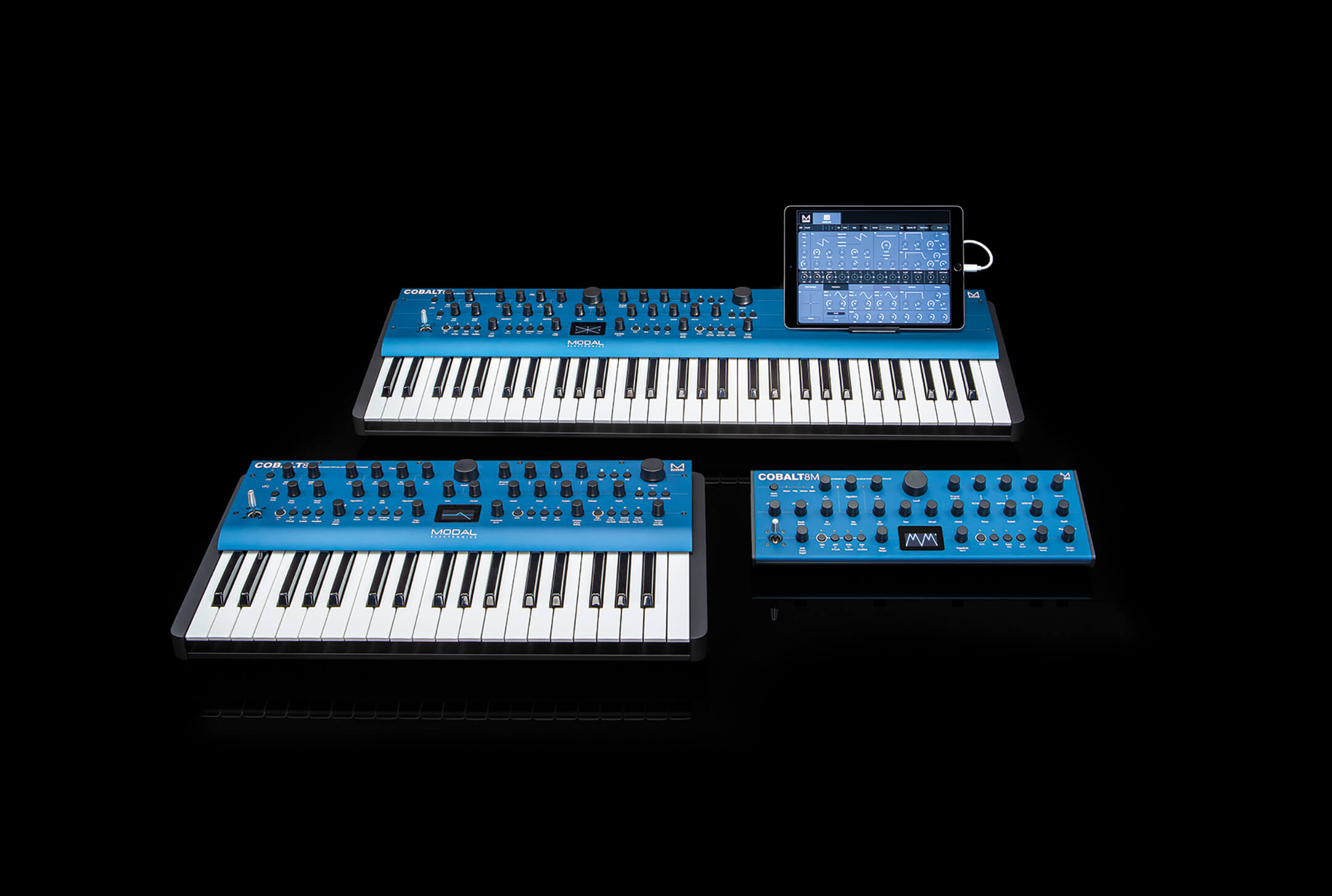 The appeal of the Cobalt series is widespread. The smaller Cobalt8, with its three-octave keyboard, is perfect for many desktops. It’s compact but does not suffer from a lack of control because of its reduced size. If the keyboard is less important to you, the 8M version will be happier on your desk still, or as part of a rack. Thanks to the integration possible via MODALapp and plug-ins, you can keep control close at hand while working in your DAW. The 8X offers the full player experience and could well prove a valuable keyboard for use in the studio. The build of all three is stellar. The Cobalt series also takes synthesis in an interesting direction, so if you like the idea of a good-quality and great-sounding hardware synth, these have plenty to catch the eye and the ear.

This compact poly from Korg is a fully analogue affair but only comes with a voice count of four. It’s equipped with a three-octave keybed in slim-key form, and sounds predictably, impressively analogue.

Almost as exacting in look and design, the Argon8 features similar usability and credentials but as a wavetable synth. Same build quality, similar specs and price, this is a worthwhile alternative.