The E-mu SP-12 and 1200 samplers helped define the sound of golden age hip-hop. Is this hotly anticipated newcomer a worthy successor? 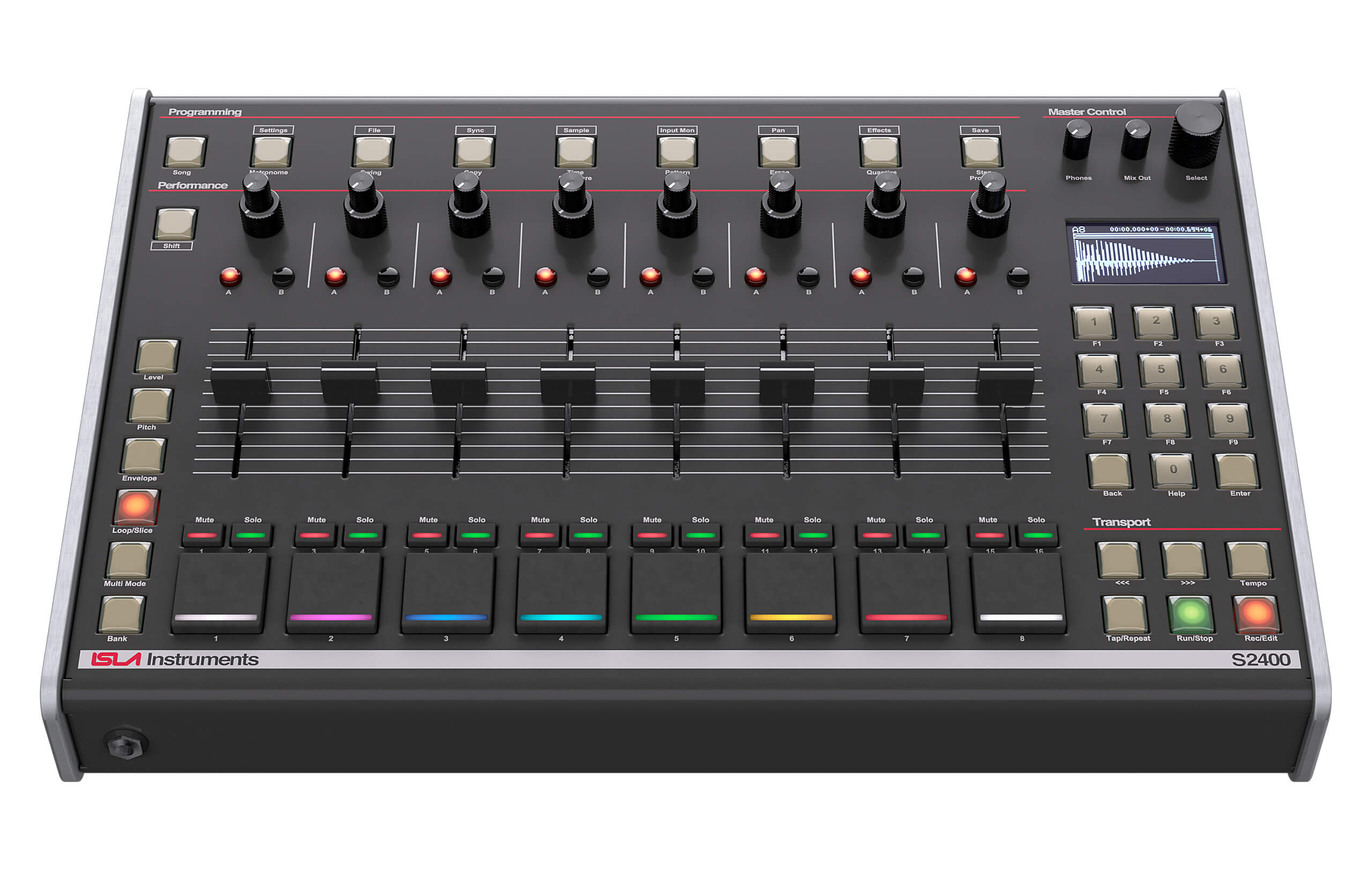 In recent years we’ve seen a glut of analogue synth reissues, vintage drum machine clones and detailed replicas of classic effects. Conspicuous by their absence are reproductions of vintage samplers. It’s hard to explain exactly why that should be the case, given that there’s still plenty of interest in vintage samplers from brands like Akai, E-mu and Ensoniq.

Well, now we have the Isla Instruments S2400, and it is undoubtedly the most ambitious reimagining of a vintage sampler. Company founder Brad Holland has a history of experimenting with digital gear in various forms, from heavily modified Alesis HR-16 drum machines to his recent KordBot MIDI controller. And the S2400 isn’t just a feature-for-feature remake of the E-mu SP-1200, but that’s the starting point. Isla sees it as a spiritual successor to the SP, combining the classic sound with modern features.

Released in 1986, the E-mu Systems SP 12 (Sampling Percussion, 12-bit) was an important milestone in the development of sampler technology. Considered one of the more affordable professional options in its day, the SP 12 took inspiration from the innovative California brand’s more expensive Emulator sampling keyboard, packaging a more basic version of similar technology into a desktop module format with pads and a simple built-in sequencer.

Most importantly, the SP 12 had a distinctive sound of its own, imparting a grit and crunch to samples thanks to their combination of relatively lo-fi 12-bit architecture and analogue filters. The SP-12 Turbo followed, with a whopping five seconds of total sample time, but the SP-1200 was the more usable machine. Produced through to the late 90s, the SP-1200 was a mainstay of golden age hip-hop production, used by genre-defining producers including Pete Rock, J Dilla and Large Professor. Outside hip-hop, you can hear it on Jam & Lewis’s pop productions for Janet Jackson, house tracks by Todd Terry, jungle by Roni Size and filthy rave from The Prodigy.

With original SPs now commanding premium prices on the secondhand market, demand for a reissue is high, but the Isla take on the SP concept isn’t a simple clone. As much as there may be a handful of purists who’d love a feature-for-feature copy of the original, what’s easy to forget is that SP-12s and 1200s are almost laughably basic by modern standards. Yes, we all know those gritty boom-bap sample sounds, but they also had simplistic MIDI specs, woefully short sample times and the other inherent flaws.

Sensibly, Isla has chosen to upgrade and improve in critical places while retaining the spirit of the 80s originals. If all you want is a clone, the S2400 can do that, but it can also do a lot more.

Take, for example, the sequencer: even in its heyday, the SP always played second fiddle to the Akai MPC60 when it came to raw sequencing power. Sensibly, Isla has opted not to recreate the original sequencer and instead combine old-school features with new, updated options throughout. 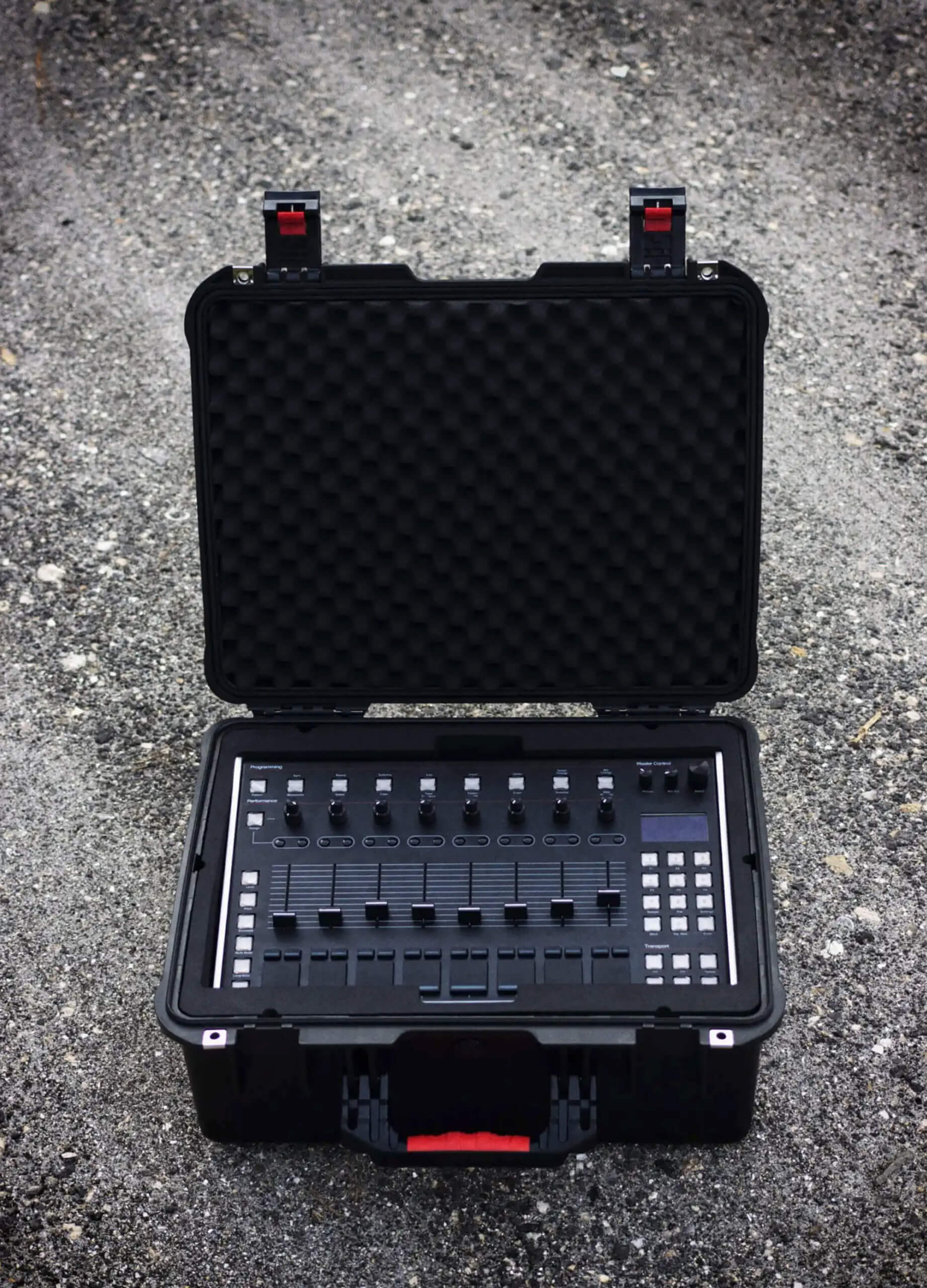 Hero in a hardshell

Our S2400 demo unit arrives in the optional hardshell case, a Pelican-style waterproof case rated to withstand immersion in a metre of water for half an hour. Hopefully, no S2400 owners find themselves in that scenario, but it’s a durable case that feels essential for anyone who plans to take their unit on the road.

The S2400 itself is a big, heavy unit that feels well built. While it has some of the same features as the SP, it’s certainly not a direct copy and has been comprehensively updated to take advantage of better-quality modern components.

Stylistically, perhaps it lacks a bit of the retro charm of the originals, but that’s a fair trade-off. You’ve got eight pads running along the lower front panel, corresponding to the eight tracks in each bank. Above each pad, there’s a fader with a smooth, light action, then a concentric potentiometer, allowing you to adjust two parameters via a single knob split into two parts. Concentric pots like these are quite unusual on samplers, but they keep the layout clean and uncluttered while allowing a more comprehensive control.

There’s a convincing argument that the limitations of old-school samplers are part of what makes them inspiring to use. However, the S2400 leans towards modern utility rather than strict, old-school limitations. Like the SP-1200, the S2400 has four banks, each with eight tracks, all of which can be set up with user samples.

What’s significantly more modern and user-friendly than the original SPs is how samples are loaded into those tracks and how they can be manipulated once you’ve got them on board. You can sample directly into the machine in real-time (total 21 minutes in 12-bit mono); you can load samples from an SD card (1TB max), USB stick or drag and drop WAV files into the sampler from a computer via USB Mass Storage Class mode.

The optimal format for those WAV files is the 48 kHz, 24-bit resolution at which the S2400’s sampling engine runs. Given that the original SP sound was defined so heavily by their 12-bit audio engines, Isla, of course, allows this too. Here is where the approach feels particularly versatile and smart: each track can independently have its audio engine set to Classic mode (26 kHz, 12-bit) to recreate the aliasing and crunch of the original SPs, or to HiFi mode for modern clarity.

The difference between the two audio engines is immediately apparent when you switch back and forth. It gives you the best of both worlds, letting you combine gritty, old-school, 12-bit flavour with modern neutrality and cleanliness where you see fit. 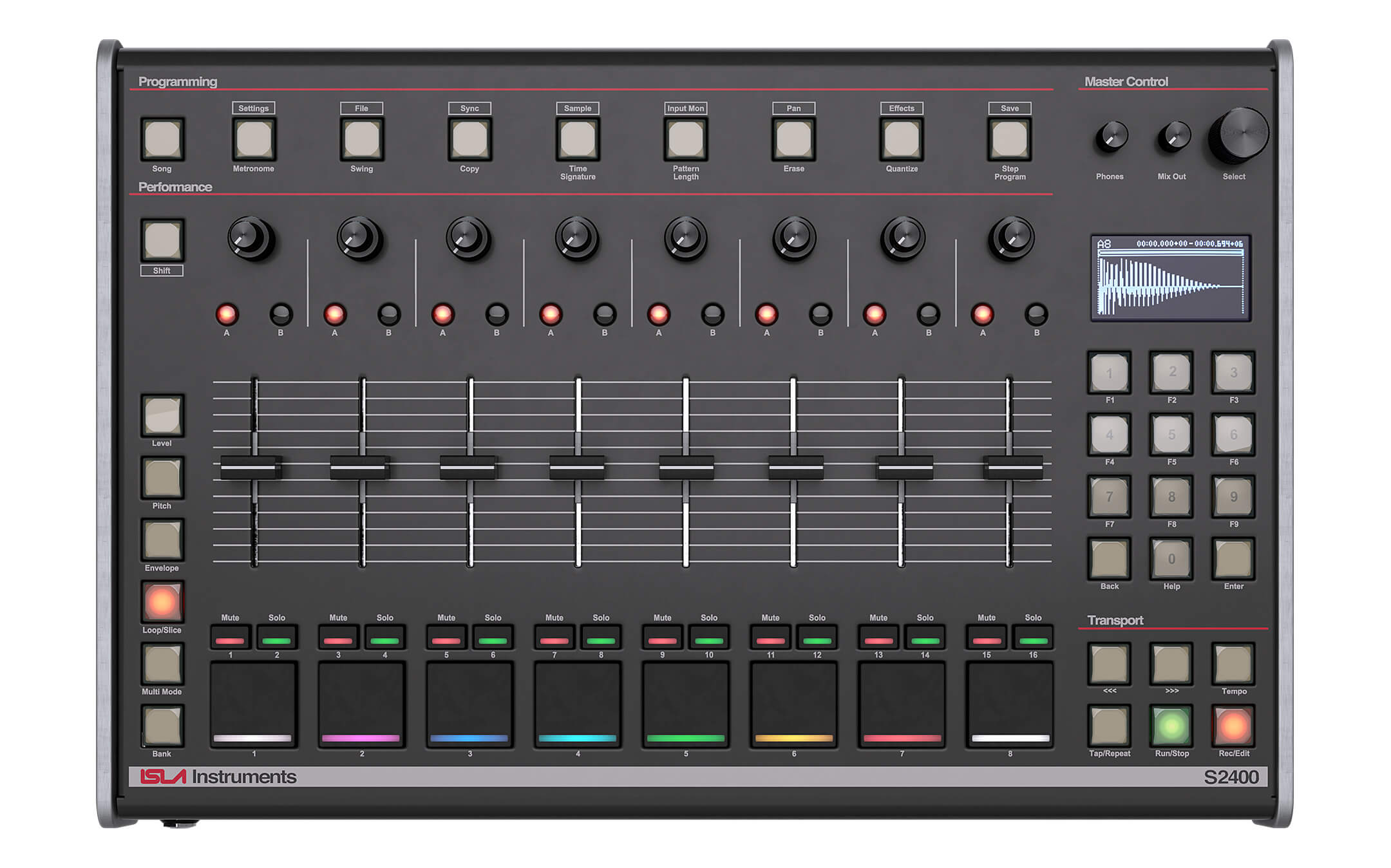 With some samples loaded, it’s quick and easy to get started playing and recording patterns on the fixed-velocity pads. Tapping the level, pitch or envelope buttons along the left-hand side assigns the faders accordingly, permitting real-time sound tweaking and per-step parameter recording.

There’s enough depth to the S2400 to warrant studying the 44-page PDF manual, but for quick fixes, hitting the help button will get you up and running, offering essential tips on just about every page of the instrument’s interface.

For visual learners, we highly recommend Alex Ball’s video user manual on the Isla YouTube channel, currently featuring eight videos on the basics of programming patterns, song mode, live looping and all the other vital processes. As tempting as it is to jump straight in, it’s well worth watching all eight videos first to understand the pitch, filtering and modulation options.

The videos introduce the slightly trickier but hugely powerful loop slicing feature. Multi Mode is also particularly effective, in which one track is spread across all eight pads and faders, each with different values for key parameters (level/pitch/envelope/loop/slice), allowing you to record complex parts on a single track.

Although it’s possible to create complex arrangements using song mode, we quickly found ourselves falling into a more simple rhythm of programming a few different loops and variations, then jamming them back and tweaking parameters on the fly. There’s a certain logic to this way of working with the S2400 that feels pleasingly old-school.

What’s also impressive is the live looping mode, offering up to eight tracks of live loops, with a maximum loop time of 19.4 seconds per track (equating to eight bars of 4/4 at 100bpm or higher). We’re confident we’ll see the S2400 used in exciting ways in live performances as well as its more obvious studio production applications. 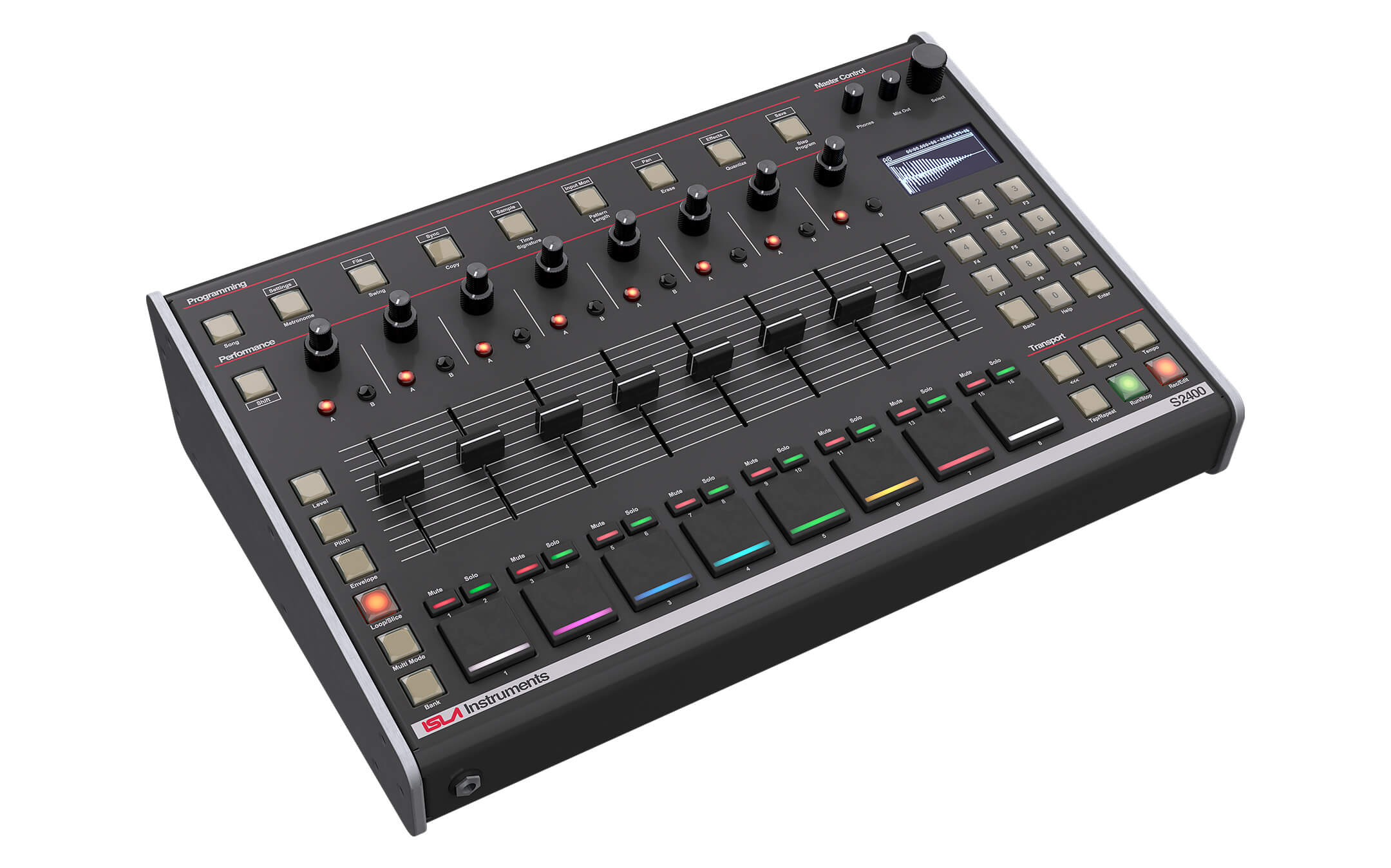 One of the SP’s defining sonic traits is its filters, including anti-aliasing filters on the audio inputs, before the AD conversion stage, plus a mixture of fixed and dynamic filters on the eight individual outputs. The S2400 mimics this approach, with a few twists.

The original SP filters used SSM2044 four-pole voltage-controlled filter chips produced by Solid State Micro Technology for Music. The S2400 uses the Sound Semiconductor SSI2144, which is a lightly modernised clone of the SSM original. Because of this, the filter sound is as close as possible to an original unit, but there’s a little more flexibility here than you’d find in the vintage component. For a start, you can bypass the filters entirely, but digital multi-mode filters also complement the analogue circuits for each track, which can be modulated using the envelope generators.

Cleverly, samples loaded from the SD card can also be resampled via the input filters to replicate the anti-aliasing filter of sampling into the original inputs (a low-pass filter at 13 kHz).

Isla has possible plans for expansion cards to add more analogue filters to the S2400, which would be a nice touch, and further plans to expand the effects section, which currently only offers the filters. Unfortunately, we can’t review features that don’t yet exist, but the S2400 firmware is effective enough in its own right. At the time of writing, firmware updates are being released once or twice per month, mainly focusing on bug fixes rather than adding features. 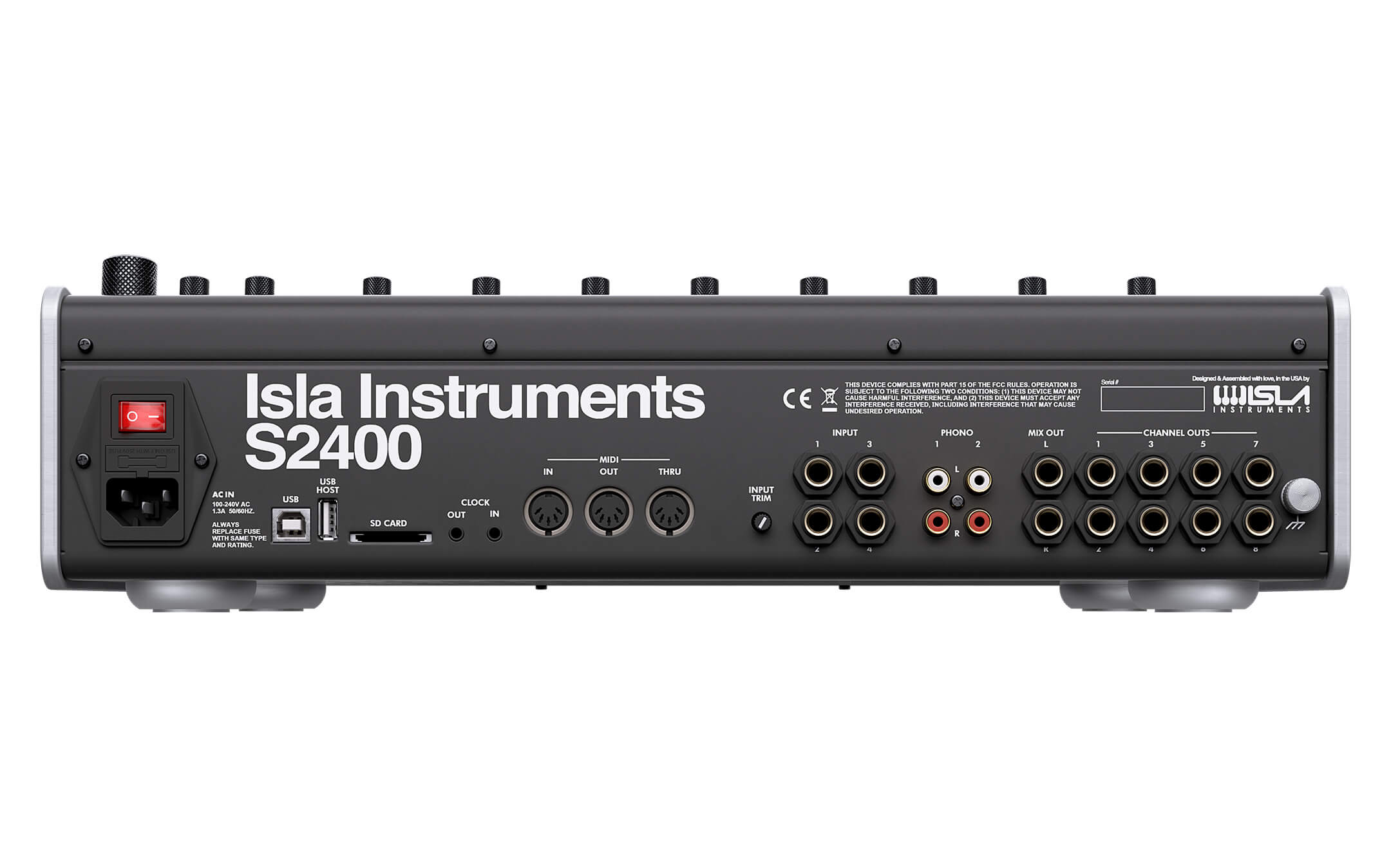 The S2400 is priced at a premium level, reflecting its boutique nature and the high build quality of the physical components. As to whether it represents good value, the most obvious comparison is with the original units. The SP might have been more affordable than most other samplers on the market, but it was never cheap.

On that basis, the S2400 feels like good value. It’s priced in the same ballpark as the Akai MPC Live and Elektron Octatrack MkII, both of which are very different prospects. In practice, the three samplers above all appeal to different types of people: the MPC Live leads the pack for accessibility and all-round versatility; the Octatrack is a good fit for musicians that want to go deep with a techy, modern approach.

The S2400 undoubtedly appeals most to those who prioritise character and straightforward workflow, but at the cost of some degree of versatility. It makes the most sense for loop-based music and does the best job of authentically replicating that classic 12-bit sampler sound.

What Isla Instruments has attempted with the S2400 is an engineering balancing act. The S2400 has been a long time coming, first announced in March of 2019, but there’s a sense that the intervening time has been spent wisely on developing the feature set. Even the factory sample content is impressive, with standard kits and free expansion packs, including sounds and kits from GoldBaby and Grant Nelson.

Recreating the legendary sound of the SP-1200 is challenging enough on its own, but updating the formula and making it more relevant for modern production styles is an even bigger challenge. Isla has hit the sweet spot, staying faithful to what made the SPs great while developing the blueprint into something fresh and relevant. It’s a worthy successor to the iconic SP.