This new desktop monosynth promises the best of analogue coupled with digital recall and effects. But is the Typhon purely myth or genuine magic? 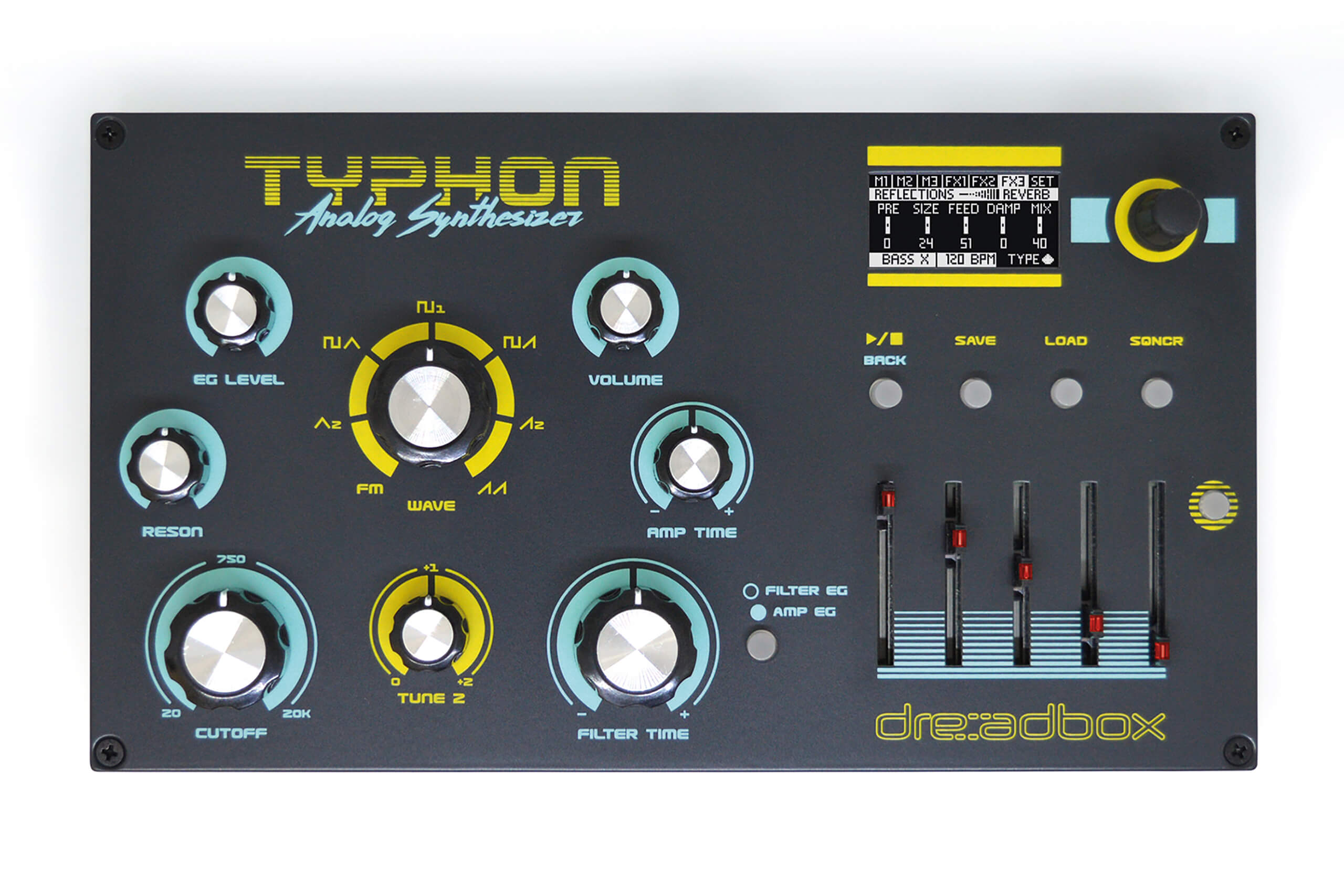 Greek synth specialist Dreadbox shows no sign of slowing down when it comes to releasing lean, mean analogue kit. Over the past few years, the Athens-based brand has introduced a slew of well-regarded music-making products, including modular building blocks, DIY boxes and modules, and portable effects, synthesisers and sequencers.

Like the many-headed monster after which it’s named, the Typhon combines many facets into one powerful, noisy, fire-spitting unit – a monophonic analogue synthesiser with digital control, sequencing and effects. 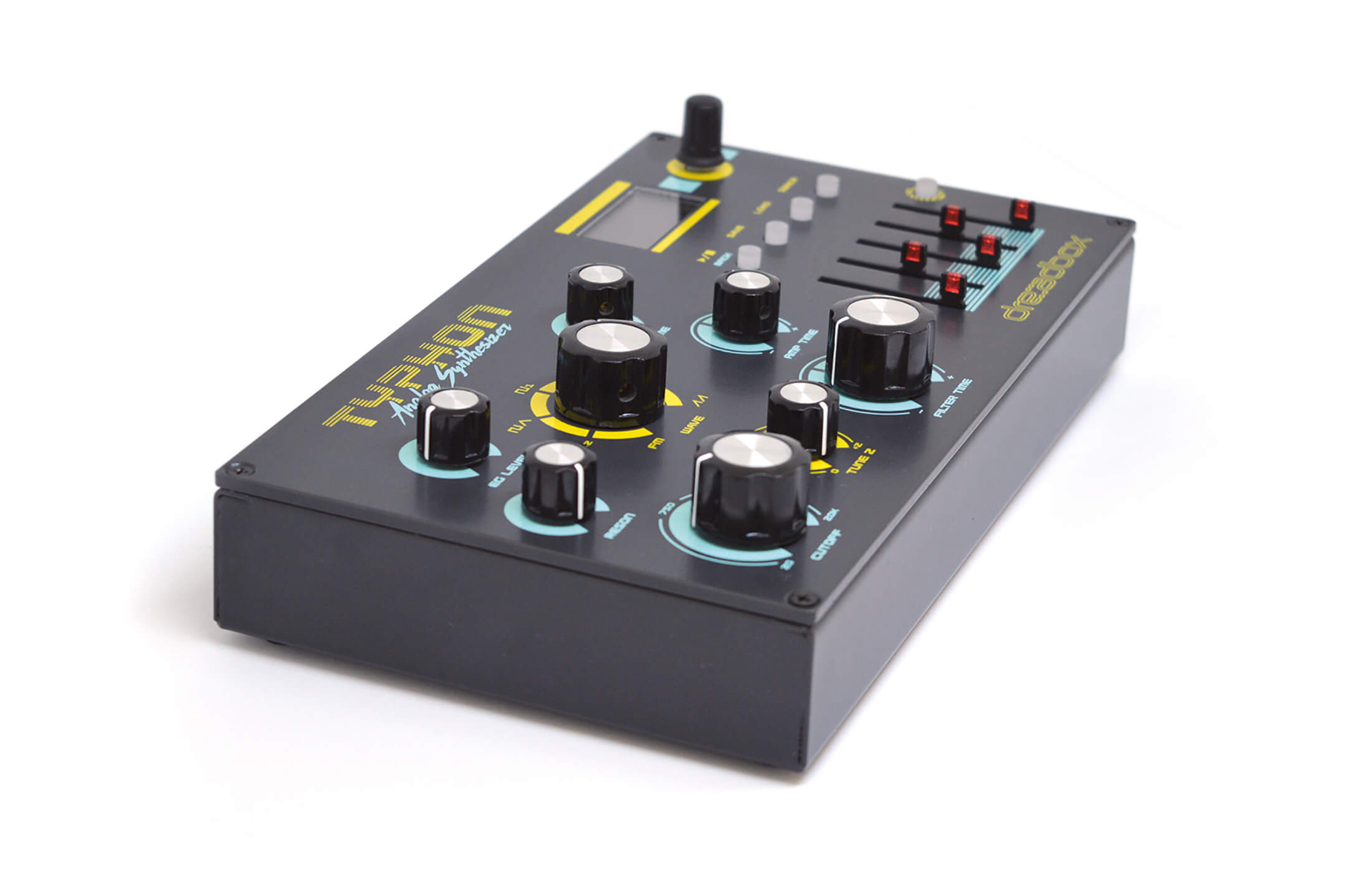 Like its stablemates, including the recently reviewed Hypnosis effects box, the Typhon boasts a bold 1980s-style aesthetic, with its rotaries ringed by electric yellow and uranian blue. Unlike its stablemates, the unit also sports an OLED display alongside its rotary encoder, knobs and faders. Its lack of front-panel patch-points also indicates a different approach from Dreadbox. There are still plenty of physical controls though, with the sliders taking care of on-screen parameters and pots providing direct control of the analogue sound engine.

The Typhon squeezes quite a lot into its small footprint – it’s only 23cm x 13cm (9 x 5 inches). There’s no power socket on the back side either, which confirms Dreadbox’s push towards true portability. Unfortunately, the Typhon doesn’t run on batteries but it can run off many different sources thanks to its handy USB connection. The most obvious point of contact would be a laptop or desktop computer but the Typhon can also draw power from portable chargers. There’s no reason you couldn’t use this thing in the park. In its current iteration, however, MIDI isn’t carried via USB, which means that the cable count is likely to grow if you fancy some desert-island music-making.

Despite its mobile leanings, this is no Korg Volca. Rather than lightweight plastic, the Typhon’s case is constructed from heavy-duty metal, making it a robust little box. Architecturally, the synth is relatively conventional. Its dual analogue oscillators are combined with the external audio-in signal before being routed through a 24dB/octave resonant low-pass filter and VCA.

Independent four-stage envelopes are hardwired to filter cutoff and amplitude, with three multipurpose modulators allowing for more complex sound design. Finally, there’s a three-stage effects section, with algorithms developed by DSP masters Sinevibes. This runs in parallel to the synth output, so analogue purists should be able to rest easy knowing that there’s no ‘digital taint’ here – unless you dial it in specifically, of course.

The Typhon’s programming is straightforward too. Its main wave control sweeps through combinations of wave shapes delivered by the oscillators. Though this might appear limiting, the change is continuous and satisfying, and it’s an intuitive process, with the knob granting easy access to FM and pulse-width control options.

This is where the benefits of a digital modulation and control system come into their own, as this parameter can also be modulated. Hardwired access is also provided for the VCO2 tuning, filter cutoff resonance and envelope depth, as well as Filter Time and Amp Time, which speed up or slow down your specified envelope, providing an efficient way to tweak envelopes on the fly. The volume control works globally and is not stored with any preset data.

You can achieve further programming via the sliders and screen, as well as five backlit buttons that cover amp/filter EG switching, preset saving and loading, sequencer selection and playback and menu navigation. A glance at the screen should give you a good idea of what else is on offer: M1 to 3 are modulators and FX1 to 3 are effects blocks. The three modulators work simultaneously and can be routed to many destinations simultaneously, including VCO pitch, filter cutoff, amp level, effects mix levels and delay amount.

Each is a general-purpose modulation source, with your chosen source type – LFO, envelope, random/S+H generator or step sequencer – determining the range of parameters on offer.  Despite its shortcomings, which include its lack of LFO tempo sync and the ability to modulate a modulator, this is a flexible system.

Similarly, the Typhon sports a simple but well-organised effects control system. FX1 is dedicated to distortion and bitcrusher, FX2 is confusingly labelled an Enhancer but actually takes care of modulation effects, and FX3 is for adding delay and reverb. For the most part, these are high-quality effects – we always welcome the ability to modulate delay time. It’s possible to modulate the reverb to achieve exceptionally lush decay characteristics and special effects too, though we’d love to have had even longer maximum reverb times to play with. 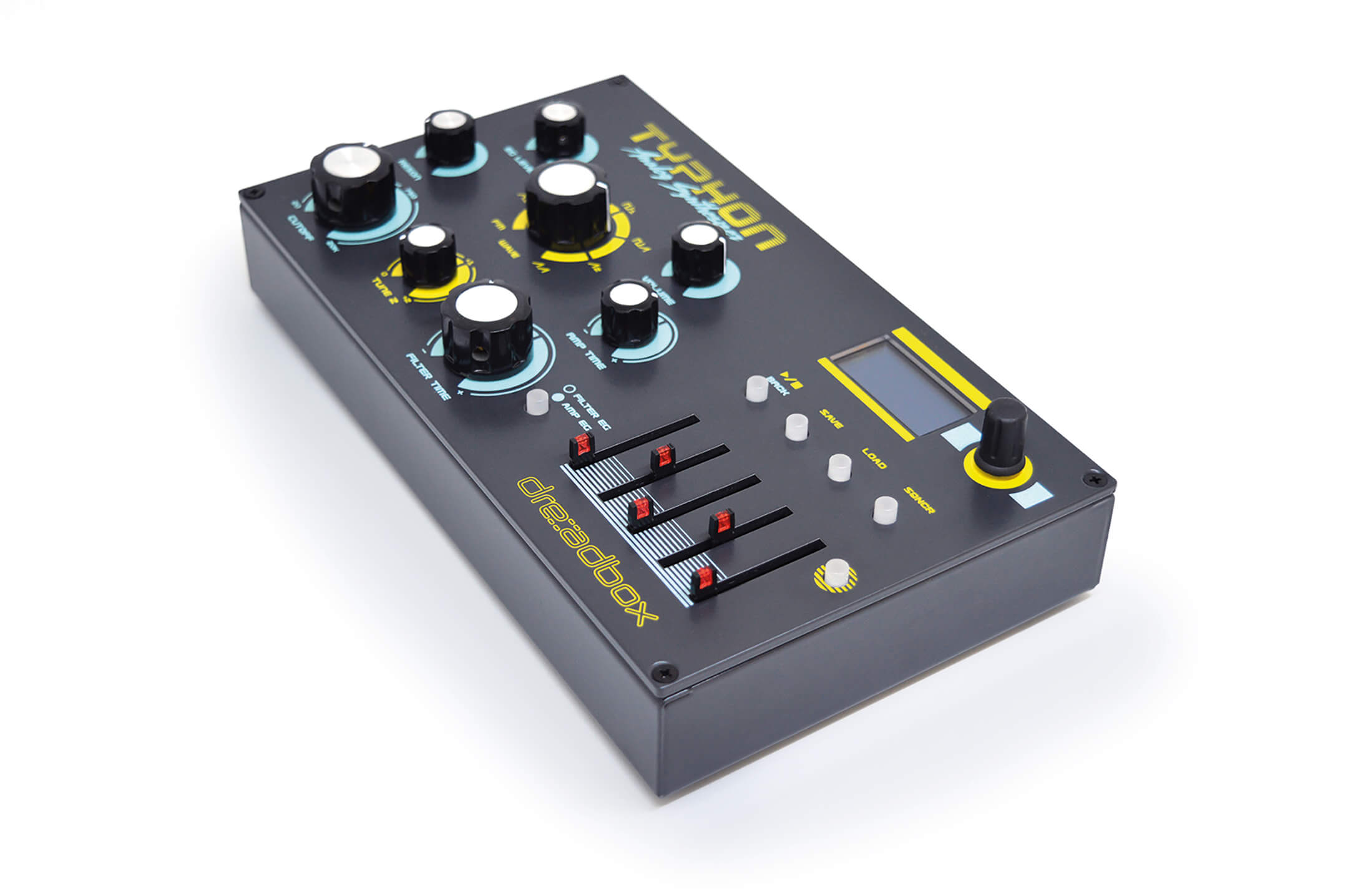 Alongside its global and MIDI parameters, the final part of the Typhon’s programming picture is the built-in note sequencer, which allows you to program sequences of up to 32 steps. Playback can be adjusted with control over BPM division, step-playback probability and overall swing amount. The current firmware also allows for transposition of sequences and note input via MIDI.

On the subject of firmware, there are a few features missing from the synth. The most obvious are MIDI over USB, full CC parameter mapping, and MIDI clock-in/out, as well as delay time and LFO tempo sync. Control over how the sliders pick up parameters, whether that’s jump or grab, would also be helpful. Luckily, Dreadbox is aware of these shortfalls and has published a list of upcoming firmware update features, which includes everything mentioned above and more, all slated to be in place by 15 October this year.

The Typhon is a fun, flexible and surprisingly powerful synthesiser. The upcoming updates will undoubtedly fix a few lacklustre features, as well as add some additional ones and, as such, the unit feels like it’s still in its late beta-test phase. However, the core analogue sound engine is strong and the fact that much of the synth is controlled digitally means that thrilling new features can be added along the way. The Typhon might not live up to the cataclysmic might of its serpentine namesake quite yet but we’re confident that, after a few canny updates from Dreadbox, this monophonic synth will only grow in power.

When it comes to choosing a monosynth, there’s a lot of competition at this price point, so it will always be a case of weighing up features with your specific requirements. The Typhon doesn’t offer the modular-style patching or full front-panel control of Dreadbox’s Erebus and others, so it certainly wins when it comes to compactness and, even despite its portability, it still boasts a solid dual-oscillator synth engine capable of beefy tones.

The Typhon’s modulation section is more complex than many of its rival units too, and its effects mean that it’ll prove useful in more than mere lead and bassline duties. Assuming that you don’t need built-in keyboard control but want sequencing and preset save/recall features, the Typhon should provide sterling service, especially once the promised firmware updates are made available over the coming months.

It doesn’t have preset memories and its sequencer is basic but the Pro-1 is a solid dual-oscillator synth. It’s based on a classic Sequential Circuits design so, despite its relatively affordable price, there’s a lot on offer here. 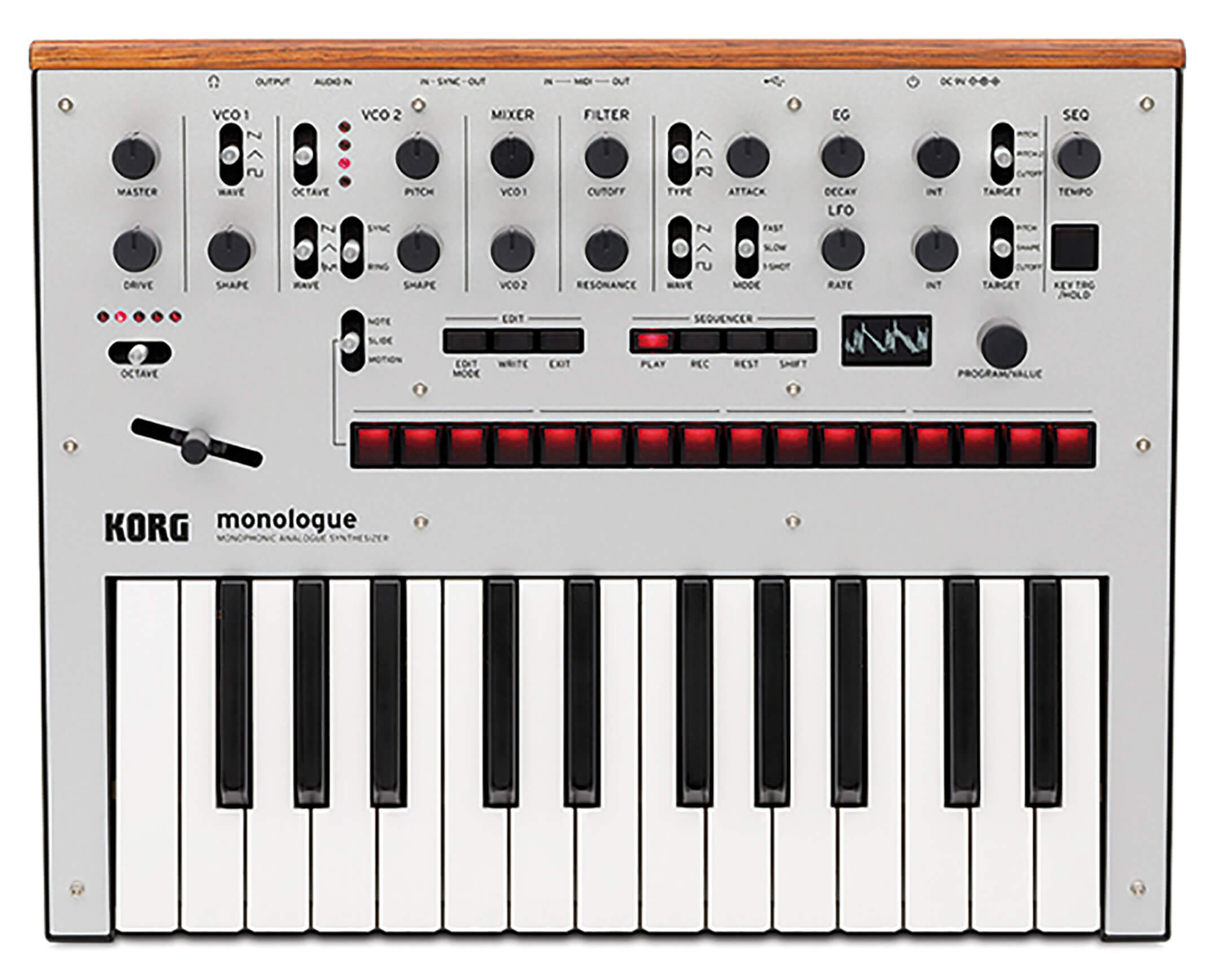 Though basic in some respects when it comes to modulation and effects, the Monologue packs a punch. It has a larger footprint than the Typhon but includes a keyboard and can run from batteries.