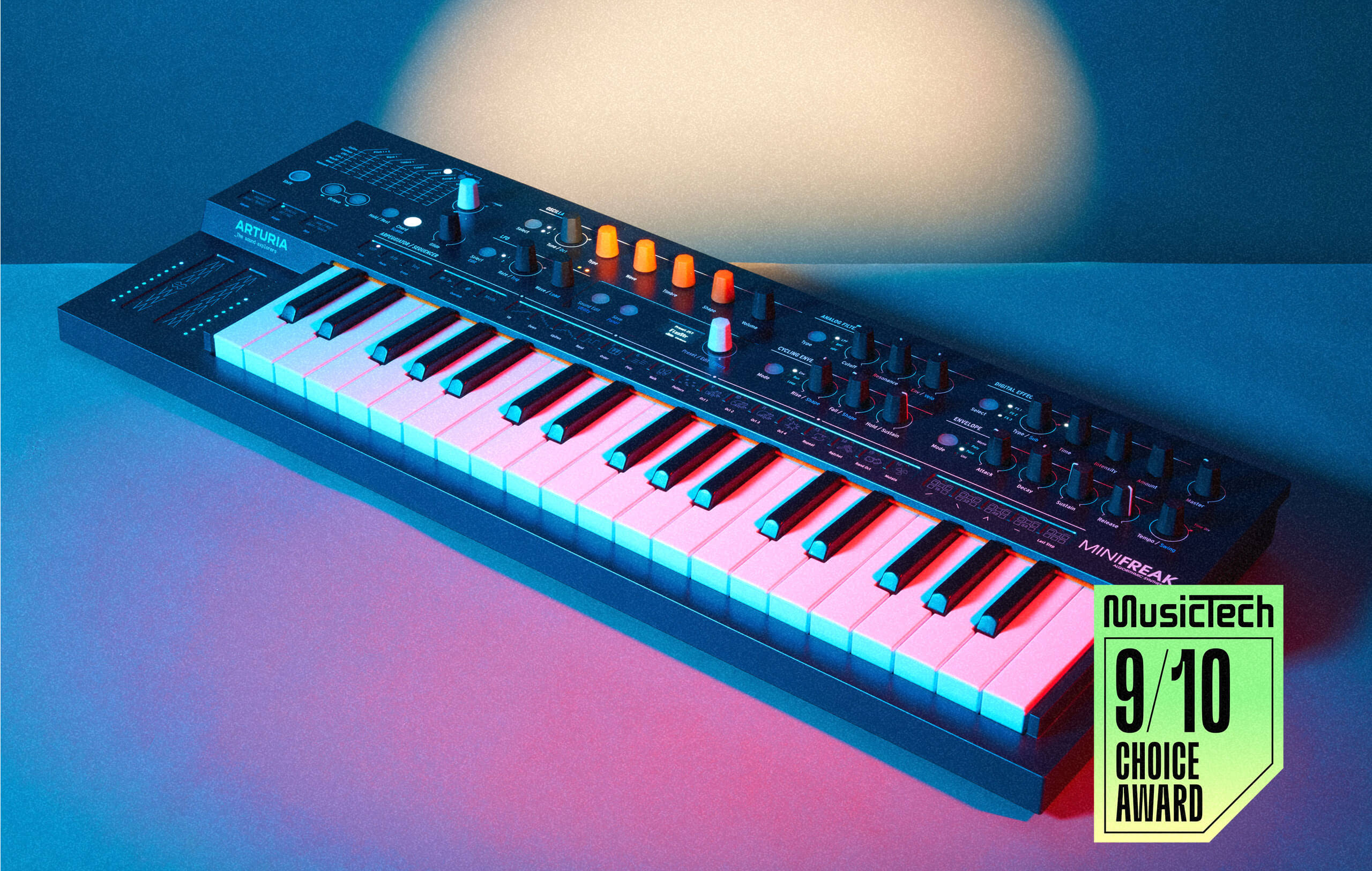 The Big Review: Arturia MiniFreak – a bantamweight synth that packs a heavyweight punch

With the latest addition to its Freak range of synths, Arturia proves that good things really do come in small packages.

⊖ No ability to set an engine’s pan position

Released in 2019, the first in Arturia’s Freak range, the MicroFreak, featured a remarkable amount of synthesis and sound-design power for such a diminutive instrument. This was thanks to its multi-engine digital oscillator and analogue multi-mode filter, a best-of-both-worlds approach that delivered timbral versatility and authentic analogue character in equal measure. The MicroFreak’s built-in pattern sequencer, arpeggiator and – in the case of the Vocoder edition – audio input only add to its power. The new MiniFreak is a lot like its older sibling, only even more powerful.

Though it’s slightly larger than the MicroFreak, the MiniFreak retains the compact stature of Arturia’s Freak product line, and the family resemblance is unmistakable. The most notable visual difference, other than size, is that the MiniFreak features a three-octave keyboard where the MicroFreak had just two octaves of touch-sensitive PCB panels.

Despite using miniature keys, the MiniFreak’s keyboard is both velocity- and aftertouch-sensitive, and has the solid and responsive feel of a full-sized keyboard. The layout is clean too, with the keys large enough for even the chubbiest of digits to negotiate cleanly.

This keyboard is a necessity given the MiniFreak’s expanded voicing capabilities. The synth retains the monophonic and paraphonic modes of the MicroFreak, albeit with 12 rather than four paraphonic voices, but also adds a fully fledged six-voice polyphonic mode.

The MiniFreak’s control panel is similar to that of the MicroFreak, with matching colour scheme, knobs grouped according to their function (oscillator controls, filter controls, etc), a modulation routing matrix, and sequencer/arpeggiator control buttons above the keyboard. The small high-resolution display remains, and is still used primarily for managing presets and displaying the name and value of any parameter you’re controlling; it also allows access to the synth’s deeper, tucked-away settings.

The only completely new thing the MiniFreak has over the MicroFreak is its effects section. This provides three effect slots that can be loaded with any of the nine processors – reverb, delay, chorus, dynamics, EQ, etc. The effects are stereo too, which brings new depth and class to the Freak sound. However, the guts of the synthesiser remain monaural – that is, you can’t pan a waveform or apply stereo spread to unison voices.

Arturia has not made any fundamental changes to the core Freak concept. Instead, the French brand has simply shoehorned more of it into the instrument. For example, the MiniFreak can host two simultaneous sound engines instead of the single engine of the MicroFreak. The engines provide a diverse range of tone-generation methods, from basic waveforms and advanced synthesis techniques like Karplus-Strong to esoteric offerings such as the formant engine. Many of these engines operate almost like multi-oscillator synths in their own right, so by stacking together two such engines the range and versatility of the MiniFreak’s voice is more than doubled.

More to the point, the second engine slot can host any of the five new processing engines that work on the output of the first. This gives the MiniFreak a whole new suite of tone-shaping tools that its elder sibling lacks, a full list of which is available on Arturia’s website.

Another benefit of this is that you can run multiple MiniFreak V instances in your DAW and then bounce these using the hardware MiniFreak to take full advantage of its filter. Being a true analogue affair, this filter introduces colour to the hardware synth’s sound, giving a soft, glowing warmth at low resonances and an exciting, aggressive edginess at high resonances. Not that the software emulation of the filter isn’t top-notch, but the hardware has that extra je ne sais quoi that makes it that bit more satisfying – there’s just nothing quite like the real thing.

The Matrix has you

Like its Micro sibling, the MiniFreak sports two envelope generators. The ADSR envelope is hardwired as the synth’s amplitude envelope, and can also control the filter cutoff via a dedicated strength control.

Less conventional is the cycling envelope, which has three time-based stages – rise, hold and fall – that create different shape and response characteristics than an ADSR. The cycling envelope can be triggered in a standard one-shot fashion but can also run in a loop, either constantly in the background or as multiple per-voice loops triggered when a note is played. Looping the envelope creates LFO-like results, but the method of control is very different to an LFO, making this a fascinating sound-design tool.

The LFOs themselves, of which there are two as opposed to the MicroFreak’s one, offer the expected waveforms – sine, triangle, saw, square and sample-and-hold. The eye-opener here is the ability to create your own entirely original LFO waveforms. The process is a little fiddly but is much easier when you have the hardware synced to the MiniFreak V and its high-res, mouse-controlled interface.

Mapping these modulation sources to destination parameters is performed using the MiniFreak’s Matrix panel. This lists sources and destinations along the axes of a grid of LEDs that light up where a mapping exists; editing these mappings is handled via a single twist-and-push rotary controller. The MicroFreak had the same matrix feature, but the MiniFreak’s has additional sources, as well as more destinations for those modulation signals.

The MicroFreak’s 64-step pattern sequencer has been carried over to the MiniFreak. The sequencer provides a single-note track, which is now polyphonic, and four assignable controller tracks. Sequences can run continuously or be triggered and transposed by playing notes. Editing sequences is intuitive enough, especially if you’re used to working with hardware step sequencers and drum machines, but if you prefer a more graphical approach, the MiniFreak V provides a more intuitive piano-roll-style editor for sequence editing.

The sequencer is performance-ready too. The step-selection buttons above the keyboard act as step mute/unmute buttons ideal for creating variations on the fly, and there’s real-time control over the sequencer’s note-gate time and Spice control, with the latter modifying the complexity of the sequence.

The sequencer engine can also be switched into arpeggiator mode. In this mode, the step controls are repurposed for managing the arpeggiator’s settings – pattern, octave range, etc – and again allow for spontaneous changes.

When it comes to hardware synths, though, the capabilities of a sound engine are only half the story – the other half is its usability and playability. Fortunately, like the MicroFreak, the MiniFreak has you covered.

All of the most important parameters have dedicated controls, with many secondary parameters also accessible by pressing a controller or holding down the shift button. Some of the knobs are of the continuous rotary variety, and therefore immune to parameter jumps, as are the standard min/max dials, which won’t adjust their associated parameter until they’ve been turned past that parameter’s current value. It’s an elegant solution to an age-old problem.

Additional real-time performance controls are provided in the form of a pair of touch-sensitive strips to the left of the keyboard, where you’d usually expect to find pitch and mod wheels. The touch strips can perform these standard functions too, but they can also be switched to macro mode, in which each can modulate up to four parameters simultaneously, and sequence mode, in which they’re wired to the sequencer’s gate time and Spice setting. Colour-coded LEDs alongside the strips ensure you always know what mode they’re in and what their current position is.

The MiniFreak is a small instrument whose unassuming exterior hides a behemoth of a synthesiser. It’s tough to believe the richness and character you can coax from such a compact, almost cute, instrument. Thanks to its cleverly conceived panel layout and performance controls that keep every parameter within reach, playing with the MiniFreak is never frustrating. Being able to connect this excellent control panel with virtual instances of the same hardware adds a deep layer of icing atop an already mouth-watering cake. C’est bon.