In a valiant attempt to hit a particularly high bar, Sonicware’s new drum and bassline synth aims to recreate the organic pleasures of 1980s music making. 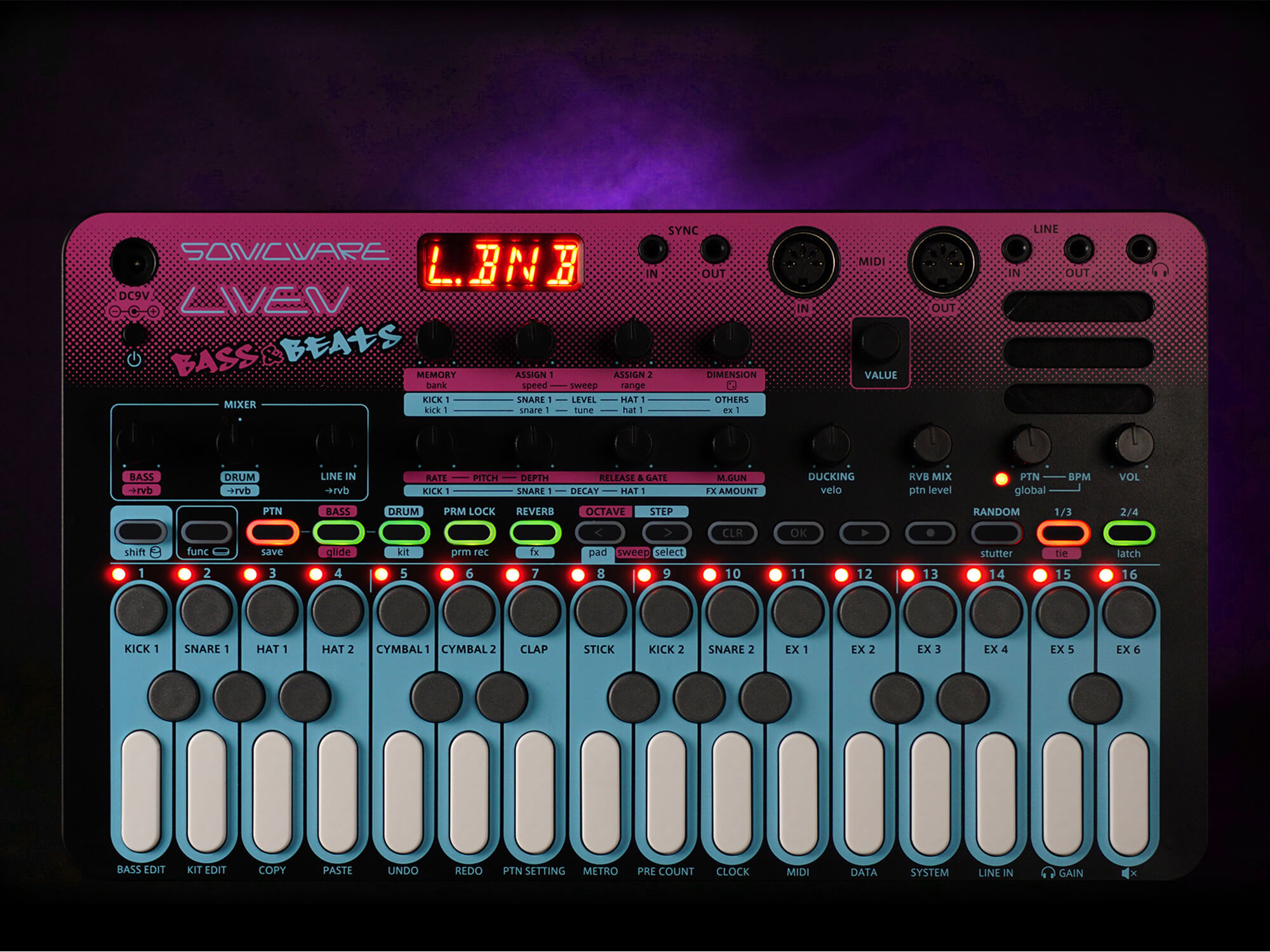 The growing interest in DAWless music production has led to various reimaginings of classic drum machines and step sequencers. Japan-based Sonicware has been riding this wave with its Liven XFM and Liven 8bit Warps, both synth-sequencers built into beatbox-style casings.

The latest product in this range is Liven Bass&Beats, a combination bassline sequencer and drum machine.

Bass&Beats is built into the same casing as its siblings, the XFM and 8Bit Warps. This means it’s fairly compact and lightweight, and very portable. Its mobility is enhanced by the built-in 4cm speaker and the option to run off six AA batteries, though we wouldn’t have missed the unremarkable speaker were it not there – the headphone output is sufficient.

The panel layout is identical to that of other Liven devices, with 16 white and 11 black buttons laid out like a piano keyboard. These are used for playing sounds and, with the aid of a shift key, accessing other system functions. Above this arrangement is a row of 16 Step buttons, each with an accompanying LED. The LEDs serve different functions depending on the unit’s current operating mode: indicating drum trigger or bass note events, indicating the active sequencer step, and so on. A row of backlit rubberised buttons allow for mode switching, transport controls, and other top-level functions.

The remaining controls consist of 16 knobs that, with the exception of the Value knob, perform varying tasks depending on the current mode. The values of the parameters controlled by these knobs change when you switch modes or load a new pattern, kit or bass sound. You’d hope, then, for continuous rotary controllers. They’re not. Unfortunately these are basic knobs with only minimum and maximum positions, so you have to live with the inherent parameter jumps here.

The buttons and labels have different purposes depending on the current Bass&Beats mode, and so most have at least two associated labels – and therefore small text sizes to accommodate them. This is a problem occasionally worsened by black text on a dark magenta background.

The mixed functionality of the Bass&Beats means there are more labels than there is space for, which is why Sonicware includes physical overlays for use when editing bass sounds and drum kits. It’s a nice idea but these sleeves are made from plastic-coated cardboard that could rapidly wear out, will be easy to lose, and is downright impractical when you’re in the flow. How Sonicware expects live performers to embrace this clunky format is beyond us.

That said, it’s hard to see how else Sonicware could have dealt with this labelling issue other than overhauling the unit’s capabilities to better fit its form-factor.

The Bass&Beats’ enclosure is finished with a retro-style four-character LED readout. It isn’t unhelpful but a more up-to-date screen – even just a two-line LCD – might have made navigating the Bass&Beats’ multi-function knobs and buttons much easier. 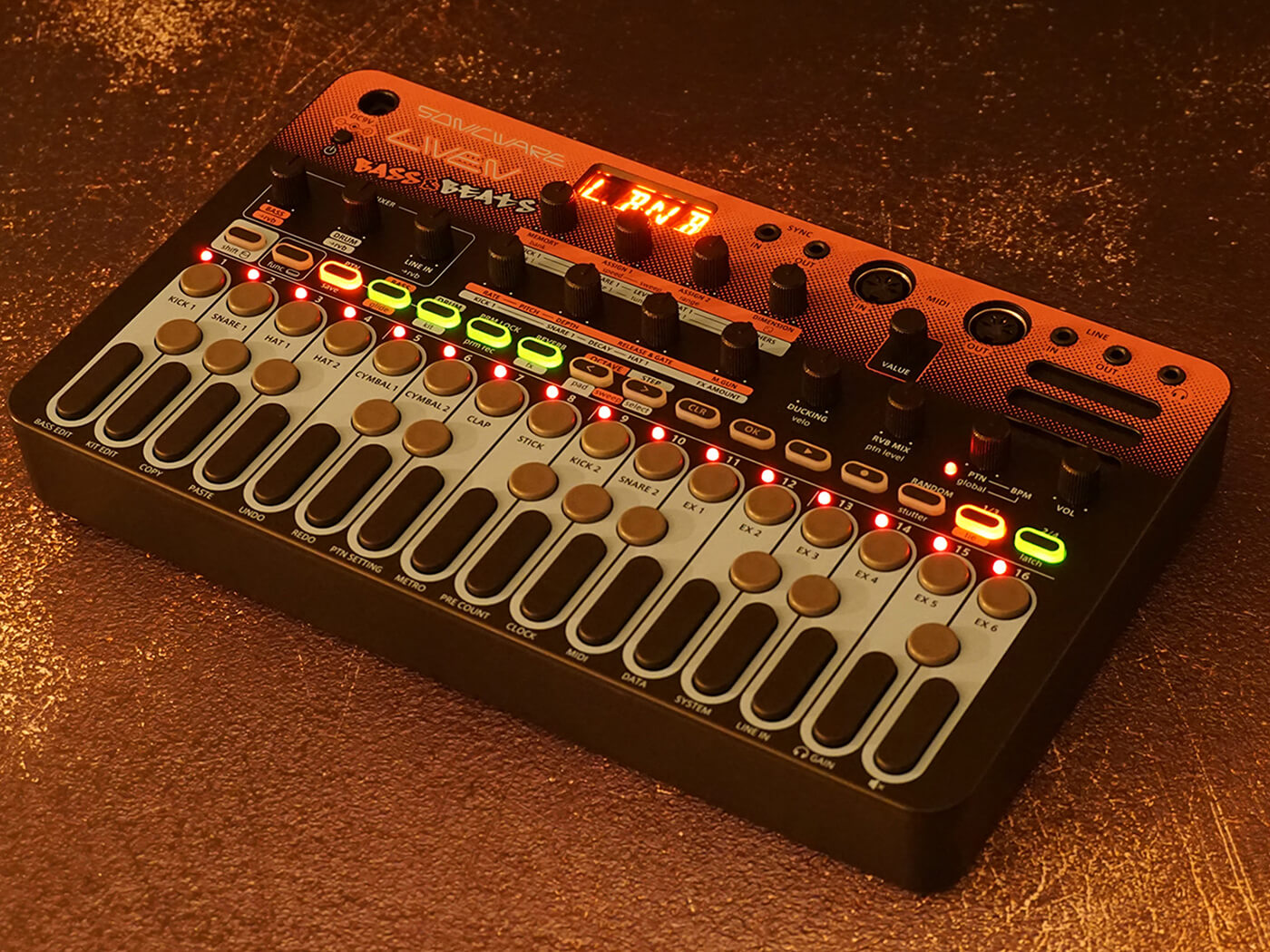 The Bass&Beats’ bass engine is based around a pair of wavetable oscillators with access to 64 wavetables. It also includes a sub-oscillator with a choice of standard subtractive waveforms, and a noise generator. This allows the bass synth to create a range of sounds but the overall sound quality lacks clarity and definition – it’s passable but lacks the grit of Roland’s TB-303 and Novation’s Bass Station.

Over on the drum side, there are 85 kits, each containing 16 samples taken from a library of 511 drum, percussion and SFX samples. You can set the tuning and length of a sample, as well as what Sonicware calls the Slope. The first half of the Slope control’s rotation range adjusts the attack time, the second half adjusts decay.

In other words, you can only ever tweak one or the other. There are some other odd stuff inclusions here too, such as an EQ section whose high-shelf EQ reduces high frequencies when its corner frequency is increased. Whether this was the manufacturer’s intention or an oversight, we can’t say. 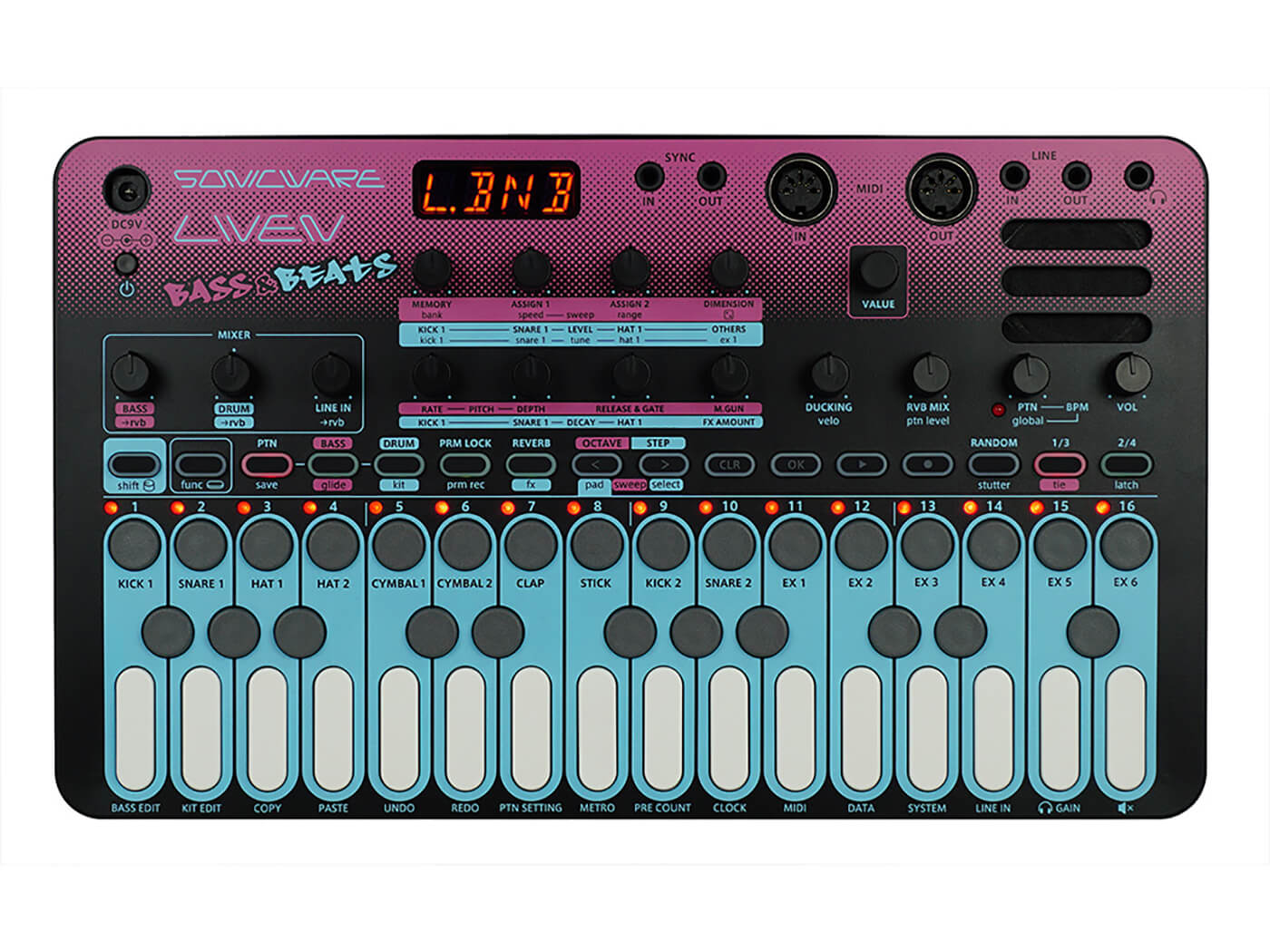 The Bass&Beats’ sequencer can store a total of 128 patterns, each containing up to 64 steps. Patterns can be chained together but there’s no way to save a chain for later use. You can also switch patterns while the sequencer is playing, and the current pattern will complete before the new one starts, which is ideal when jamming.

Only one method of bass step sequencing is available: select the step you want to assign a note to, then press the desired key to set the pitch. This can be awkward if you’re used to the way the TB-303 does it, by moving to the next step each time a note is entered.

Clearing bass notes can be fiddly too, requiring you to press the same note that’s assigned to a step in order to deactivate it. Here, the Bass&Beats assumes you know what that note is, despite giving you no visual indication of it, and no guarantee that the keys will even be operating in an octave range that includes said key. 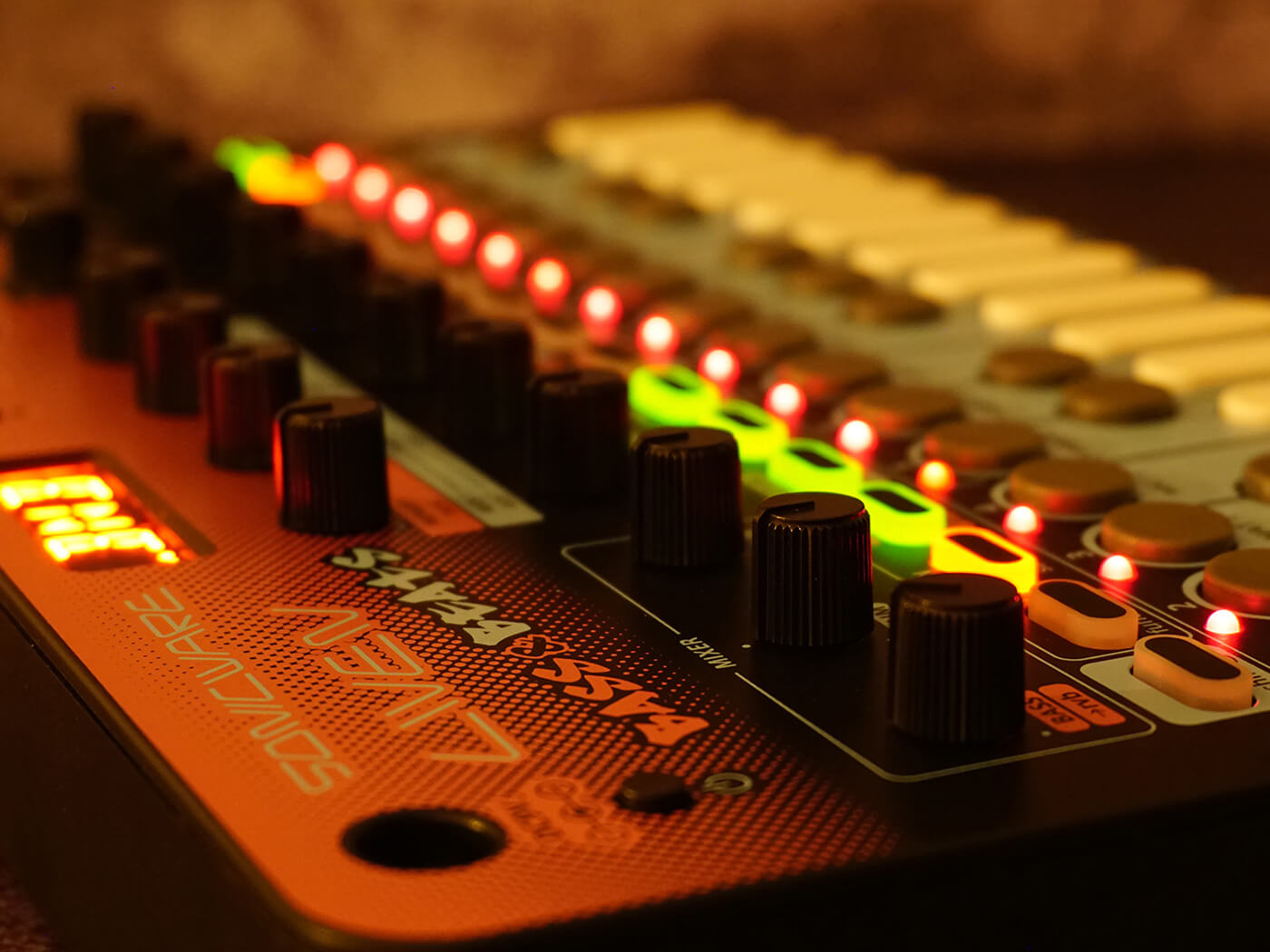 The Bass&Beats’ best feature is its flexible syncing options. The line-in and -out jacks can be used to send and receive audio sync signals (that is, audio signals containing a timing pulse). There’s also a second pair of mini-jack ports for standard SYNC in and out signals, as well as a MIDI I/O pair. The Bass&Beats can provide its own clock signal to all of these outputs simultaneously, or sync to any one input clock while converting that clock and sending it from the other outputs.

As you would expect, the Bass&Beats’ sequencer sends out note data via the MIDI output, so you can drive other MIDI gear with it. But Sonicware have surely missed a trick by not including CV and gate output from at least one of the sequencer’s two tracks.

The Bass&Beats also includes a spring-style reverb and a ducking effect that pulses the volume in time with the beat. But these aren’t game-changing additions – it’s not a real spring and it isn’t a real sidechain-driven ducking effect. They’re just toys.

Ultimately, that’s what the Bass&Beats feels like: a toy. This isn’t necessarily a bad thing, especially given its affordable price. But there’s a fine line between good value and just plain cheap, and the Bass&Beats is teetering on the edge of it. You can make music with it, sure. But it’s not the sort of hands-on organic experience that can make DAWless production such fun.

If anything, the arcane modus operandi, small screen and functional idiosyncrasies only serve as a reminder as to why the music-making world embraced computer-based music production in the first place. 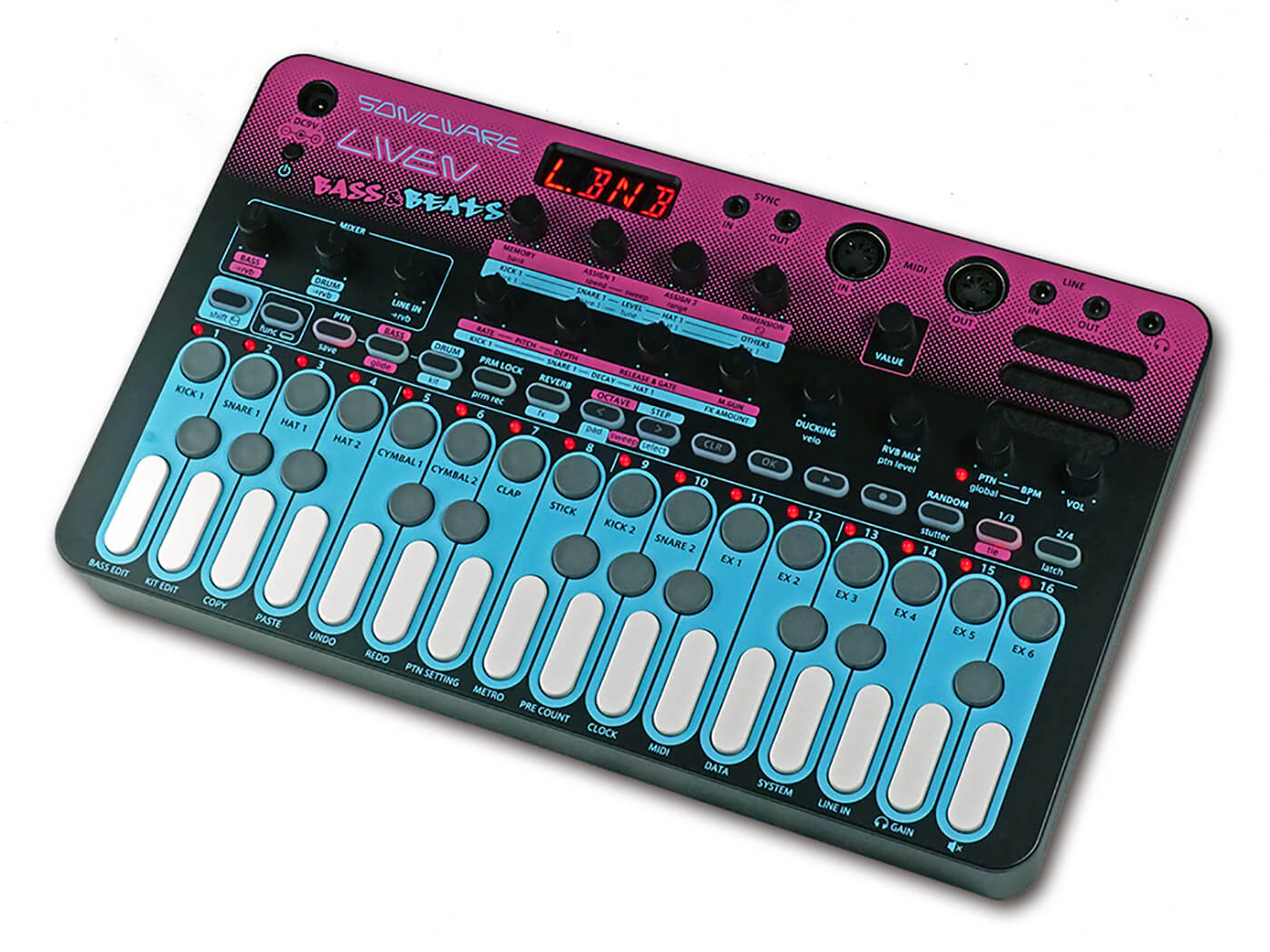