Multi-instrumentalist Andrea Smith takes the portable and powerful instrument across a European tour and reports her (mostly) impressive findings. 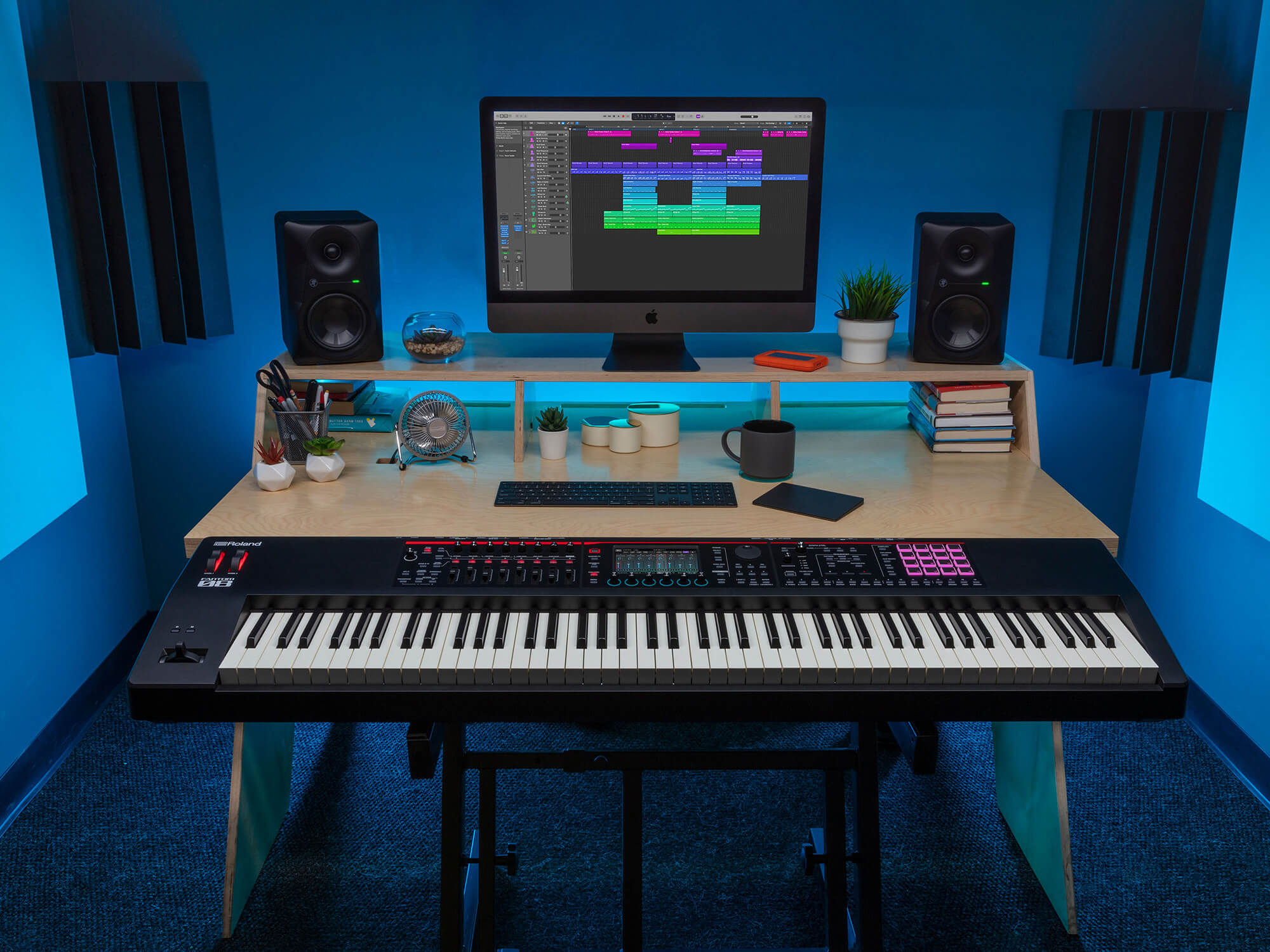 Keyboard workstations: just a lust for old-school tools? Or a bedroom musician’s new best friend? We think Roland’s new Fantom-08 synthesizer is the latter. Gear forums are full of seasoned enthusiasts bemoaning ‘today’s kids and their plugins’ but can you blame them when high-quality hardware costs so much?

Roland’s made many different Fantoms over the years and navigating their differences can get perplexing. The top-of-the-range Fantom-8 will set you back an eye-watering £3,500. The confusingly-named Fantom-08, reviewed here, is a streamlined version of the flagship Fantom-8. It gives you the same hands-on workflow, massive ZenCore synth engine, and rich sequencing and sampling capabilities of its namesake at £1,750 – just under half the price. It’s versatile, packed with massive sounds, and loads of fun to create with. The catch? There’s no one big one, but rather a few little ones that avid piano players, session pros, or studio-heads will likely see as dealbreakers. But it’s a dream come true for a very specific type of musician.

The Fantom-08 might be aimed towards bedroom artists but it holds its own on even the biggest stages. For the past month, we’ve been on the road with one to see how it performs under the pressures of a pop tour.

Sound-wise, ZenCore tech means thousands of pro-level vintage and modern sounds are included. The SuperNatural Acoustic, Acoustic Piano, and Electric Piano engines are incredibly detailed with the strings being a particular standout. You can use the pitch bend lever to achieve realistic orchestral swells and the S1 and S2 assignable switches to quickly and naturally switch between staccato, pizzicato, and tremolo articulations on the same sound. We found ourselves heavily favouring the Fantom-08’s strings over that of the Nord Stage 3, which it’s been sharing the stage with.

For under half the price, you get well over half the performance capability of the flagship Fantom. However, it doesn’t come with Roland’s incredibly detailed V-Piano engine, which keen pianists might find is a dealbreaker.

Physically, the Fantom-08’s weighted keys are just…fine. The keybed and action don’t have the satisfying feel of pricier keyboards like the Nord Stage – and the lack of aftertouch is unfortunate. In fact, the whole keyboard feels slightly toy-like in comparison. The tradeoff is its weight: a mere 14.8kg – every roadie’s dream. 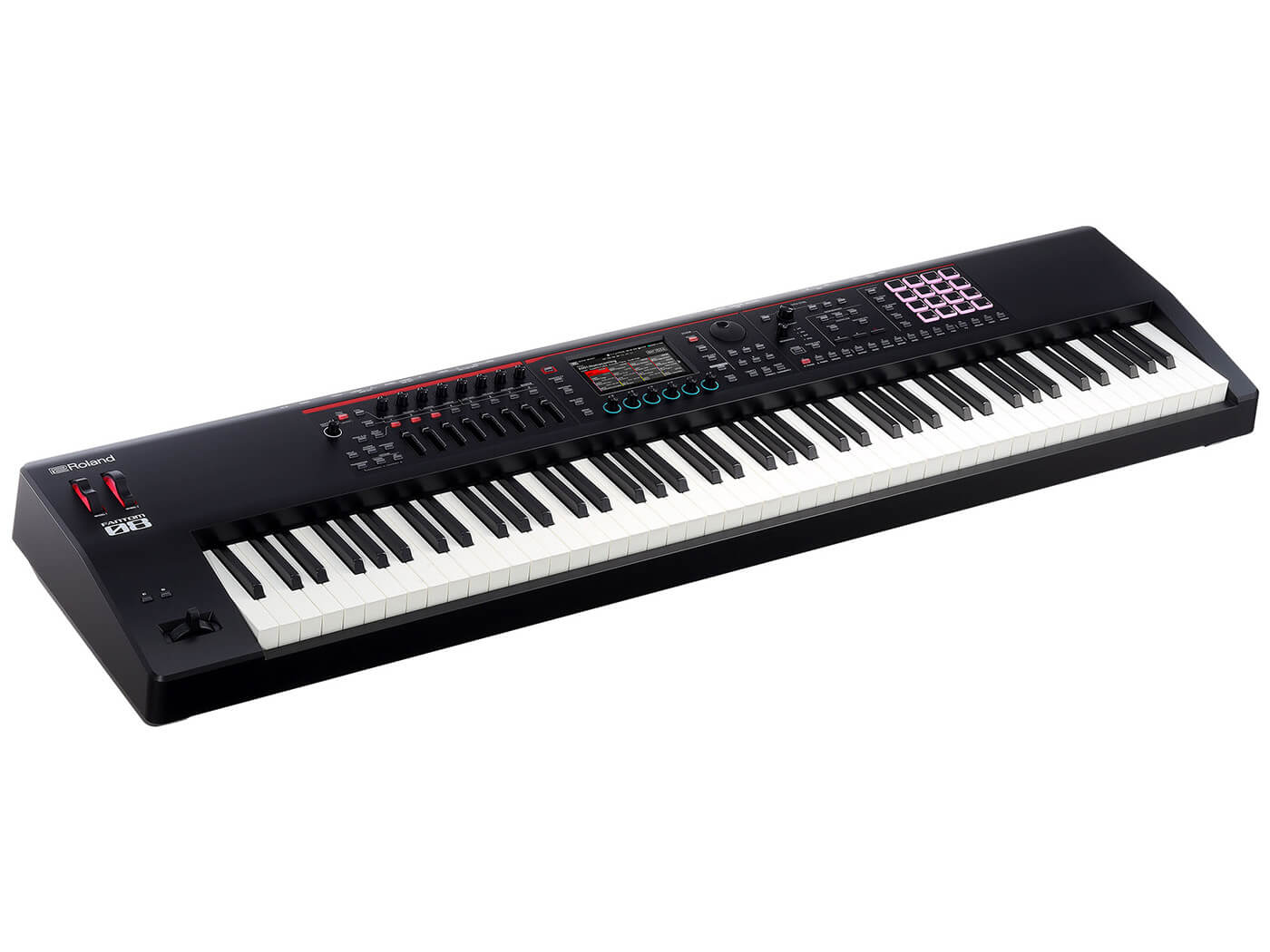 What isn’t dreamy is Roland’s awkward terminology and programming workflow. In place of patches or programs we have ‘Scenes’, instruments are ‘Zones’ and sounds are called ‘Tones’.

This seems like a wonderful idea until you actually try it out. The workflow is choppy and confusing and it’s very easy to save a scene without saving tone edits and vice versa. Also, Scene Remain – which lets you switch between patches seamlessly – is limited to just eight zones on the Fantom-08. This means any scenes with more than eight zones will cut out when you switch between scenes. This is all likely also a dealbreaker for many pros. The flagship Fantom doesn’t have this constraint. 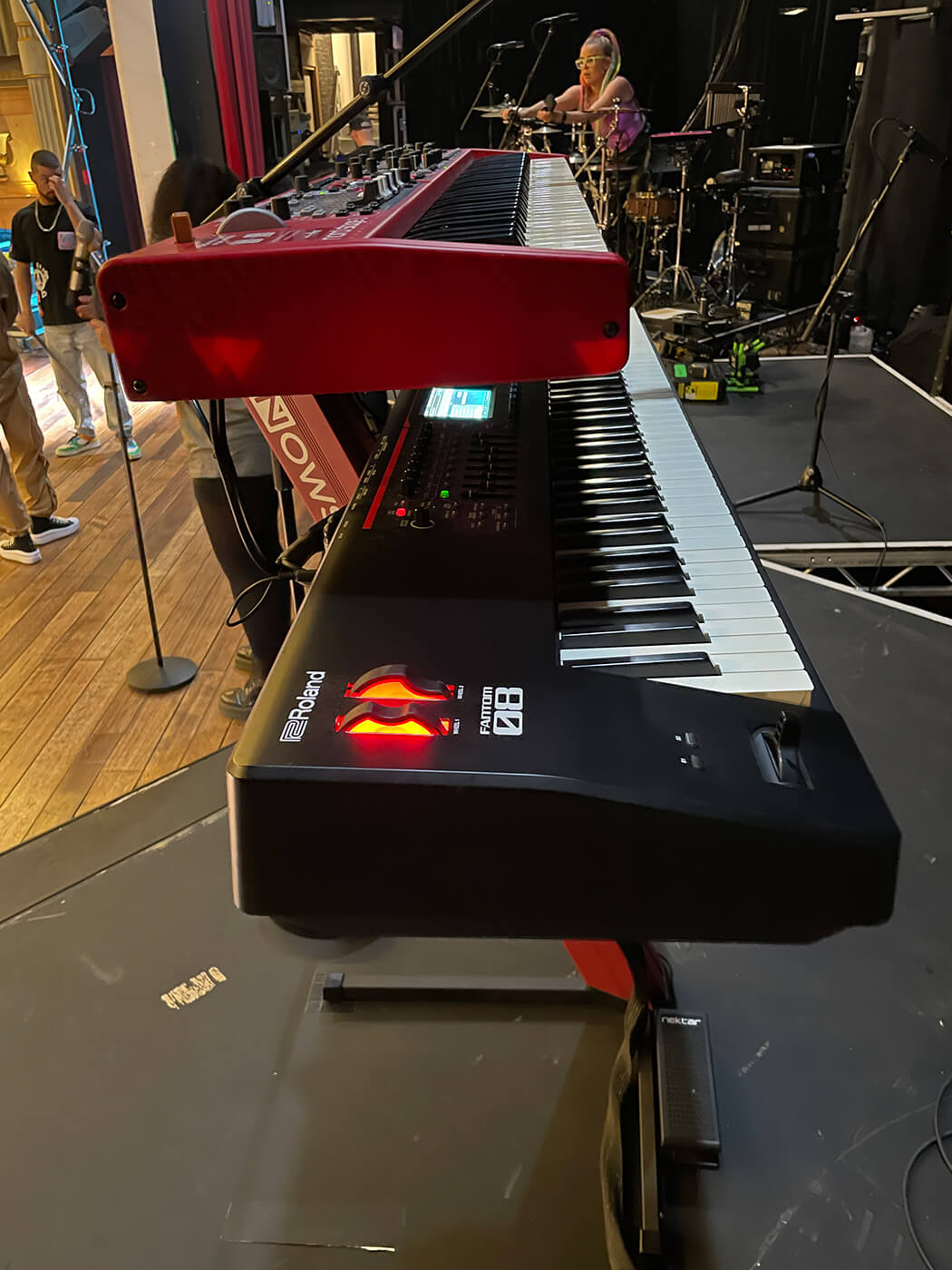 You might be willing to live with these limitations for two reasons: you can effortlessly set keyboard splits at any key; and as a MIDI controller, it’s superb. An external instrument becomes another zone in your scene that you can layer, split, and add effects to – this is Incredibly useful in live performances. And compared to more expensive keyboards, programming MIDI parameters is a breeze.

Workstations as a songwriting and production tool are fairly retro. The Fantom-08’s sequencer embraces this with a nod to the iconic TR-808 drum machine of 1980. You can program the clip sequencer in real-time or step mode using the classic TR-REC pattern sequencer found on those beloved machines. You can then organise your patterns into groups and construct those into full songs – all without touching a mouse. It’s a gratifying way to get inspired and we’re happy to see piano roll editing on-screen as well.

As fun as this is, the complexity, affordability, and screen real-estate of composing on your computer is just too alluring. However, for gigging producers, Fantom-08 can be the ultimate life hack. The built-in audio interface and DAW integration with Logic Pro, Mainstage and Ableton Live aren’t exactly revolutionary in the studio, but it’s a gamechanger on stage. No more balancing a laptop on a music stand that’s blocking your view of the crowd. 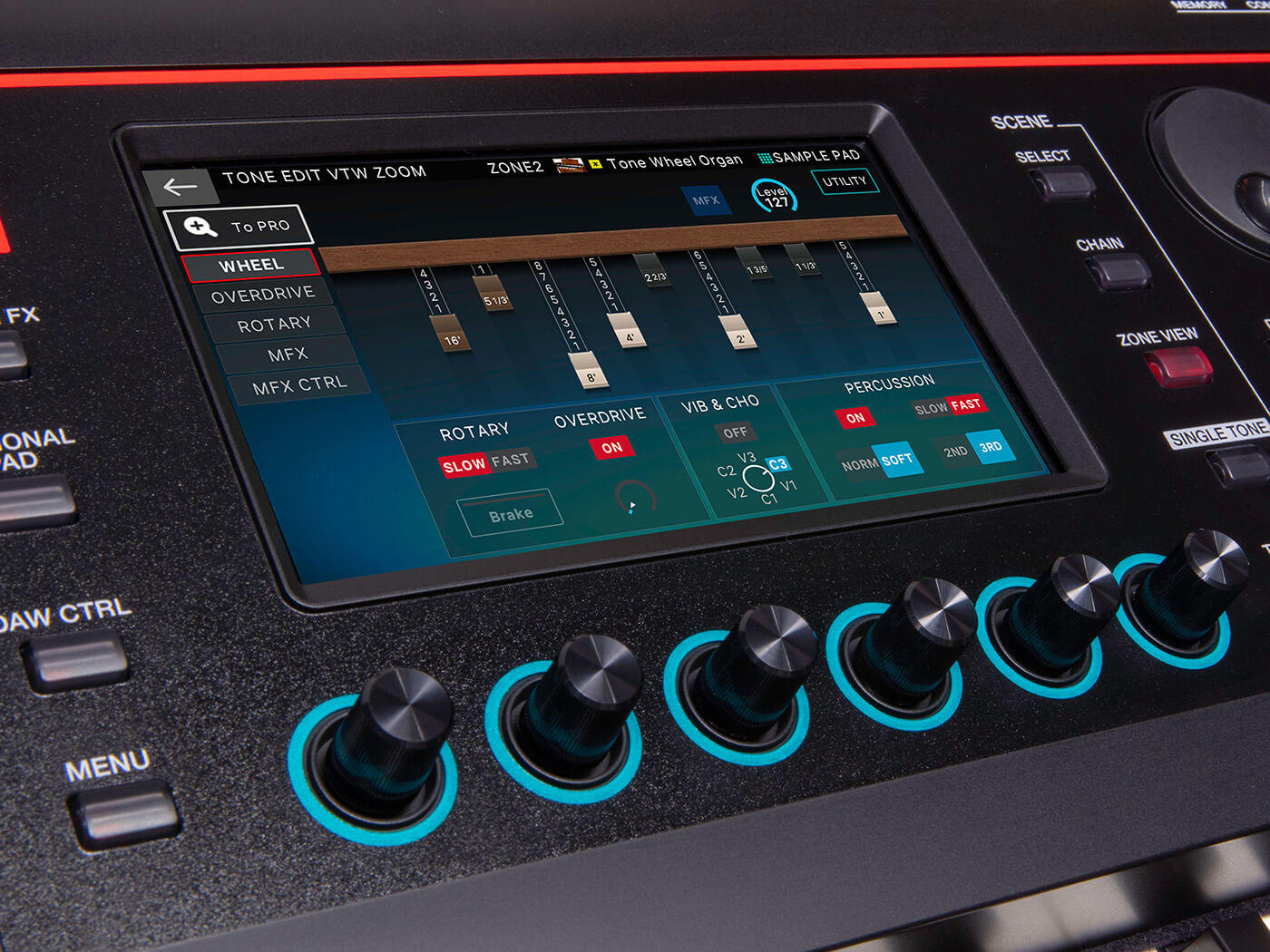 The Fantom-08’s touchscreen is a discreet way to run your backing tracks and control your DAW while performing. Advanced output routing means you can send a click and tracks to your monitors and route your performance and tracks to the house, all using the keyboard’s interface. Plug into the mic input and use Fantom-08’s effects on your vocals; add in the 32-band stereo vocoder and DIY electro-heads will swoon. Ironically enough, the Fantom-08 doesn’t have phantom power so dynamic mics only and it’s a quarter-inch mic input, not an XLR which is frustrating.

Electronic artists and budding pop session players will get tons of value from the sampler section. Want to ditch the laptop completely? Upload your backing tracks and samples – up to 60 minutes or 2GB worth – and trigger them live with the 16 pads. You can also record directly to the pads using onboard sounds, your DAW, or the mic input. Capture or import to the keyboard multisampler for an instantly-pitched custom sound that you can manipulate just like the onboard tones. The options here are limitless.

With the Fantom-0 series, Roland’s set out to give wider access to its famed Fantom workstation. The Japanese brand definitely delivers. Seasoned pros might baulk at what it’s lacking compared to its namesake – aftertouch being an especially emotional trigger point for many – but the Fantom-8’s £3,500 price makes it an extravagant luxury for bedroom artists. Based on what the smaller, lighter, Fantom-08 brings to the table for the jack-of-all-trades musicians that today’s industry is shifting towards, at £1,750 it’s an absolute steal.