Jono Buchanan plugs in compact versions of the synth that brought back sliders and a mid-80s classic which needed a separate programmer to prevent button-pressing RSI. 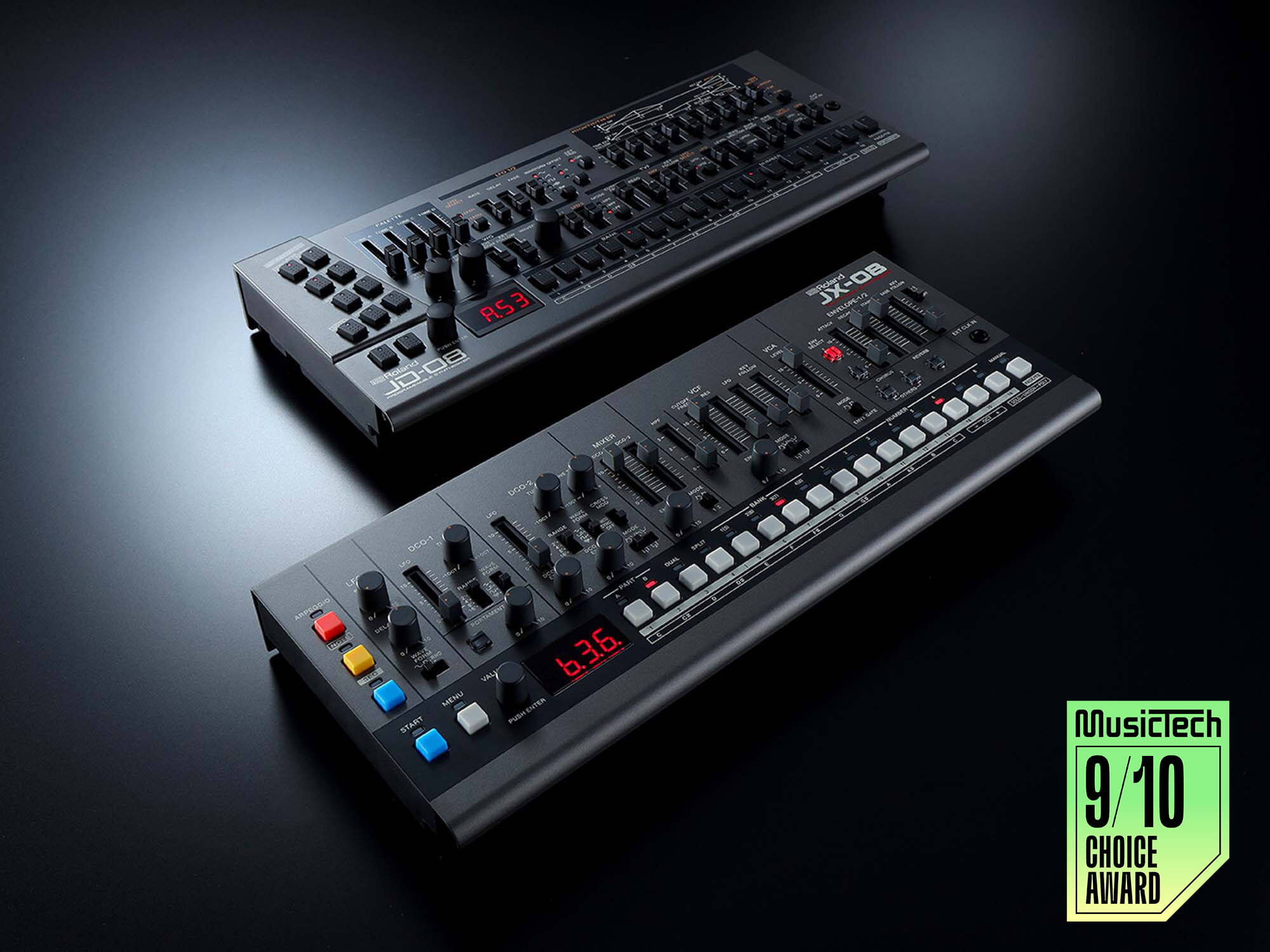 ⊕ Great sound, highly redolent of the original synths
⊕ Hugely power Arpeggiator and Sequencer options
⊕ Despite the minimal frame, both are awash with realtime tweakability
⊕ Clockable via MIDI or dedicated Clock inputs

⊖ Some functions are fiddly at first; particularly in the Sequencer sections
⊖ LED display data is sometimes too cryptic

Roland’s Boutique series shows no signs of fatigue. Offering the sound engines of some of Roland’s most iconic synths along with arpeggiators, powerful sequencers, incredible portability and low-cost, the Boutiques are turning heads. Roland’s two newest releases, the JD-08 and JX–08, are compact re-issues of an early 1990s classic, the JD-800, and a mid-1980s analogue/digital hybrid, the JX-8P.

Roland’s JD-800 doesn’t always get the credit it deserves. Ask a synth enthusiast for Roland’s most notable synths of all time and only devotees of this early 90s monster would mention it before Roland’s Juno, Jupiter, SH models. But without the JD-800, the return to tactile, slider-heavy synth programming might have been postponed for several more years.

Its huge, deep front panel put synth programmers back in touch with the controls they needed to make original sounds. Synth manufacturers have never really gone back to the ‘soft key’ days of burying parameters under the weight of menus. Roland’s decision to turn the JD-800’s user interface into a Boutique modules is bold – how to fit all of the features into a panel measuring six by 12 inches? More importantly, has Roland successfully brought an early 90s classic into the 21st Century? 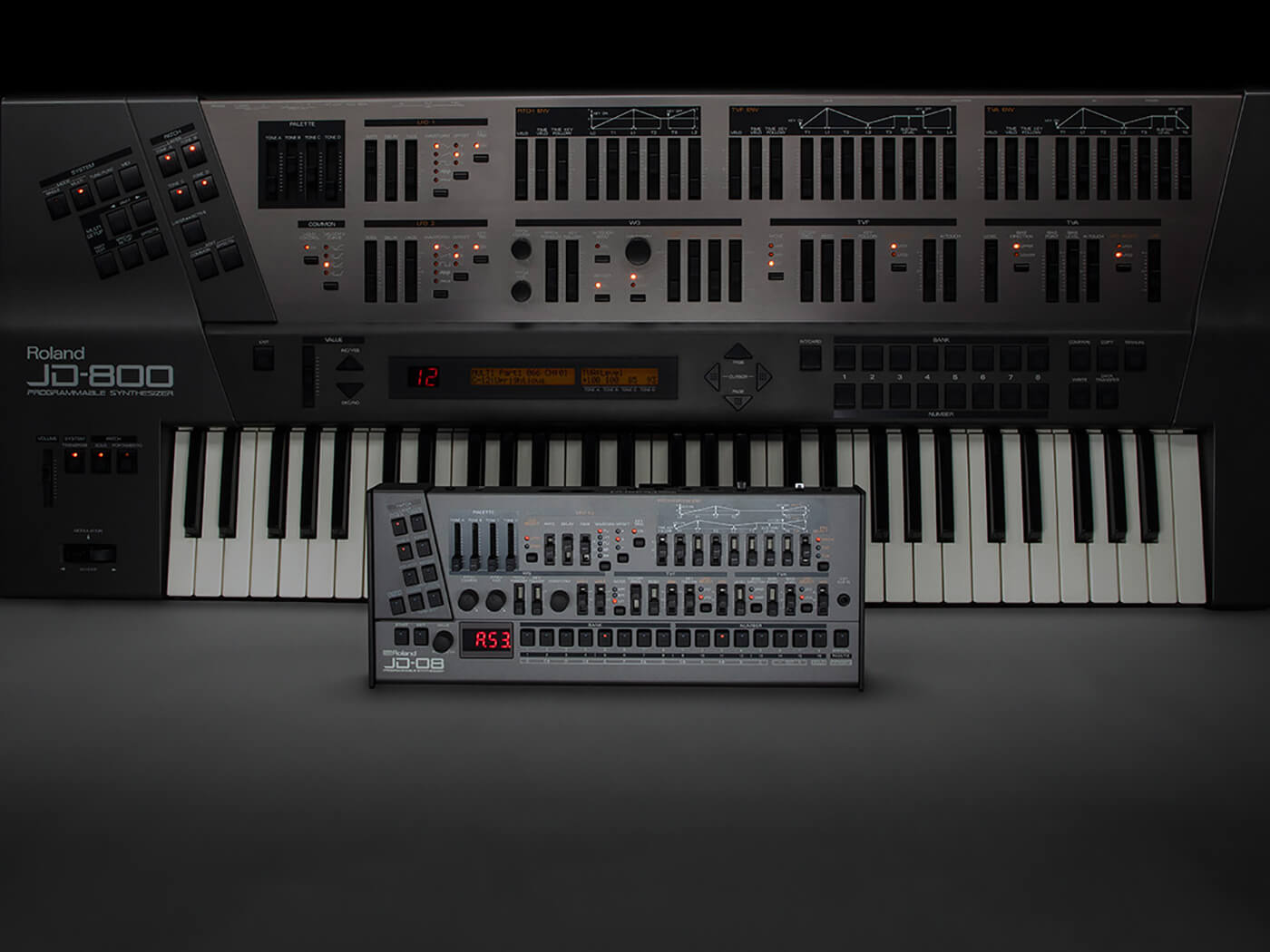 The four-voice architecture of the JD-800 is ported to the JD-08, including 64 of the original’s presets, 108 waveforms and the two-part multi-effects capabilities. Beyond that, there are new presets within a total of 256 memory locations for your sounds, alongside Boutique standard features such as External Clock In to sync the JD-08 to other modules in the series.

Each Patch has a four-voice structure with Layers selected on the left-hand side, before a Waveform dial in the Wave Generator (WG) section lets you assign sounds per tone. Most space is saved by offering a sole set of envelope controls in the top-right portion, with a toggle switch below dictating whether you’re adjusting settings for the pitch, filter or amp sections.

Two LFOs are similarly selectable before the JD–08’s key Boutique features; not just an arpeggiator, but a clock-able step sequencer that can be programmed note-by-note or in real-time. The Palette sliders at the top let you control a whole range of functions on the fly, such as the level between tones, thereby acting as a kind of miniature mixer. 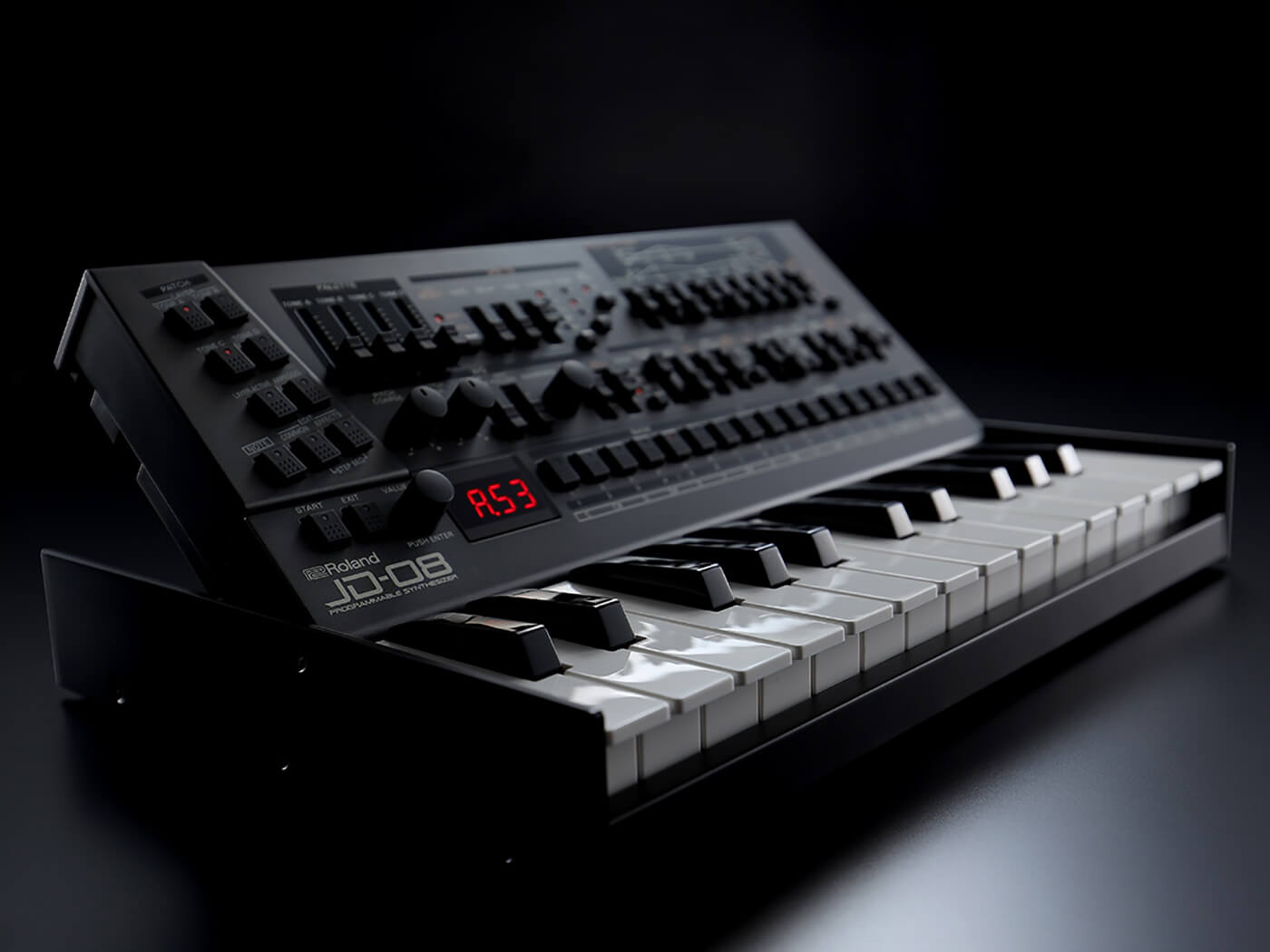 The JD-08 lets you run two layers of sound at once with independent sequences, although you’ll need to read the manual extensively to understand the JD-08’s capabilities in this area. As the two Layers of a sequence can play separate patterns, toggling between them then choosing which steps of a sequence are active, and then assigning notes and data lanes is quite taxing on both brain and digits until you understand how Roland have organised things. But the sound is crisp, open, bright, rich and detailed. It’s easy to forget just how diverse an instrument the JD-800 was and to be reminded, via the JD-08, is rather wonderful. 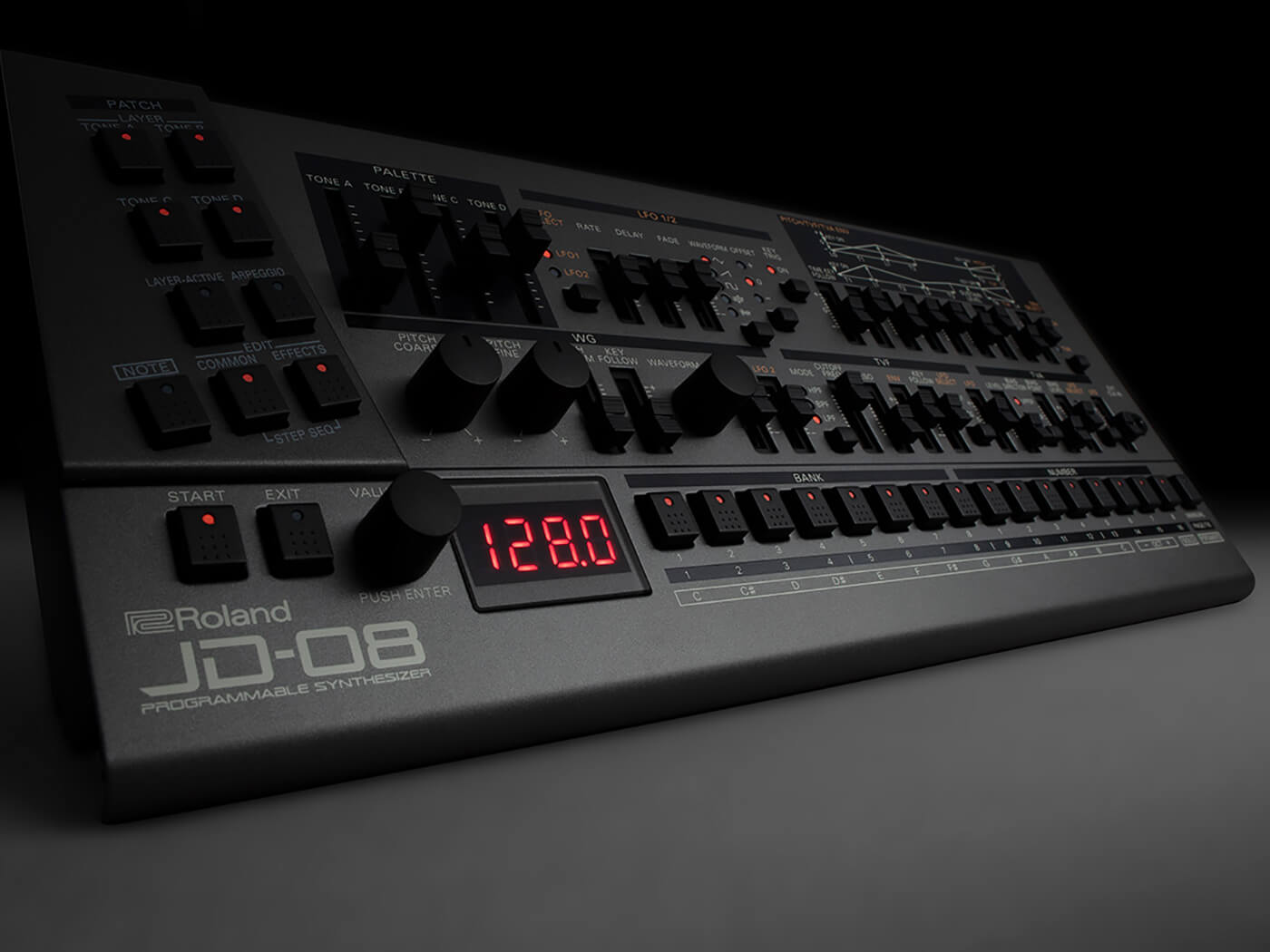 Whereas the JD-800 was a slider-laden behemoth, 1985’s JX-8P was the opposite – a sleek, button-heavy powerhouse that required the PG-800 Programmer to offer its fullest capabilities via a tactile control surface. Fortunately, the JX-08 Boutique module offers a combination of both in one instrument, easily allowing you to program sounds from the front panel. Two digitally-controlled oscillators get the ball rolling, each with waveform selection options, LFO amount, Range and Tuning dials, as well as cross-modulation between the sound sources. A mixer section provides blend between the two, as well as envelope control over output levels. 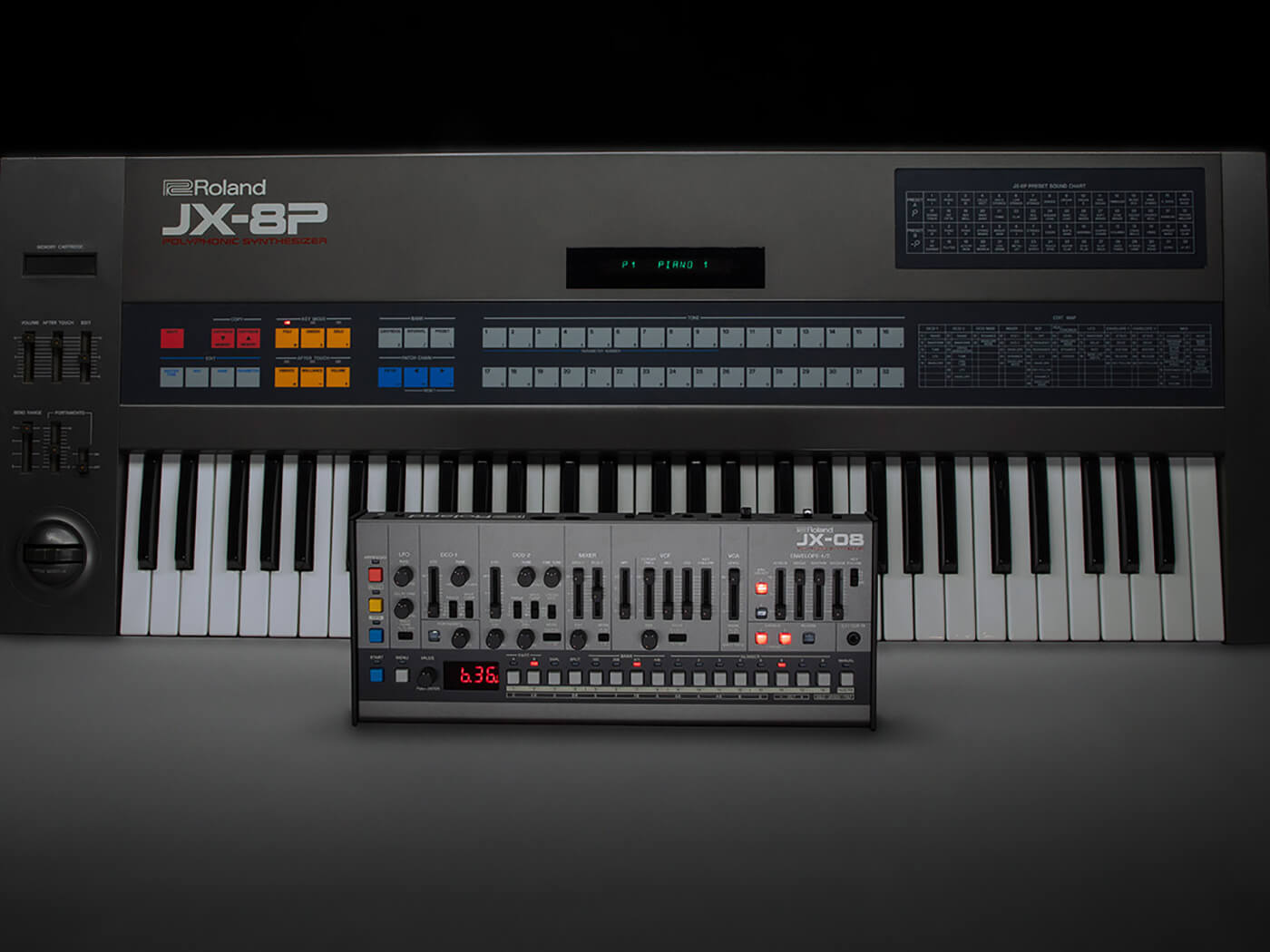 Speaking of Envelopes, there are two, and the filter section offers a Juno-style high-pass filter, as well as a resonant low-pass, with LFO and envelope modulation. There are two Layers to any sound, which can be played simultaneously across the keyboard (Dual), or in Split mode, if you prefer one sound for left and right hands. Arpeggiator and sequencer modes are included as you’d hope, again with substantial manual referencing required to extract maximum value.

The JX-8P is revered for its strings, brass and well-rounded rich, full pads and those are showcased beautifully here. It’s a joy to introduce rapid, random LFO movement into the DCO and/or filter sections, to produce flickering variations to sustained sounds, whilst compelling, ambient patterns are to be found in abundance as you flick through sequencer options. 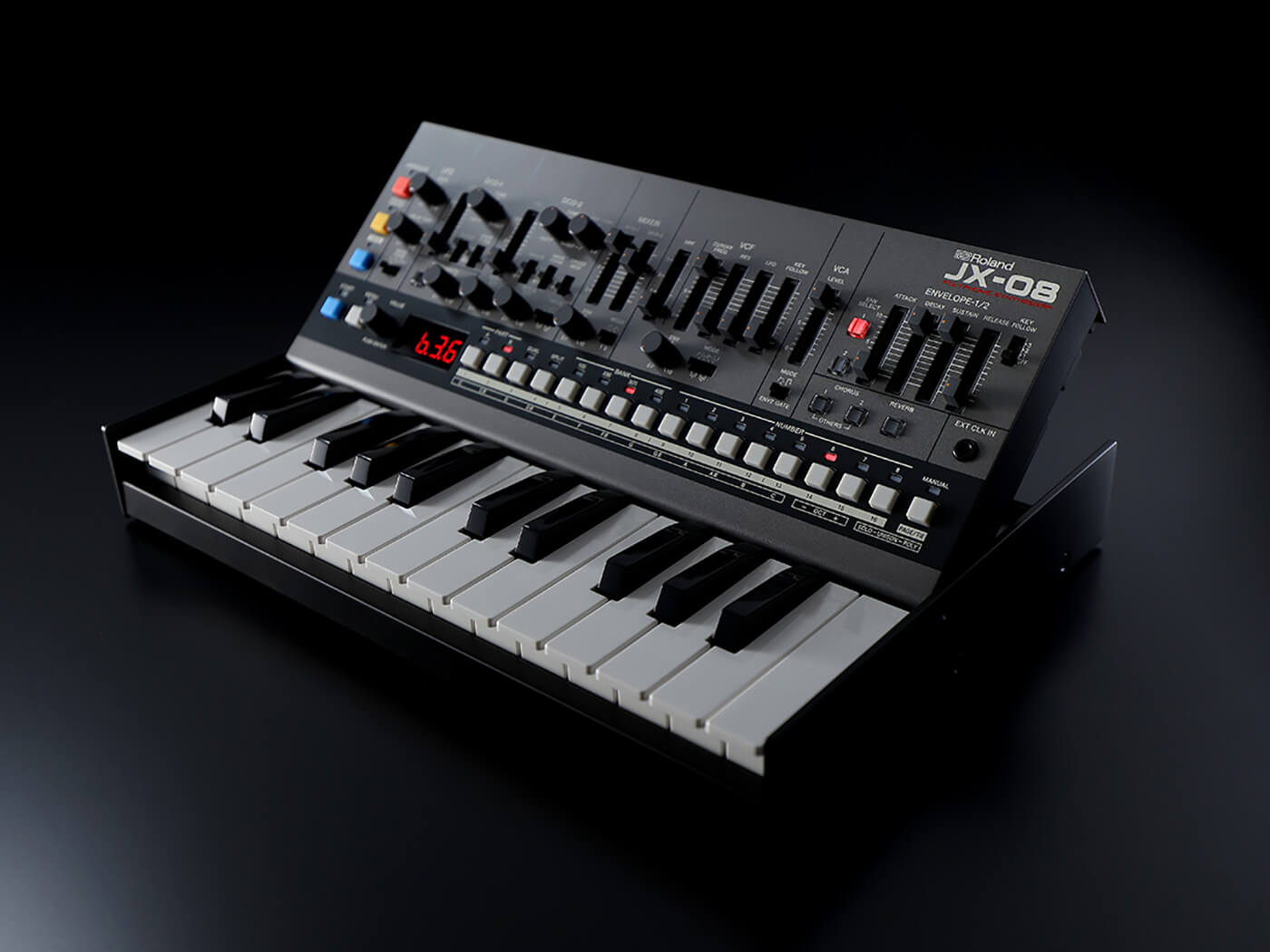 Both modules offer an awful lot for their price. As always with Roland’s Boutiques, the sound engines are compelling, providing a modern vision of some classic instruments. But their only drawback is functionality versus size; packing this much potential into such a slender frame inevitably means flicking between modes. Using the numeric buttons for several functions (at the same time, if you’re programming sequences and triggering notes) is fine, and the four-segment LEDs do their best to keep you abreast of the current parameter or mode but, at least initially, deeper functionality may leave you scratching your head as you reach for the manual again.

However, perseverance is rewarded. Both of these modules are welcome additions to an ever-growing range of really compelling synthesisers. Don’t be fooled by the onboard speaker, compact frame and portability; these are far from being toys. They’re excellent, entertaining and highly capable synths that sound fantastic. If we had to choose one? For us, it’s the JX-8P. But if Roland conveniently forgot that they’d sent us both for review, that would be even better. 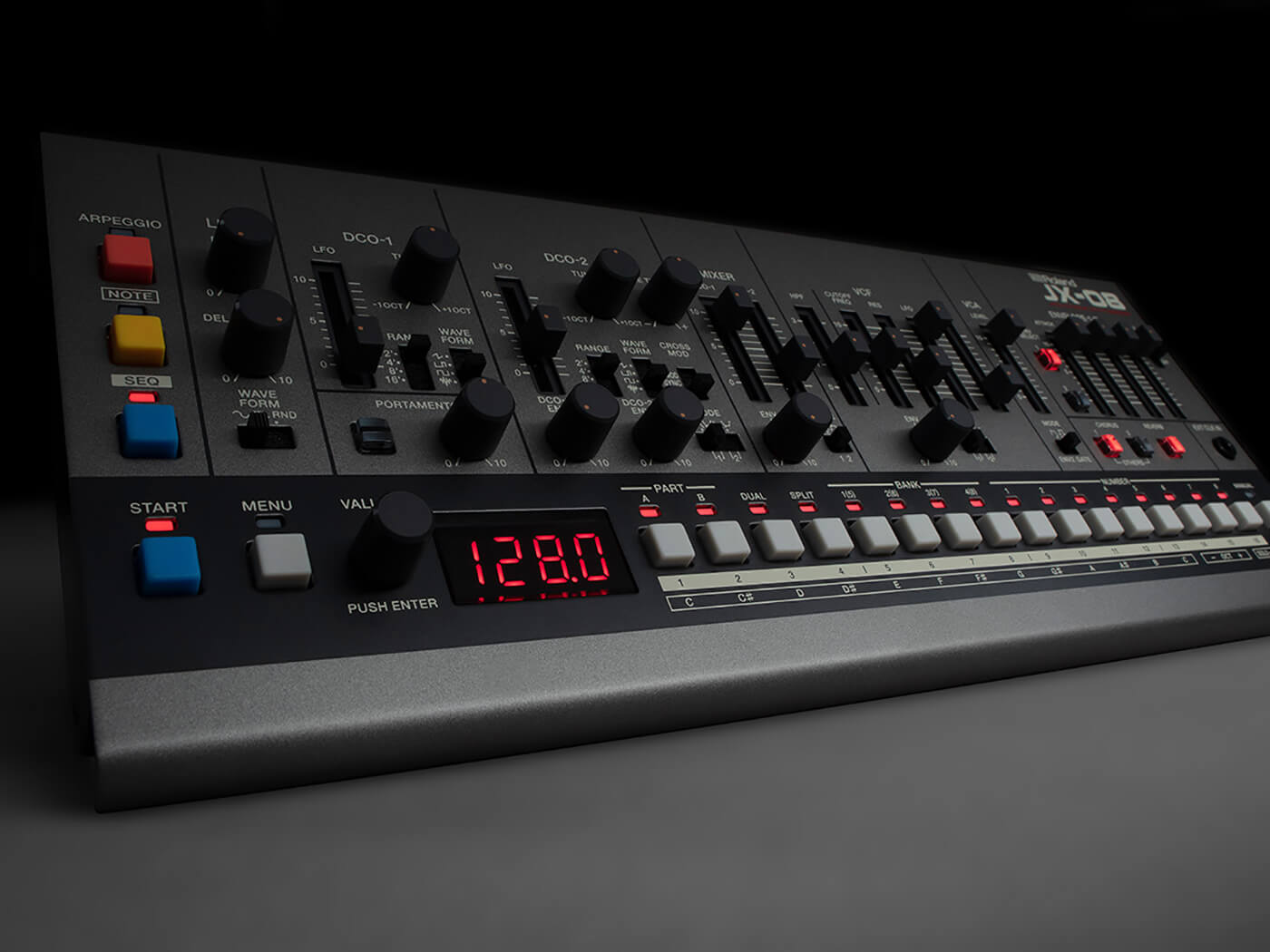