In designing the ideal budget drum machine, Roland created a cult classic. Now the company has gone retrofuturistic to give the original 606 a Drumatix Boutique makeover 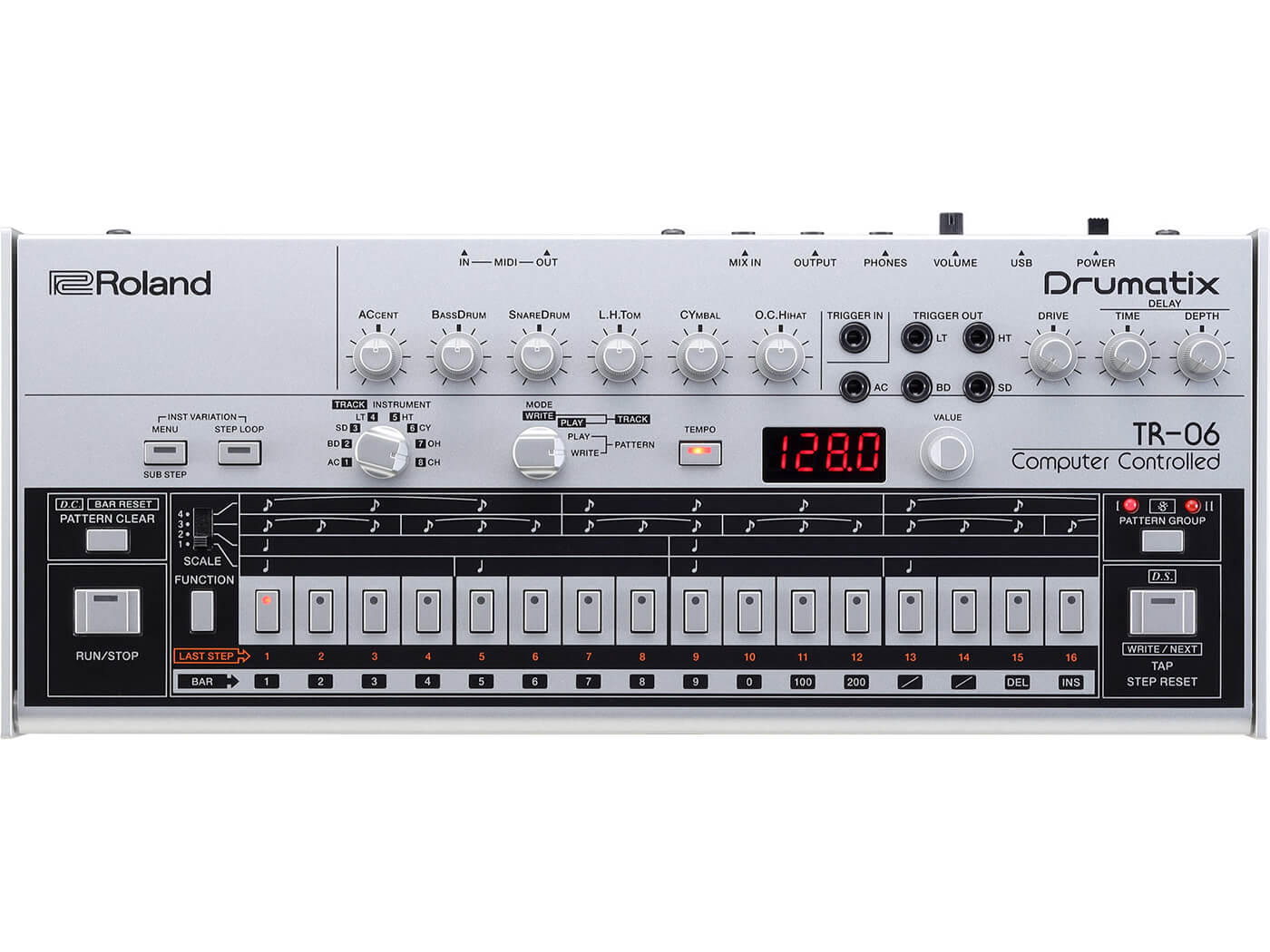 It’s difficult to overstate the role that Roland played in the development of both music technology and the sound of music production. However, during the 1980s, Roland’s analogue drum machines lost out to digital rivals. That left bedroom producers to trawl second-hand adverts for discarded bargains. The TR-606 is a case in point. Like its TB-303, TR-808 and TR-909 siblings, it was a commercial flop. Now this cult classic has been resurrected in Roland’s miniature desktop Boutique format, in a package that nods to the past but engages with the future.

Back on the block

The new TR-06 lends itself beautifully to Boutique sizing, with its new dock allowing for two angles of working. Tilting to 45 degrees will also help expose the in-built mono speaker, although this won’t help you get any sense of the frequency scale due to its fairly limited response. The build quality is excellent across the board, with trustworthy pots and buttons that are also highly responsive. MIDI-in and MIDI-out is available via conventional sockets, while MIDI and audio may also be transmitted over the micro USB connection, which can also power the device. Four AA batteries are included, should you wish for more mobility.

Thanks to the mix input on the rear, you can send an additional stereo signal into the TR-06, which allows you to exploit it as a basic audio interface within your DAW.

Being seasoned 606 devotees, we are slightly disappointed to find that Roland continues to situate a spindle-based volume control on the rear of this Boutique unit. It’s tricky to adjust in this location and at odds with the original synth, on which a large pot was employed for volume as well as power cycling.

The TR-06 lends itself to standalone playback but is fully equipped to synchronise over MIDI too. With a foot in the past and the future, there are five trigger outputs on the front panel, and a trigger input that provides reliable syncing to a clock pulse. 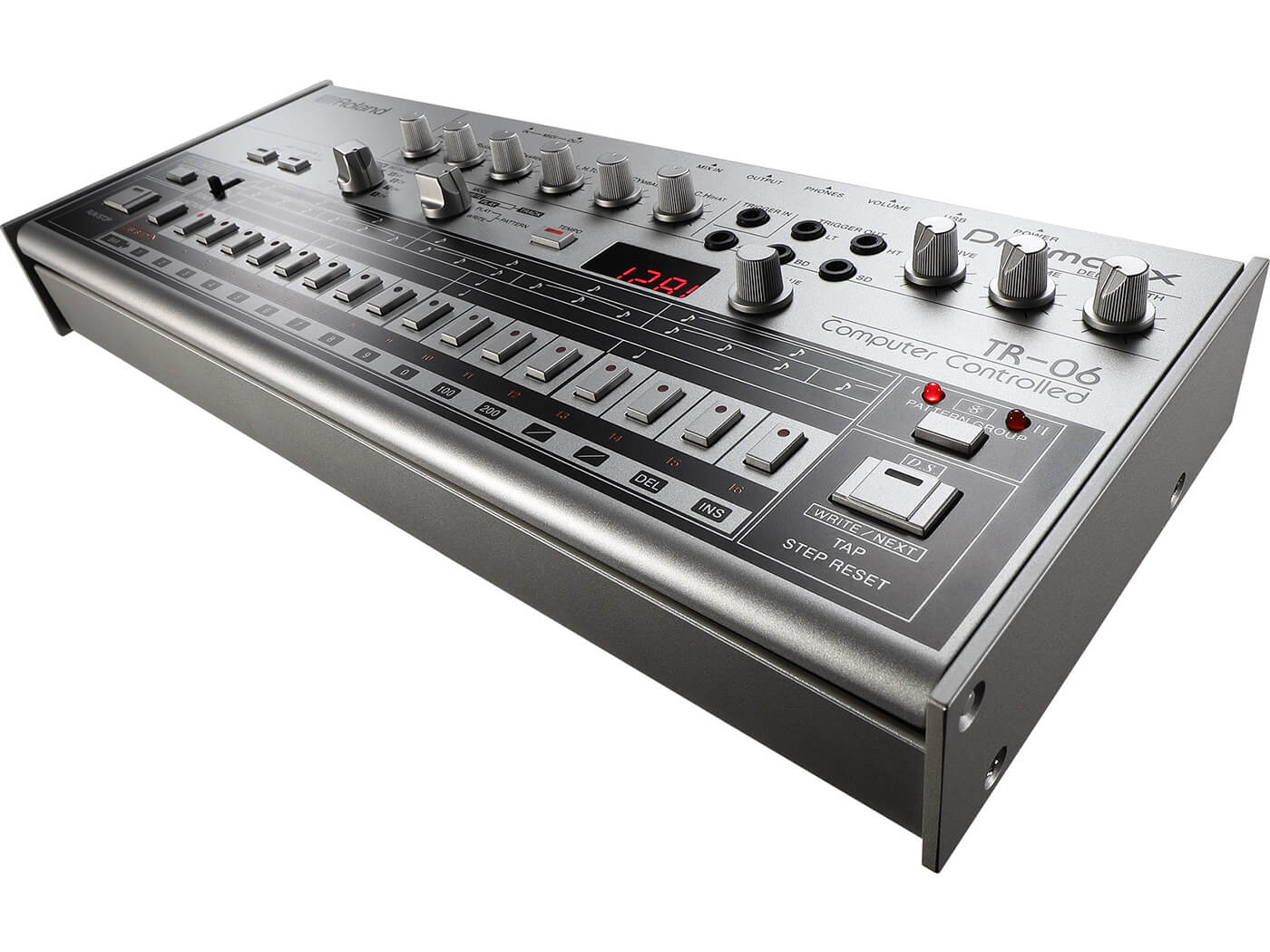 The TR-06 relies on Roland’s Analog Circuit Behaviour modelling technology. Given that all analogue technology sounds different, especially as age degrades its original components, the reliability of this digital construct means that no warm-up time is required and that it always sounds the same. When Roland mirrors devices of this kind, it listens to old machines in order to strike the right balance of tonal accuracy. It’s hardly surprising that we notice some small differences in the sounds as we test our original 606 against this ACB reincarnation. This is most striking in the hi-hats, where the ripple of distortion running through our old machine sounds weightier than those offered on the new Boutique unit. The new TR-06 sounds good and exacting, just not so decayed by age.

Where things change from the original is with the ability to edit and alter the 606 sounds. While the original machine only offered a single mono output, the TR-06 features full stereo output via mini-jack, letting you pan each sound. The editing capacity goes further, with embellishments geared toward specific sounds, harking back to the more elaborate machines of the 1980s. You can now tune the kick drum, as well as control its attack and decay phases, to create booming hits. The new snare drum allows for control of the decay phase with the much-used Snappy tone control, a staple on the 808 and 909 but not the original 606.

The hi-hats can now link the closed and open sounds, meaning that the closed element will be ignored if an open hi-hat is present. The original unit was unique in this area, as the two sounds could be programmed to play simultaneously, producing a choked effect. This is still possible but you’ll have to disable this link. 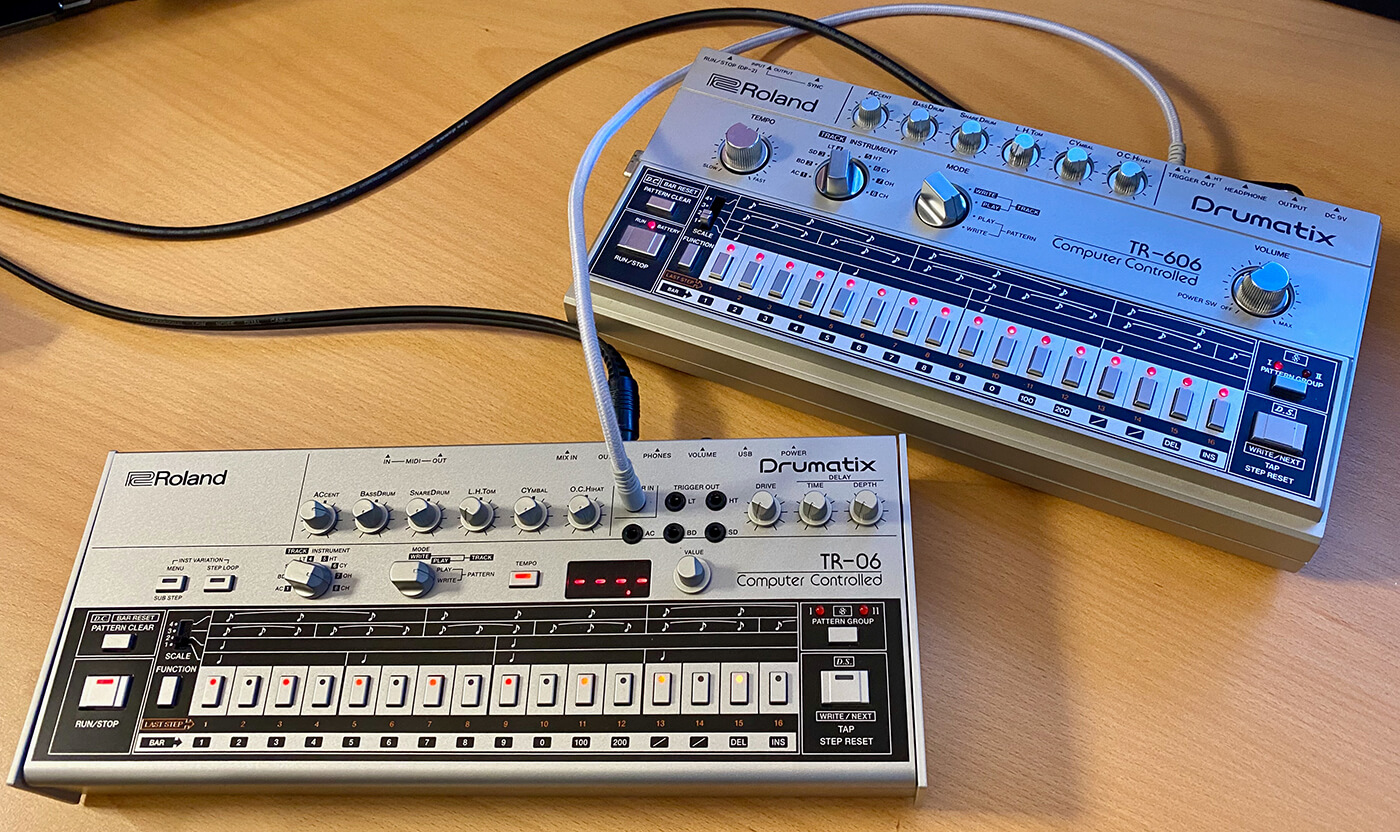 Roland has also added provision for swapping out all of the onboard timbres, except for the hi-hat. The kick and snare drums sport Rich and Fat variations, which have a reassuringly familiar feel influenced by other Roland drum machines. The toms and cymbal, meanwhile, can be swapped for synth toms, clap and rim shot sounds.

The original 606 was one of the easiest drum machines to program and it’s easy to get going here too, thanks to the 16 step buttons. Select a sound, press a step and you’re off. While in Pattern Write mode, the sequencer has to be running in order for you to hear step entries. The process is immediate but there’s no capacity to program outside of the play mode. Patterns can be alternated between pattern groups one and two, extending the step range to 32 steps.

Roland has also introduced flams and ratcheting at the step and instrument levels, which makes light work of programming trap-style patterns. There’s also a live Mute mode that can immediately silence instruments, useful for modular users, especially when coupled with the five onboard trigger outputs.

In line with other Boutique units, Roland has also included a series of backend effects that include delay, distortion and bitcrusher, controllable via three dedicated pots.

The TR-06 is close in size to the original unit, and the interface is just as nicely proportioned. With MIDI in play, there’s now velocity control of each sound, though it’s limited to 10 levels. Velocities can also be programmed via the sequencer.

It’s unfair to think of the TR-06 as merely a clone of the original 606. It boasts all the charm of Roland’s classic box but extends its capabilities, as appealing as a vintage throwback as it is a future-facing Eurorack-friendly production unit. There’s little not to like.