What happens when analogue meets digital, sequencer meets synth and Greece’s Dreadbox meet Poland’s Polyend? Time to stare into the eyes of Medusa… 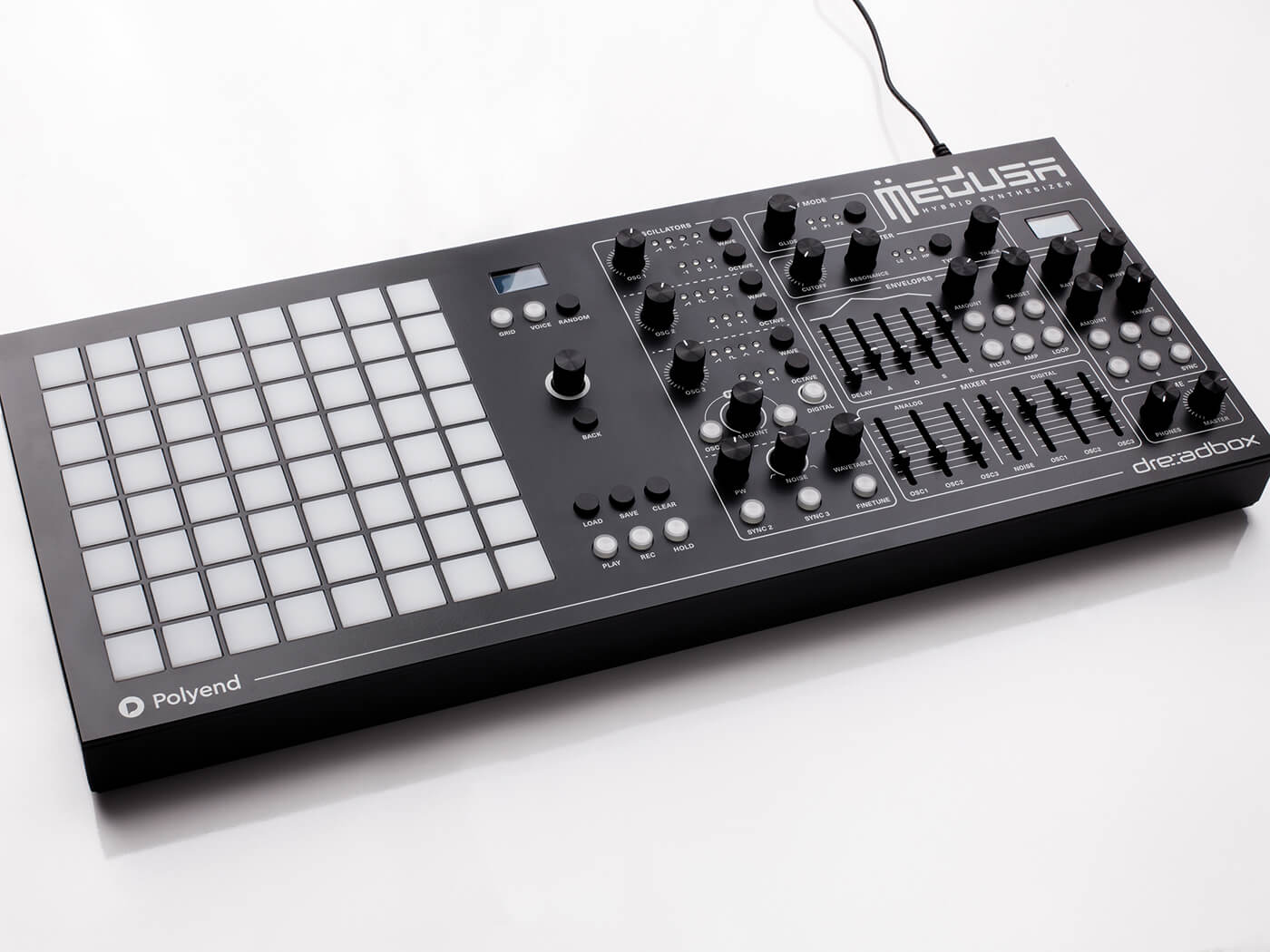 Two years in the making, the Medusa is a collaborative effort between Polish sequencer specialist Polyend and Greek synth god Dreadbox. Previous products such as the Erebus and Hades have won fans for their killer analogue sound and reasonable prices.

So what exactly is the Medusa? Depending on how you look at it, it’s a synth with a sequencer attached or a sequencer with a synth built in. Either way, it’s actually been designed from the ground up as a cohesive instrument rather than simply fusing together existing models from the two brands.

Our first glimpse of the Medusa came way back in July 2017, although the synth Dreadbox showed off was significantly different to the finished product. That initial prototype was a much simpler monophonic synth, all analogue, with a very basic sequencer/arpeggiator added courtesy of Polyend. As Polyend put it: “At first, there was a desire to add a simple sequencer and preset functionality to the famous Dreadbox analogue synthesizer. But as the more you have, the more you want, this liaison grew up to something utterly unique and totally different than initially planned.”

The released version of the Medusa we see here is a monophonic/paraphonic hybrid synth combining analogue oscillators with digital wavetable options, and the sequencer has expanded to a much more elaborate affair which includes an 8×8 grid of touch-sensitive pads (sadly the arpeggiator seems to have gone missing along the way). 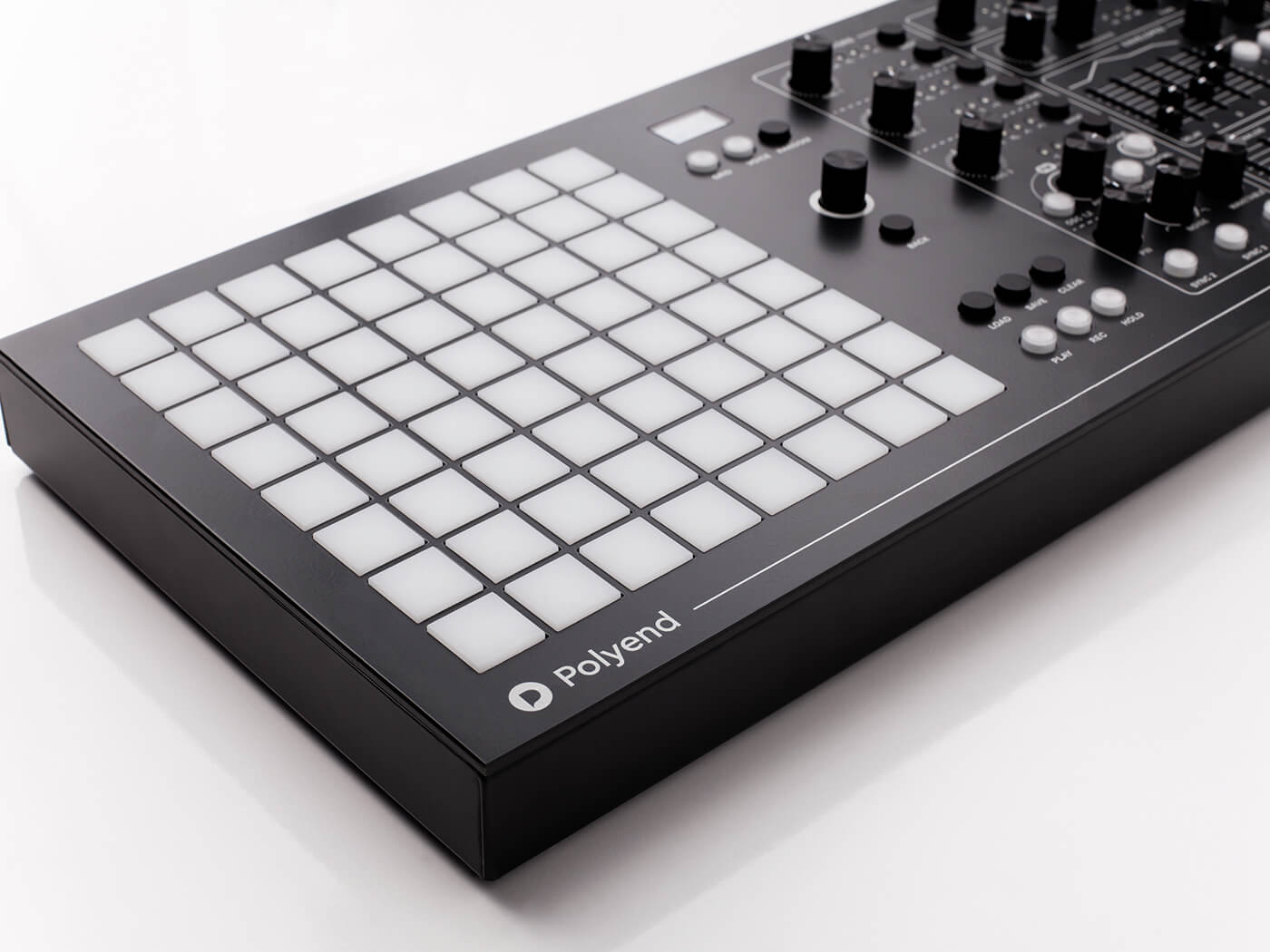 Right out of the box, the first thing that strikes you is the excellent build quality, easily on a par with more established manufacturers. The metal enclosure is reassuringly solid, while the buttons, faders and rotary pots all have good actions and feel sturdy. Overall, the build quality is excellent. The all-in-one format lends itself to live performance, and the Medusa certainly feels durable enough for this. It’s worth noting at this point that the Medusa has just been updated to firmware version 2.0, which increases its capabilities from the firmware shipped with the initial units released late last year. Notably, the wavetable section has been completely overhauled and the sequencer has been improved substantially.

Taking on the synthesis side of things first, it’s a fairly rich synth architecture based around three analogue oscillators and three digital (wavetable) oscillators, plus a noise source and a single voltage-controlled filter. One area where the Medusa treads an unusual path is in its approach to polyphony, combining these six oscillators and one VCF to create different setups. At the top of the unit you’ll find a Play Mode button to toggle between M, P1 and P2 modes, where M is monophonic with all six oscillators for one voice and P1 is a relatively conventional three-voice paraphonic approach with the oscillators paired up (one analogue and one digital per voice). P2 is a six-voice paraphonic mode, in which the three analogue oscillators and three digital oscillators each work on their own.

What does it sound like? Well, that depends. Monophonic mode is probably the easiest way to get a sense of the overall sonic potential, with the layering of analogue and digital oscillators, the versatile multi-mode filter (two-pole low-pass, four-pole low-pass or one-pole high-pass modes), five envelopes and five LFOs providing huge range and truly powerful sound. However, that’s really only part of the story, because the two paraphonic modes inevitably sacrifice a little sonic versatility and heft in the name of extra voices.

Realistically, P1 is probably the sweet spot and a good compromise between the two, but that depends to a large extent what you intend to do with the synth and, indeed, how you intend to sequence it, whether internally or externally.

The Medusa is far from a one-knob-per-function synth, but it strikes a reasonable balance between front-panel controls and options hidden away in sub-menus. There is an inevitable degree of menu diving for certain functions across both the synth and sequencer, so visual feedback is essential. The left-hand OLED display is used to show feedback for the sequencer, while the right-hand takes care of synth info. The synth OLED defaults to what looks at first glance like some kind of spectrum analyser, but actually displays the current level of all of the envelopes and LFOs. It’s a useful way of condensing a large chunk of information into one immediately accessible format. 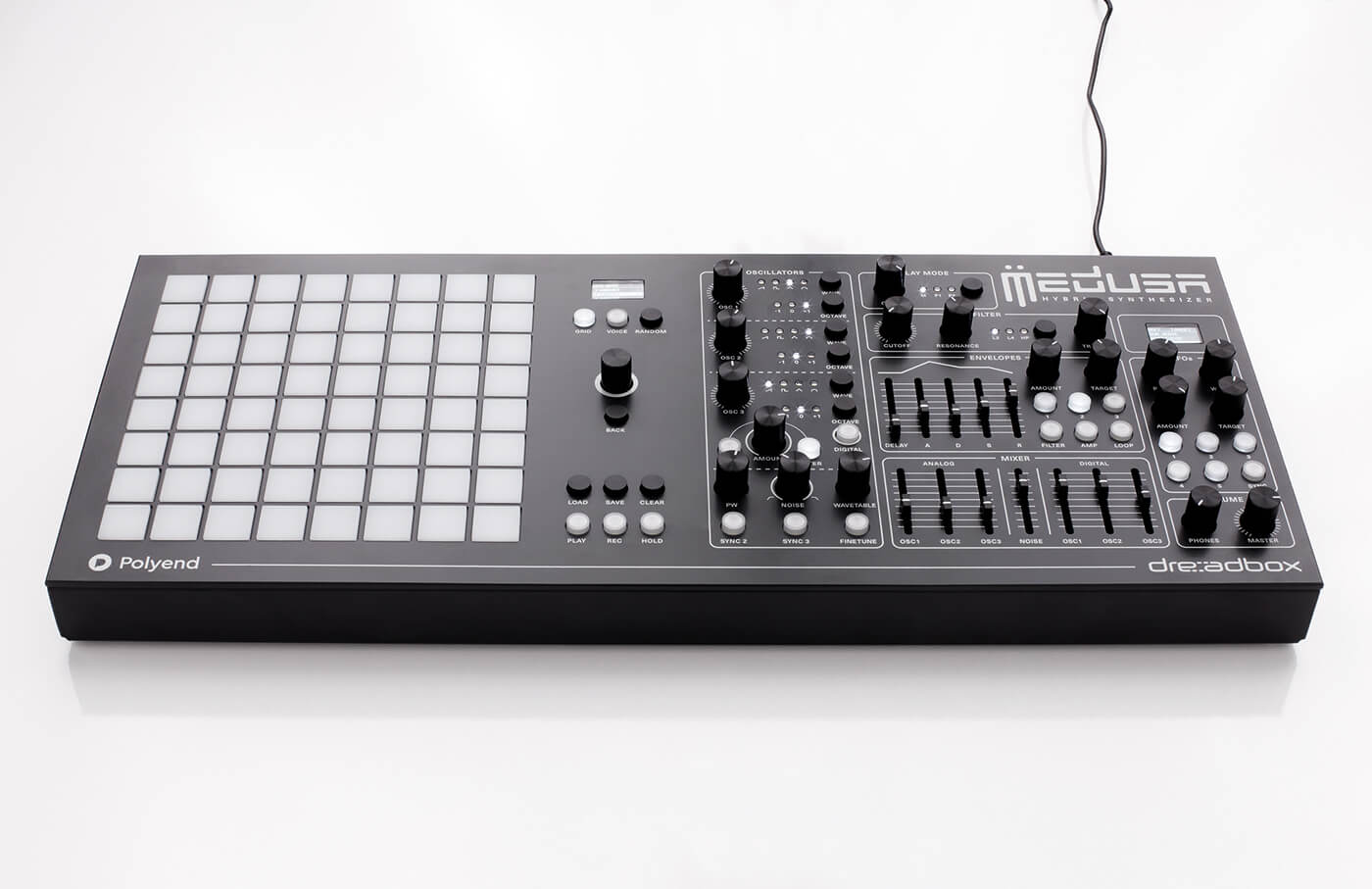 Shifting our focus across to the sequencer section, the limitation of the small OLEDs is soon apparent. The sequencer in the Medusa is based around the pads, but the options lurking behind that 8×8 grid are extensive, and unfortunately there isn’t a lot of visual feedback in some cases, meaning there’s a fairly steep learning curve. Even with a thorough read of the 27-page manual, it took me a while to get my head round some of the concepts and approaches employed.

Grid mode is the key focus, in which the pads represent your single-track sequence of up to 64 steps, playing back in various modes. Each step can contain note data (which may be polyphonic) and/or what Polyend refers to as patch modifying data (or PM data), broadly analogous to the parameter locks found in Elektron’s sequencers. It’s here that the complexity and lack of visual feedback becomes frustrating, because some of the approaches are far from intuitive. Deleting a note from the sequencer, for instance, involves pressing Record, holding the Hold button (not the Clear button, which is used to delete PM data), ensuring ‘selected steps’ is chosen from the menu in the seq OLED, holding down the pad for the step you want to delete, then releasing the Hold button before releasing the pad.

Processes like this probably won’t be a dealbreaker if you gel with the overall approach, but it feels unnecessarily fiddly when other sequencers might achieve the same thing by simply holding down a Clear button and tapping the pad. Spending time with the unit will surely help build up a muscle memory for the sequencer workflow, but one can’t help wondering whether the additional expense of RGB pads or larger screens might have allowed the whole thing to be a bit more intuitive and user friendly.

In the alternative Notes mode, the pads can be set to one of 38 scales and played in real time, either to enter note data into the sequencer or just to perform. Once you play a note, each pad also responds to movement in the X (horizontal), Y (vertical) and Z (pressure) planes. Each of these three axes can be assigned to any one of 35 modulation destinations, making your performance options impressive (you can also use it as a controller for other synths).

There are interesting parallels to be drawn with controllers like Roger Linn’s LinnStrument or ROLI’s Seaboard keyboards, which achieve expressive performance options in slightly different ways, but one notable weakness of the Medusa setup is that X, Y and Z expression is only active for the most recently played note (this is probably a limitation of the paraphonic synth architecture and its single filter; ironically, it doesn’t make a difference in monophonic mode, but does restrict your expression substantially in the paraphonic modes).

To the Medusa’s credit, it’s hard to separate the pads/sequencer from the synth and look at either one in isolation. If you just want a sequencer, you can buy the Polyend Seq; if you just want the synth part, there isn’t really an equivalent in the Dreadbox range, so you’d probably have to opt for the Abyss (four-voice analogue). The Medusa is substantially more than the sum of its parts, but only if you take the effort to extract its potential. 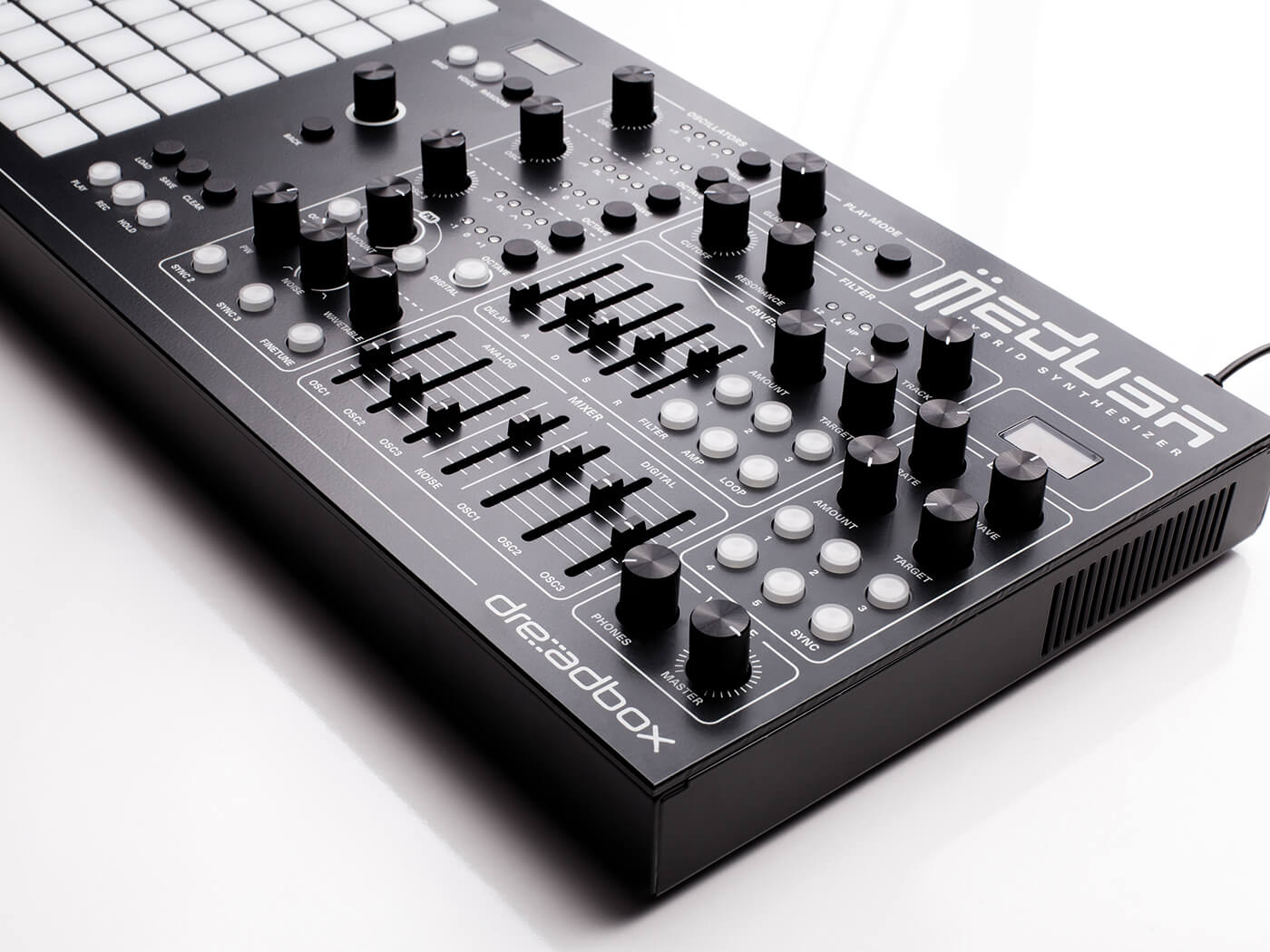 The Medusa reminds me in some ways of the first time I tried the Elektron Octatrack, back in 2011: there’s a real sense that this is a powerful, exciting piece of kit, but also that it won’t necessarily be to everyone’s taste. Fans of Dreadbox’s previous synths will find that the Medusa’s sequencing options are much less intuitive than its excellent synthesis engine. Users coming from the other direction may well find the setup quicker to get to grips with, but they should be aware that the Medusa sequencer isn’t just a single-track Seq.

However, there are certain approaches to music making where combining a purpose-built synth and sequencing approach certainly makes a lot of sense and we won’t be at all surprised to see the Medusa appearing more in studios and (especially) live setups.

Inside the Medusa box, you’ll find a small booklet of quotes, reporting glowing praise for Polyend products from luminaries of the electronic music world including Aphex Twin, The Chemical Brothers, Jamie Lidell and Sigur Rós among others. Once more producers and live performers get their hands on the Medusa, you can expect that list of praise to grow longer.

Why combine a synth with a sequencer? The two are directly linked, of course, but these days it’s more common to find them in separate boxes. The history of sequencers built into synths goes right back to the beginning of synth technology, when any modular synth needed a CV source to trigger notes and the solution was often a basic step sequencer rather than a keyboard. Over the years, that connection got broken to a large extent as MIDI keyboards became the go-to option for real-time performance and computers took over for sequencing.

However, a synth with a built-in sequencer does still make a lot of sense, not least because it takes away some of the hard work: spend a few hours trying to recreate the Medusa’s ultra-flexible parameter sequencing using separate devices and you’ll soon realise the benefits. 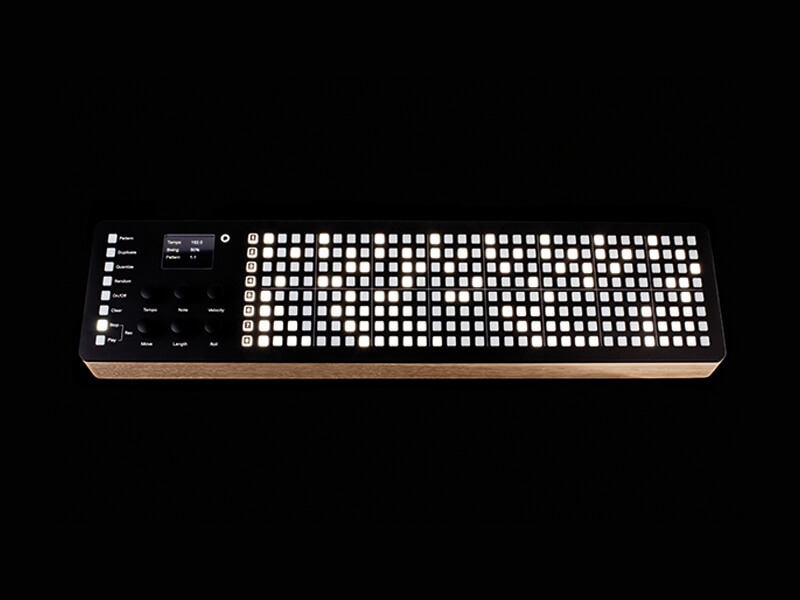 For an alternative 8-track, 32-step take on sequencing, Polyend’s Seq is the solution. The focus is on MIDI, but team it with the company’s Poly Eurorack module and you’ve got eight channels of gate, pitch, velocity and modulation CV signals to control modular synths. 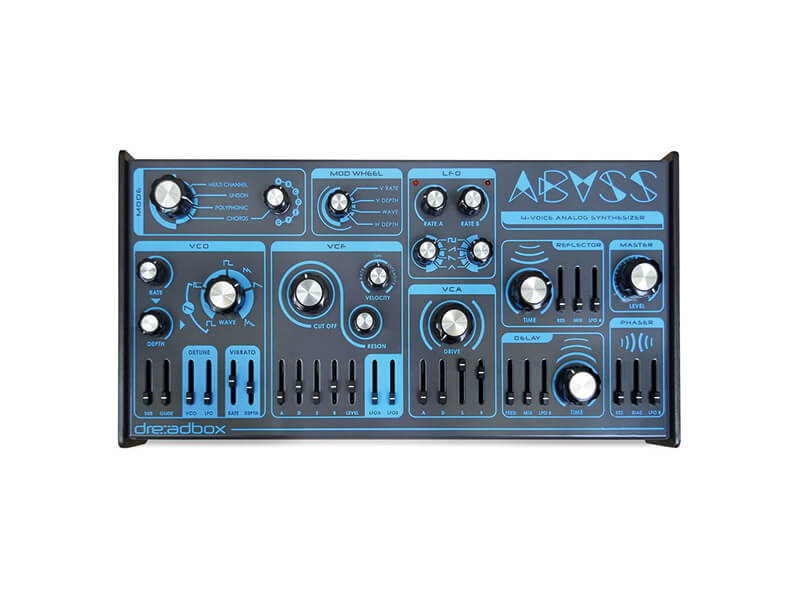 You can’t go far wrong with any of Dreadbox’s synth modules, but for its versatility we’ll plump for the four-voice analogue Abyss, whose simple VCO-plus-sub-oscillator setup allows it to create killer bass, chords, strings, leads, FX… Well, just about anything, really.