Review: Novation Circuit Tracks – A well-deserved upgrade from its predecessors

Can Novation’s follow-up to the hugely popular screen-free groovebox run rings around the original? 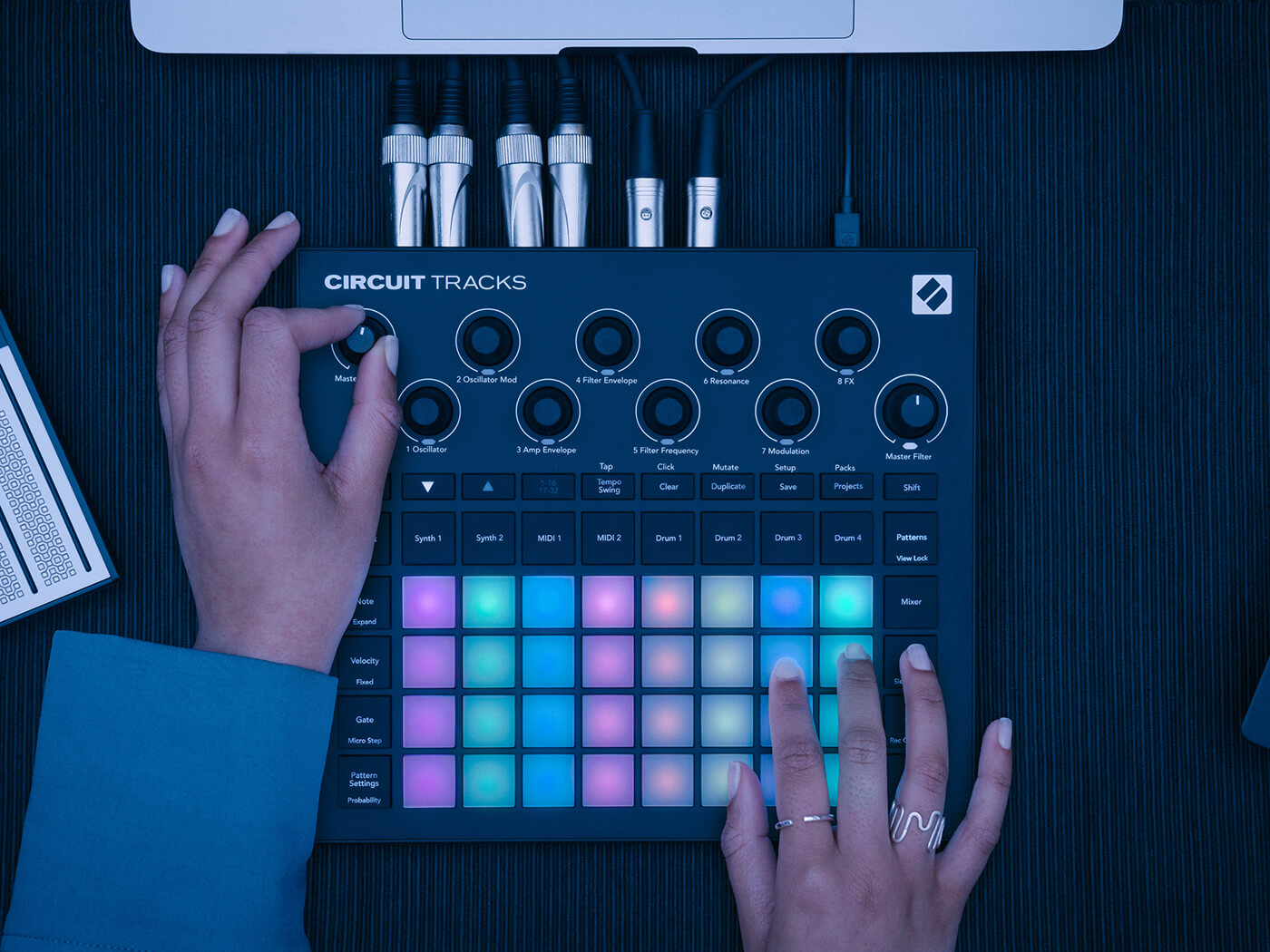 Grooveboxes have always divided opinion. The term was coined in 1996 with the release of the Roland MC-303, an all-in-one instrument that combined sequencing with a mixture of digital synth sounds, drum samples and effects. The MC-303 had a lot of hype on release, but this dissipated as analogue synths crept back into vogue. However, at its heart was an excellent idea: package everything you need to make electronic music into a single box. The groovebox concept stuck, and Novation is happy to tag its Circuit instruments as such. 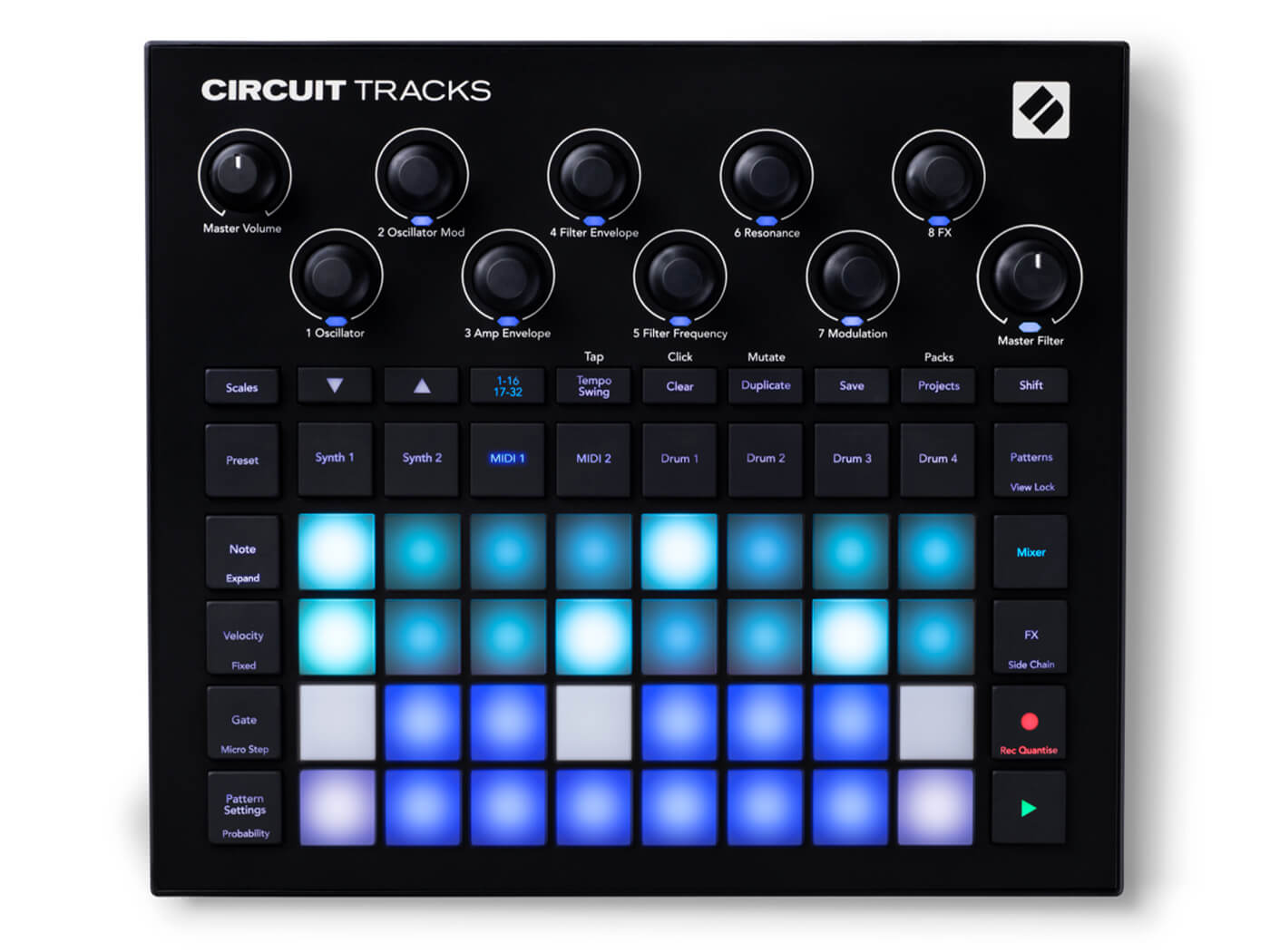 The original Circuit was released in 2015, based on Novation’s long-established virtual-analogue synthesis prowess teamed with a user-friendly step-sequencing workflow. It was joined in 2017 by the analogue-digital hybrid Circuit Mono Station, which combined a similar sequencing concept with an analogue synth engine derived from the Bass Station II keyboard.

The new Circuit Tracks expands on the original Circuit features in several ways. The emphasis this time is on connecting other instruments over MIDI. To accommodate this, the two dedicated sidechain tracks found in the original have become two dedicated MIDI tracks for controlling external hardware. This is a welcome shift and signals a new focus for the sequencer. You still get control over two internal polyphonic synth tracks and four sample-based drum tracks, and the sidechain control remains but is no longer quite so prominent.

There are a few reasons why people specifically turn to the Circuit. For some, it can be a tentative first dip-of-the-toe into making music; for others, it’s attractive because it offers a refreshing break from screens and computers. Elsewhere you see Circuits being used as part of bigger hardware setups, syncing with other machines. You even occasionally see multiple Circuits hooked up to create a self-contained ecosystem of groovebox goodness.

The big questions are whether the Circuit Tracks justifies a jump in price point over the original Circuit and, perhaps more importantly, whether it’s as enjoyable and efficient a tool for sketching musical ideas. 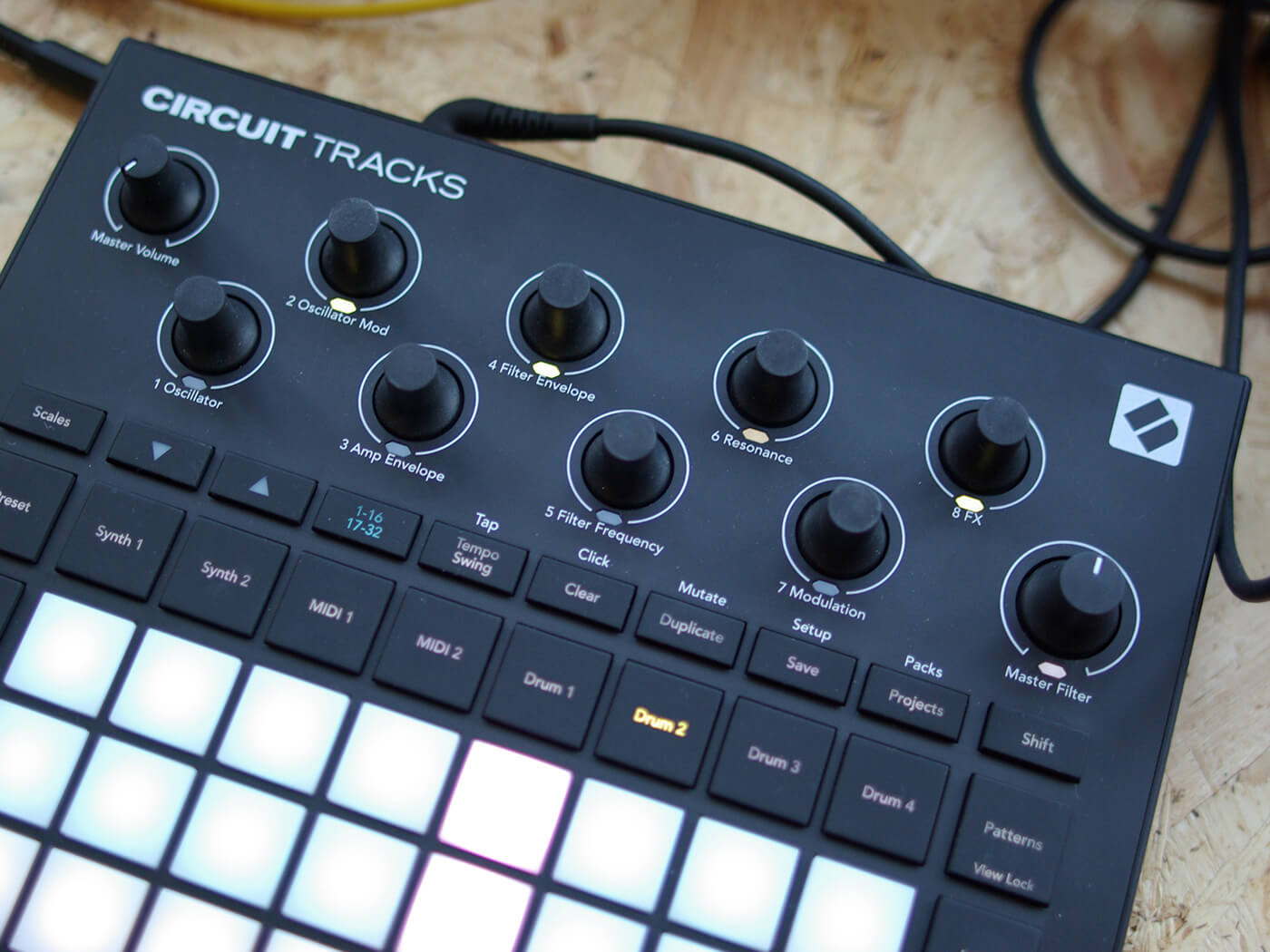 The Circuit Tracks’ design is a clear step up from the original, with a slimmer profile and more stylish look. The front panel is very similar in terms of hardware spec, with ten rotary pots positioned above an 8×4 bank of RGB pads, surrounded by transport and function controls. Still, Novation has pulled off that design alchemy of keeping things familiar while simultaneously freshening everything up, in line with the revamped Launch series. The smooth rubberised plastics and classy typefaces combine to make the result something akin to a baby Ableton Push, which is very much a good thing.

The original Circuit was fully portable thanks to a built-in speaker and the ability to run on six AA batteries. The Circuit Tracks loses both the speaker and the battery compartment. However, this isn’t quite the downgrade in portability that might suggest, since it now has a built-in rechargeable lithium-ion battery, giving up to four hours use. The lack of a speaker might be an inconvenience to some, but we’d hazard that most Circuit owners would either play through headphones or external speakers most of the time anyway.

Pleasingly, despite its slimmer design, the Circuit Tracks features full-size DIN sockets for the MIDI in, out and thru connection on the back panel, which is a clear upgrade on the 3.5mm sockets and breakout cables required to connect external MIDI gear to the original Circuit. Alongside them on the back panel, you’ll find the same quarter-inch stereo outputs as the original, joined by a new analogue sync output. USB connection for hooking up to a computer is now via the smaller USB-C connector, which doubles as a power supply. There’s also a microSD card slot to expand the storage and a new pair of mono audio inputs. 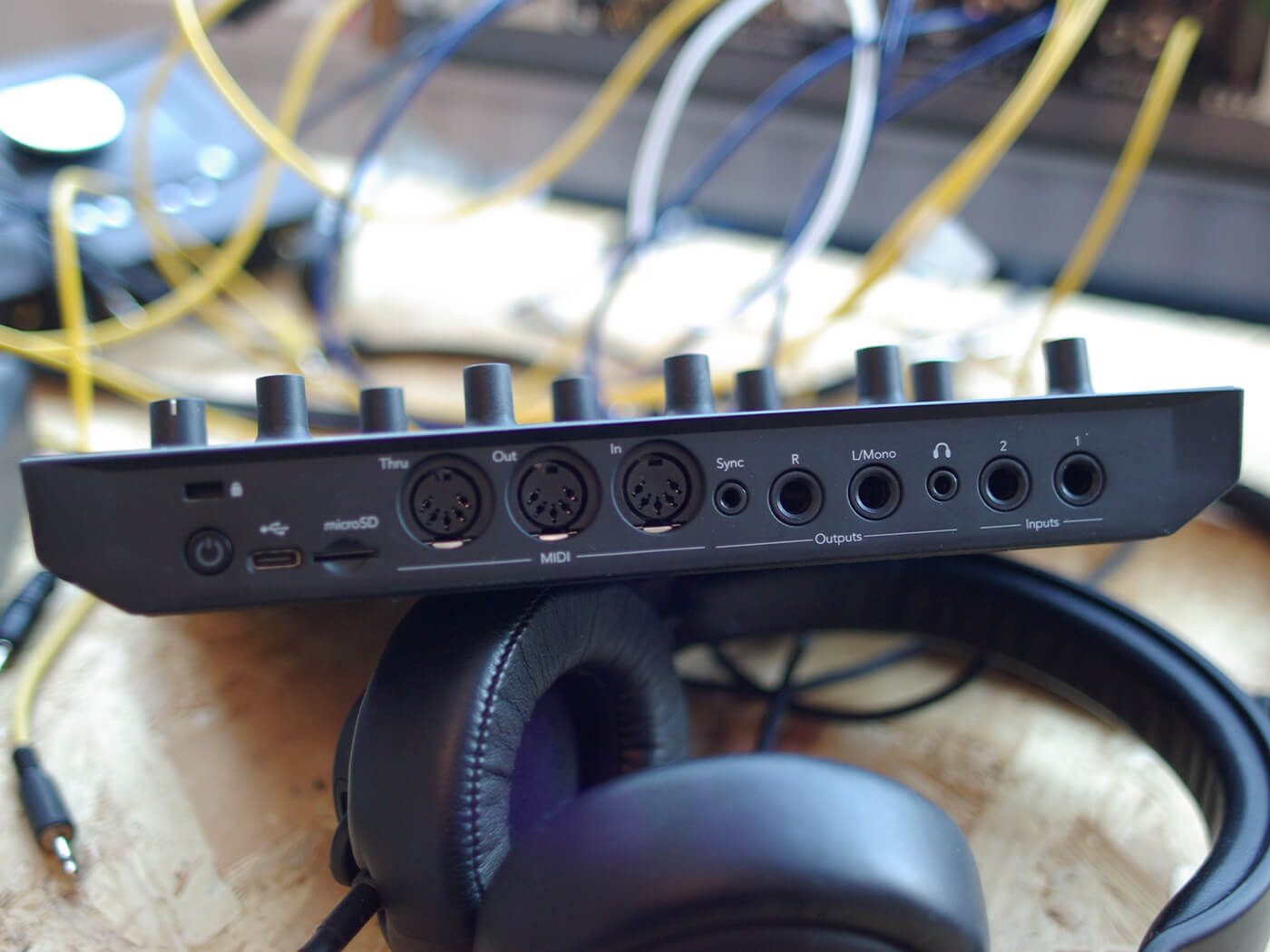 The original Circuit workflow was good from the start. Still, thanks to Novation’s obsessive firmware updates – there have been eight – each with incremental tweaks and improvements, the instrument has become impressively deep. Even so, the Circuit Tracks surpasses the original’s sequencing capabilities. The new groovebox offers 32-step loops and the option to record unquantised patterns in real-time, or with micro timing steps for strum-style effects or rapid retriggering. You can also apply probability to triggers and mutate steps to generate new patterns.

Off the beaten track

The two MIDI tracks are where external instruments can be sequenced and controlled, allowing you to send note and CC automation to other MIDI hardware. The inclusion of the two mono input sockets on the back of the unit is a key feature here, allowing you to route signals into the mixer and apply all the internal effects – delay, reverb, sidechain and master compressor. These inputs can be any line-level sound source you like, but the obvious approach is to use them for your external MIDI gear.  allowing you to sequence and mix everything within the Circuit Tracks.

It was possible to sequence external MIDI hardware with the original Circuit by muting channels in the mixer, but you could only send note data. The new approach is significantly more powerful, doesn’t sacrifice any synth/drum parts in the process and has the bonus of not requiring a mixer to sum the signals from the Circuit and external hardware. If you’ve got instruments like Korg Volcas or other Novation synths, it’s a huge bonus.

Is making music with Circuit Tracks still intuitive despite the added complexity? Yes. You can get started immediately even without any prior knowledge of music-making, playing patterns from the preset memory, noodling with the eight main control knobs for synth parameters and then building patterns. In fact, in a departure from the original where the knobs lacked any labelling, Circuit Tracks now has permanent labels for all ten of its rotaries, which is another welcome addition.

But there is a caveat here: one of the most striking features of the Circuit Tracks is the omission of a screen of any kind. Novation bill it as a ‘hands-on groovebox’ and that’s an essential point – you’re meant to enjoy the feel and hands-on experience of the instrument rather than staring at a screen. However, that also means you need to explore the Circuit Tracks ecosystem to get the most out of it. It isn’t just a case of learning what different views and pages mean, but also exploring the Components platform where you store Sessions, load samples and edit the synth engine.

It’s here that you’re required to put in a bit more effort than you might be with a rival like the Roland MC-101 or Korg Electribe, both of which spell out their workflows a little more explicitly. Is one approach better than the others? Not necessarily. As a strictly hands-on experience, the Circuit Tracks is superb once you’ve got your session prepped. It’s got a quick, efficient approach that makes it easy and fun to create loops and arrangements without any real menu-diving. The more complex parts of session and sound editing are handled via the online Components platform.

The downside of that approach is that certain features require more manual-reading, and there are some quirks in the user interface along the way. For instance, adjusting the tempo produces a BPM readout via blocky digits spelled out on the RGB pads. Meanwhile, you may push a button like Mixer and yearn for the simple faders of the MC-101 rather than the slightly mysterious colour code you’re presented with here. In short, the Circuit Tracks sticks with the somewhat polarising approach of the original Circuit. If you get it, great; if you don’t, you’re unlikely to be won over by the new model.

Novation helped revitalise the groovebox market with the original Circuit, and the Circuit Tracks feels every bit the mk2 model, with logical upgrades in a lot of areas, from the hardware spec itself to the refreshed feature set. Whether it’s enough to tempt owners of the old model to upgrade depends largely on their interest in sequencing external MIDI hardware. For newcomers to the Circuit world, the Circuit Tracks represents an even more capable and efficient groovebox than the original. Put simply, it’s one of the quickest and easiest ways to get started making electronic music.