The latest version of the company’s portable virtual analogue synth, the SKULPTsynth SE, packs an awful lot into a very small frame. 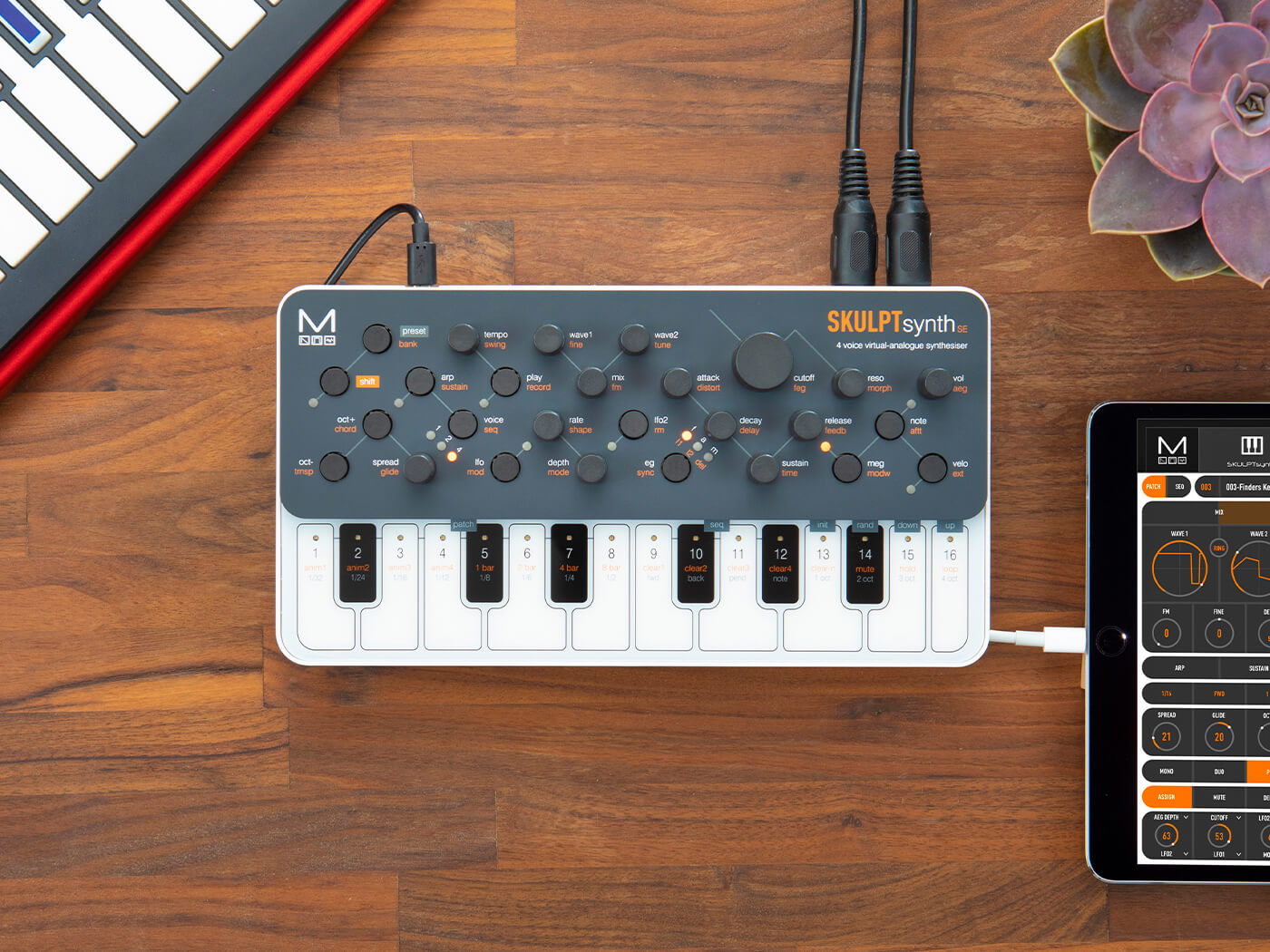 The SKULPTsynth SE is an incredibly powerful synth for its size and offers a huge amount of flexibility. The combination of the hardware synth and the control app make creating sounds very easy.

Modal was launched in 2013 with the intention of making synths that pushed boundaries and brought something new to the table. Their latest product is the SKULPTsynth SE and it fulfils the company’s promise by fitting a lot of features into its small frame.

The synth is pretty small – about the size of a 2-in/2-out audio interface – but it’s very attractive and comes with a hard plastic cover to keep the synth safe if you’re using it on the move. The cover also conveniently slots on the back so the device can be used on a lap, which is a nice touch.

The packaging also includes instructions on installing batteries (six AA type) correctly and a short Micro-USB to USB cable for powering and controlling the synth from another device. The battery compartment doubles as a base on the synth to allow the synth to sit at an angle when working at a desk. In both aesthetic and ergonomics, SKULPTsynth SE has been beautifully conceived.

Even though this is a small device, there are an impressive number of controls on the front panel, and each control has at least two different functions accessed via shift key or the keyboard. Modal has done well to expose the most critical synth functions on the main layer. You can change waveforms and adjust the filter and envelopes without diving deeper through layers. 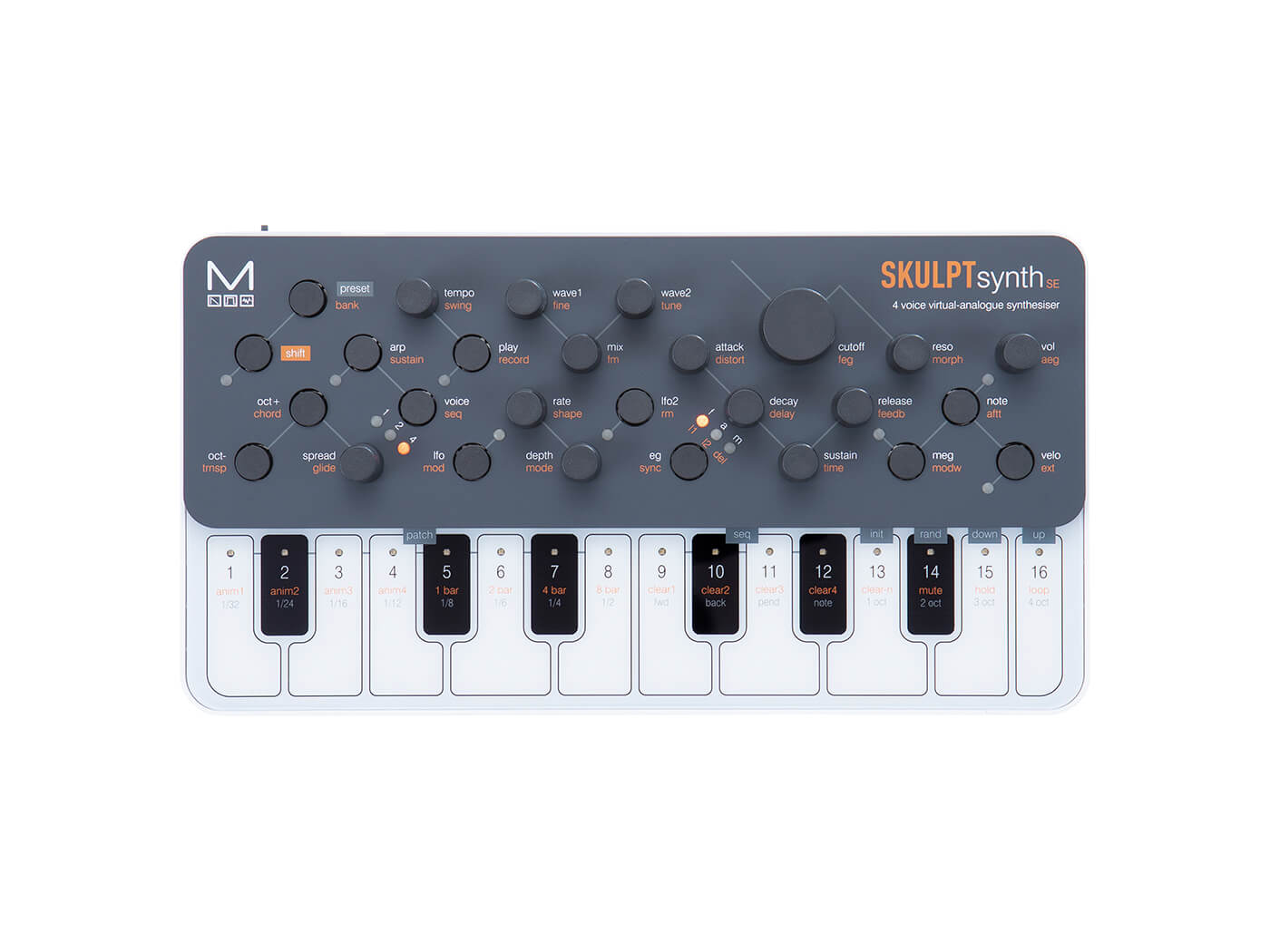 Each Wave is made up of several oscillators to create a really big sound. For example, if you run in monophonic mode, all 32 oscillators are assigned to one note. For duo mode, 16 voices, and polyphonic mode, eight voices. When you adjust the Spread control, the SKULPTsynth SE detunes these oscillators away from the root pitch to create a much thicker tone.

Wave 1 moves seamlessly from sine wave through to square and then onto PWM. Wave 2 is similar but replaces PWM with noise. There is a simple mix control that makes it incredibly easy to dial in beautiful combinations of the oscillators. The point between triangle and sawtooth on the SKULPTsynth SE is a particular highlight and the noise is remarkably usable when mixed appropriately.

As is customary, the largest knob on the synth belongs to the filter cutoff frequency and, in all likelihood, this is the control you will spend most time adjusting. The SKULPTsynth SE features a two-pole filter, but rather than being low-pass or high-pass, it has a variable adjustment control called Morph. The Morph control slowly shifts the filter from low-pass, through band-pass all the way to high-pass to create the shape of filter that most suits your sound.

Unfortunately, we found the filter a little disappointing – it just isn’t that powerful. No matter how we set it up, we struggled to get it to remove as many frequencies as we wanted. We appreciate that as a two-pole filter it’ll only be removing 12dB/oct, but an option to make it a little more extreme would have been more to our tastes. The resonance peak adds a pleasant emphasis, when you find the right frequency for the cutoff, but overall it lacks the cut that we like to hear in a filter section.

The SKULPTsynth se includes three separate envelope generators and they are selected by a small button with three LEDs marked F, A and M (filter, amp and modulation). Operation is quite simple, even if the initials were a little confusing at first. The envelopes are controlled by four knobs to adjust the usual ADSR values and it permits extremely detailed editing. Though the envelope doesn’t quite go to infinite release in the way that some synths do, it is still pretty long.

The modulation section contains two LFOs but you can route them to almost every control on the synth. Modulation routing is possible, if complicated, from the hardware but is much easier via the software. With the software you can easily route the LFOs to pitch, filter cutoff and various other controls. The only drawback is that the depth control feels a little sudden – it seems to go from very little movement to enormous sweeps with minor adjustment making precise control a little tricky. 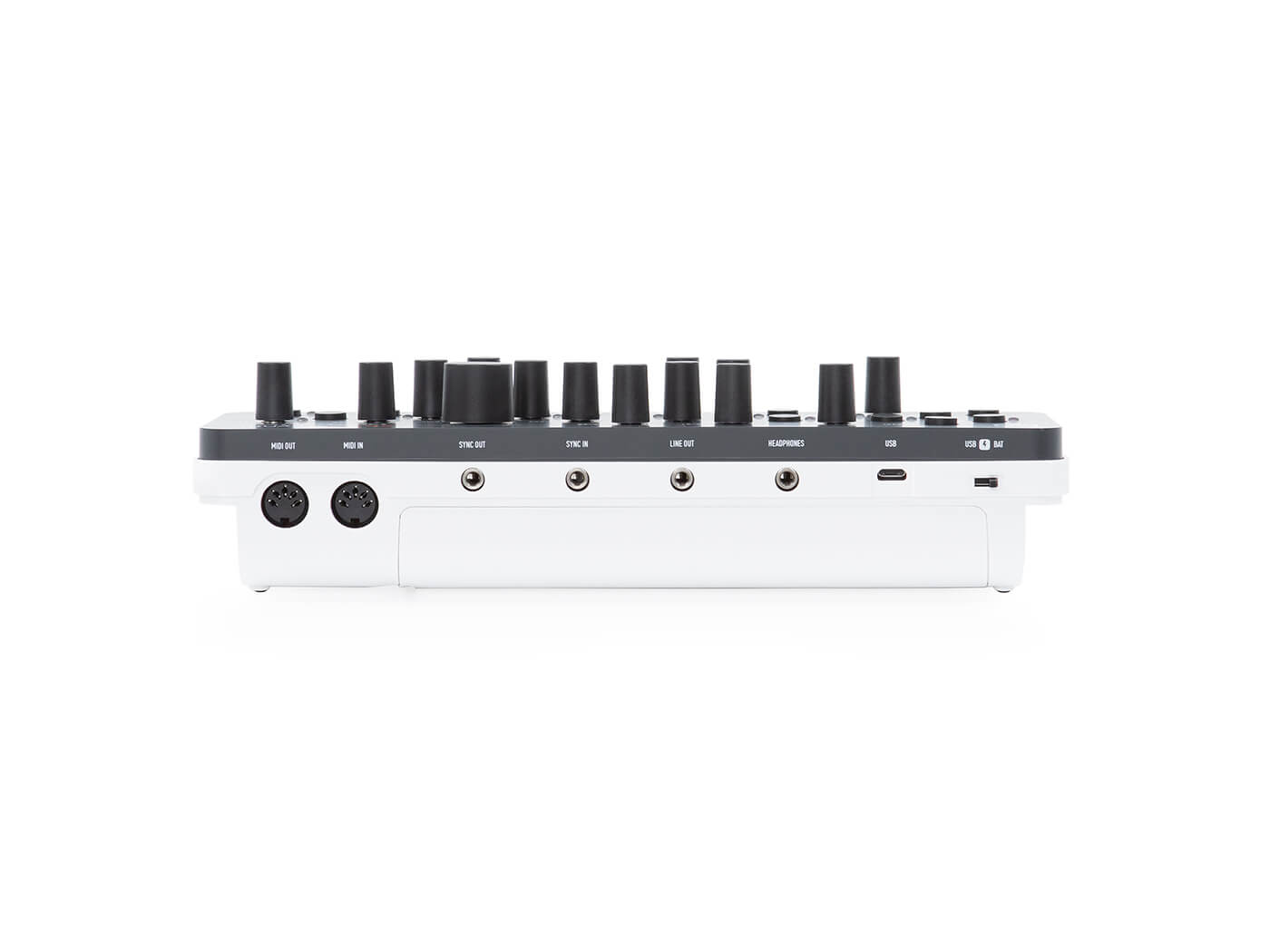 In addition to all the usual synth controls the SKUPLTsynth SE has a couple of effects, an arpeggiator and 64-step sequencer. The delay effect is quite musical and the repeats add extra texture but the distortion can get very fizzy when turned up beyond subtle. The arpeggiator, however, is superb with many options, and the sequencer is a real bonus.

Like a small but growing number of synths, the SKULPTsynth SE responds to MPE (MIDI Polyphonic Expression) data. So, if you have a controller that can output MPE, then the SKULPTsynth SE can follow it. Hooking up a ROLI Seaboard works flawlessly. With just a few minutes of setup, you can move pitch bend data around during performance and it sounds great. This is an excellent feature for getting some extremely musical performances from the synth.

As mentioned above, there are a lot of controls on this synth, so some of them are accessible on secondary layers and via combinations of button presses. However, Modal has a standalone app and plug-in that links seamlessly with all of their synthesizers. The application itself doesn’t create any sound but controls and responds to the connected hardware.

When it comes to programming the SKULPTsynth SE, the app is invaluable. Although it is perfectly possible to achieve everything via the hardware, we use the app constantly. It shows waveshapes in real time as you sweep through the oscillators and it makes finding the sonic sweet spot that little bit easier.

The biggest advantage of the app is how it opens up routing controls and other settings. It was so much easier to click a few buttons to route the LFO to the cutoff frequency than it was with assorted button combinations on the hardware. The synth and the app GUI combined are the perfect blend of hardware and software. We found ourselves interacting with the controls on the synth for sound design but using the screen for fine-tuning and routing. 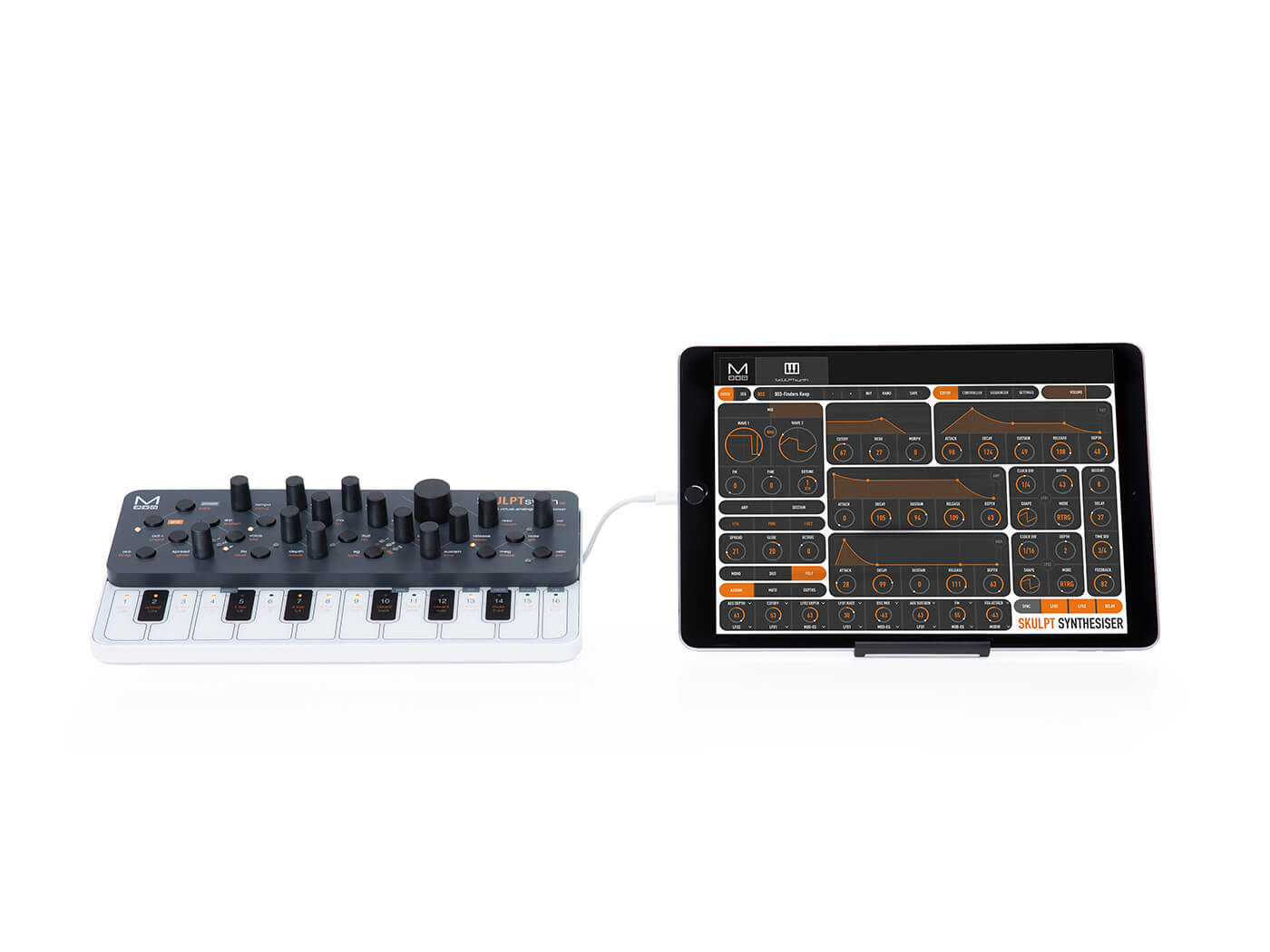 The SKULPTsynth SE is designed to be a creative tool in a portable package. The amount of functionality that Modal has crammed into such a small space is astounding. With batteries you could easily use this thing anywhere you wanted for creating music and have access to an extremely powerful synth. The only let down is the filter – it lacks depth and doesn’t offer the level of tone shaping that we expect from a filter on a synth of this quality.

Where this synth comes into its own is in combination with the app. The ability to see all of the controls on screen and have quick access to the routing is a marvel for creativity. This is undoubtedly a fantastically powerful synth for the size and money.