MOD Devices Dwarf review: Giant effects chains at the tap of your foot

If you enjoy switching between creative signal chains, the MOD Devices Dwarf could be the stompbox for you. 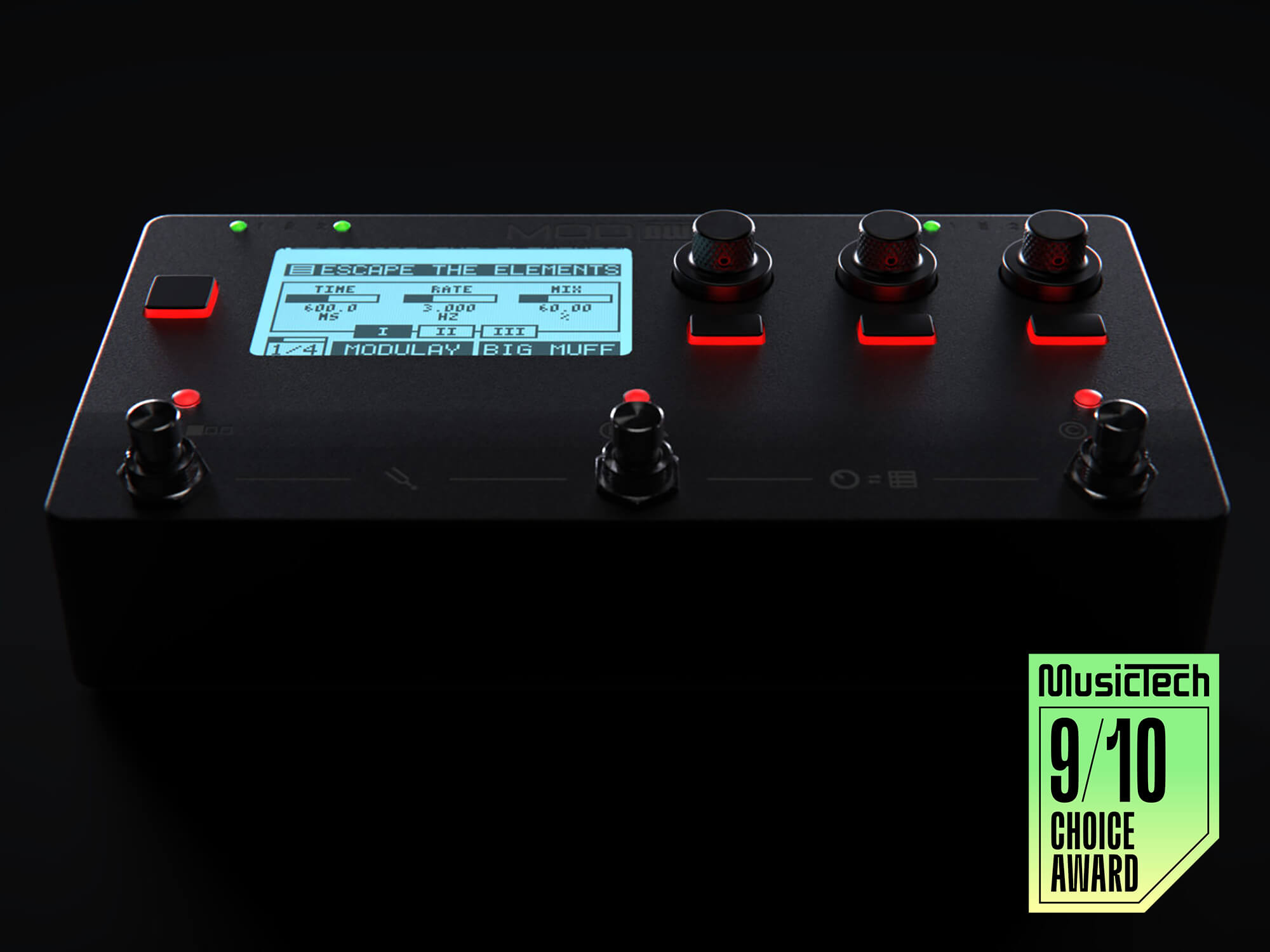 
zMusic technology nerds love to plan, design and build rigs. Whether it’s studio rigs, pedal boards or any other design that requires combining music production equipment in some way. Brands have tapped into this before, with Native Instruments’ Reaktor, Max MSP, Reason Studios’ Reason and web-based software such as AudioTool. The idea of being able to patch together virtual hardware in software appeals to the nerd in us all.

However, all those platforms require the use of a computer. Therefore, if an artist wants to use these creations outside the confines of the studio, it demands taking a computer on the road with them. But recently, hybrid designs have appeared on the market where users can design custom rigs on a computer, and then store and run the patches on external hardware. MOD Devices is leading the charge on this wave, having released its table-top Mod Duo X in 2021 and this year releasing the floor-based stompbox, MOD Dwarf. 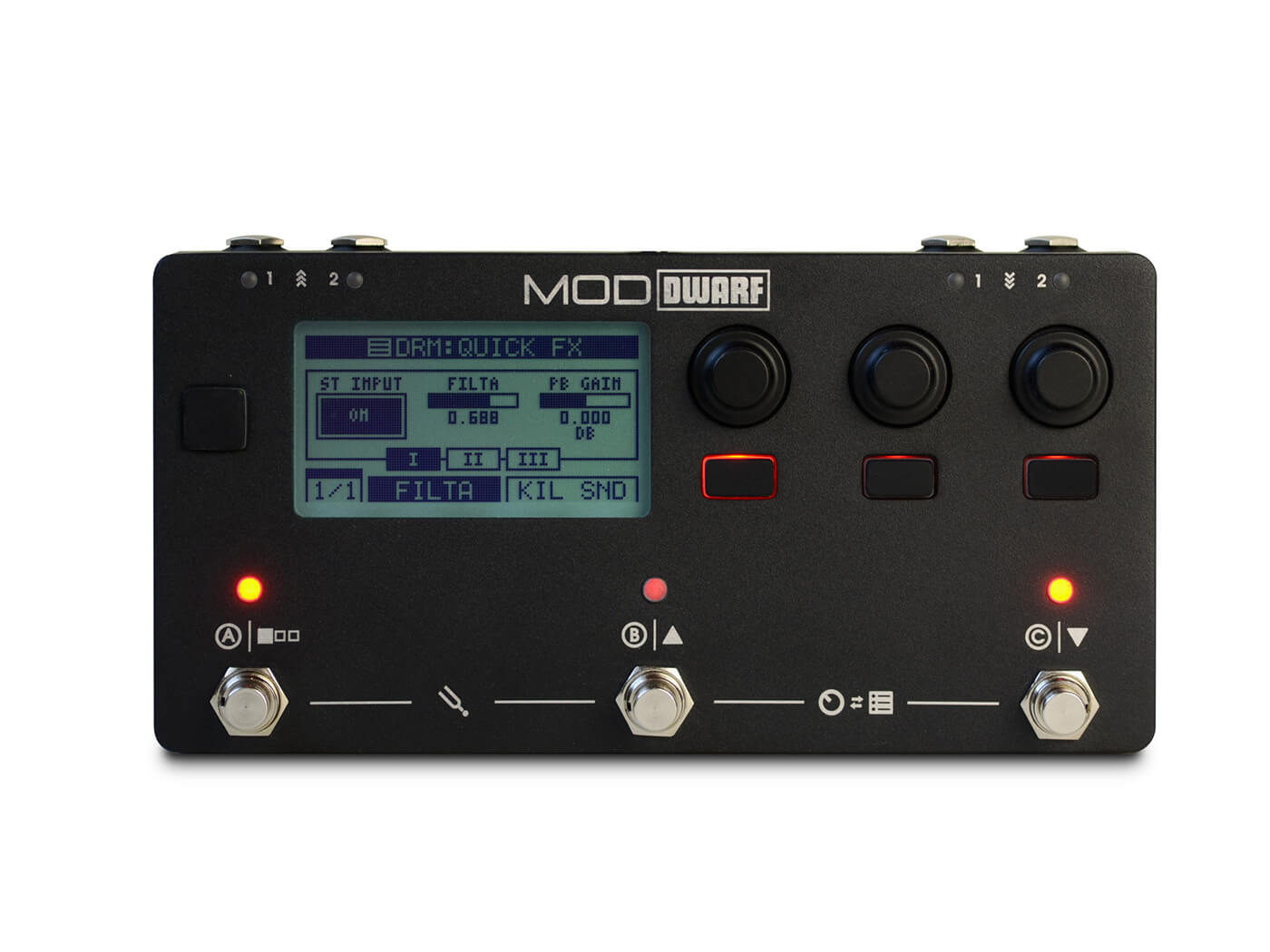 The pedal arrives in a beautiful custom-moulded semi-hard case and, as well as providing protection for any future gigs that the Dwarf goes on, it’s aesthetically pleasing, too.

The Dwarf connects to any computer with any internet browser and opens a GUI that looks like a table with equipment laid out on it. Basic controls are located in the top right of the screen and libraries of sounds are found bottom-left. The interface crashed on us at one point but a quick off-and-on again fixed this and the pedal in standalone mode was rock-solid.

With our new empty virtual pedalboard loaded, we explored some sounds. The effects are divided into different processor types so it’s easy to filter the (potentially) hundreds of plug-ins to find the sounds that you want. The different plug-ins are dragged onto the virtual table and then connected with virtual cables. Fortunately, mono effects can easily be split into stereo inputs and there are assorted utilities if other connections are required. 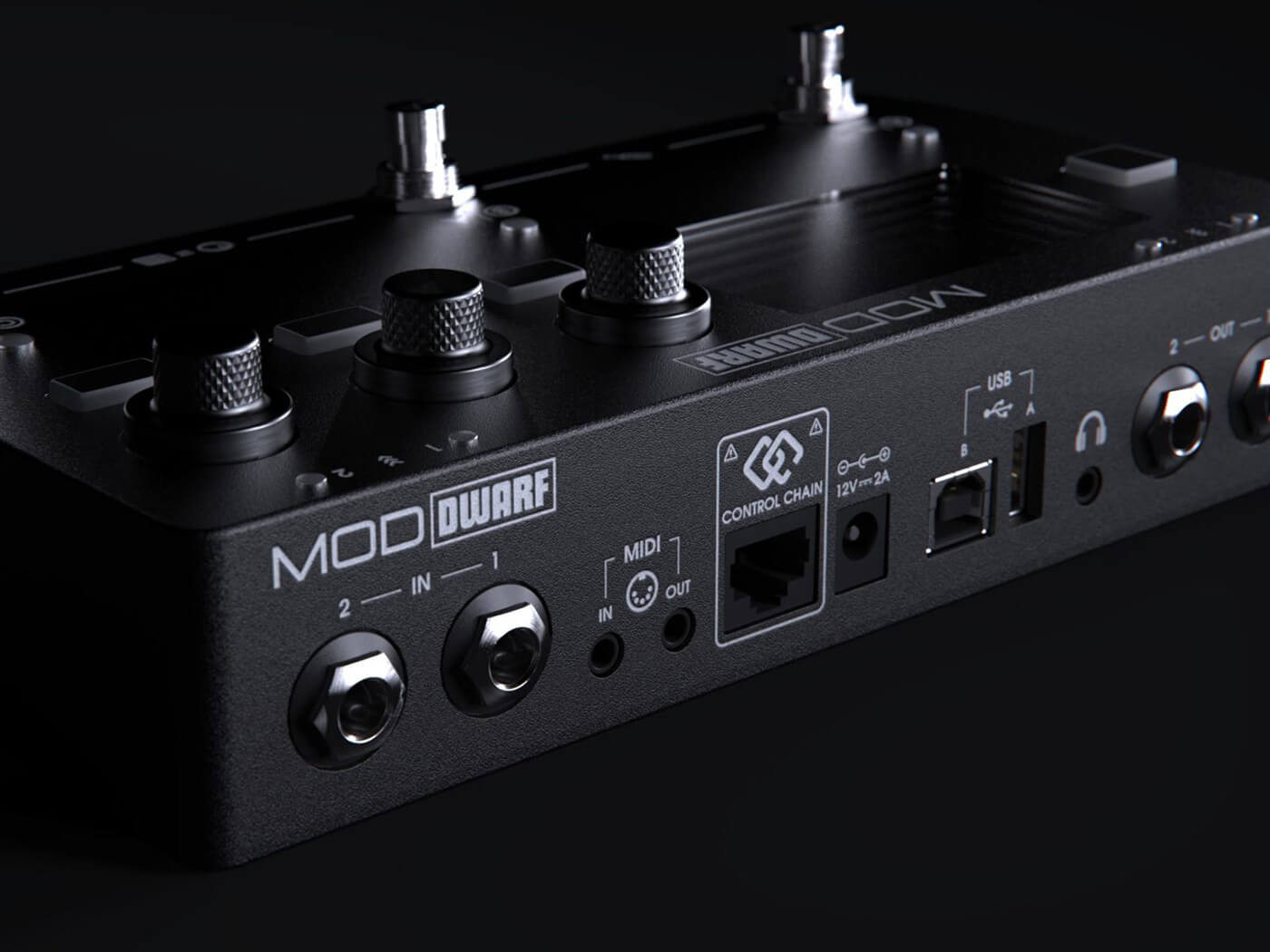 With a basic setup loaded of an overdrive into a distortion, into a delay and then a reverb, we ran an electric guitar through the Dwarf.

It took a while to set the input gain from the guitar to a suitable level but, once dialled in, the sound was pleasingly realistic. The setup we created had two different drive circuits and they responded dynamically to the instrument.

One circuit labelled Tube Drive is presumably an emulation of the BK Butler Tube Driver (not the ubiquitous Ibanez Tube Screamer – although there’s one of those, too). It responded well to different incoming transients and the tone controls on the pedal emulation are effective at emphasising either treble or bass for brighter or darker overdrive.

The other dirt box we tried was the Big Muff, which emulates the iconic Electro-Harmonix Big Muff. This didn’t sound quite as big and chewy as the real thing and didn’t have the thickness in the low mids that one might expect. But it was still a good fuzz/distortion sound for higher-gain sounds. 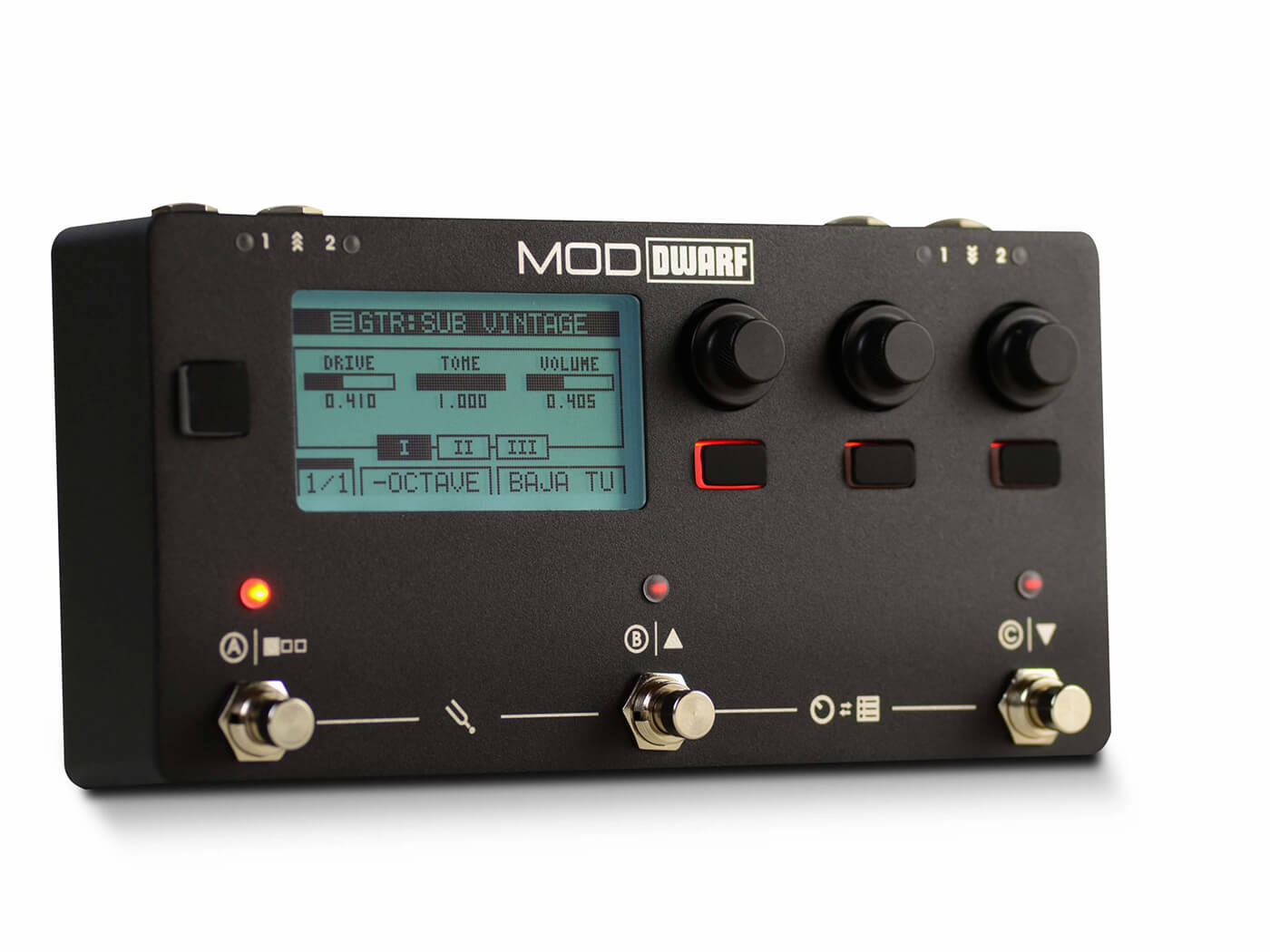 The MOD Dwarf isn’t designed to only be used by guitarists and has many presets for keyboards included within its library. Once hooked up to an interface, we routed an electric piano to the Dwarf and explored some of the pre-programmed pedalboards and snapshots.

You can load different pedalboards from the pedal by switching into Control Mode. This allows you to scroll through different banks of boards using the footswitches. It didn’t take long for us to find a stellar preset with a beautiful stereo delay, modulation and reverb that was immediately suitable for an electric piano.

The wet effects all sounded as you would expect and there were a number of emulations of most types of delay – but a large number of them focused on more experimental uses of the effect. There are a lot of plug-ins that are labelled delay and reverb but seem to have granulation or shimmer applied to them. But sometimes, what a patch really needs is a simple BBD-style delay or a basic digital reverb. The Dwarf does have these but they are nestled amongst a lot of other more esoteric 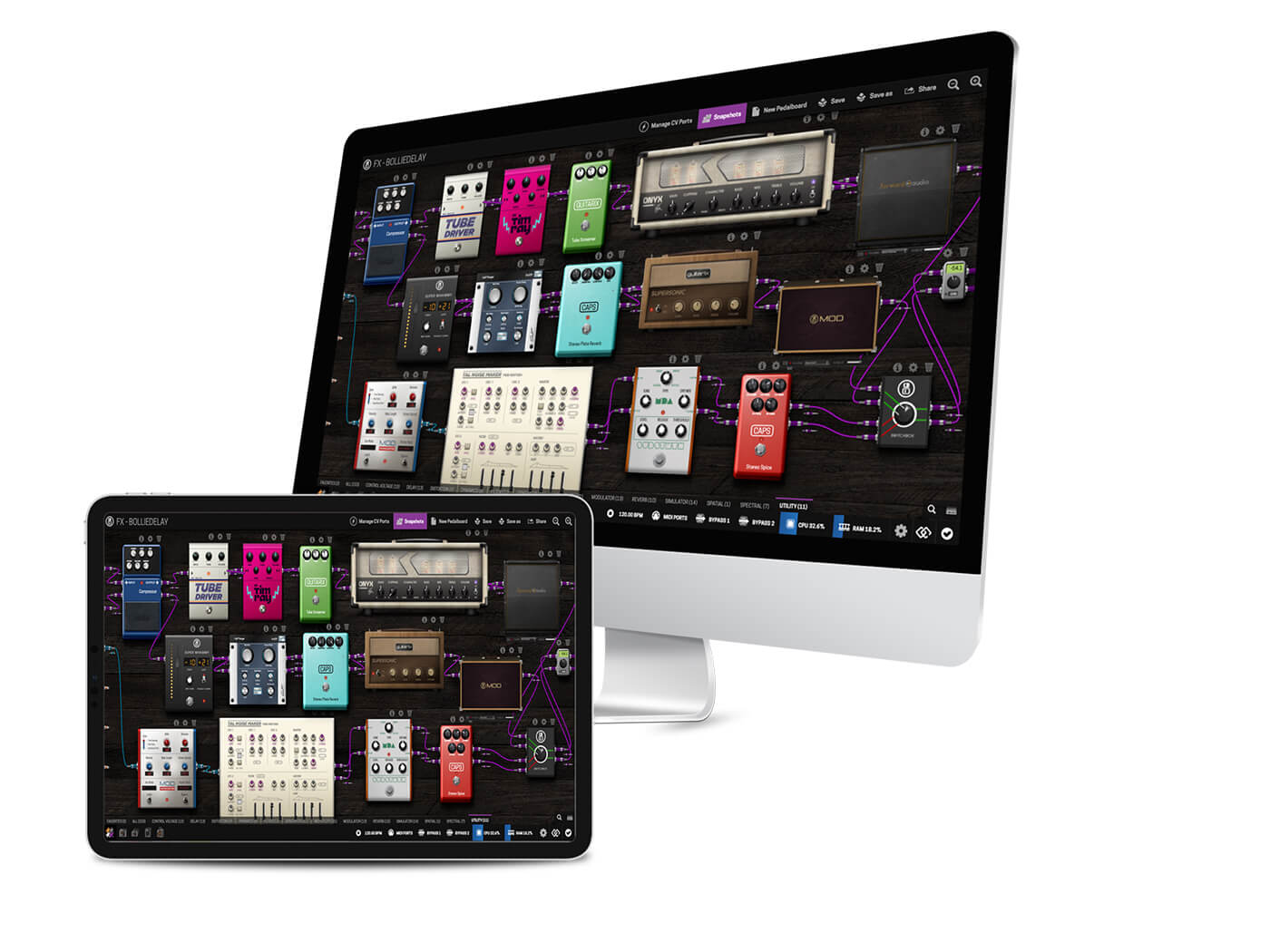 It swiftly became apparent that, when combining Dwarf with a computer GUI, the presets included with Dwarf were significantly more complex than the boards that we had been building up until this point.

Many of the presets included complex routing options with parallel mixes for dry blends, multiple delay lines and processing wet signals with other effects at the press of a button (such as applying pitch modulation to only the delayed signal).

The MOD Dwarf may be the perfect tool for some musicians that have specific effects paths and signal chains that they use live or in the studio. Because the plug-ins all run on the hardware unit it means that there are no worries about compatibility in remote locations.

This pedal is supremely powerful and could replace entire sets of signal chains in a large number of settings. Even for non-guitarists, the idea of creating a signal chain of effects and taking it to another studio in a backpack is surely tantalising.