Korg caught the crest of a huge wave when it announced the revival of a classic synth at NAMM. But can it ride it to success? We assess the state of play. 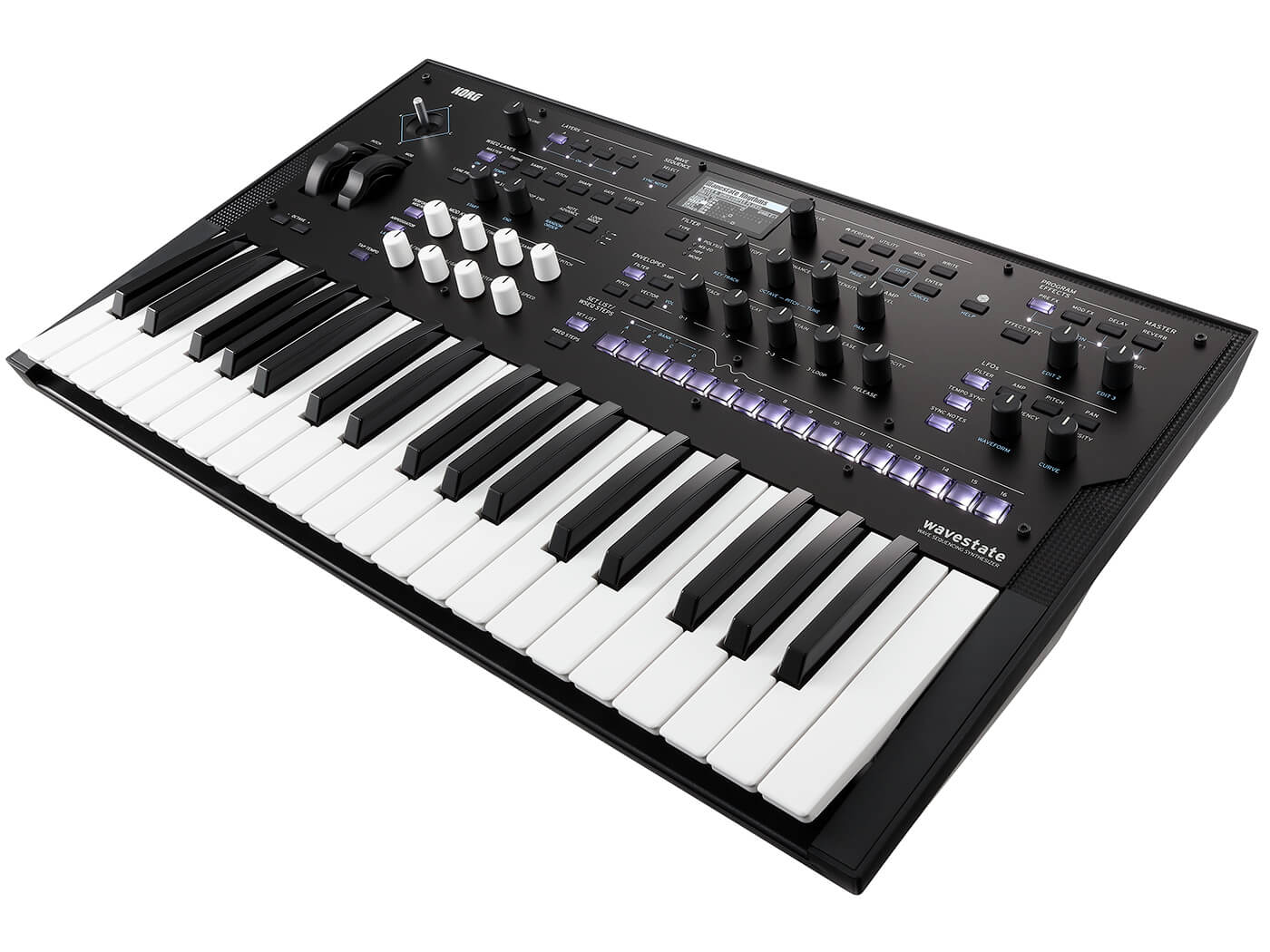 Back in the early-1990s, analogue was dead, sampling was big and everyone was searching for the next big thing in synthesisers and audio programming. Sensing a shift in the waters, Korg caught a huge wave and rode it all the way to the bank with the introduction of its Wavestation series. Shipping in full-sized keyboard formats, alongside the now legendary A/D and SR rack-mounted alternatives, the Wavestation synths gave rise to the wave sequence, a form of live-loop that could be triggered via MIDI to provide a hypnotic, if not mechanical sounds.

The Wavestation wasn’t without its issues, however – often, its sequences wouldn’t trigger properly, which meant having to sample them to ensure that they played nicely timing-wise. Despite the model’s minor inconveniences, news that the Japanese manufacturer is reviving the wave sequence was met with tremendous surprise and anticipation upon its announcement at NAMM in January. Can the Wavestate possibly live up to its predecessor? 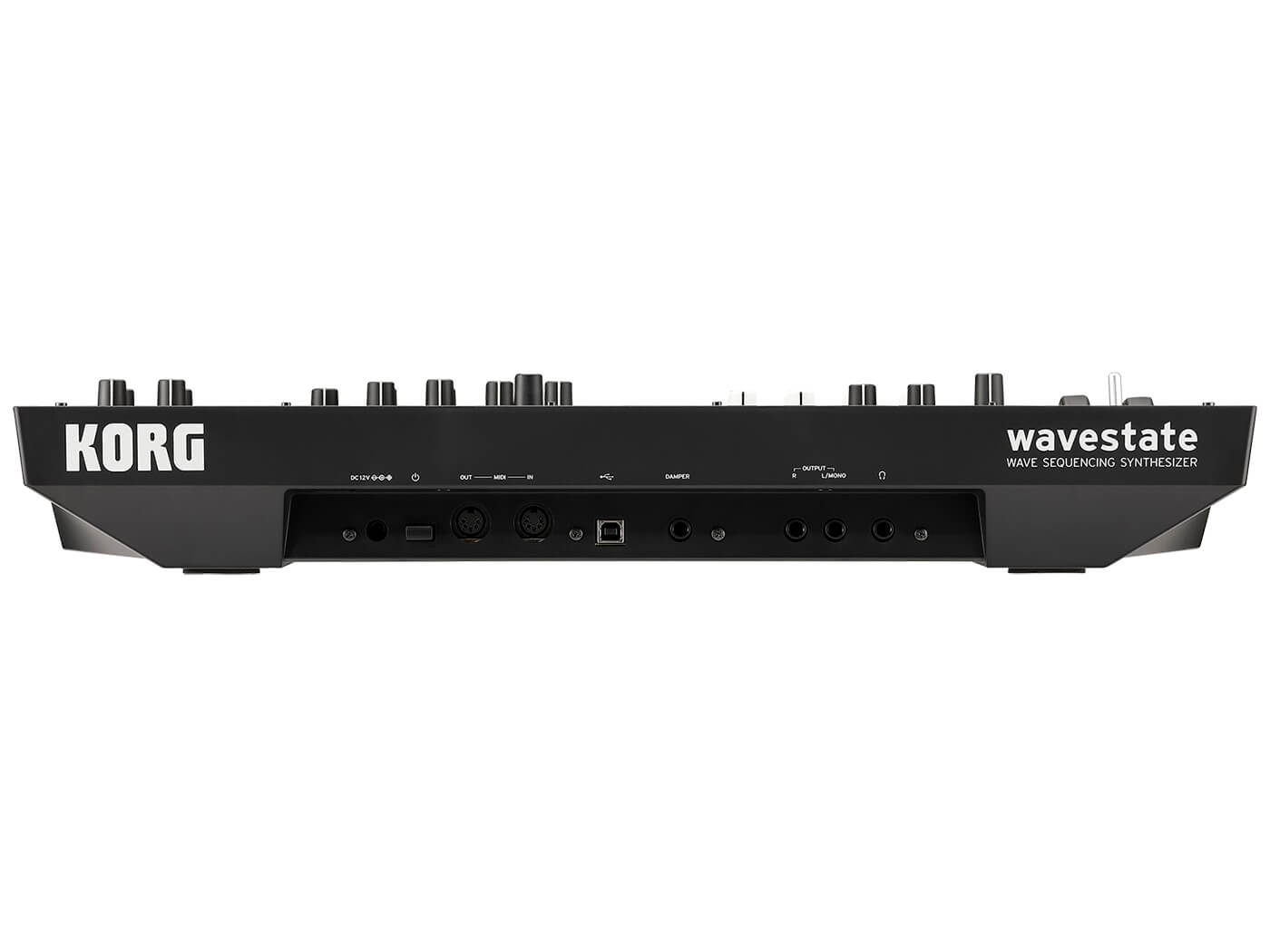 The original Wavestation was the epitome of early-1990s synth technology. Its dainty display made manual programming about as easy as painting your interior hallway by pushing a paintbrush through your letterbox. Many instead programmed the synth via presets or a computer-based package. Thankfully, in 2020, Korg has mostly learnt from its mistakes. Though there is still some menu navigation involved, Wavestate largely simplifies the process.

The keys on the Wavestate are full-sized, as opposed to the slimmer variety found on the Minilogue, and the keybed offers velocity, but not aftertouch. It does, however, offer velocity release. Being a digital design, it’s not terribly heavy but it feels solidly built, with a degree of lateral movement in the pots if you apply pressure. The keyboard, on the other hand, feels a little unforgiving. It’s nice to have a full-sized keybed but this one isn’t particularly reassuring to play. Regrettably, it’s a little underwhelming. The pitch and modulation wheels are located above the keybed, in the upper left. The synth casing and fascia are made from black plastic, and the front panel is intelligible, with its white legends and smattering of illuminated buttons.

Life in the fast lane

The Wavestate’s architecture is based upon layers, of which four, named A, B, C or D, make up each preset. These layers can be controlled via the Vector control joystick above the wheels, which essentially allows you to mix between a four-point timbre in real time.

The Wavestate ships with a large number of multi-sampled sounds, including synths and pianos – long-time Korg users will get a kick out of the classic M1 piano synth. There are also fascinating textures alongside the better-known instruments. Even if all you want from the Wavestate is a synth that allows for the layering of four samples, there’s so much scope here for creating basic or magnificently modulated tones that you won’t be let down.

But, as impressive as the above features are, they aren’t quite the Wavestate’s calling card. That honour goes to its wave sequences.

In essence, a wave sequence is a series of sequential steps, each with an attached sample and its own properties. The premise is not dissimilar from the sort of step programming used in drum machines. The difference here, however, is that you’re able to assign the length of each step and alter its pitch, volume and more, allowing you to craft everything from basic rhythms and single-note sequences to ratchet-style effects and 64-step phrases.

Korg has packed in an immense number of presets, described in Korg’s language as “programs” and “performances”. The programs at the fundamental level are deployed within performances to create larger textures. At the point of shipping, the Wavestate offers 740 programs and 240 performances, although users may also save tens-of-thousands of their own.

The leap to wave sequencing 2.0 has granted the Wavestate a large smattering of gratifying performances, including drums, pads, basses and more, all of which offer the ability to switch timbres off by double-pressing the corresponding layer.

There are seven lanes attributed to each layer level, with each handling a specific function. With the sample lanes, for example, you could assign samples to specific steps, which would be triggered in turn. Of course, you don’t have to map a different sample to every step – you might choose to trigger the same sample on multiple steps. To do so, you could use the pitch lane to alter the specific pitch at the step level. The shape lane allows for the alteration of the envelope of each triggered element in a wave sequence and, while this provides control of the attack phase, there are also gated-style triggers to give the perception of a doubled tempo.

It’s also possible to send the shape element to pitch, and to control the pitch modulation. Similarly, the gate lane affects the length of time that the note is held open, a little like the sustain element of an envelope but at the step level within the wave sequence. This premise continues with the timing lane, which affects the length of each step, and the step seq lane, which allows you to set the parameters of individual steps.

Dedicated pots allow for the simple selection of start and end points within lanes, and you can randomise virtually any parameter to keep things fresh.

Some of the Wavestate’s fundamental programming is simple. There are buttons that allow for the selection of layers, as well as activation or deactivation via a double-press. The display shows you all seven lanes simultaneously and responds to the selection of lane-based parameters. It’s helpful for highlighting how many steps each lane has, as they don’t have to be the same length – an attribute that can result in some cool cross-rhythmic interaction. To control individual steps, move towards the bottom right of the panel, to the 16 step buttons. Pressing these will bring up the connected step on the display, allowing for immediate and easy editing. By using these alongside the value and navigation buttons, switching lanes and steps and controlling parameters becomes a straightforward process.

It takes some getting used to, true, but it’s enormously simple compared to navigating the Wavestation SR. This is the sort of interface I’d have given my eyeteeth for back when my trusty SR was my main machine. Doubly appealing is that each lane has a dedicated modulation knob, which can be used as a live-performance element, bringing another level of contemporary interaction to the Wavestate.

The Wavestate boasts a startling selection of filters – 12 on release. They are mostly digital models but there are a few brilliant facsimiles of such synths as the six-voice Korg Polysix and both the low-pass and high-pass from the Korg MS-20 too. Filters are selected via a four-way toggle. Selecting More will throw open a host of other types, such as 2-pole and 4-pole low-pass, high-pass, band-pass and even band-reject filters. There’s also a multi-filter option that combines two filter types, should you want the full high/low-pass experience.

If you were to compare the MS-20 filter to the original synth, it’d be tough to draw immediate comparisons, largely because the source content is clearly very different in this setting. The filter certainly has that squelch factor but seems to have a slightly digital squeal if overdriven, especially with digital tonal sources. The filters sound superb but my heart longs for an analogue filter here.

Directly below the filter, independent ADSR envelopes can be routed to the amplitude, filter or pitch, all using their own settings. Buttons to the left of the pots allow for speedy access, with the screen again providing visual feedback and confirmation. 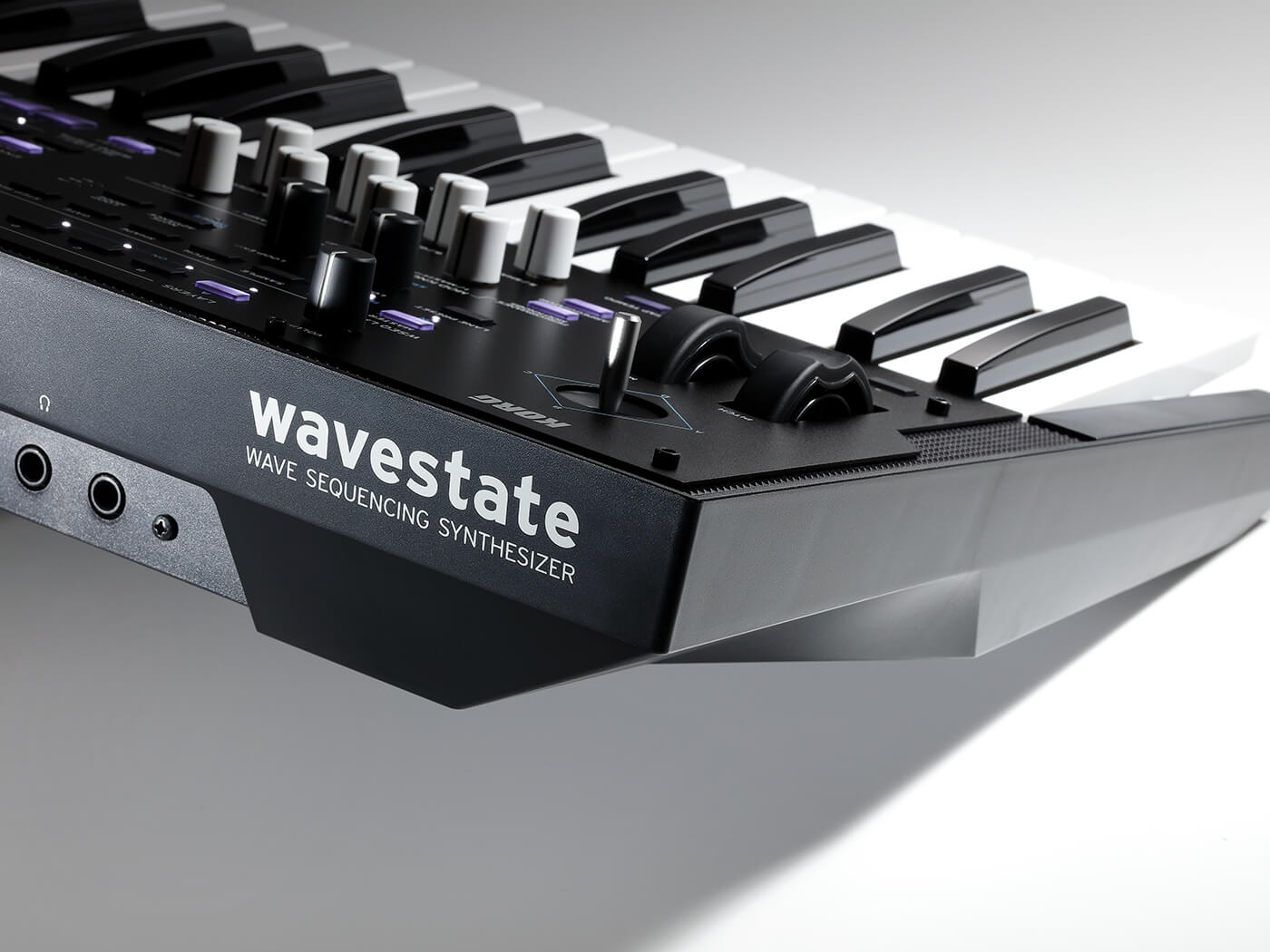 The vector envelope setting lets you automate vector movement. If you have a four-part layered sound that you’d like to morph, it may be tempting to reach for the ADSR pots, but it’s far smoother to go for the vector joystick and plot a course this way instead. Drafting a journey for each layer using independently controlled timing can yield some magical morphing tones.

Accessing the Wavestate’s substantial number of modulation sources and destinations is uncomplicated too, the simplest and most common of which is the LFO. Allocated buttons allow for directional modulation to amplitude, pitch and panning, but it’s also possible to route any modulation source to a suitable destination via the modulation matrix. The Mod button, found in the global area, by the display, will guide your path, first inviting you to select a destination, then a suitable source. All that remains, then, is to set the amount – and there you have it: modulation routing in an instant.

There’s a handy set of backend effects too – effortlessly reached via the allotted buttons and pots – which includes a compressor that’ll be especially helpful when taming the levels used in certain wave sequences. 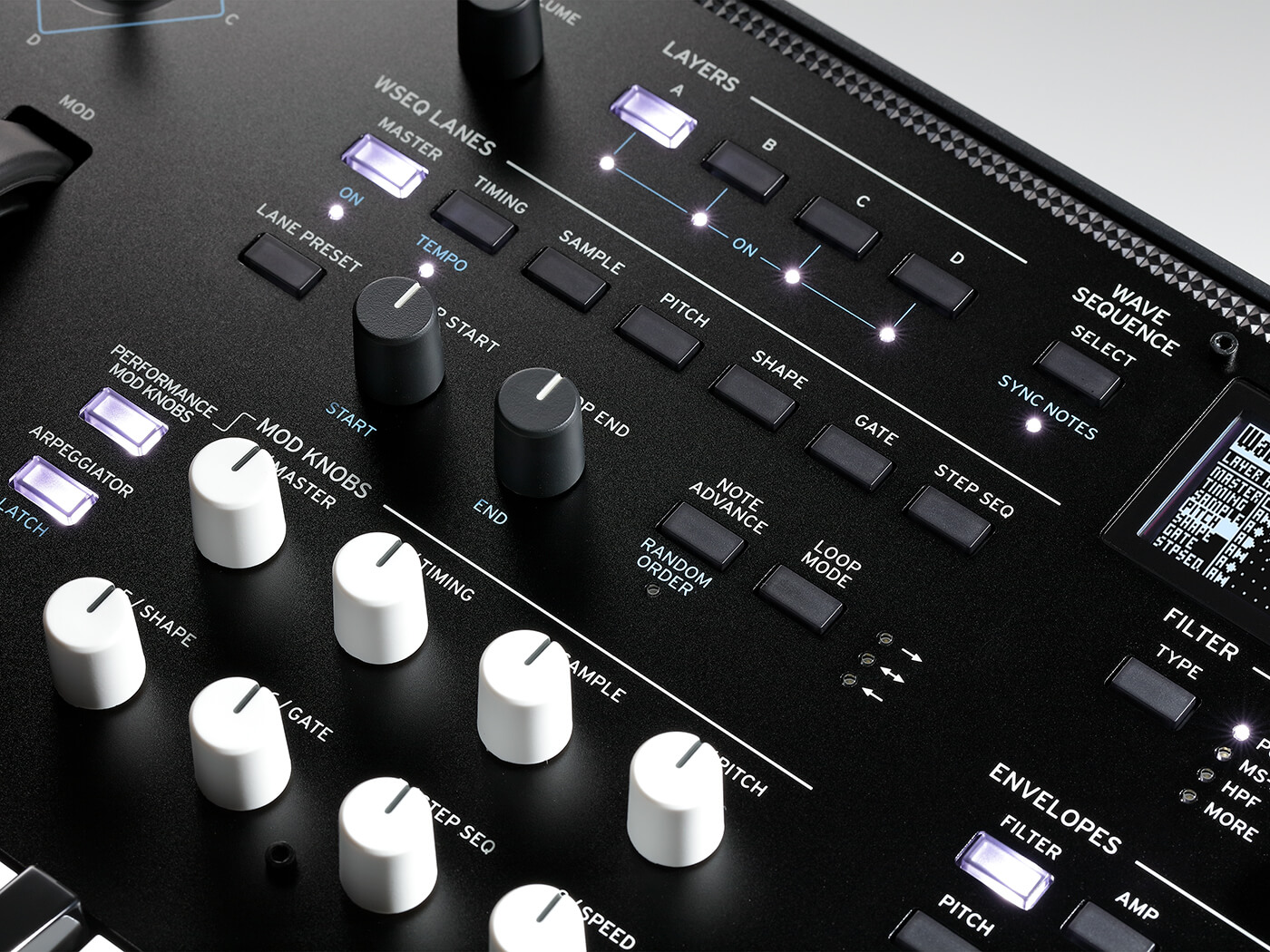 The announcement of this synth came as a pleasant surprise, with little hint from Korg that it was looking to reinvent the Wavestation. On a purely personal note, I’m happy it did. The wave sequences have a hugely endearing quality and, although you can do plenty with more straight-laced sampling techniques, there’s something unique and engaging about wave sequences for anyone who is a devotee of electronic music.

Wave sequencing 2.0 is a massive step up from where we were 30 years ago, providing a measure of programming control that was just not possible in the 1990s. The sounds of the Wavestate’s ancestors could be quite noisy and brittle too but there’s no sign of that here – unless, of course, you purposely design your sound that way. It’s still a complicated beast, not so much in its sonic architecture but with its general navigation. Programming sounds will often leave you scratching your head and wondering how to step back to where you just were. Sadly, Korg has no plans to bring out any form of external programmer right now, which would be a useful addition, and it’s a shame that it’s currently impossible to import your own samples. But the Wavestate is nevertheless packed with creative potential and substantially different to anything on the market.

There’s something mesmeric about the Wavestate that should make it appealing to anyone using electronic instruments to create music. Korg has done a fine job of updating it to contemporary standards. The sonically diverse synth invites users to really dig in to their patches – or to sculpt new ones altogether. The Wavestate isn’t petite but you’ll be pleased with its pot-laden physical form if you find yourself doing any patch alterations.

Whether you’d consider buying the Wavestate purely on the basis of its available samples I’m not sure but, if that’s what you’re after, Korg can surely find you something with stronger credentials in the traditional sample-playback arena. With wave sequencing 2.0 built into its very nature, this is a unit that should, at the very least, pique your interest. 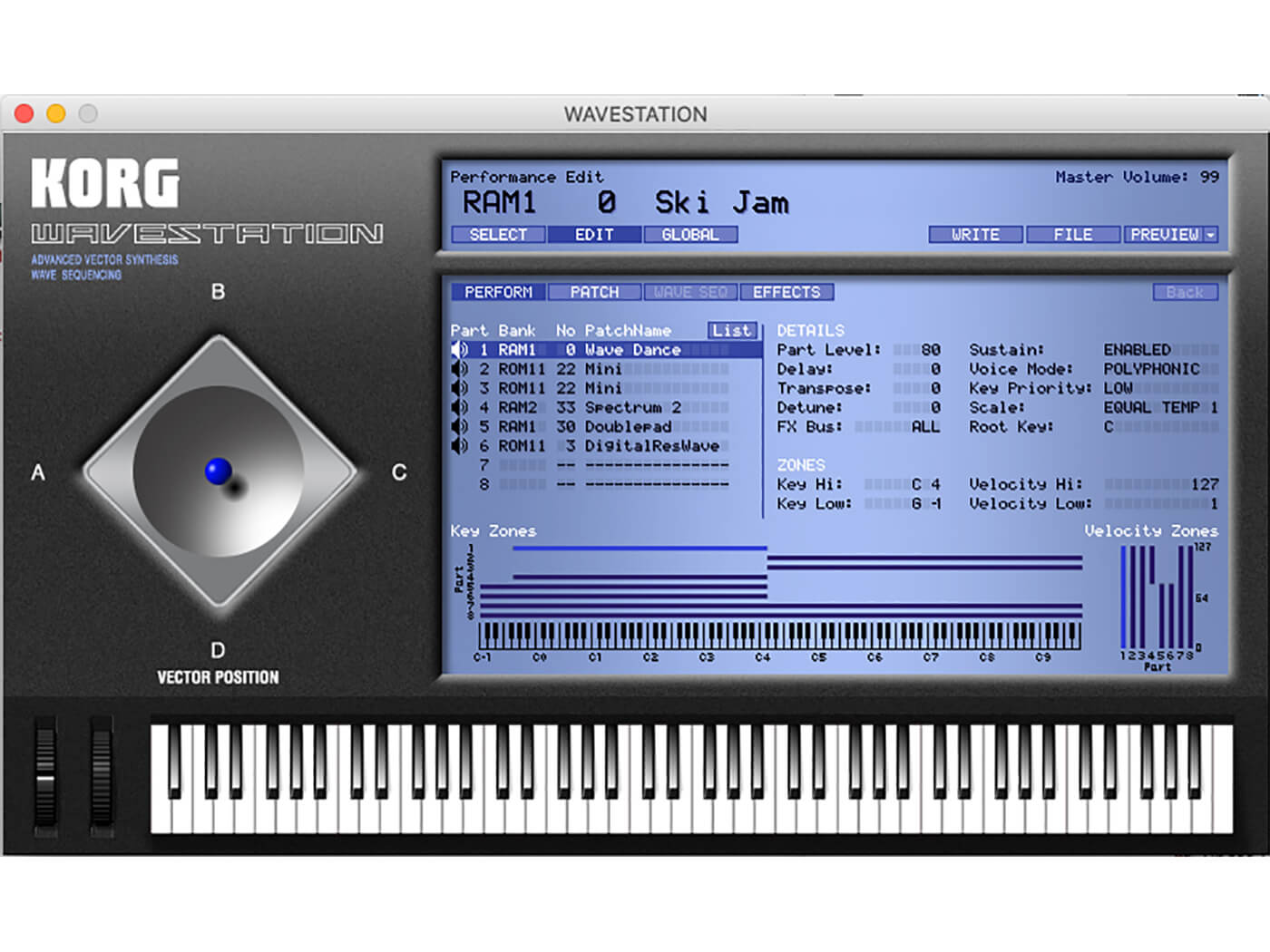 Korg’s own virtual version of the original Wavestation is a fascinating facsimile. Onscreen editing does away with the programming faff of the original. Also available as part of the Korg Collection suite. 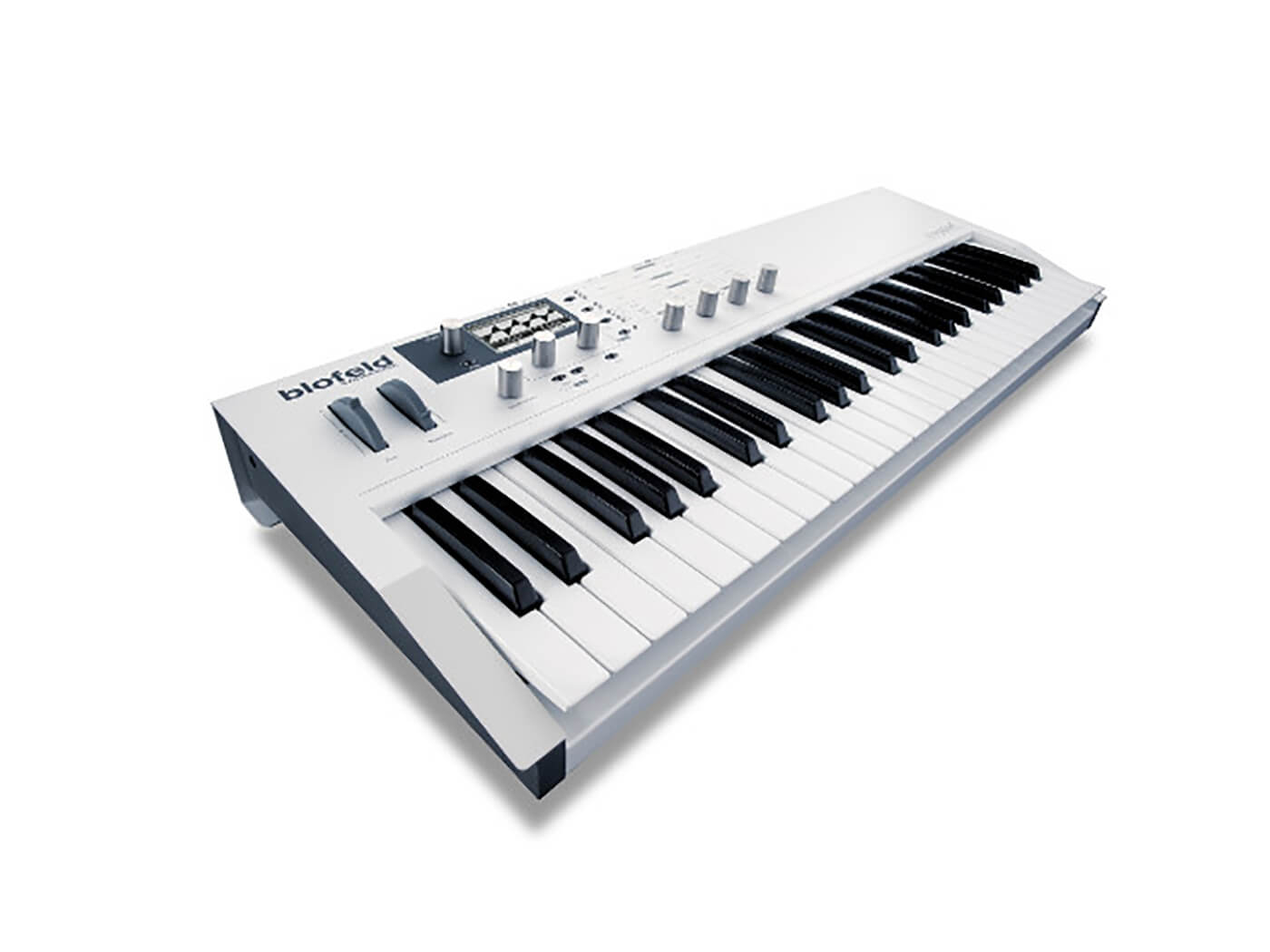 The Blofeld Keyboard provides some similarly interesting tonal functionality when you take into account its fidelity to PPG’s (Waldorf’s) wavetable technology, which can be utilised to create effects close to those crafted using the Wavestate’s vector control.