Korg brings us the Volca Nubass, with extra growl, warmth and acid power by way of valves and an overdrive circuit. Is it to be, or not to be? 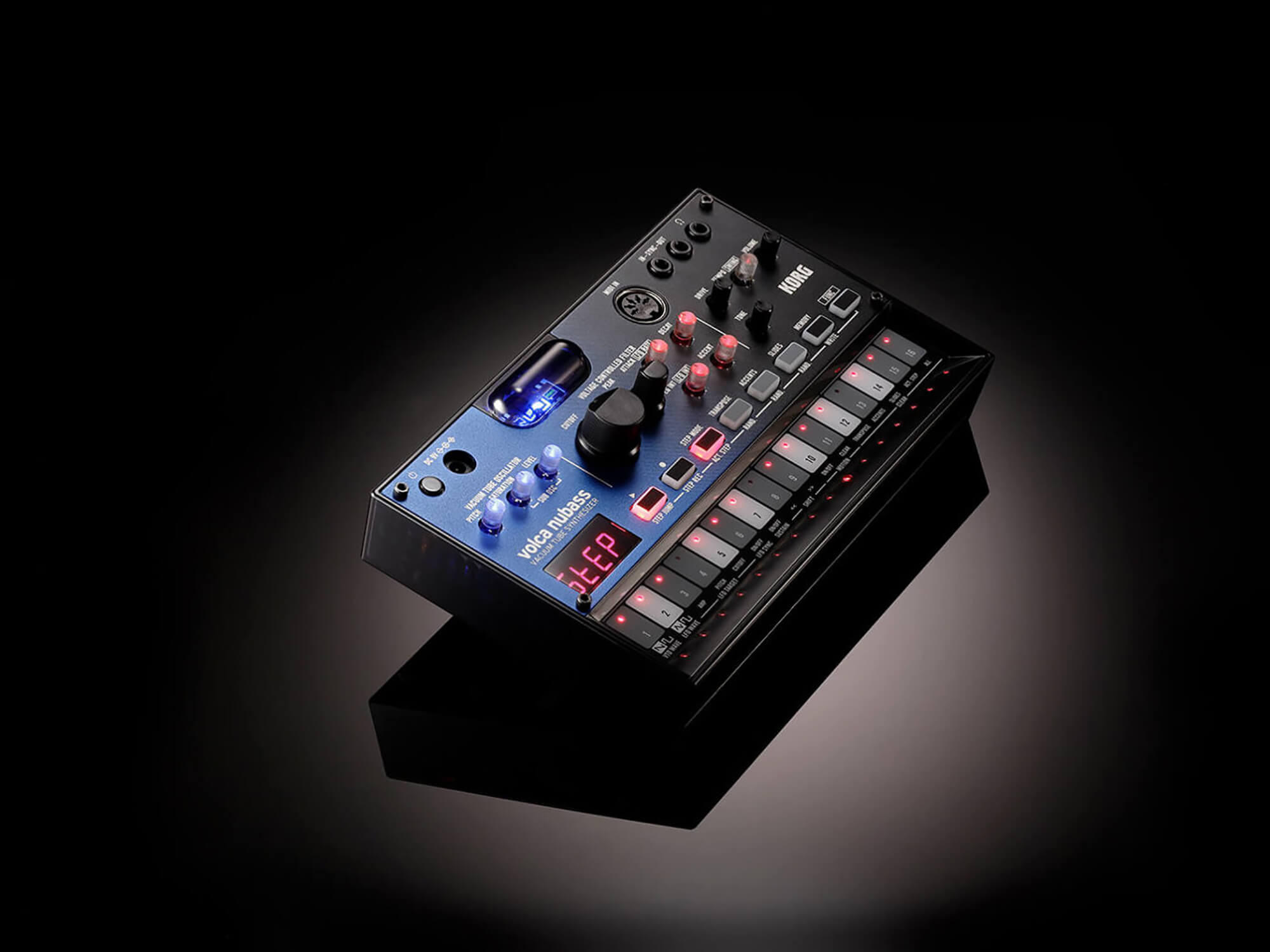 Nubass might be a bit of a one-trick pony, but it’s one of the best ways to get deep and dirty acid sequences and, importantly, fun and easy to use.

I seem to have been writing about the enduring appeal of the Acid bassline for most of my journalistic life. For those too young or who have been in a cupboard for the last 30 years, the Acid bassline was born out of the Roland TB-303, a bass machine originally designed to accompany guitars but then famously used and abused by a generation of ravers from the late 80s onwards. Its part in the formation of dance music – along with TR drum machines, a fair slice of naivety, good fortune and drugs – cannot be understated and its sound remains with us today.

However, that sound now rarely comes from the original machine – now so hugely expensive and the very opposite of why it was taken up so readily in the late 80s – but from clones, software versions and many Roland rehashes. Korg’s Volca Bass was one such imitator, released back in 2013, and part of a range of Volca gear that will, one day (if not today) be acknowledged as being a major part of today’s analogue revival. This range proved you could do analogue on a budget, which some of the bigger guns in music technology refused to admit at the time. Five years on and we have more analogue synths – at ridiculously cheap prices – than ever before.

Volca Bass did well, so much so that Korg has now added to the bass line, creating, “an acid bass machine for a new generation, that combines classic sound with the power of modern synthesizer design. It’s the Volca Nubass.”

At the heart of Nubass is Nutube, a dual triode valve that’s used across the unit’s main and sub oscillator architecture. One of the triodes is part of the main oscillator which can generate a sawtooth or square wave, while the other is in the signal path to provide drive and rich harmonics. Combine this with the transistor ladder design LP filter, a 16-part sequencer and an analogue drive circuit and we should have a bass machine capable of classic acid with added grit, warmth and squeal. For a new generation indeed…

Unboxing Nubass and you get a very familiar and instant Volca feel. It’s the same size and feel as the half dozen other Volca units I’ve tested, with the touch keyboard, rotary controls and buttons. It’s also the same weight – that’s pretty light, minus the six batteries (which are supplied; an optional power supply isn’t). The big difference this time, though, is the big tube, or valve, that sits towards the top of the unit. This glows in two ways when you push the Saturation and Level dials on the sub oscillator.

It’s important to note that, as with some other Volcas, you approach Nubass creating with a single sound; there are no presets – you are just morphing with one sound across 16 sequences. So it’s all about what you can do with that sound and, as we’ll see, there is a lot. A quick scoot across the rest of the front panel reveals large filter controls, with EG dial which, as with the TB-303 (and not like other Volcas), is tied to the filter rather than VCO. This is followed by the Analogue Drive section with Tone and Drive controls. Like the sub’s Saturation and Level dials, Drive and Tone are big factors in the Nubass sound. They all change it fairly radically through the on-board speaker, but you’ll be better hearing the deeper harmonics that through your studio speakers. And even bigger changes in sound happen across the sequences when you start to automate and record Motion, so moving to that… 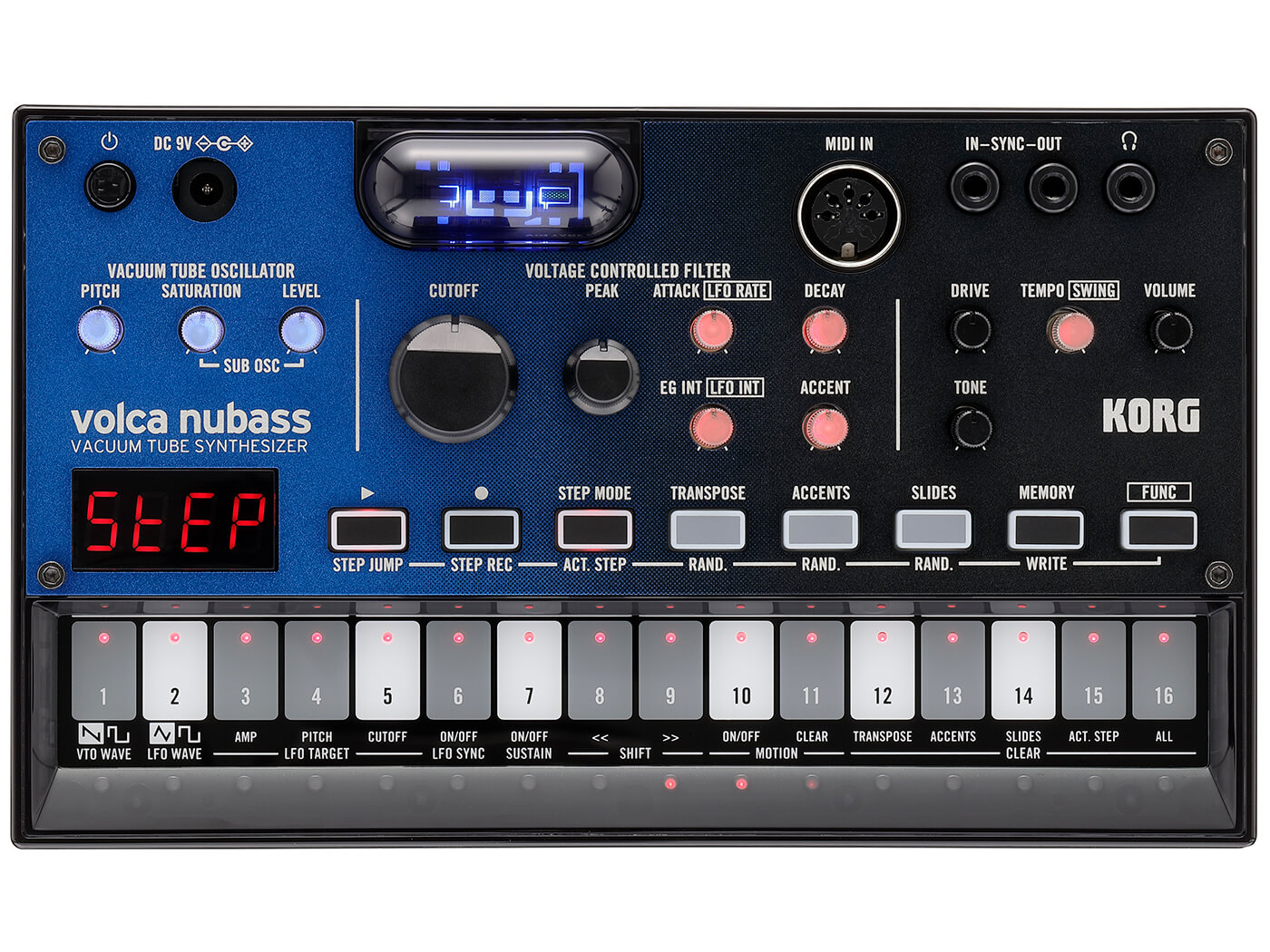 There are a variety of ways to play back and record sequences on Nubass. Simply hit Play to hear whatever pattern you have loaded (from 16 – press the Memory key and one of the 16 buttons to load them in). You can record notes in real time around a loop by simply hitting Play/Record and then playing the desired notes. Press Record and Function at the same time and you enter Step Record mode where each note press will record that note and step onto the next of the 16 steps to record that. You can then enter Step Mode to turn steps on and off, and in all modes you can record motion (knob turns etc) by pressing the Function button and Motion On/Off.

After Step Mode, you get three more main options: Transpose, Accent and Slide, very much important parts of the acid sound as you can easily alter the characteristics of each note. In Transpose Mode, a single press of a note button takes it up one octave, while holding it results in the note flashing and it raising by two octaves. Similarly in Accent Mode, one press raises the growl per note by a factor of one and a hold (and note flash), by a factor of two. Finally, the Slide Mode is where your 303 slipping and squealing fun starts as you ram notes into one another, again with a factor of one press or hold for the flashing maximum effect.

It’s here you realise that the growling Accent and squealing Slide are what the Acid sound was and is all about: the sliding of notes into one another and with the accented modulating sound. This, tied in with the hands-on easy control on the original unit, is well emulated here.

You then turn to the Filter and the Frequency and Peak controls for that gradual build into huge ecstatic bass-to-lead building; then drop everything else away and bring it all back in with a huge 909 four-four kick. Suddenly it’s 1992 all over… Sorry, getting a bit misty eyed there.

Moving finally to the Function button and this is used to access more parameters, each of which is beneath one of the 16 buttons. On a simple level, you can clear slides and accents on notes, everything in a sequence, or use it to clear whatever motion/automation you have recorded. On a slightly more complex level, use it to choose your oscillator or LFO waveforms.

Function keys 3 to 5 are where you can get some incredible squelching action by way of the LFO. They variously get the LFO to control Amp, Pitch and Cutoff frequency and can be very dramatic. – there really is a surprising amount to do with your sound and sequences here. 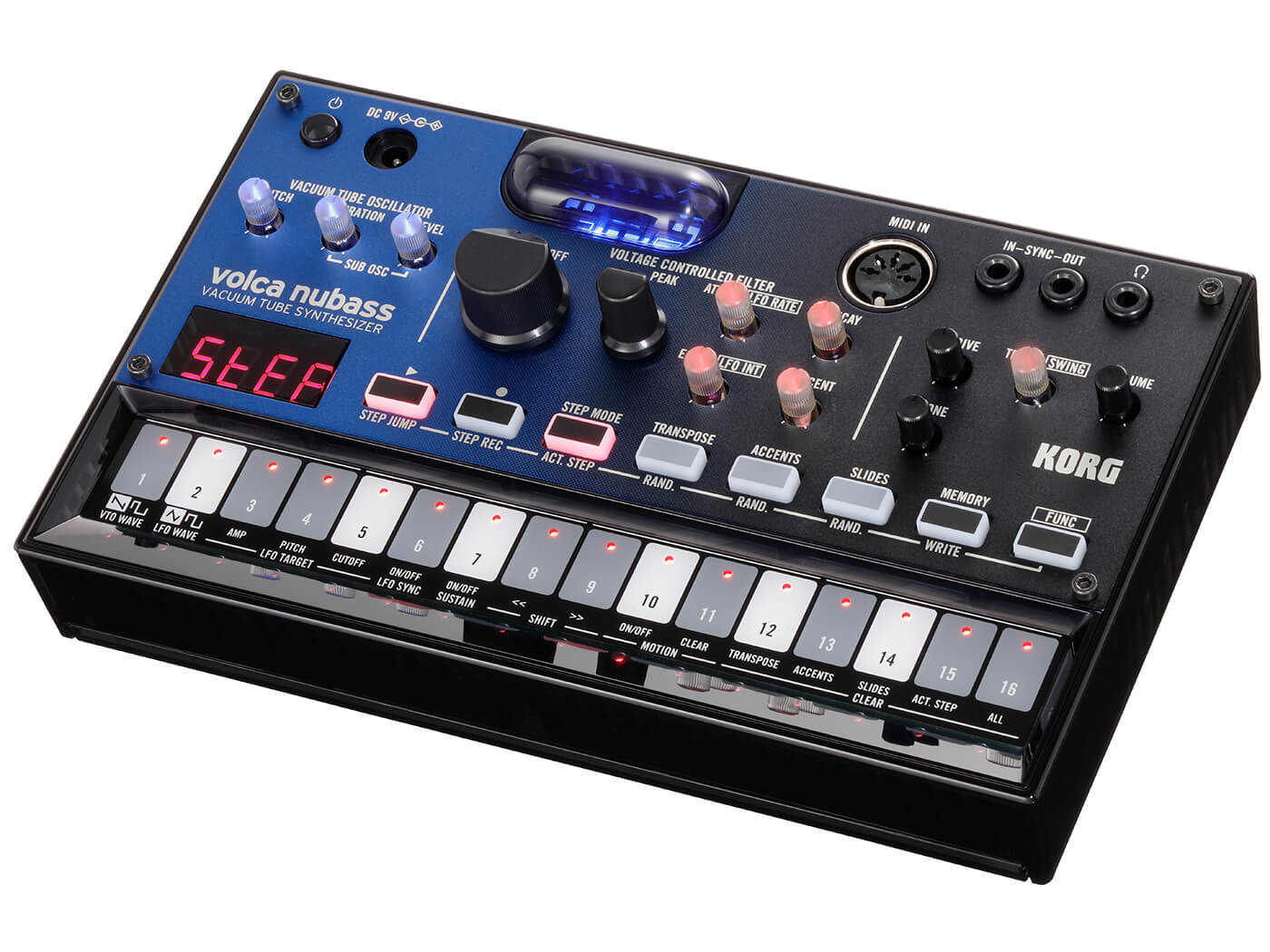 You can get some great and growling acid lines from Nubass, of that there is no doubt, and it’s going to give any other piece of dedicated bass hardware a run for its money. The additional tube is not just a gimmick – it really does drive the sound well. Nubass is a bit of a one-trick pony in some regards though, but it performs that Acid trick admirably. Twenty years ago we’d have been falling over each other for a box this good and at this price.

Other options do the Acid sound well, but whether they do it with quite the bravado and guts that Nubass offers is debatable. It’s deep, down, dirty and pretty damn ‘volca’ cheap, so if this specific sound is your goal, it’s a must to audition. The squeal is very deep in this one.

Compared to the original volca Bass, Nubass is all about the drive and warmth that the Nutube and Analogue Drive section bring in. It is not perhaps obvious, given the unit’s small speaker, but it is certainly there when you crank the unit through a decent set of monitors. If you own the original Bass, though, Nubass is not an essential upgrade (nor is it really an upgrade, more of a sidegrade). There are, of course, many other ways of getting that acid sounds these days, in everything from freeware to new Roland hardware that perfectly emulates the original 303. I do like the way the Slide, Accent and LFO features are implemented here, though, and after what is a very shallow learning curve you’ll be splitting your speakers with sliding and screaming Nu tones aplenty. 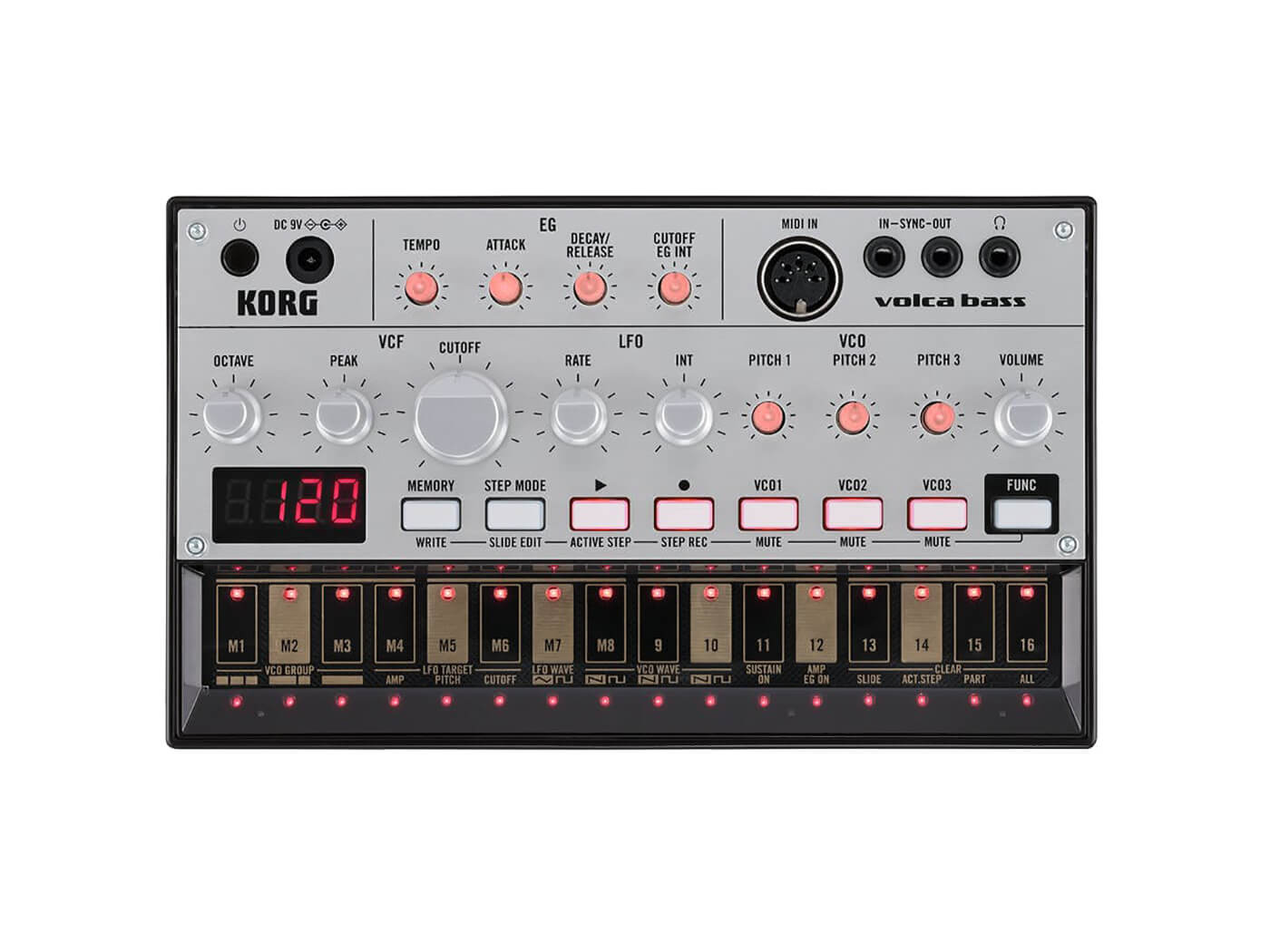 The original Volca Bass is still a great buy and can be snapped up even cheaper if you look around. It features three oscillators for fatter and more detuned sounds if you want them, but not as much drive and distortion as Nubass. 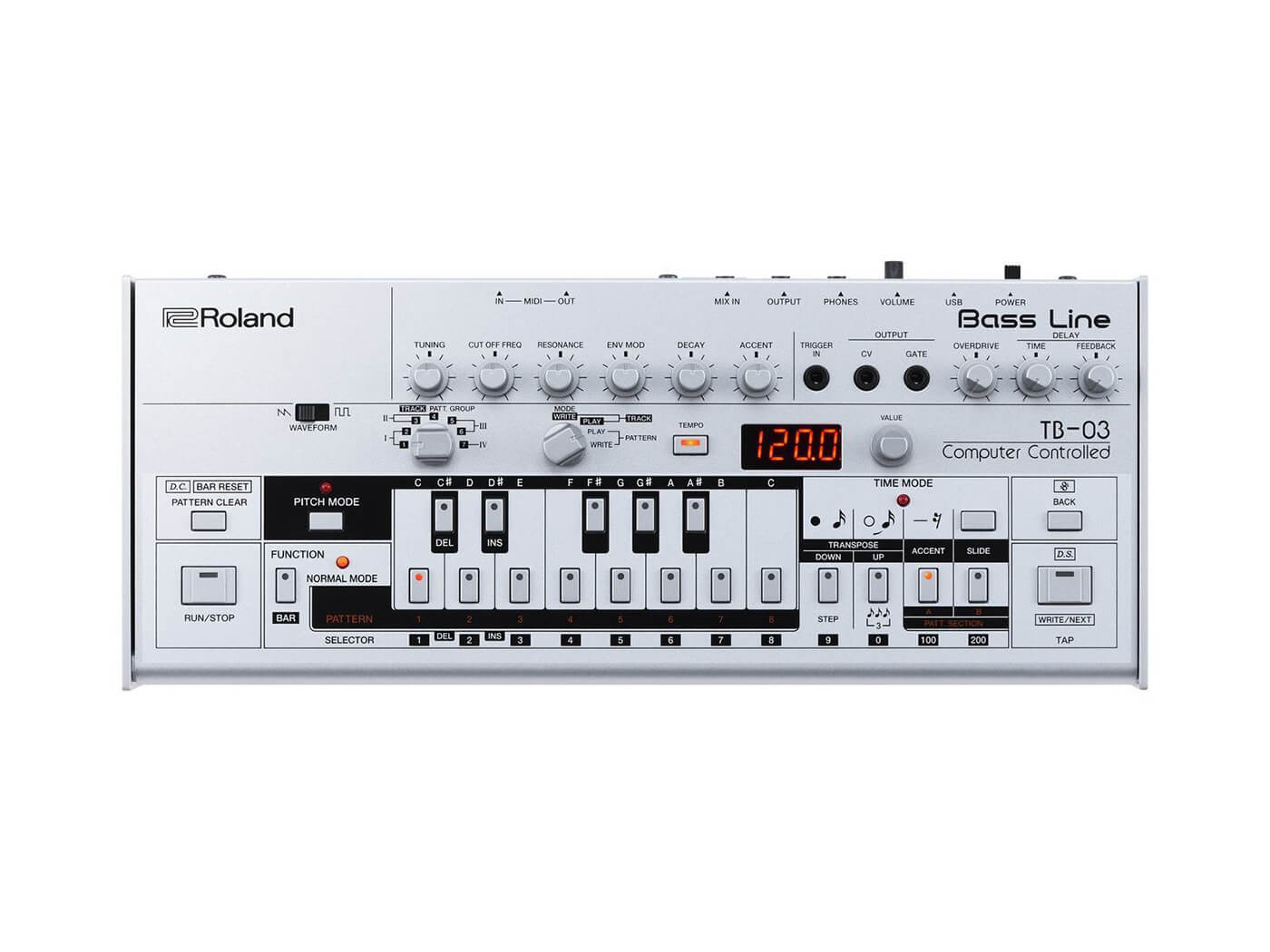 Roland’s emulation of the original 303 is pretty much on the money, with all of the original features there or thereabouts plus some modern sensibilities and connections packed in. It is more expensive than Nubass but packs a lot in.