Eventide TriceraChorus review: A chorus pedal as ferocious sounding as its namesake

Like its reptilian namesake, the TriceraChorus takes a three-horned approach to chorus-based modulation across three chorus voices: Left-Centre-Right. 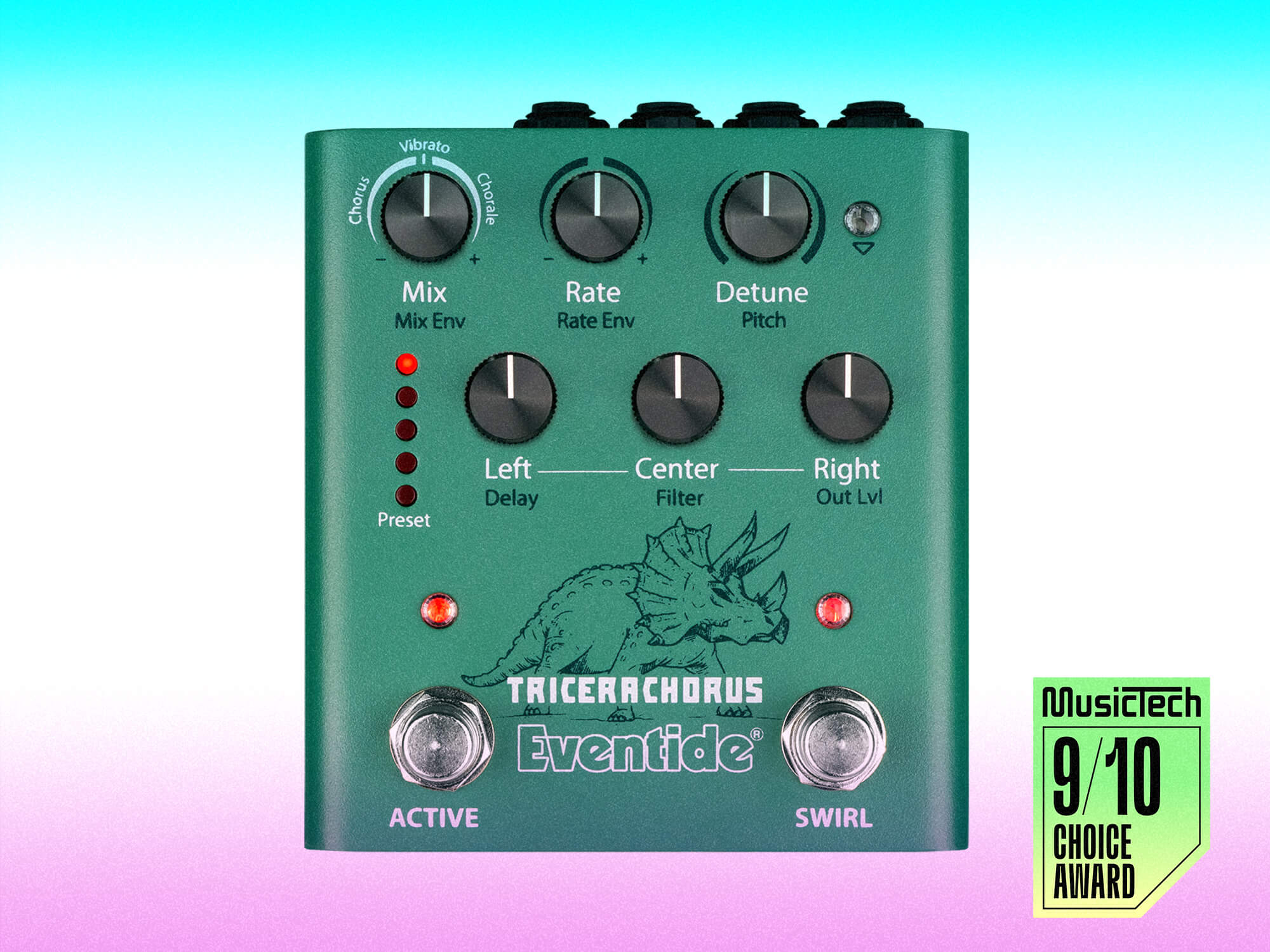 The latest release in Eventide’s stompbox line of effects is a modulation pedal – the puzzlingly named TriceraChorus. When we first heard about this effect, we couldn’t work out what dinosaurs had to do with deep modulation effects, but it all soon became clear. This pedal is an excellent Bucket Brigade-inspired chorus and modulation effect. With three different stereo depth levels and three modulation types, the TriceraChorus, like its namesake, really is a three-horned beast.

The pedal is in the same format as Eventide’s other twin stompbox effects with six rotary knobs and three small LED buttons. One button acts as a shift function and each knob then gains a secondary function. The pedal comes included with five preset cards that indicate the positions of the various controllers to create specific sounds, which are a great starting point to understand how each control is affecting the sound.

The TriceraChorus is inspired by bucket-brigade devices from the 70s and early 80s and features separate delay times for the left, right and centre channels, and some elements from Eventide’s own MicroPitch effect to create further modulation between the three channels. 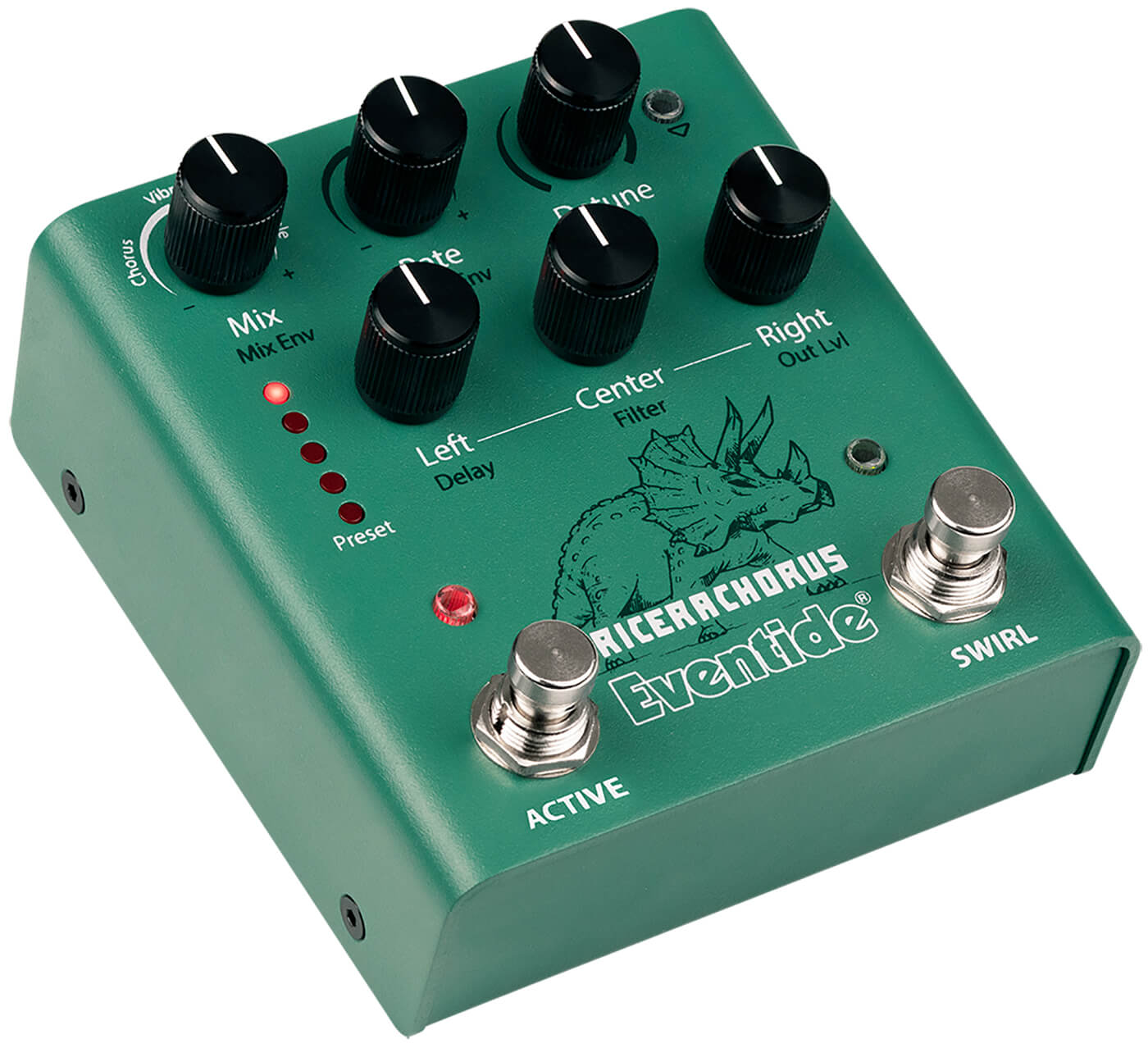 The first source we used the effect on was an acoustic guitar. The guitar was already captured so we routed the signal out from our interface (an Audient iD44), set the TriceraChorus to Line level input, and routed the audio back into our DAW.

The effect sounds amazing on acoustic guitar – it made the instrument sound thicker and richer, and gave it a slight 80s feel. The ability to adjust the number of chorus voices means that it’s very easy to dial in the exact level of chorus that you want.

Chorus works by splitting a signal, delaying one side, and then modulating the pitch of the delayed signal. If you remove the dry signal entirely, you get vibrato. The TriceraChorus offers vibrato at the 12 o’clock position for some less subtle modulation effects. Beyond the mid-point the pedal moves into the Chorale effects which are closer in sound to some of the early-80s rackmount effects and are a more subtle form of thickening and modulation. These sound great, but we found the best sounds to be in the chorus side of the effect. 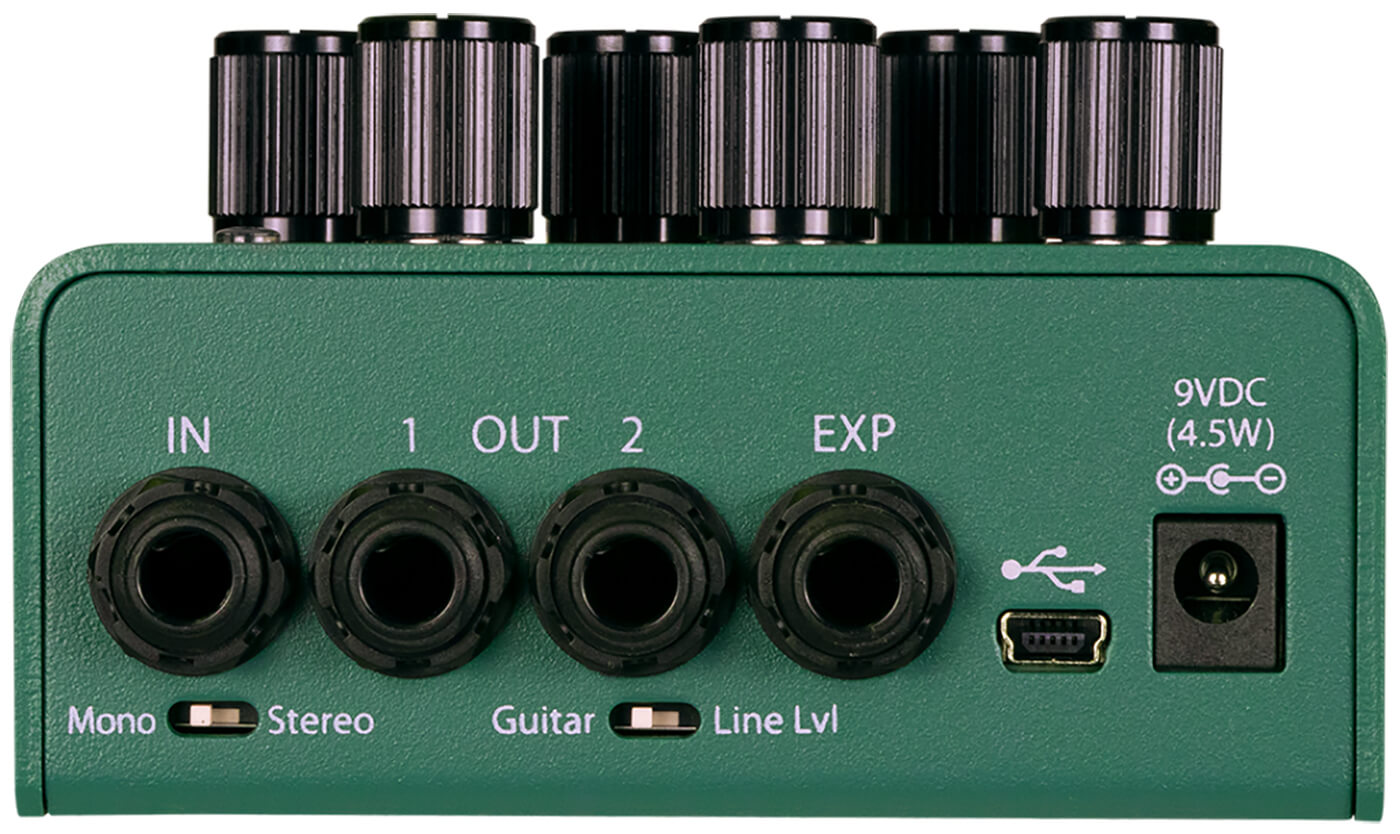 Next, we tried the TriceraChorus on an electric piano and explored some of its modulation controls. Having separate depth controls for the three separate channels ensures real stereo width on the sound source. The electric piano part was already recorded in stereo, so having the ability to adjust the separate stereo depth on the chorus ensures a perfect width of effect.

At this point, it is worth exploring the detune and pitch functions to enhance the difference in tuning between the separate channels.

These functions have the effect of making the chorus effect sound more pronounced without changing the depth control. The pitch control, in particular, can be used quite subtly, but still have a massive effect on the sound.

The electric piano needed a lift in the bridge section of the track, so we added the ‘Swirl’ effect on the TriceraChorus, which comes with a dedicated footswitch button.

Eventide claims this is a sort-of phaser, sort-of Uni-vibe, sort-of a rotary effect. It’s a very deep level of additional modulation that takes full advantage of the stereo field and really does make the overall sound very swirly.

The TriceraChorus has a ‘momentary’ option that can be engaged by pressing and holding one of the LED buttons. By combining this momentary mode with the Swirl function, it is possible to get some really interesting temporary modulation for individual notes. This can be very useful as a production tool for enhancing a track at certain points.

The TriceraChorus is a very powerful modulation pedal and could be the ultimate chorus effect for a lot of people. It contains a wide range of BBD-inspired modulation effects which are highly adjustable for creating the perfect effect.

The pedal, however, is actually quite complicated to use. It does take a while to get your head around it due to its deep level of flexibility. But with 5 presets available on the panel, and more when controlled via MIDI, It’s easy to save your perfect setting once you’ve found it.

This pedal really does need to be run in stereo to take full advantage of the sounds. If you aren’t used to running pedals in stereo, now is the time to start, because this pedal will really make that switch worthwhile.