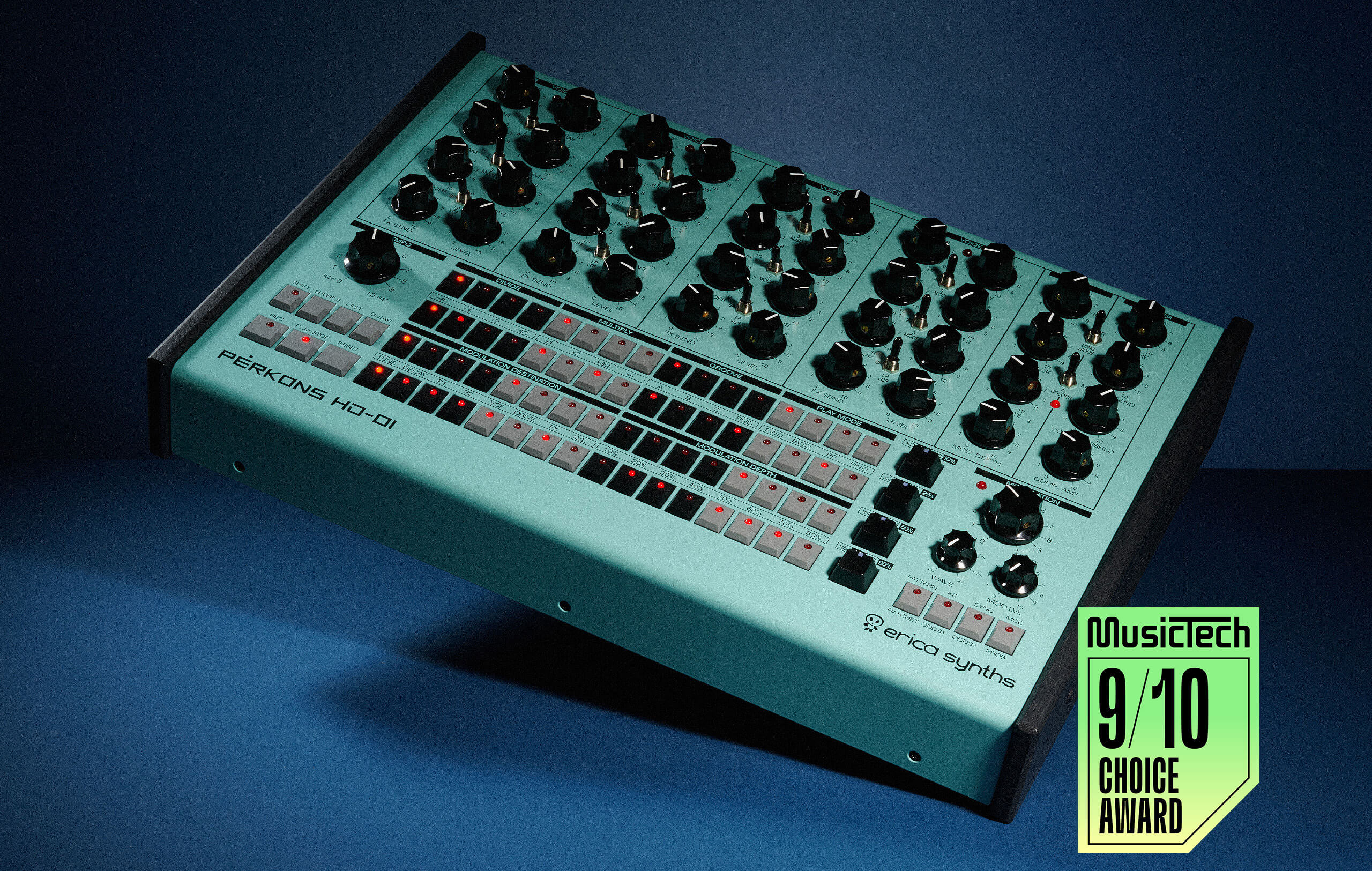 The venerable Latvian company doubles down on large-format desktop gear with a brand new analogue-digital hybrid drum machine. Will it live up to the Erica gold standard?

⊖ Could use a display for tempo, pattern number and so on
⊖ Different voices could be more visually differentiated
⊖ Definitely on the pricey side

Erica Synths, you might say, is a sequencer-crafting expert. From Eurorack modules such as the revered Black Sequencer to standalone instruments like the celebrated LXR-02 Drum Synthesiser and DB-01 Desktop Bassline, the company does not pull punches when it comes to power, playability and, often, originality.

A little context, since the name Erica Synths may not be overly familiar to you if you operate outside the realm of Eurorack: with humble beginnings in the realm of DIY (something it still excels at), the Latvian company, helmed by founder Ģirts Ozoliņš, has built a considerable reputation as one of Eurorack’s most respected developers. The company also has a healthy appetite for collaboration, having teamed up with a diverse array of external minds in the name of progression and innovation. These range from designer Moritz Klein, with whom Erica Synths developed the highly successful mki x es.EDU range of educational DIY kits; all the way to London-based record label Ninja Tune, with which they produced the Zen Delay effects unit.

All of this is demonstrative of the fact that, for Ozoliņš and co, nothing is really off limits. The company describes itself as “a team of visionaries, engineers and musicians,” and in recent months and years has seemingly diversified with an ever increasing sense of ambition. With the addition of the formidable SYNTRX synthesizer, now in its second iteration with the recently unveiled SYNTRX II, and the PĒRKONS HD-01 analogue-digital hybrid drum machine, explored forthwith, one senses that the company is steadily moving into a new and exciting chapter.

Perhaps we say this because the PĒRKONS HD-01 and SYNTRX are not only almost exactly the same size, but they’re far bigger than any of Erica Synths’ previous standalone instruments. Measuring a hefty 45cm by 32cm and weighing almost four kilograms, unboxing the HD-01 feels akin to the experience musicians would surely have had unboxing the original Roland TR-808 or 909 in the early 1980s: it’s a weighty, two handed machine replete with push buttons and generously-sized knobs, housed in a light teal metal chassis and flanked by attractive wooden panelling. In a world of software emulations and scaled-down reboots of classics— not to mention component shortages and market challenges for developers at all strata— the PĒRKONS HD-01, you might say, feels celebratory and unashamedly physical.

Four hybrid voices constitute the core of the HD-01 (whose acronym stands for ‘hybrid drum’), each consisting of a digital sound engine and analogue multimode filter. Pērkons, by the way, is the name of the Lithuanian and Latvian thunder deity. “And we do not give such a name lightly,” says Erica Synths. A separate sequencer for each of those four voices provides the HD-01’s transport, which also boasts extensive performance features, well-equipped modulation and effects sections to serve up expression, variation or all-out chaos to taste.

Each of the HD-01’s four digital voices offers three algorithms, each with a subset of three modes. And every voice offers eight controls: tuning, decay time, filter cutoff frequency, analogue drive, effects send and level, and also two parameter knobs, the functions of which depend on the selected algorithm and mode. That is a lot of functionality. Between those eight knobs and three switches is an entire world of variation and playability for each of the four tracks, pulling in analogue influences over its digital core to construct something rather special.

While they look identical on the panel, each voice presents its own distinct sound generation algorithm; these can be loosely delineated, from left to right, into the categories of a kick, a synth or tom midrange sound, a snare and a high hat. Considering that the HD-01 was purportedly engineered to suit live performance, an environment where clear layouts are vital (not least when it comes to the oft-overlooked importance of peripheral vision during performance), questions immediately arise about visibility.

While Erica Synths has respectably chosen not to rigidly categorise the HD-01’s sounds into conventional drum components, which would most certainly only serve to downplay and restrict the HD-01’s potential applications (with the amount of variation on offer here it’s a cinch to make a high hat out of Voice 1’s algorithm, a kick out of Voice 4 and anything in between) we could have done with something more to differentiate the four voices from one another than the HD-01’s very small text reading ‘Voice 1’, ‘Voice 2’, ‘Voice 3’ and ‘Voice 4’; different coloured sections, perhaps, or at the very least bolder numbers.

This said, there are, after all, only four sections – not the hardest to navigate, even in low light conditions, and besides, who hasn’t taken a roll of masking tape to their hardware in preparation for playing live? What does suit the HD-01 for live use is its size and its awesome tactility. From bright LEDs to the satisfying click of its buttons and the smooth resistance of its knobs, it doesn’t just feel fun to play, it’s astonishingly evocative of the workflow of classic, iconic drum machines. Punching the Play/Stop button in quick succession, twisting sounds’ Decay knobs up or down, hitting the Mute/Unmute button on different sequencer tracks and changing patterns on the fly all amount to expressive performance gestures, refreshingly without a screen in sight.

Each algorithm selector and mode selector switch entails a range of sonic signatures tailored to each voice, from wavetable emulation to Karplus. These, combined with a mode selector switch for the filter, present effortlessly simple but classy means of changing the character of your sounds unrecognisably to give them totally different roles within a pattern. They can also be used to add emphasis or build momentum within a pattern: flick your kick drum’s filter into high pass mode and mute your snare to build up to an effective drop, for example, or apply bandpass to all four voices to achieve the lo-fi drum sound heard introducing many a classic house tune.

On top of all of this is the PĒRKONS’ capacity for dynamic performance. Hold the Record button and tweak any of a track’s parameters, and it will recite those movements back with the next pass of the sequencer transport, which also presents ratcheting, simple pattern selection, last step selection and much more. There’s also a wave-variable modulation matrix for even more variation.

In the absence of a screen, some things become slightly convoluted: to display the exact tempo, for example, the sequencer buttons must light up with multiples of 100, 10 and 1 on different rows like a kind of LED abacus, when surely a simple seven-segment display wouldn’t have been a stretch to include. On the other hand, this also means that for the most part the PĒRKONS’ functions are accessible with just one or two button pushes, meaning that once familiar with its workflow becomes incredibly quick and easy. Hit Shuffle and use the sequencer buttons to specify a track-specific value, for example, or the Last button and any sequencer button to edit the length of any track. Hit the 3rd and 4th keys on the far side to nudge the tempo like you would a vinyl record. Simple, powerful and fun.

The master section of the PĒRKONS presents a pleasant sounding bucket-brigade delay emulation, ready to be dialled in as an effects send on any voice. It’s capable of self oscillation, though never quite threatens any analogue chaos. One is perhaps inclined to ask whether or not the synth world’s love for the BBD sound was worth sacrificing an actual analogue delay for, but in any case it does its job nobly and doesn’t overpromise as far as onboard effects go. There’s also an onboard master bus compressor, which we deem nothing short of a touch of class – the icing on the cake when it comes to achieving some serious punch from a pattern.

The PĒRKONS HD-01 is most certainly worthy of its name, and then some. While it’s capable of truly thunderous sounds, it can also happily handle delicate details, ominous drones, satisfying rubbery toms and watery filter sweeps. We’ve mentioned the drum machine’s name a few times this review, but that little ‘-01’ denotes what we all hope for: that Erica Synths has no plans to stop here with the PĒRKONS range.

“I believe it will outlive all of us!” Ģirts Ozoliņš joked with //MusicTech// earlier this month. “I’m happy. With PĒRKONS we’ve managed to make a statement in the drum machine category.” He’s not wrong. An instant classic? Perhaps. The PĒRKONS HD-01 is certainly on the pricey end of the drum machine spectrum, but we believe your money is better spent here than on a big-name vintage groovebox with less functionality. What we can say for certain is that whatever it is that Ģirts and his team have in store, we’re already excited.