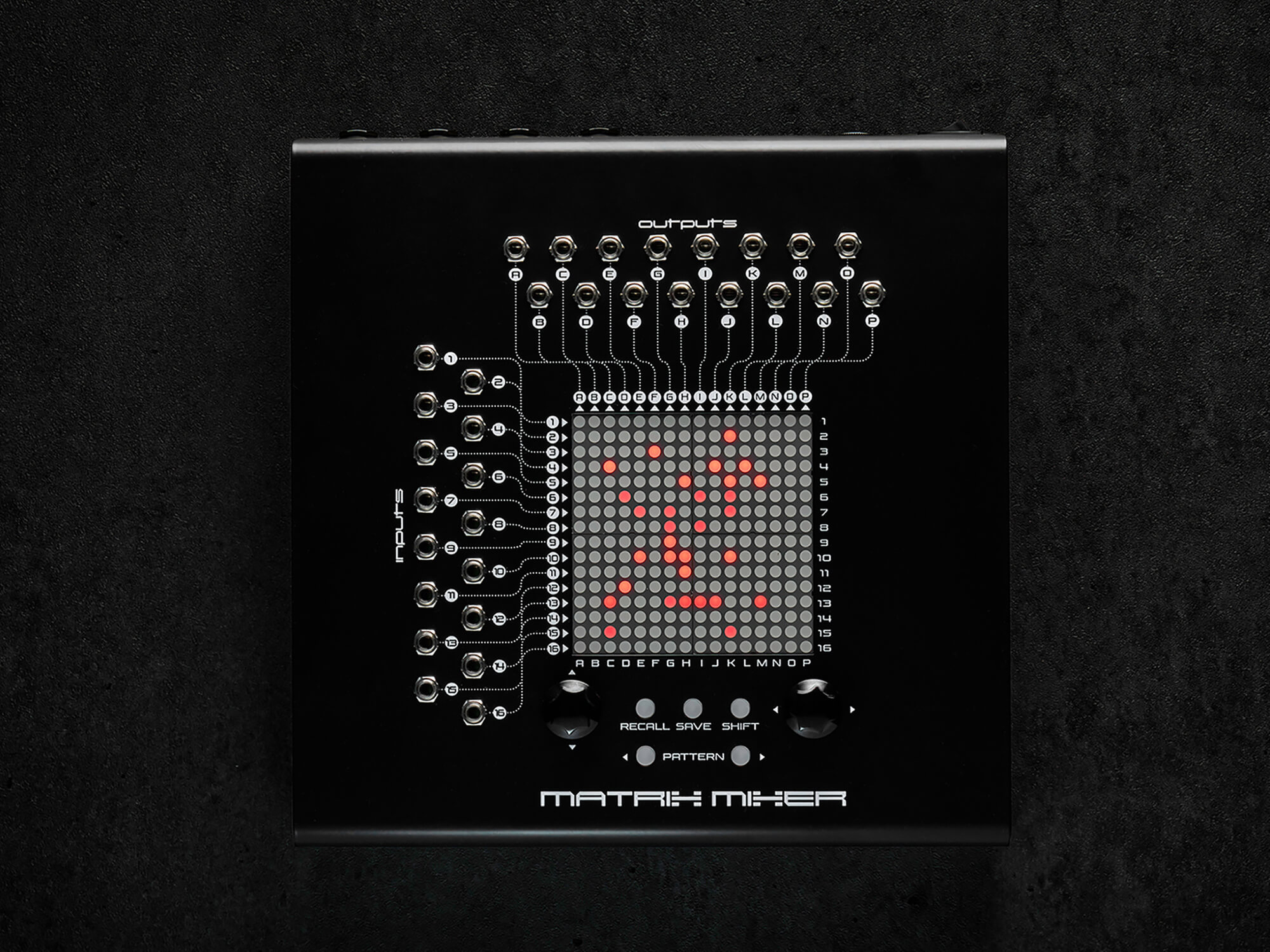 ⊕ Easy to get started with matrix style patching
⊕ Digital core allows for memory recall. Very useful for complex routing/patching
⊕ Provides a valuable connection to other studio gear outside the modular domain


When it comes to Eurorack modules, creating patches comes with a small but sometimes costly trade off. It’s not possible to save your cable work; recreating it usually requires strict note-taking, plus a photo or video of your work – and even the most accurate reassembly of a patch can lead to different results.

This is why the 1971 EMS Synthi AKS was revolutionary in its design and interface. The AKS had a matrix patching grid that used pins to connect parameters to establish a signal path. The layout and overview was so easy to navigate that it became a staple synth among experimental artists, bands and even television production companies. Enter the Syntrx from Erica Synths, a modern take on the EMS Synthi AKS with a digital version of its famous matrix.

Erica Synths’ Matrix Mixer takes the innovation of a patching matrix and allows you to retrace synth history and convenience with your own eurorack modular system, and even extends this idea to the rest of your studio equipment.

The Erica Synths Matrix Mixer is a standalone desktop patch matrix that can route and mix signals, create buffered multiples, store patches and randomise patches. It can easily interface external instruments with your Eurorack system, and is not limited to Eurorack use alone. It is a fascinating hybrid hub of mixer, multiple and patch note taker with a splash of inspiration by way of randomness.

The Matrix Mixer has 16 independent, buffered, DC coupled outputs and 16 buffered, DC coupled inputs, providing an all-analogue signal path. There are a whopping 256 possible connections and each of these has three attenuation levels, which is handy for taming signals when mixing them together. It has the capacity for 254 saved patterns, giving you plenty of opportunities to experiment, randomise and organise patching ideas.

As with all things modular, a small amount of planning can go a long way; it will take a bit of studio organisation to make full use of the Matrix Mixer. You’ll need to position the unit within the proximity of your equipment and have access to a considerable number of patch cables of the right length. We also advise colour-coding the inputs and outputs.

The Matrix Mixer does not make any sounds so you’ll need to hook it up to a modular system or hardware instrument. Simply plug your modular inputs and outputs to the Matrix Mixer.

A practical example of the Matrix Mixer in action is to connect an oscillator module to the inputs, then patch the Matrix Mixer outputs to a filter and an effect module. By using the rotary encoders, you can navigate the output of the oscillator – represented by the LED dot – to an output, such as the filter in the modular system, or an effect module. 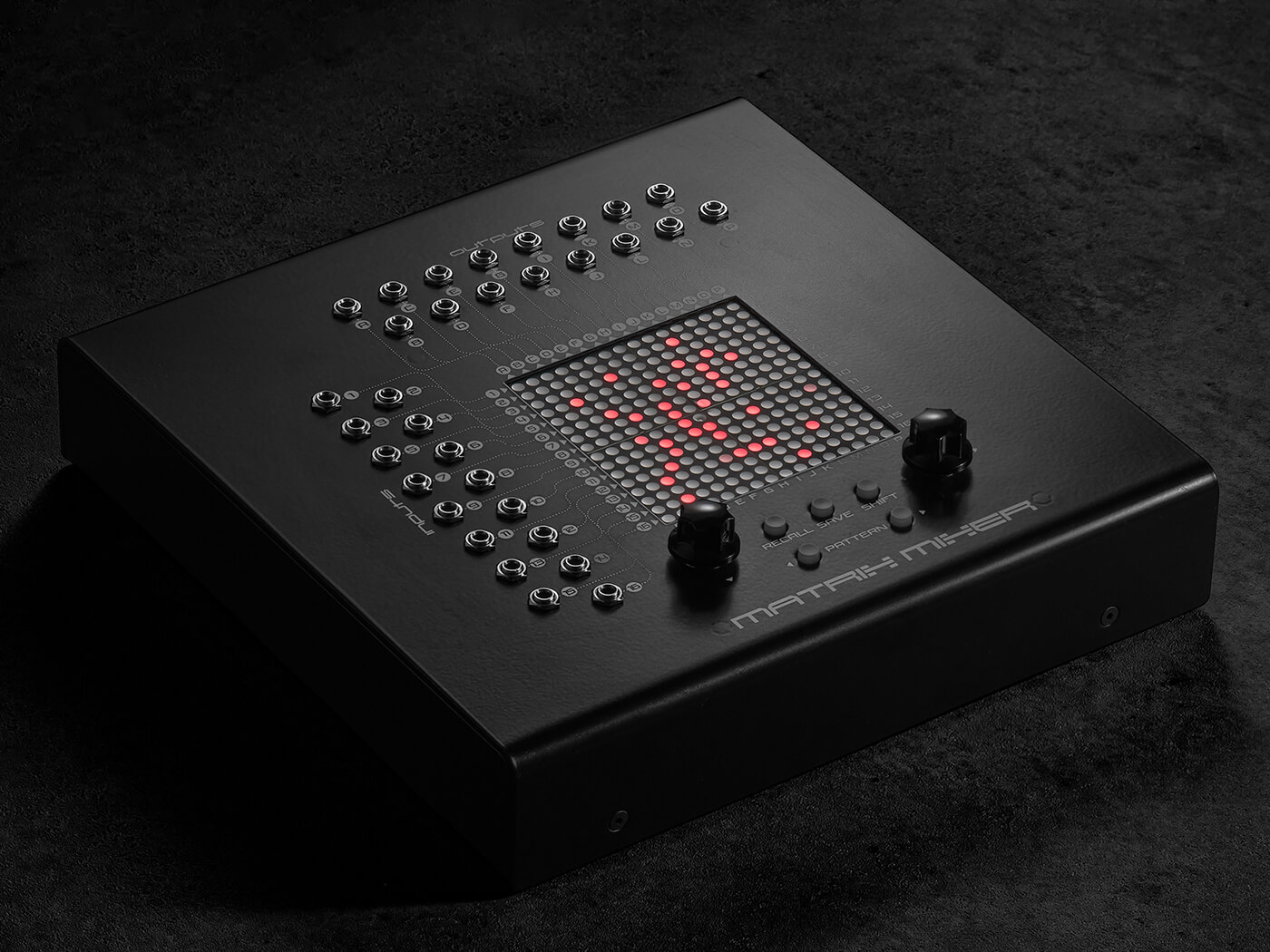 By pushing the rotary XY encoder down, you establish the patching connection, which can also be routed to multiple outputs. Therefore, using the same oscillator example, you could patch the oscillator to both a filter and effect module at the same time.

With multiple patches that are in parallel, the signal can be easily attenuated. When using the left encoder, the first push makes a connection with a gain value of 1.0, the second press – 0.7, the third press – 0.3, and the fourth press turns the connection off entirely.

The right encoder makes a connection with a gain value of 1, and pushing it a second time turns the connection off. By holding down Shift and one of the encoders while making a connection, you can even audition the connection before committing.

If logical patching isn’t giving you the results you’re looking for, make use of the Matrix Mixer’s randomisation feature. The Mixer can generate a random patch based on randomisation density and randomisation area settings with some simple shift functions on the unit. The results can be anything from astonishingly musical to downright madness but is largely dependent on how the connections are set up in the first place.

On the back of the Matrix Mixer, there are two inputs and two outputs that duplicate Input 1, Input 2, Output A and Output B, respectively. These are the portals to and from your Eurorack system and other studio hardware, and are a small but effective addition to make connectivity even more flexible. If that’s not enough, there is also the MIDI input on the rear of the unit that allows for patch changes via MIDI Program Change messages.

The Matrix Mixer encourages cable creativity. It challenges what you think you know, and there’s an intriguing meta layer to discovering (and rediscovering) the joys of patching. It feels more at home in a studio setup but could easily be used for creative performances too. The sparse manual might leave you wondering how to get started and you’ll need to invest some time to get the most out of it. But, despite a few minor disadvantages, the Matrix Mixer offers unlimited possibilities for sound design and can act as a practical hub in getting signals from one part of your studio to another. It might be the ultimate connectivity device for modular rigs and hardware-driven studios.