As the Latvian company moves away from the Eurorack modules with which it made its name, we get hands-on with its new bassline machine and ask whether it lives up to the Riga firm’s enviable reputation. 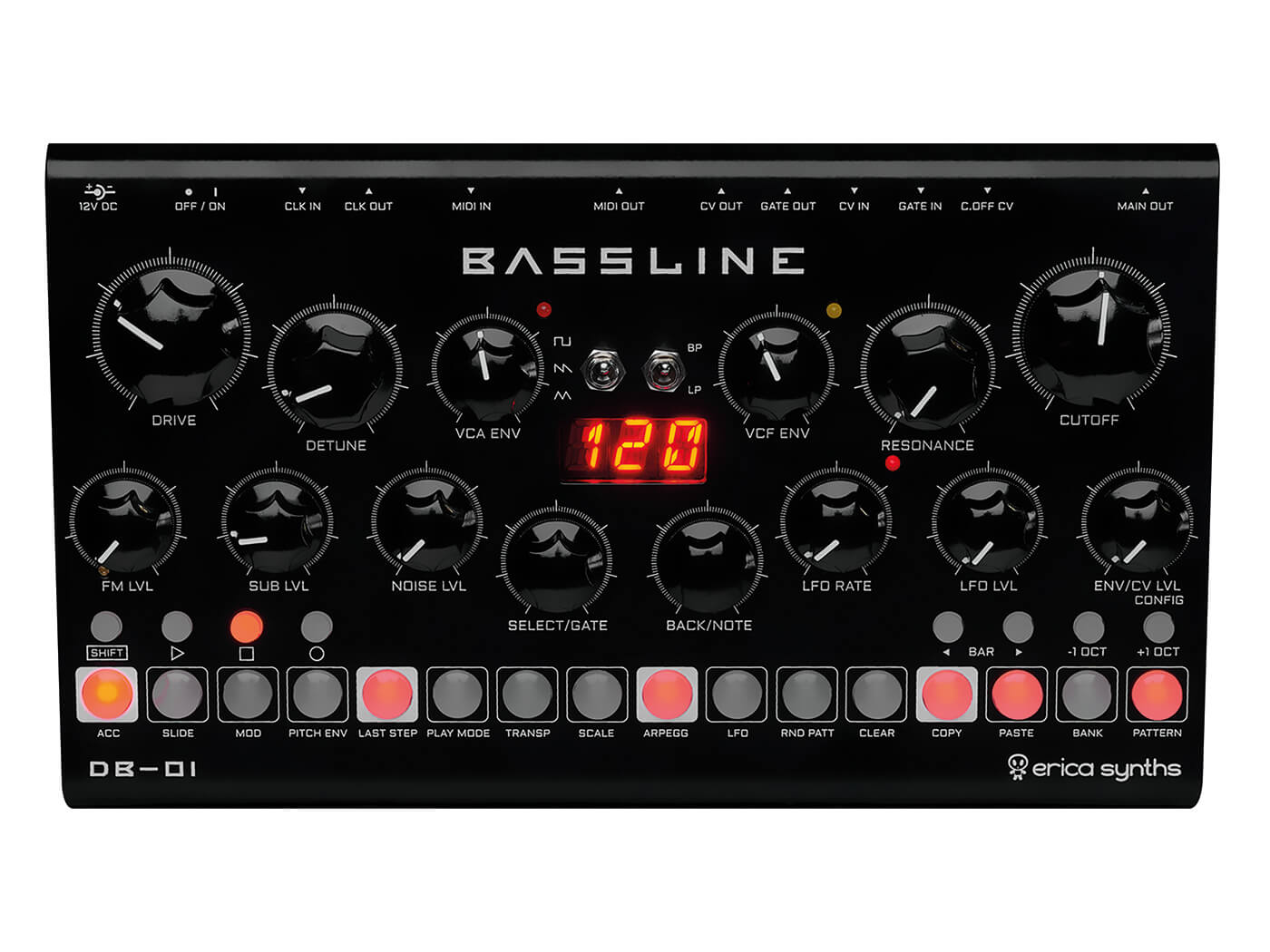 Riga-based Erica Synths’ enviable line of Eurorack modules encompasses everything from the petite Pico series, whose 3HP modules are designed to provide maximum potential but take up minimal space, to the all-analogue Fusion series, whose vacuum tubes are placed front and centre. Its recent output, however, has seen the Latvian pioneer peer beyond the Eurorack format and set its sights on the desktop.

The latest in its array of bedroom-friendly products is the Bassline DB-01, which packs Erica’s signature sound into a compact desktop synthesizer equipped with an analogue engine, a transistor-based sub-oscillator, a syncable LFO, a 64-step sequencer and more. To understand its place in the world, though, we must rewind the analogue clock a few decades and look, as ever, to Japan.

Back in the early-1980s, Japanese innovator Roland had its crosshairs fixed on Nippon’s burgeoning home karaoke market. Meanwhile, its TB-303 bassline synth, released in 1982, found itself far from the domestic rumble machine of choice, and was discontinued just two years later. Roland began selling its remaining stock cheaply and the secondhand market was awash with 303s. It was at this point that young bedroom producers the world over – namely Chicago group Phuture – got their hands on them. Not long later, acid house was born.

The rest is history. These days, secondhand 303s change hands for exorbitant sums. Roland has revisited this form since with its portable TB-03 and TB-3 models but has yet to truly return to its original analogue design. Expanding on and modernising the wonders of the 303, then, has been left largely up to other companies – which brings us back to the Baltics. Erica’s Bassline DB-01 brings the bulky analogue sounds of the 303 back to the desktop, but with a few enhancements that bridge the gap between old concepts and modern demands. 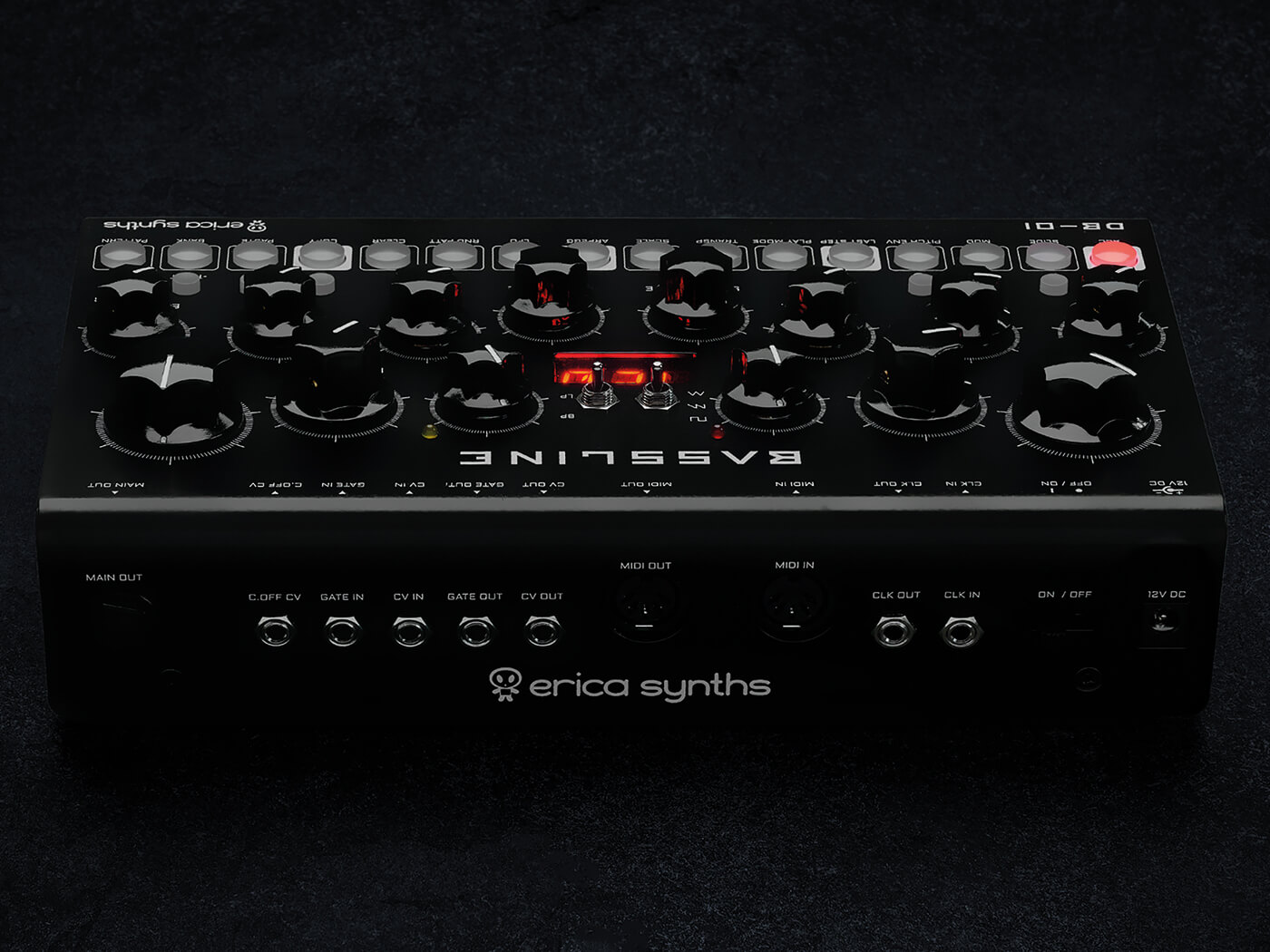 The characterful DB-01 boasts many of Erica’s tried-and-tested design features. At the front of its signal path sits a single VCO, switchable between saw, square and triangle waves, and the transistor-based sub-oscillator exists as a square wave and at a fixed pitch of one octave below the fundamental. While the VCO offers no amplitude control, the sub-oscillator sports its own pot, which allows the signal to be altered as required. Similarly, the noise pot allows users to introduce white noise into the signal, ideal for adding bright and biting colours up front.

In the absence of a second VCO, there’s a slightly confusing Detune pot, which provides a texture akin to a detuned VCO and a SuperWave. It’s effective – thanks to its reliance on two bucket-brigade device (BBD) analogue delay lines equipped with frequency shifting – even if it’s a little unexpected. Tweaking the Detune pot results in pulsing sounds, which are particularly potent when used alongside the adjacent overdrive. Deploying both together churns out wonderfully forced tones that suggest the VCO is wrangling with itself.

The additional frequency-modulation pot controls the pitch variation heading into the VCO and sub-oscillator and, once again, results in fantastically chaotic, gnarly and aggressive sounds, thanks to the speed and ease with which the LFO moves through the audio spectrum. Expect crisp top-end details and healthy low-end depths.

In keeping with many of Erica’s other Soviet-inspired devices, the Bassline DB-01’s VCF is based on the fabled Polivoks design. Armed with both cutoff and resonance, the 2-pole filter moves easily into self-oscillation, and is switchable between low-pass and band-pass modes. There’s no discernible low-end drop-out as the resonance is cranked, and the overdrive helps exaggerate the low frequencies quite nicely.

The DB-01 can be operated on a number of levels. During our initial explorations, we wire up a CV-based keyboard and simply play it as we would a monosynth. This can also be achieved through MIDI. Our only slight issue here is the lack of full envelope control. The DB-01 is equipped with a sustain/release-style envelope, meaning there’s no control of the attack phase. But with its two basic envelopes, you can at least control the amplitude and filter independently. The second decay-only envelope is directed to the filter, as it was in Roland’s original 303. 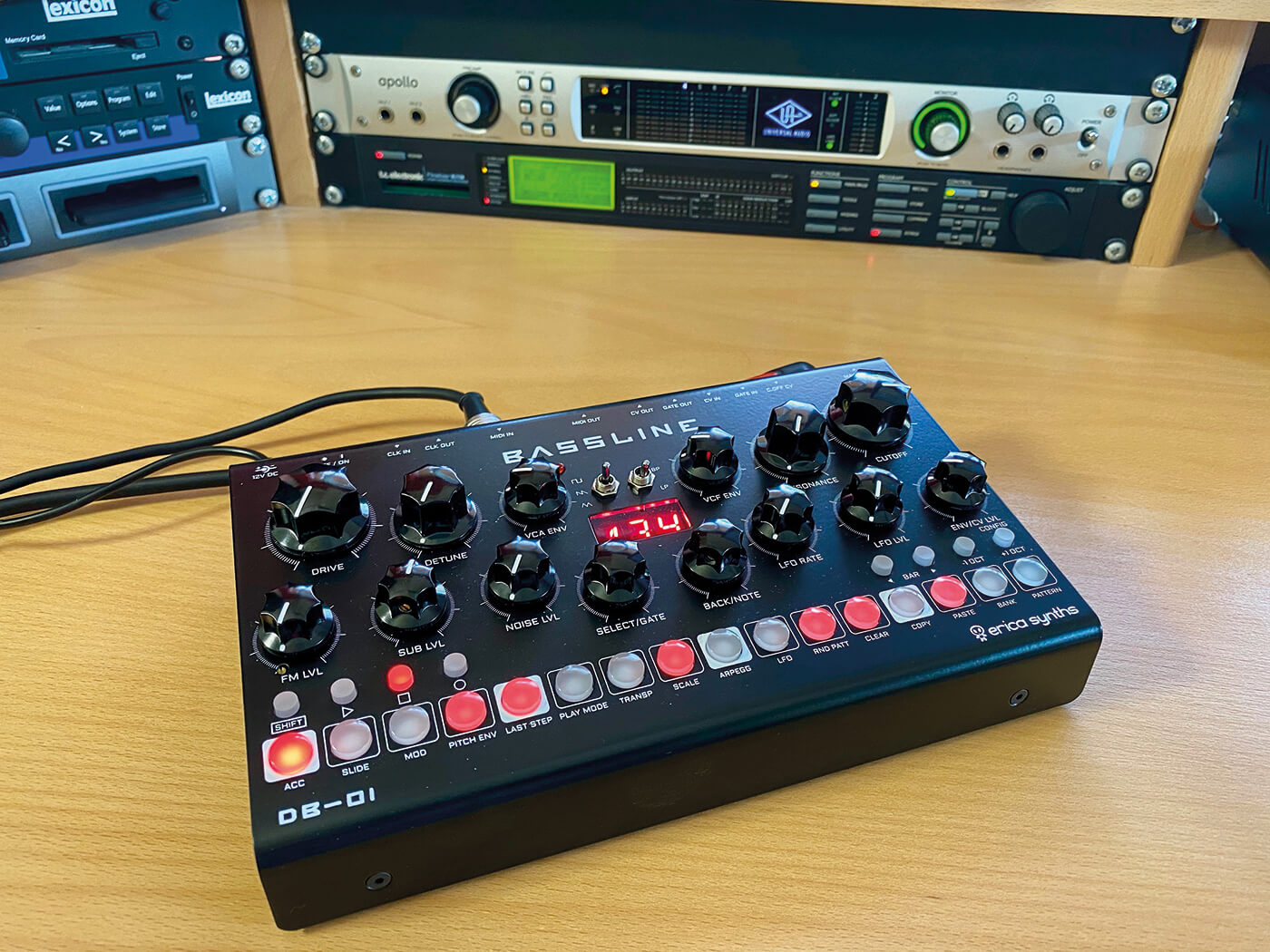 The sound-generation side of Erica’s DB-01 is only half the story. Part of the allure of the 303 was its sequential capabilities, which allowed for accents and glides that were otherwise difficult to apply – ironic, given that programming sequences with the 303 itself wasn’t easy.

We have no such issues here though. Getting stuck into the DB-01’s sequencer is a breeze. Erica’s well-considered printed manual will set you on your way but diving right into this sequencer without written guidance may well be more fun.

There are 16 illuminated step buttons set at the base of the DB-01. Writing a pattern requires nothing further than pressing and triggering a step. Pitch alteration is accessible by holding down the corresponding step and turning the Note pot, while the central LED display provides chromatic note descriptions. Selecting scale types is possible too.

Accessing additional elements is simple too, just hit and hold the shift button and press the accent, slide or modulation, for example, and the DB-01’s sequencer will enter the appropriate mode, allowing you to program its elements. You can even program the pitch envelope and filter cutoff at step-by-step level. There’s masses of pattern-based control available here. Thankfully, there are also 10 banks into which 16 of your patterns can be saved. Be aware that if you turn off the DB-01 without having saved your patterns, they will be wiped.

Don’t be surprised if the DB-01 is taken up as readily as the 303 was by Chicago’s bedroom producers. This may become something of a modern classic. It’s well built, with solid Moog-style pots and a squat aluminium chassis that could surely withstand a barrage of hits.

The illuminated step buttons glow a bold pink-red, and offer some enjoyable party tricks. When the LFO is altered, for instance, the lights sweep and dance to its rate. Some of the DB-01’s parameters use lights to guide you too, changing in brightness from dim to dazzling to lead you through sequences.

This is a modern synth with classic pedigree. Erica’s DB-01 is capable of everything from subtle tones and techno hits to squelching acid-house swells and the kind of fat flavours favoured by John Carpenter. It has the depth to keep die-hard fans of house happy, as well as the kind of analogue presence to interest modern producers looking for old-school sounds. In short, it’s everything you’d hope for in a 303-style synth. Let’s just hope its uptake is swifter than that of its forebear. 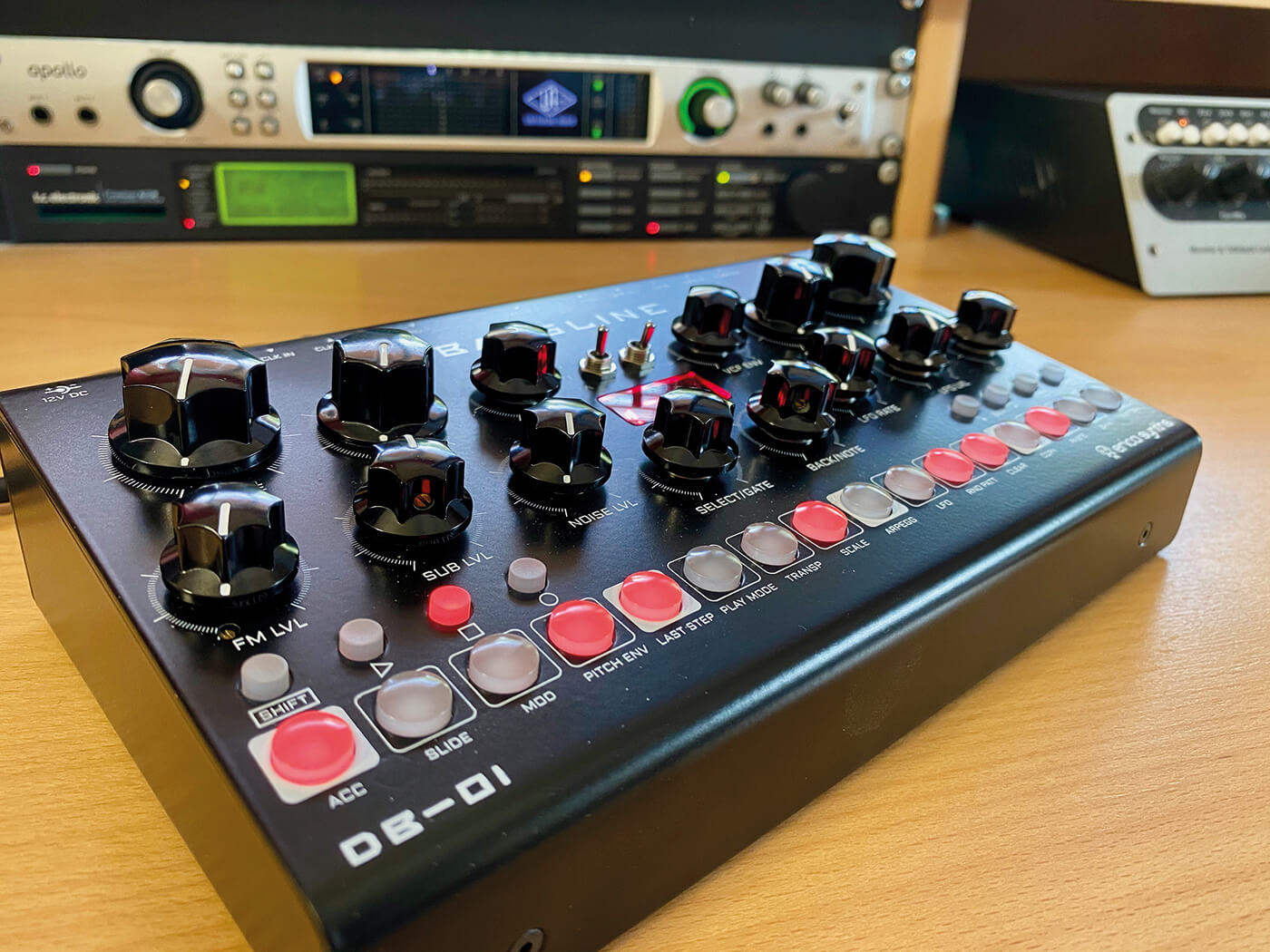 On one hand, Erica Synths’ Bassline DB-01 is a classic 303-style sequencer, complete with all the contemporary gating and modulation options you’d expect from any updated product that claims to iterate upon an iconic design. Aside from its ability to function in a conventional pattern-based manner, though, it has many traits that make 1980s synths look crude by comparison. With the DB-01, for example, you can chuck arpeggios into the middle of a pattern, as the step buttons enter a mode that sees them mimic a piano keyboard.

Connection via MIDI or CV/Gate also allows the DB-01 to be used admirably as a monosynth. It’s let down slightly here by its basic envelope control but it’s still able to hold down basses over MIDI with ease and aplomb. Erica’s new unit can sound warm and pleasant. With a move into FM and overdrive territories, however, its gnarled fat tones make unprocessed 303s sound tame. It’s also open to syncing via MIDI or analogue clock. Employing the +1 volt-per-octave protocol, it’s likely to play nicely with Eurorack and vintage keyboards too. 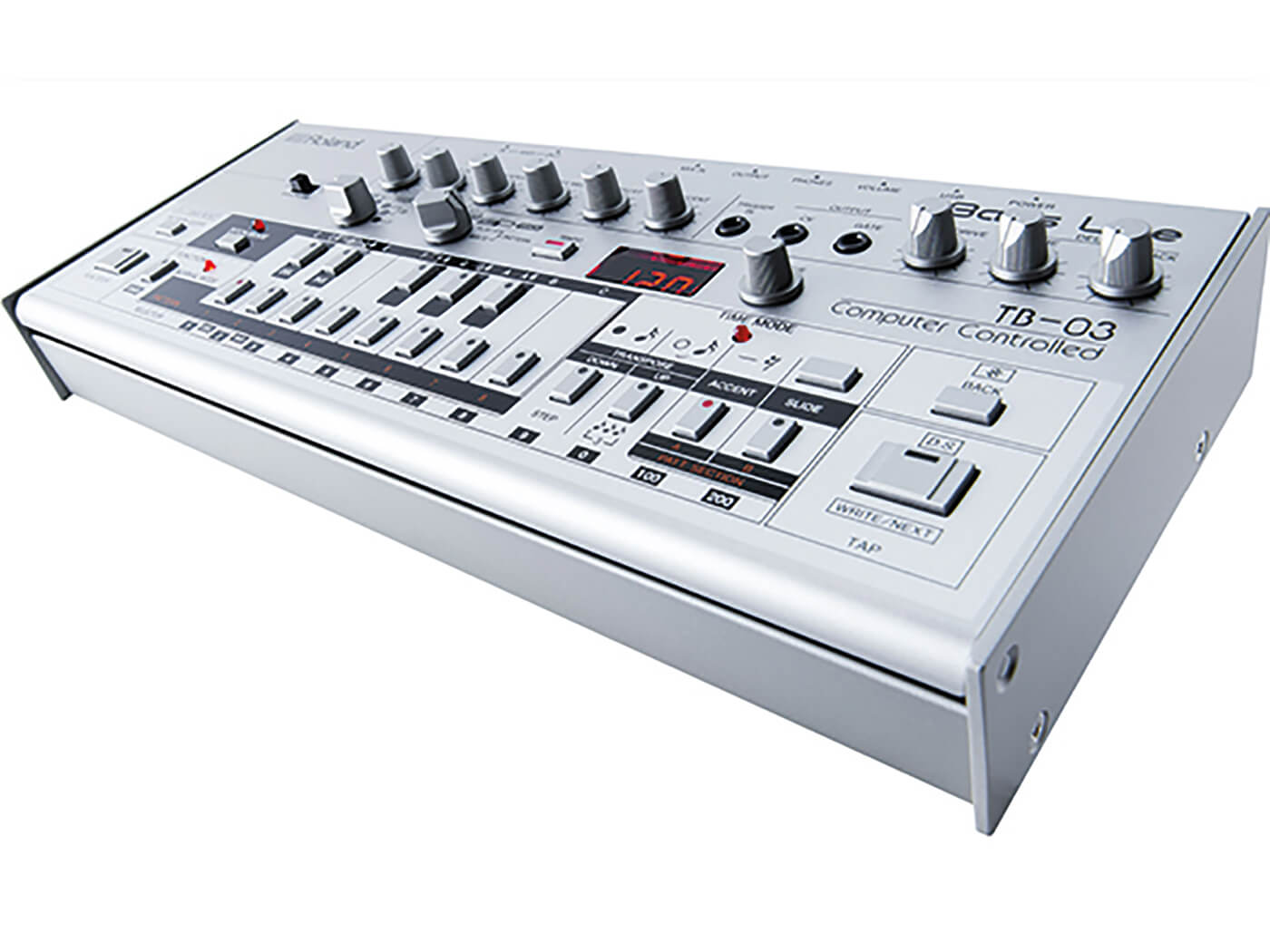 Roland’s digital reincarnation of the TB-303 uses analog-circuit behaviour modelling to achieve an unbelievably accurate facsimile of the original. It also boasts additional functionality, such as a backend overdrive and USB connectivity. 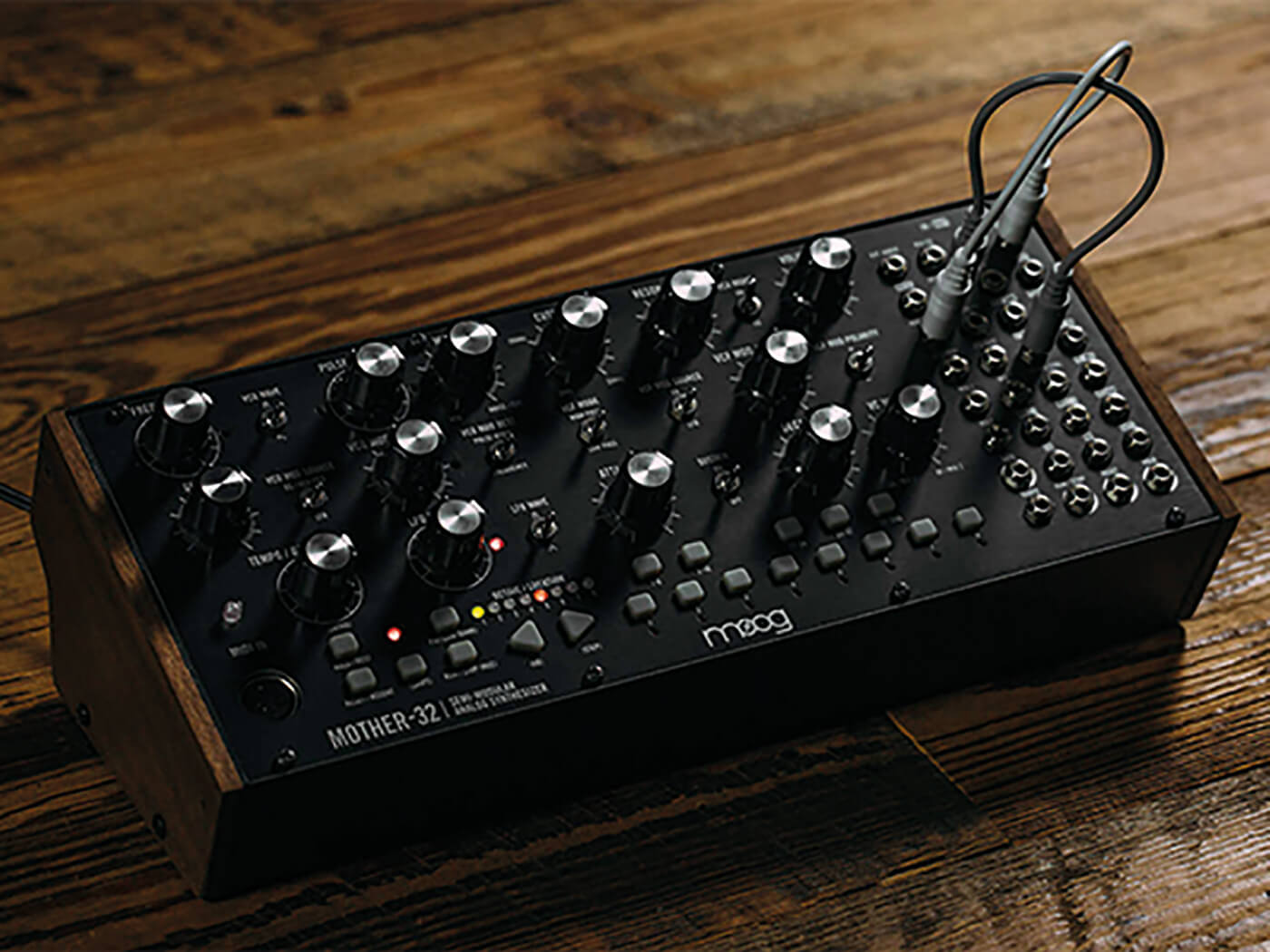 The Mother 32 isn’t a 303 clone but it’s a worthy contender at a similar price point. With Eurorack and patch-based leanings, the smallest in the Mother series offers a classic Moog ladder filter with an onboard sequencer in an endearing and creative package.