BOSS has released an updated version of its Slicer pedal in its smaller compact series. The pedal has had a significant upgrade but how useful is it for the studio musician? 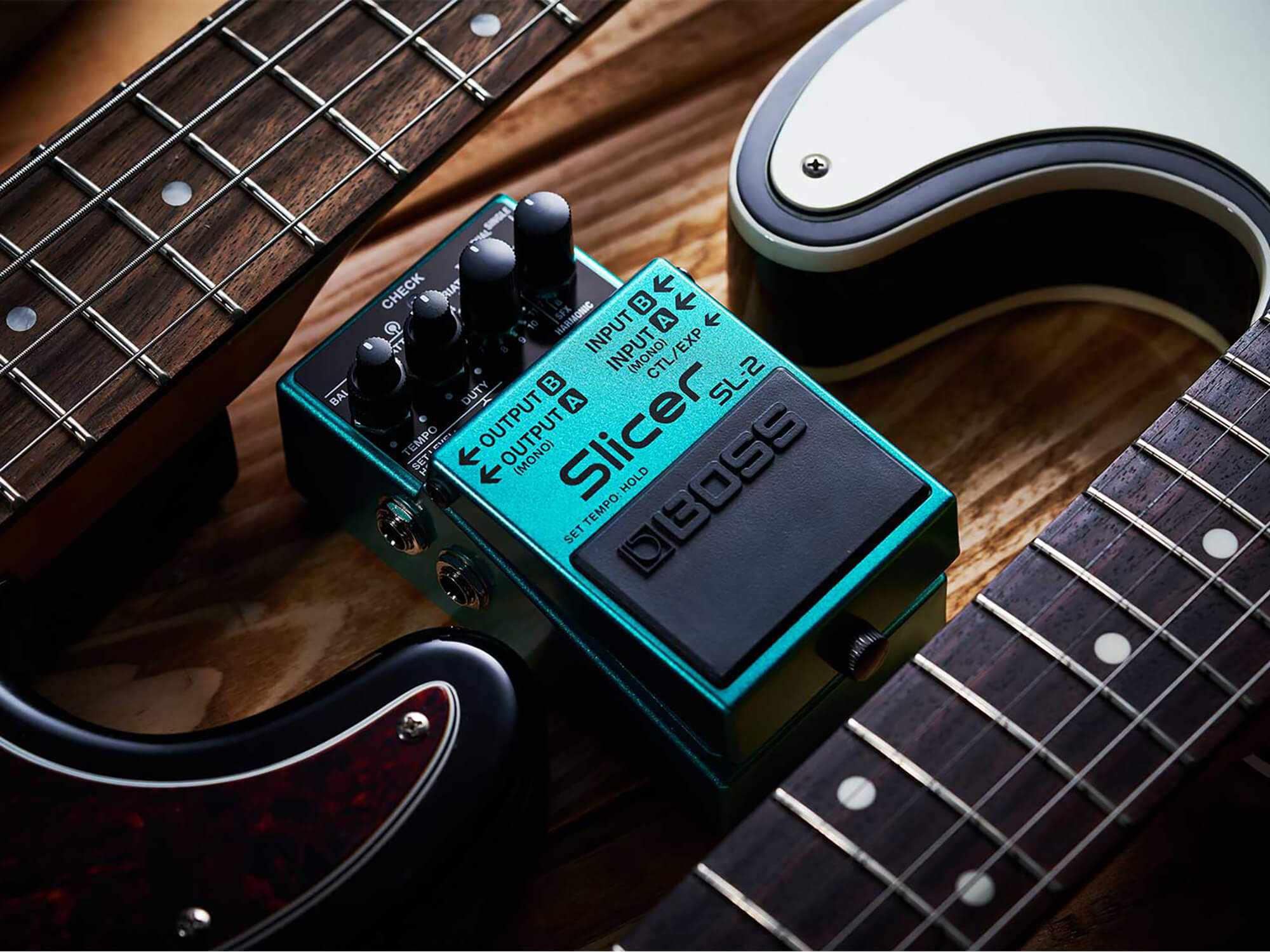 BOSS’ compact series of pedals is possibly the most iconic of all pedal designs – and the brand is still continuing to add models to the line-up. The same can’t be said for its Twin Pedals, which seem to have been quietly replaced with the smaller 200 Series design and placing the same effects into compact pedals. This is what we have before us with the SL-20 Slicer. The original BOSS SL-20 Slicer was released in 2008 as a Twin pedal and has now been replaced by the SL-2 in the coveted compact format.

Upon looking at the smaller version of the Slicer pedal, we’re instantly struck by just how much has been crammed into a relatively small enclosure. The pedal has six knobs, five jack sockets, a 9v PSU socket, a TRS mini-jack MIDI socket and a USB socket. This pedal feels very crowded and a little intimidating. 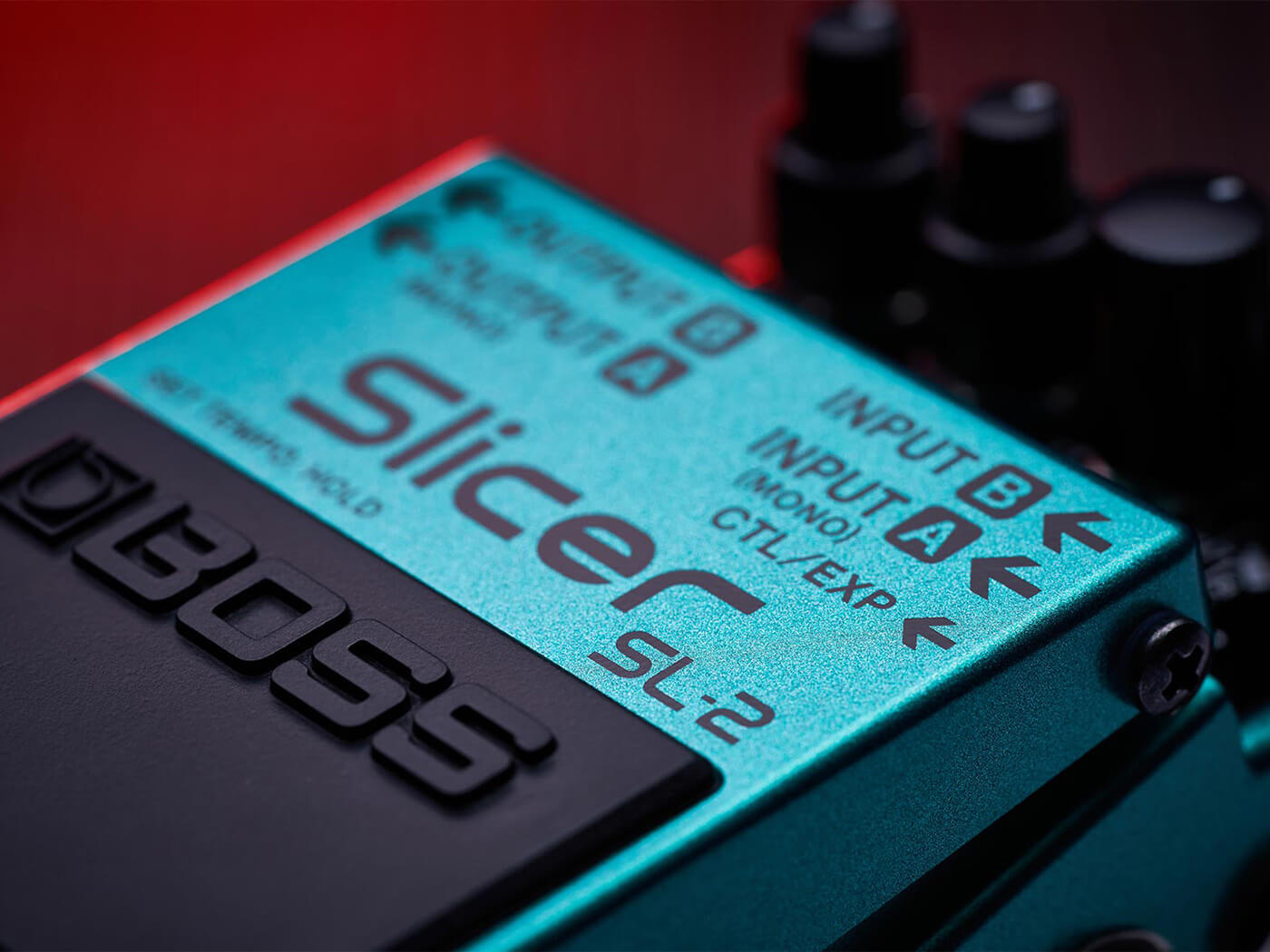 We begin by running a synthesizer through the Slicer via our DAW. Pad sounds can often be quite static, so the ability to add some movement and chop the sound up a bit could be a potentially useful tool as an additional form of modulation. The first few banks of settings are rhythmic patterns with very little manipulation of the sounds – some have effects applied to them, but most are patterns that open and close a gate in a variety of rhythms. The most effective method for finding a desirable pattern seems to be trial and error and auditioning patterns – but we do find some inspiring patterns here that really encourage us to make some music with the pedal. 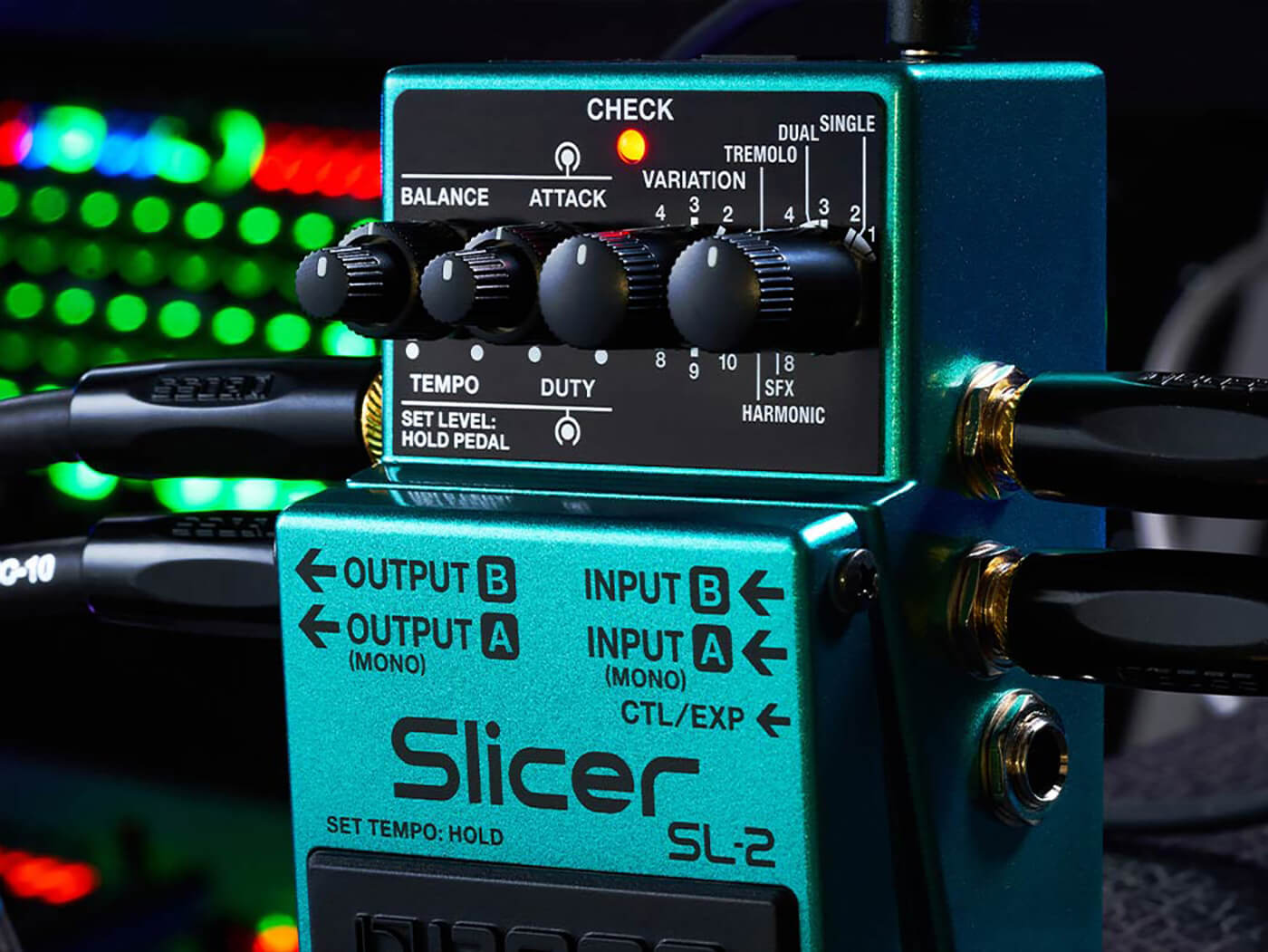 The Slicer can double as a tremolo effect and has a range of simple volume modulation effects in the memory slots. These can be adjusted to taste via two of the concentric knobs on the pedal – Attack and Duty. The Duty is the period within one wave cycle between the peak and trough – but in music tech circles, this is more commonly known as pulse width, so this labelling could be quite confusing to a lot of users. By adjusting the Attack and pulse width (Duty) we can get a wide variety of tremolo patterns that will cater to most needs. 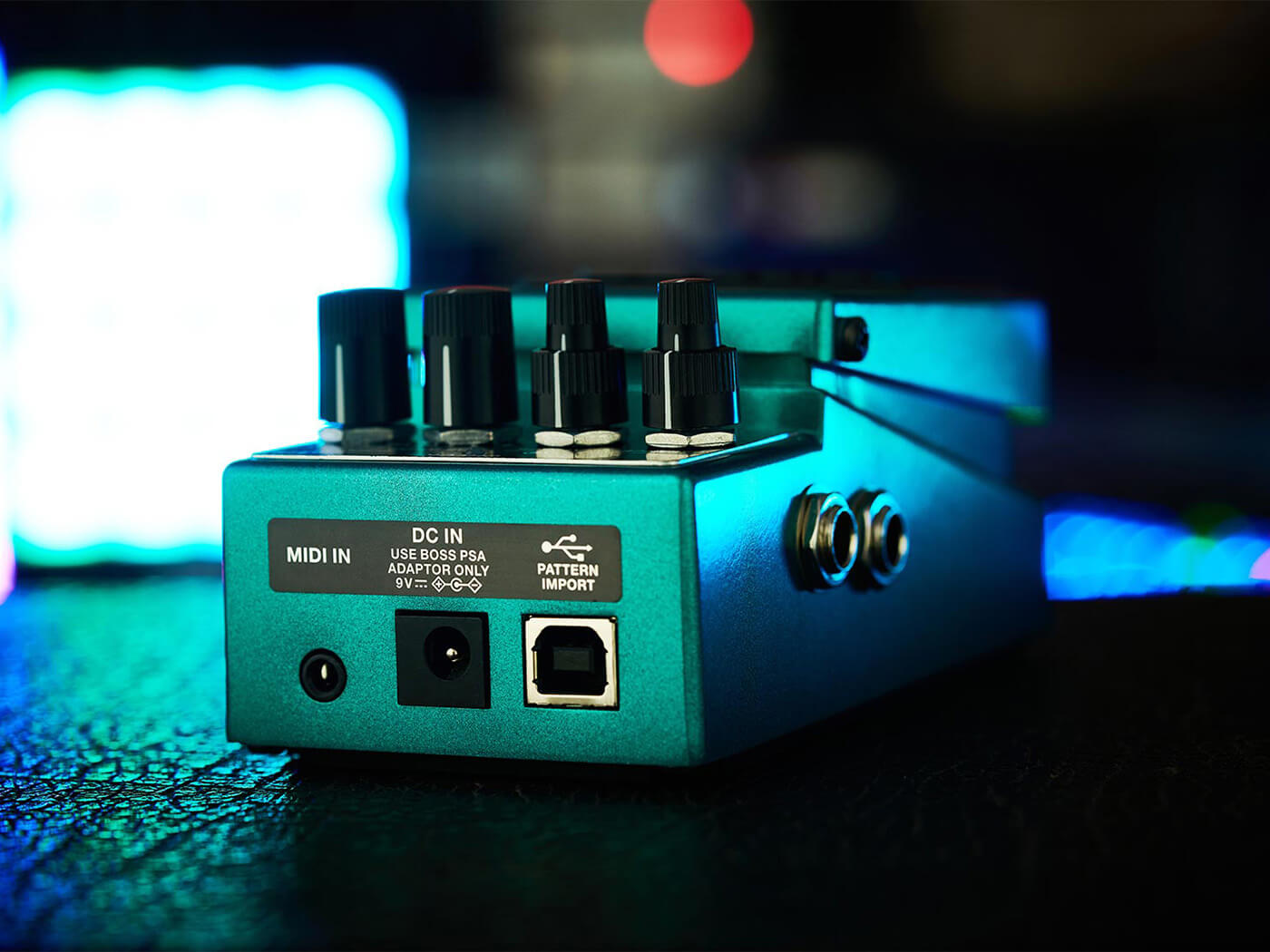 So far, we have been running the pedal in free running/tap tempo mode and synchronising the pattern to the tempo of a track by ear. But it doesn’t take long for the pattern to slip away from the metronome, so we hook the pedal up to a MIDI clock. The Slicer has a mini-jack TRS socket input for MIDI (as do other BOSS pedals) that requires conversion from a 5-pin DIN plug, which itself requires conversion from USB on our system. Once connected, it works perfectly and the slices stay precisely in sync – but given that the pedal already has a USB socket on it for uploading patterns, it would make more sense if it could receive MIDI clock this way too. 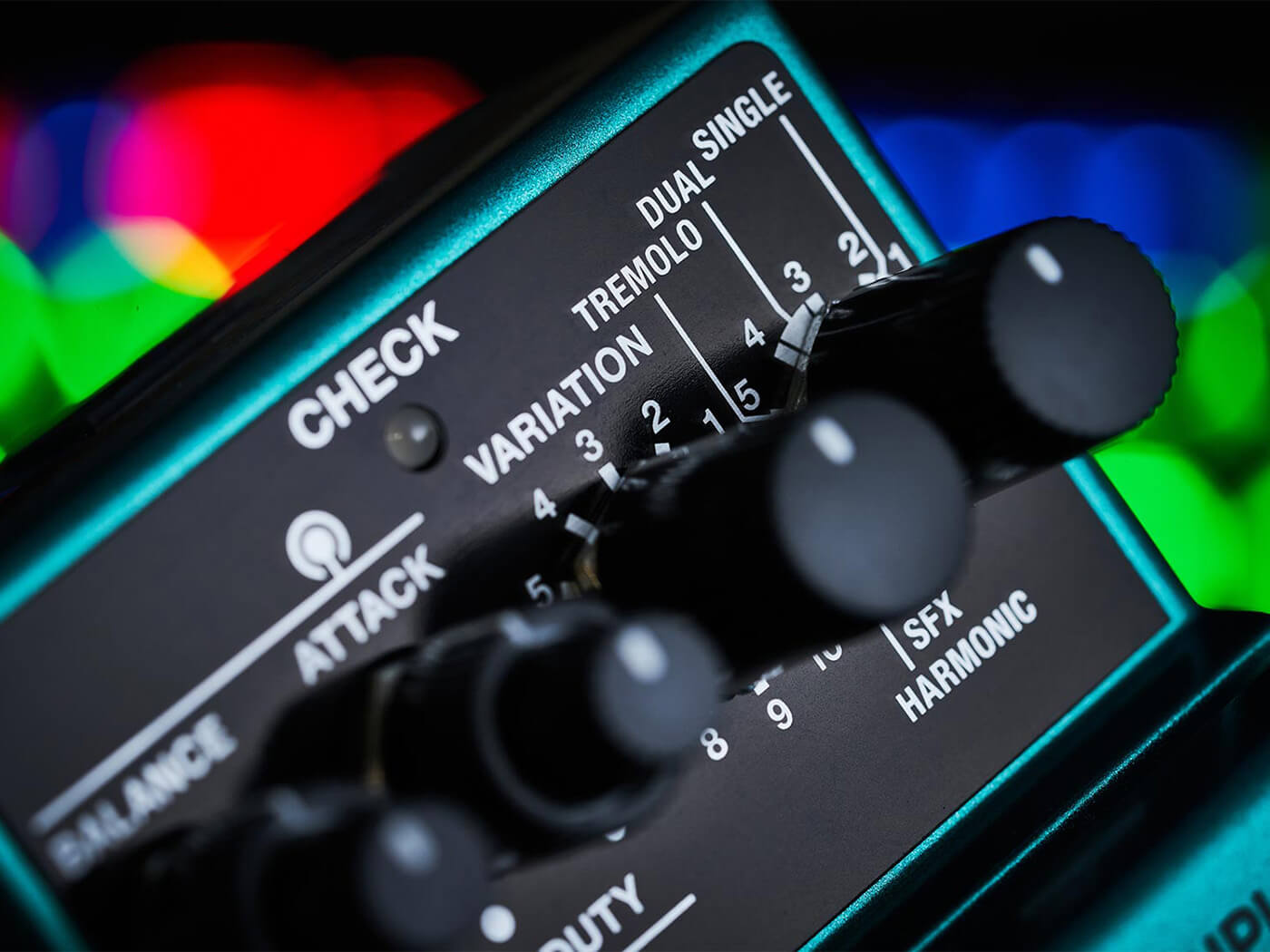 The Slicer is an effective modulation/rhythm tool for chopping up incoming audio. If you want to create this effect live, then it will be an invaluable tool. But when working with software, a DAW can achieve similar effects with the built-in plugins. When applied to a vocal to vary a specific word within a line it created an almost sampled, stutter effect that would otherwise require several additional DAW steps, but otherwise, this pedal will work best in the live context.