This UK synth manufacturer is unwavering in its analogue components and ethos, but will a few modern feature additions make this a contemporary classic? 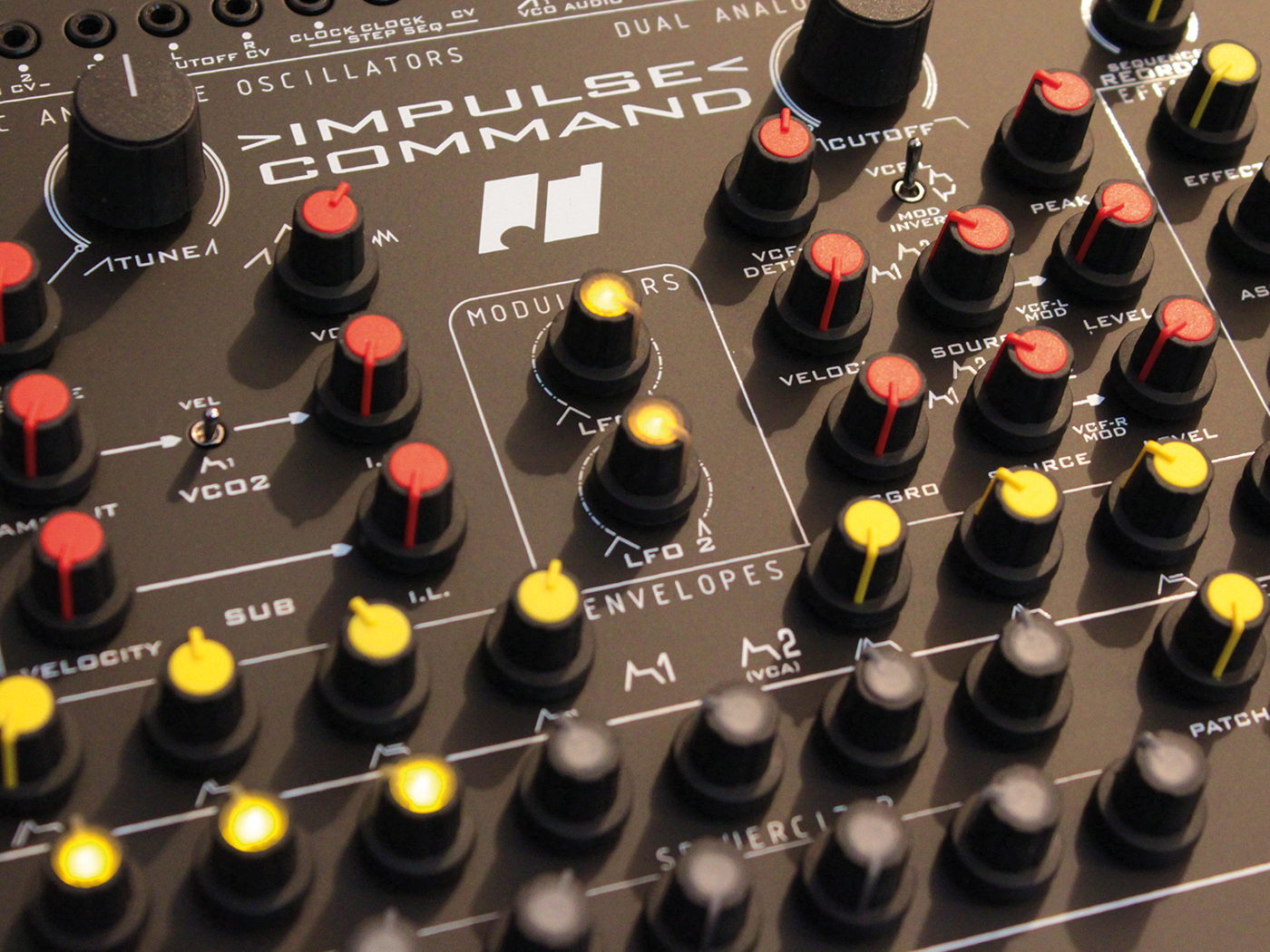 Founded by synth expert Tom Carpenter, Analogue Solutions has made boutique synths for over 20 years, being one of the first names in the now overflowing Eurorack modular market. The company’s latest creation continues with an uncompromising view of total analogue synthesis, where voltage is king and emphasis is firmly put on the organic nature of the electronics.

With the Impulse Command, you get pure, vintage-style analogue-synth design through and through, with no digital LFOs, envelopes or digitally controlled oscillators. However, there is MIDI, a sequencer and a tasty digital effects processor at the end of the signal path – which we’ll get to later.

The build quality is a solid metal design with all the knobs and rotaries feeling nice, but I would have liked a more solid power switch and integrated power supply, rather than the 24-volt block adaptor. Once plugged in, because you’re dealing with pure analogue, the Impulse Command needs a moment to warm up and you might want to give it a tuning check. There are two analogue VCOs and a square-wave sub-oscillator. VCO1 has switchable saw, triangle, square pulse and noise waves. The large tune knob is the master tune for all oscillators, with VCO1 and VCO2 having their own detune function.

Straight away, with a twist of the sequencer switch, you can get LFO2 driving the sequencer tempo and firing the analogue step sequencer, which is designed primarily as a modulation device, or hit the RUN button to input your 16 MIDI notes which it will play in sequence. Turn the sequencer switch again and you can trigger the sequencer via MIDI notes. MIDI note 000 (usually note C3) and MIDI clock both receive on this setting and are used to sync the sequencer in different ways, either via standard clock sync that is on or off, or by advancing the sequencer one step every time a MIDI 000 note is received. The latter method means you can advance the sequencer is any way you like – triplets, half-time, double-time… one-step-per-bar if you’re making drones, maybe? The flexibility of sync here is great. 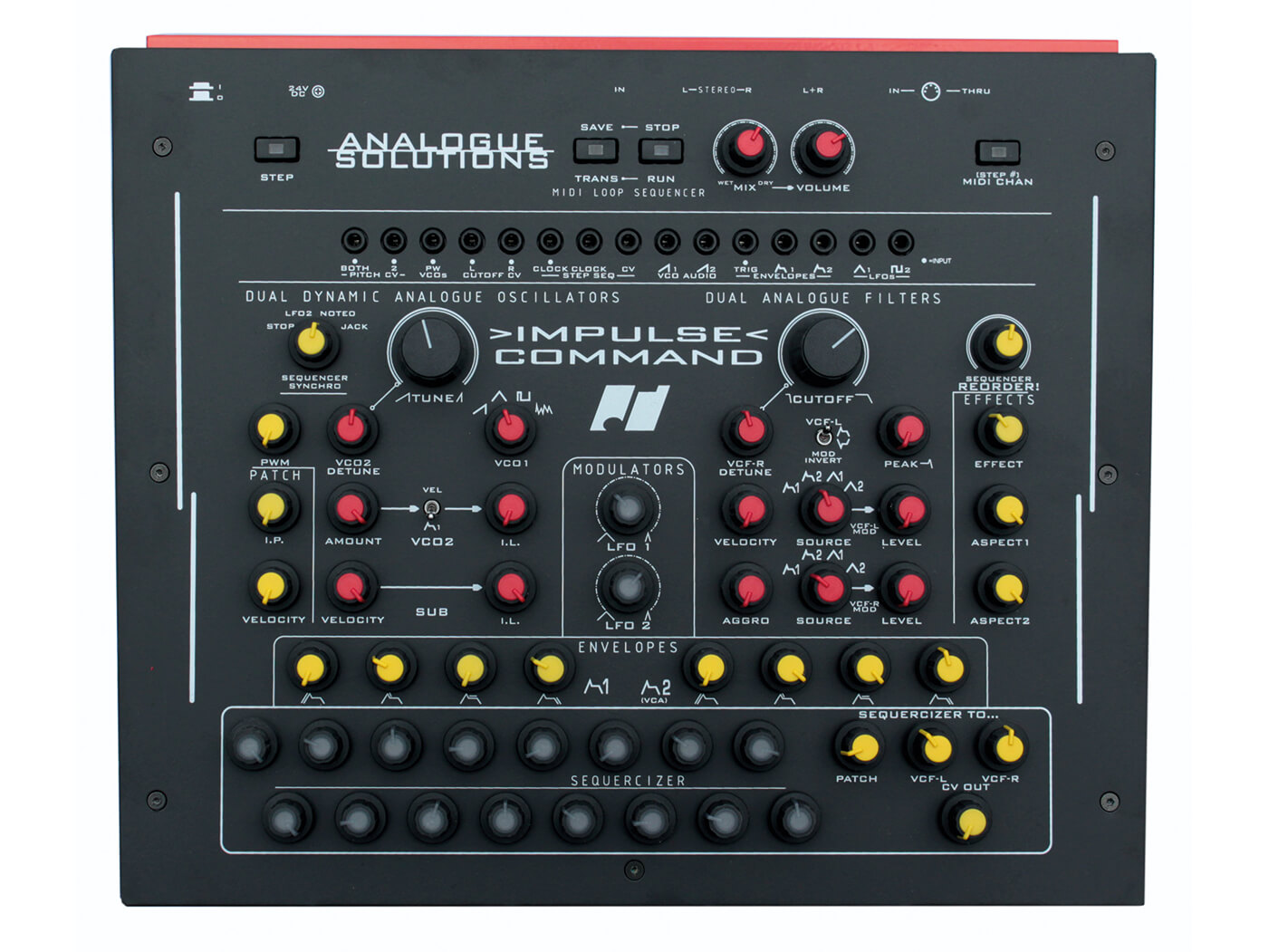 Navigating your way around the interface is super intuitive, with only a few unique labels such as I.L. (Initial Level) and AGGRO (which adds cross modulation from VCO2 to the filter cutoff) perhaps prompting non-experts to reach for the manual. But at this price point and with this unique design, we expect it’s probably not a synth aimed at first-timers.

So, how does it sound? Well, it’s fantastic. It’s rich and warm when you want it to be, spiky and metallic if needed and when you throw in the layers of modulators, effects and sequencing options, it quickly forms the centre of your sound. On its own, without exploring any of the semi-modular-style patching, it forms entire soundtracks, spitting out glorious harmonic oddities right across the stereo image. Equally, though, it can be tamed into a rich and thick lead or bass synth.

The effects section will not suit all tastes; not because it doesn’t sound great, but because it’s slightly awkward to use – there’s no indication of what effects are selected or the parameters you’re tweaking. Buried between three simple dials are eight effects including delay, reverb, flanger and bitcrush. Aspect 1 and 2 control things like time, feedback, bitrate, decay and so on, but you won’t know that without looking at the manual. Three of the eight effects also have sequencer input-level control, so you can dynamically add the effects per step on the sequencer. There’s a master wet/dry control for the effects by the overall synth volume knob, too.

I find this slightly secret effects section fantastic for patch design. It allows for extra creativity for sound sculpting and some very happy accidents. But to use the awesome sequencer-powered parameters of certain effects, you’ll need to make sure you’re selecting one of the last three furthest clockwise of the delay, bitcrush or reverb effects.

For anyone looking to integrate this into their setup, it syncs perfectly, clocking CV out to our Korg Volcas via a simple 3.5mm jack and the MIDI In and Thru are tightly synced when connected to a DAW or Arturia BeatStep Pro. It can easily form the monophonic centre of any DAW-less live electronic rig, too. Yet performance is where the Impulse Command really comes to life: it manages to create inspirational sounds and sequences with ease and manipulating the onboard effects gives the synth an extra edge and just like its promise, manages to sound like multiple synths all at once. Although it works fine as a sound source via a MIDI keyboard, the lack of pitch and mod controls via MIDI makes it crystal clear that it’s a synth designed for sequencing and not for keyboard players. 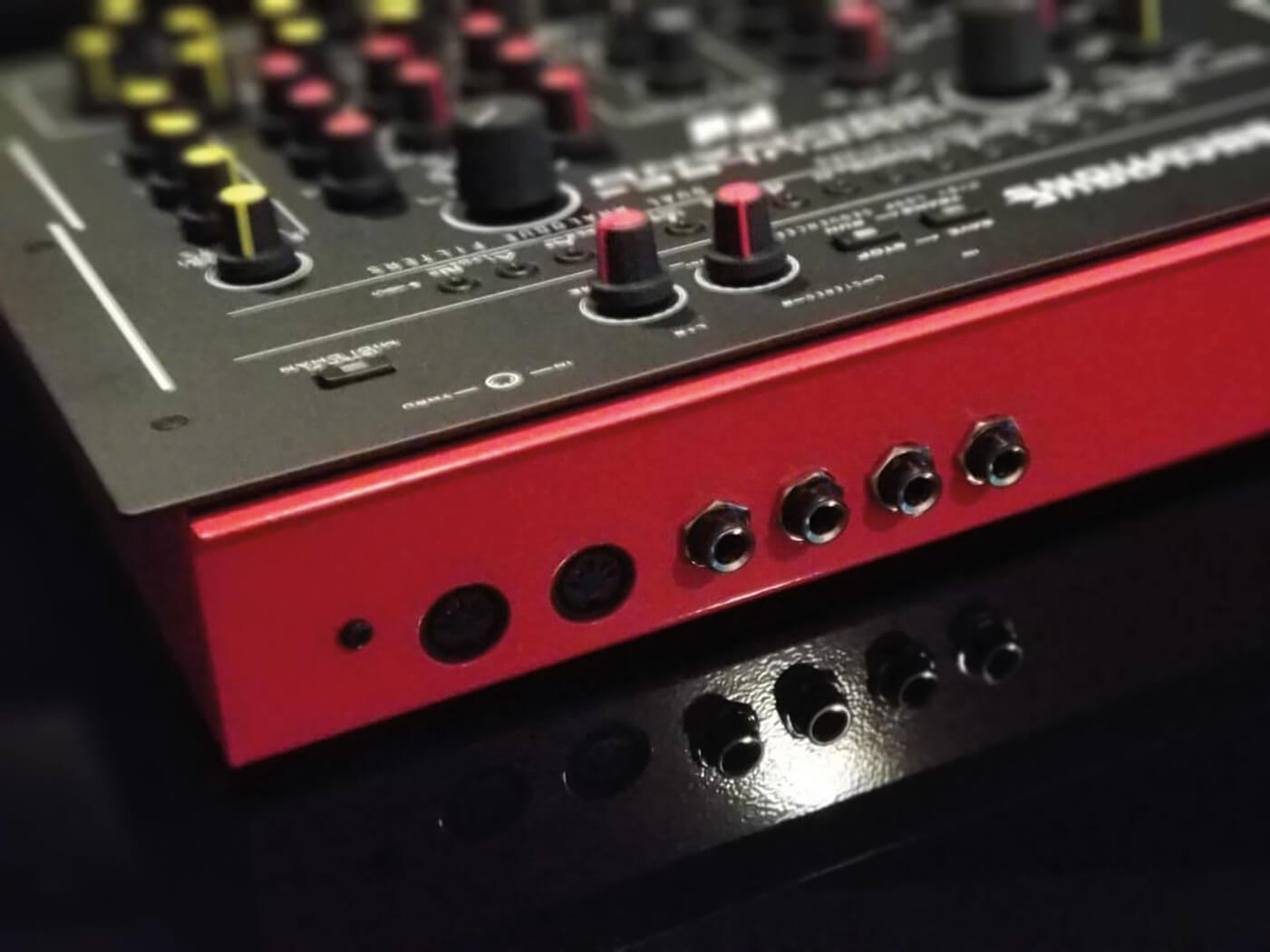 The issue we’re really grappling with here is the price. The rise in popularity in owning hardware synths means that an artisan-made piece of kit such as this is priced well above the mass-produced units from Behringer, Arturia, Korg and many others. This is always going to be an impossible challenge for a small, boutique synth manufacturer such as Analogue Solutions. Plus, this is a synthesizer like no other, and should inspire you and your music-making for years to come.

Having the flexibility to use the Impulse Command as a brilliant standalone unit, a performance module and sound processor is fantastic. Plus, as your studio or synth rig grows, you have the ability to patch it with other hardware, via its slew of modular patch options. This makes the Impulse Command very unique and very tempting. 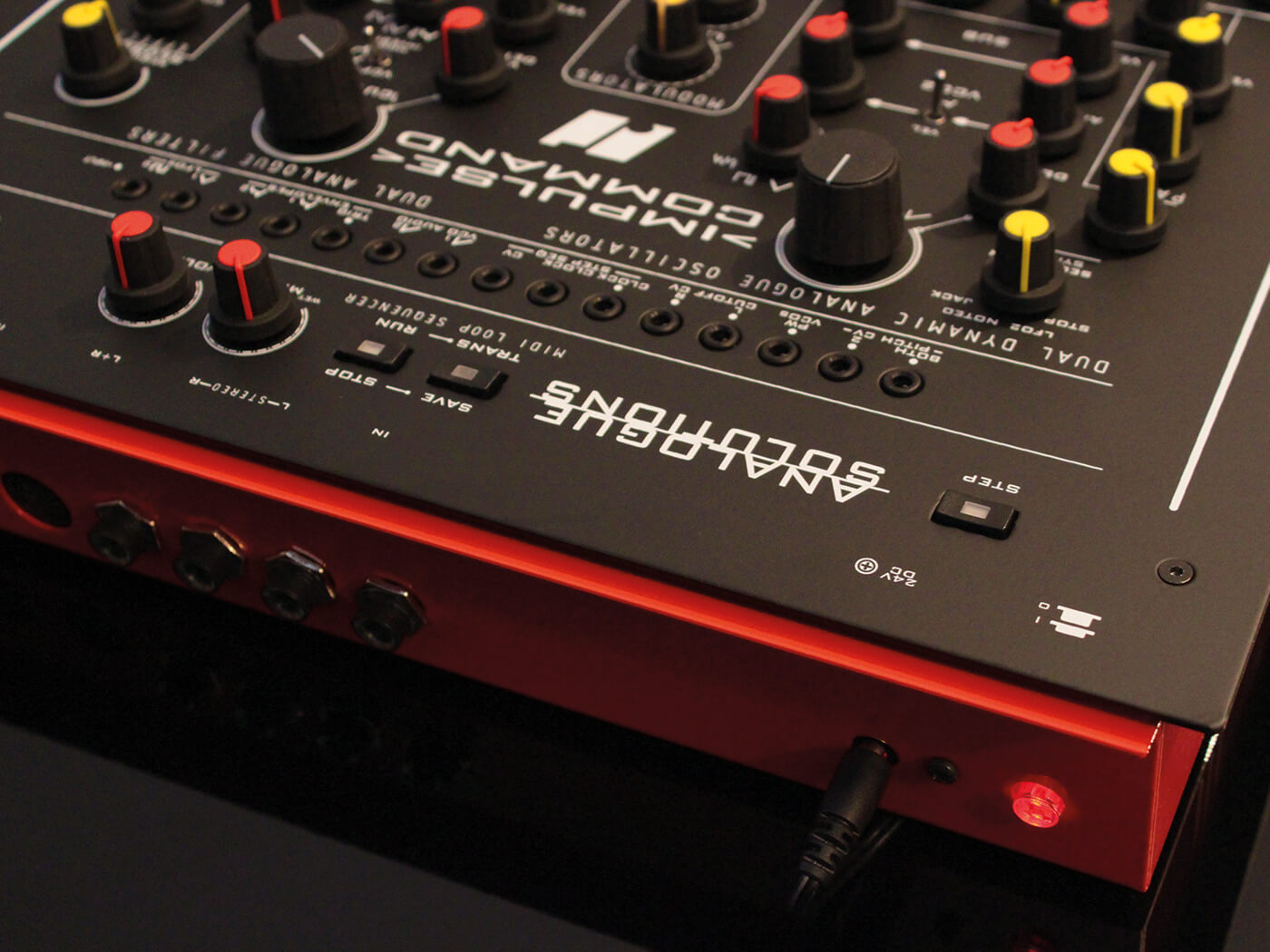 The question that most will be asking will be: is this worth buying in light of some heavy hardware competition? That’s a difficult question to answer. What we can say is that for people looking for their first hardware synth, it could be a little intimidating, but there is truly nothing quite like it.

For those tired of recent ‘analogue’ synths all being clones of old ideas, this is truly a refreshing design and operates with the air of chaotic fun and possibility of modular – without the lure of repeatedly spending on Eurorack additions. Analogue Solutions has delivered a synth that can both sound brilliantly retro and uniquely modern at the same time. If you can afford it, you won’t regret it. 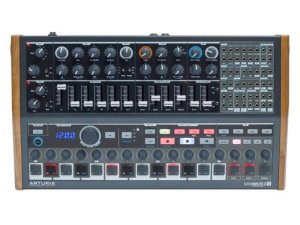 Though lacking the pure, through-and-through analogue signal path of the Impulse Command, the MiniBrutes come with some digital conveniences, such as USB, a lower price point and a similar interaction with the patchbay and sequencer on the 2S version.

At a similar price point and combining a synth and creative sequencer in a single unit, this innovative combination of analogue and digital is a collaboration of Greek synth heads Dreadbox and Polish innovators Polyend and comes close in terms of price and unique features but offers a different sort of synth engine.