Start your engines. We’re taking ALM’s turbo-charged and tone-injected Coupe for a few laps around a busy circuit. How well will it perform? 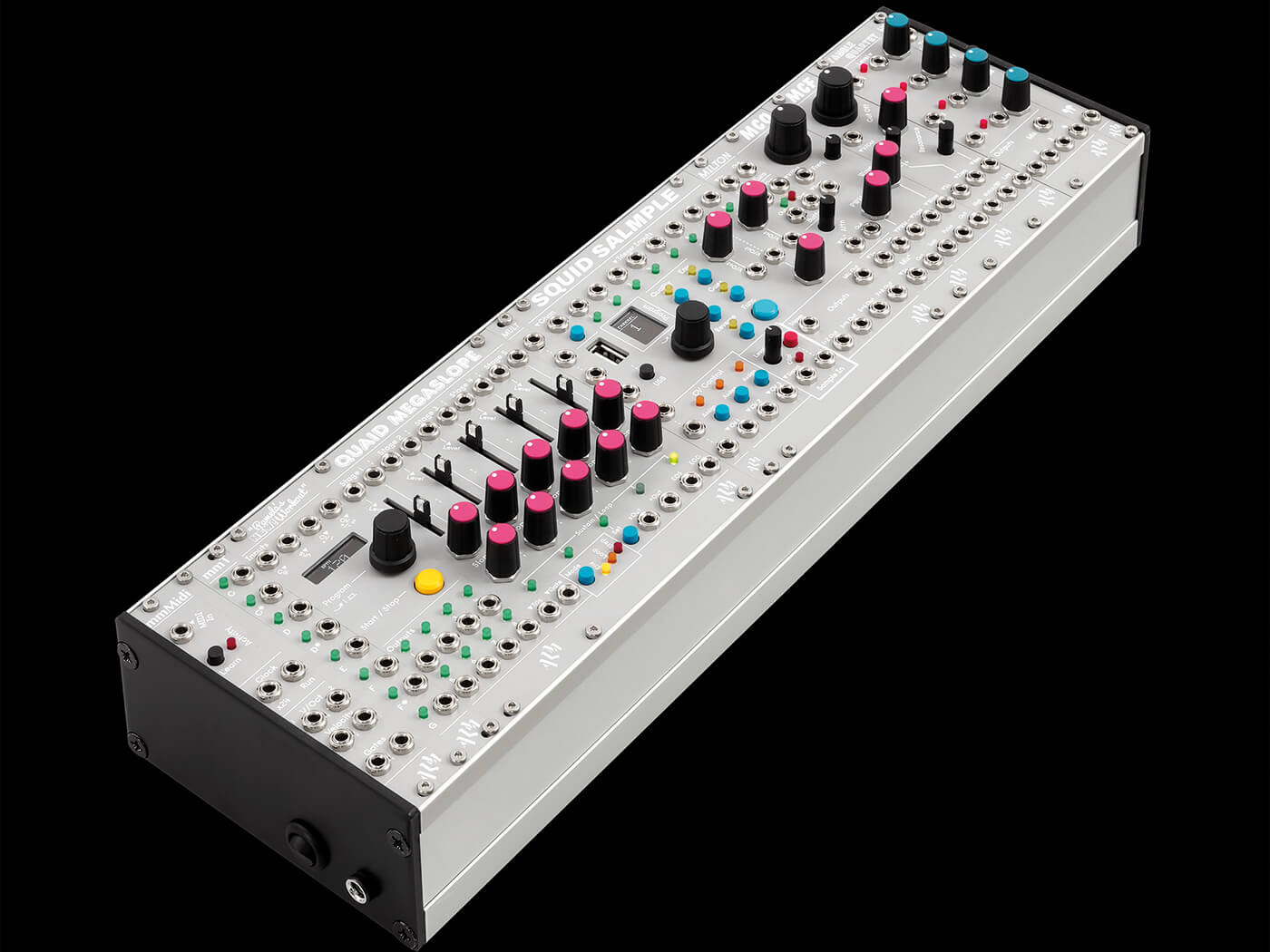 ALM Busy Circuits is a British success story. The boutique Eurorack company has won over fans around the world thanks to modules that combine inspired engineering with utilitarian functionality. You’ll find all that in this new complete modular system, which packs a few of ALM’s greatest hits, plus some exciting hits-in-the-making.

This is an all-metal 84HP (horizontal pitch), 10-module skiff-style Eurorack case. It’s solidly constructed, with built-in power. The sturdy unit is supported by six rubber feet, and is designed to sit on a desk, with no tilting or angling options.

There’s a certain logic to the System Coupe’s module layout. The triggering modules are on the left, the tone generation in the centre, and the output to the right. These aren’t always clearly defined in modular so the simple elegance and easygoing functionality of this unit makes it inviting for those diving into Eurorack for the first time.

On the far left is the mmMidi module, complete with expander. For anyone who wants to drive the Coupe like a conventional synth or use it for external sequencing and triggering, this module will prove hugely useful. Though it only offers MIDI input, the mmMidi module responds to incoming MIDI channel data, and diverts two channels to CV/gate and velocity control, while a third offers eight triggers that exit individually via the expander, making it ideal for drums. The module also responds to MIDI clock, converting the clock signal to a more usable Eurorack clock pulse for syncing other elements of the system – and no module lends itself more to synchronisation than ALM’s prized Pamela’s New Workout. 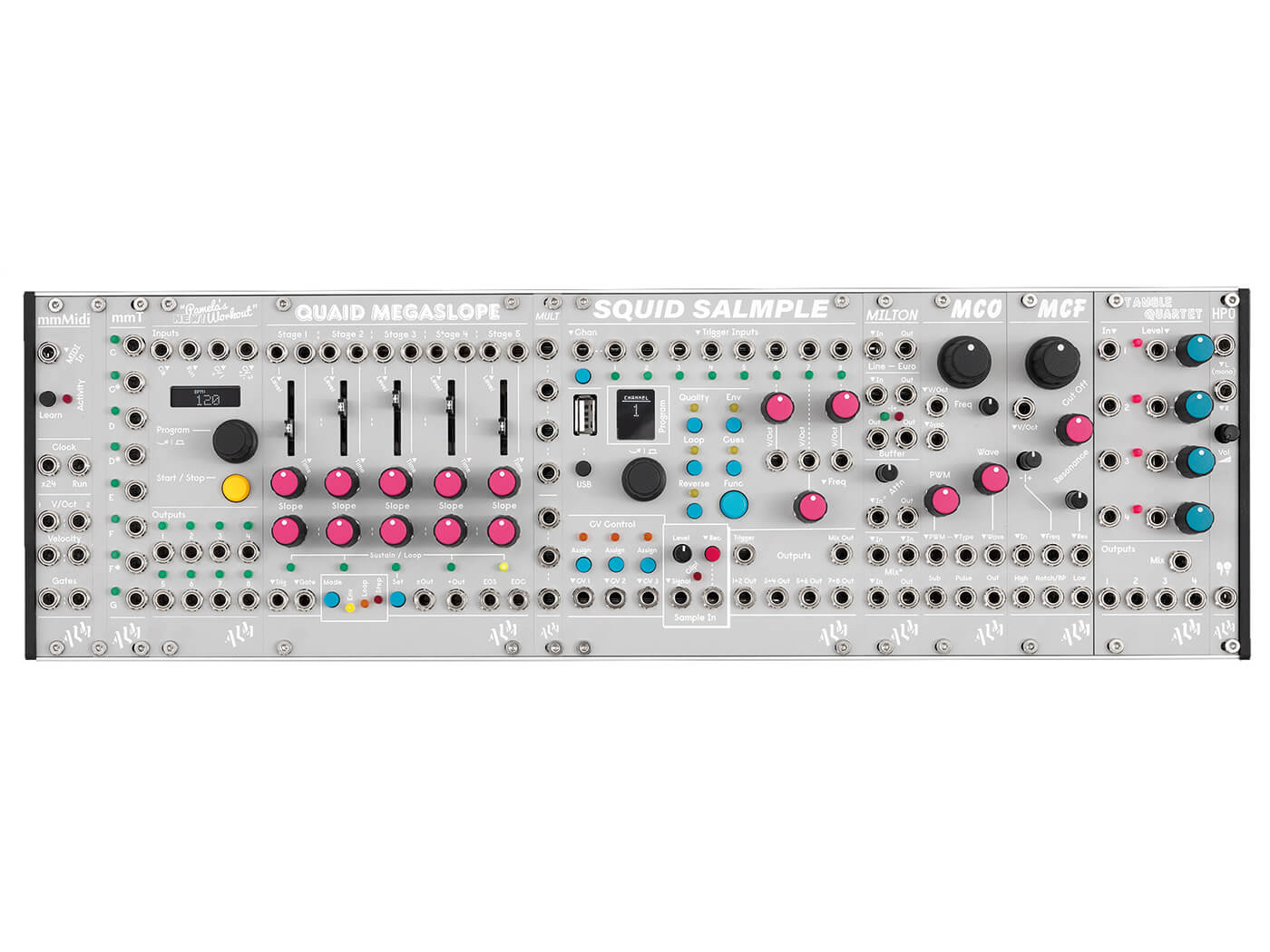 The next module on, it’s terrific to see this compact programmable clocked modulation source presented in this format, not least because it’s a popular module that seems to be present in rigs around the world. The success of Pamela’s New Workout comes down to its chameleon-like abilities – it provides pulse and rhythm, and is a huge modulation resource. Armed with its own internal clock and start/stop button, it’s easy to get going with Pam. It has eight user-defined channels that offer triggers, gates, LFOs, envelopes and even CV sequences.

Pam features a display to help guide you, though it might take some time for you to become fluent in navigation. Our initial play with Pam sees us using the first three of its eight outputs to create a basic drum pattern. Throw in a rudimentary drone and you can generate compelling parts with ease.

While the new version of Pam has been around for a few years now, the next module, Quaid Megaslope, is relatively new. With all of its features easy to access, Quaid offers five stages, each of which may form a phase for an envelope, LFO or step sequence. While it might be considered basic if used for sequential duties, it can be set to trigger from an external gate, so said sequence doesn’t have to conform to regular repeated rhythmic patterns.

Unlike some other modules that offer similar functionalities, Quaid’s three modes are selected via a dedicated mode switch, with a clearly labelled LED signifying which one is enabled. The faders illuminate too, to confirm which phase is currently in play, while both the timing and level elements are available to control via CV.

True across its range and specifically the Coupe, ALM has always been generous with patch points for modulation. Both the Pam and Quaid modules provide multiple outputs and plenty of generative modulation sources, making them ideal for whipping
up sustained musical parts.

The Pam and Quaid modules are exemplary examples of their ilk but those who like to have a conventional ADSR-style envelope to hand may be disappointed – there isn’t one here. Quaid can operate as an excellent EG but, given the breadth of the module’s abilities, it feels like a shame to tie it up with such duties. Pam can help with EG-based assistance too if need be. 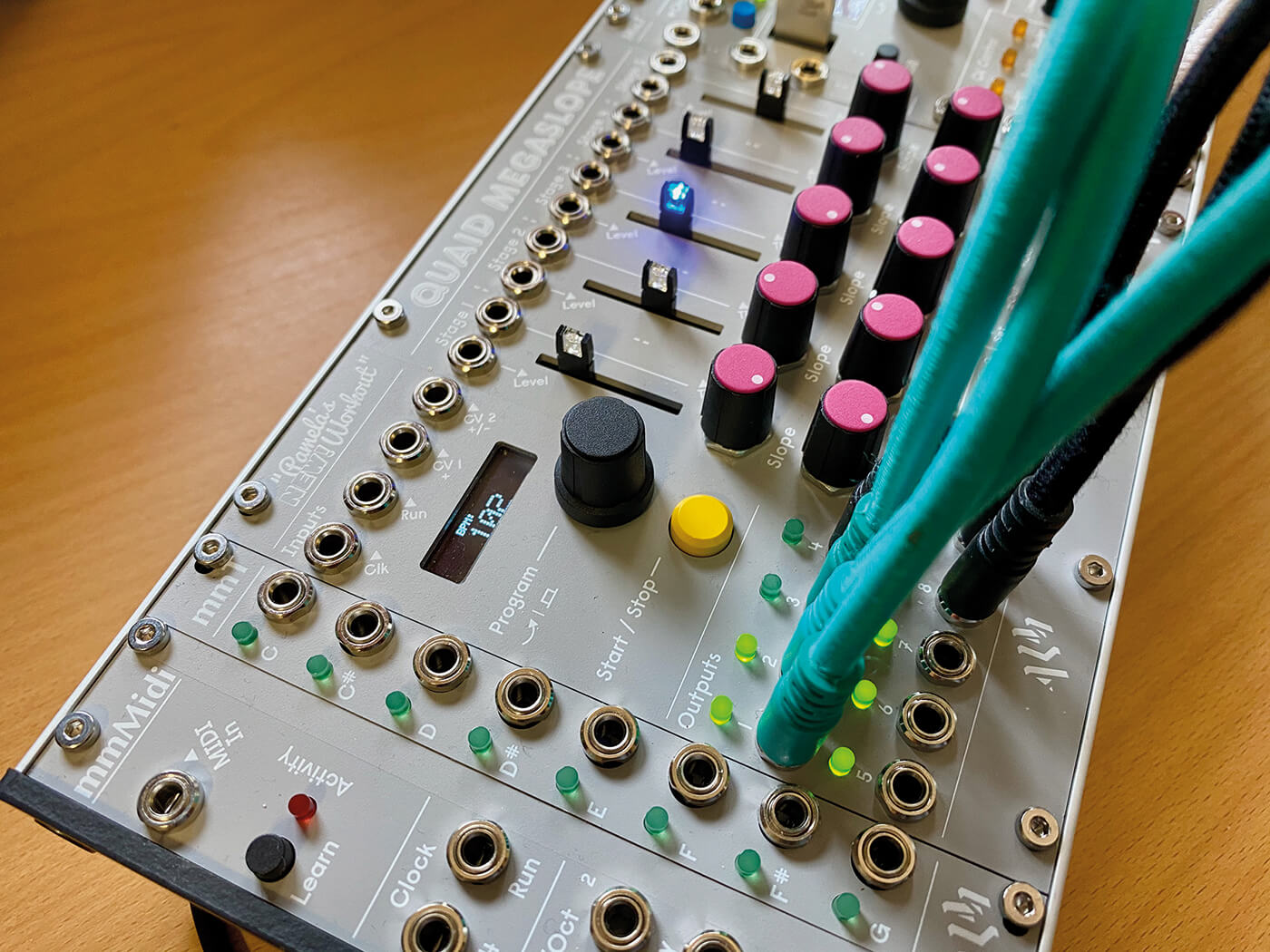 One of the Coupe’s biggest strengths is its coupling of source tone generators. The first of these is squarely digital. Squid Salmple (that’s not a spelling mistake) is a sample-based module whose tricks, in line with ALM’s manifesto, go beyond those of traditional sample feature sets.

Squid has eight channels of sample loading and triggering, at 44.1kHz/16 bit. This is CD-quality audio, and you’ll find 700 royalty-free samples loaded on an ALM USB drive out of the box. Among them, expect all the major drum machines from the past 40 years or so, including the Roland TR-808, TR-909 and TR-606, and the LinnDrum, all stored in convenient patches. There are also samples from ALM products, including the percussive sounds of the Dinky’s Taiko and Akemie’s Taiko modules.

With its crisp display not only guiding you through the loading and saving of samples but also providing feedback while you perform edits, it seems that the Squid module is geared towards live performance. One of its edits is labelled Quality, which allows you to incrementally reduce a sample’s bitrate. Performed at the channel/individual sample level, you can use this to decimate your timbres as required. Samples can also be quick-looped, using single trigger, looping and reverse options. Loops can be played forward, backwards and as traditional straight loops.

Squid Salmple lends itself nicely to drum triggering and percussive sounds, and the final three channels are equipped to handle pitch via dedicated CV inputs. It’s entirely possible to sample a source tone from an external synth and re-trigger it in the form of a sample. Admittedly, due to the limited sampling capacity, the resultant sound might not be quite as generous in time as the original synth but it’s an interesting creative proposition nonetheless.

Unsurprisingly, there are copious modulation and control possibilities built into Squid Salmple, making it a flexible tool that can help you get pleasingly anarchic with your sounds. In a slight move away from regular sample duties though, Squid can also sample CV signals, which can be triggered and replayed, being routed to other system components. You could, for example, sample a riff and make it open to the triggering of an entire phrase, though in this setting the diminished sampling time might curtail some longer phrases.

The sum of its parts

Alongside the sample playback elements, the Coupe boasts a wonderful pairing of oscillator and filter. The MCO module is, at first glance, a traditional VCO. But it’s main tonal source is a fully sweepable wavetable, which takes in white noise, triangles, saws and other harmonically rich and succinctly digital waveforms along the way. Sweeping through the wavetable is smooth and invites modulation from elsewhere in the system. Alongside the main output, there are two additional outputs for a square-based sub-oscillator and a pulse-width-modulated wavetable, which offers a gnarly timbral colour derived from the
main tone of the MCO.

Pair the MCO with the MCF filter, billed as a classic analogue multimode filter, and you’ll get a real sense of depth and overtone. The MCF offers separate outputs for high-pass, band-pass and low-pass filters, and has a slightly overdriven quality that’s colourful and weighty. Both the cutoff and resonance can be controlled via CV, which also opens up the potential to use the MCF as a simple sine-based oscillator. In our tests, the filter tracking is excellent, with plenty of potential for conjuring those punchy sinusoidal sounds that sit so well against much of the sampled content.

Of course, these stellar sound sources require some form of VCA amplification, which with this ALM unit comes courtesy of the super-clean Tangle Quartet. This module presents four channels of punchy and transparent VCA, which can be siphoned into individual outputs or
collated as a single output mix. 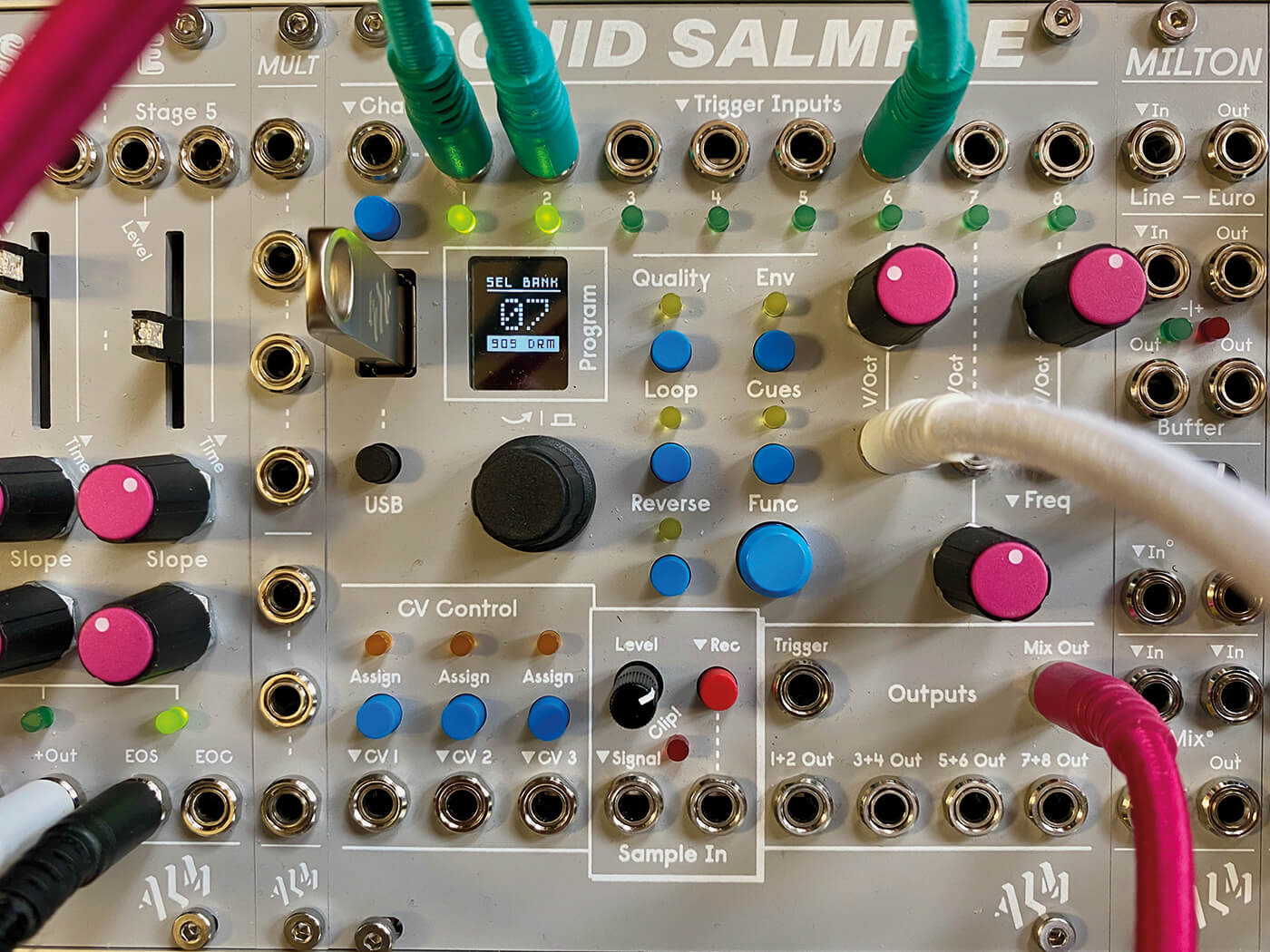 Completing the Coupe’s line-up are some useful utility modules: the HPO, the Mult, and the Milton. The former is a convenient output stage for either headphone use or for presenting a line level for a mixer, and the basic Mult module provides the onward trajectory of two signals. But it’s the new Milton module, making its debut on the Coupe, that is the standout. Milton provides excellent resources in a tiny HP footprint. Apart from its one-in, three-out buffered mult, the module also offers a three-in, one-out summing mixer, alongside an attenuator. One of the most useful inclusions though, is its ability to input an audio line input, converting the audio to a signal suitable for Eurorack use with minimum fuss. Despite its small 4HP footprint, Milton packs vast functionality.

Anyone familiar with ALM’s work will be heartened to learn that the System Coupe is on par with the company’s best modules – of course, it should be, given that many of those modules appear as part of this complete system. Those modules come with a change of fascia here but it all adds up to a classy-looking all-rounder.

The Coupe package has all the bases covered, offering drum sounds in either synthesised or sample form, and with superb synthesis potential. It’s strong in all aspects, providing creative colours at just about every turn. The potential for modulation should maintain user interest long into the future too. The System Coupe is a superb little runabout. Take one for a test drive and you’ll be putting in the miles in minutes. 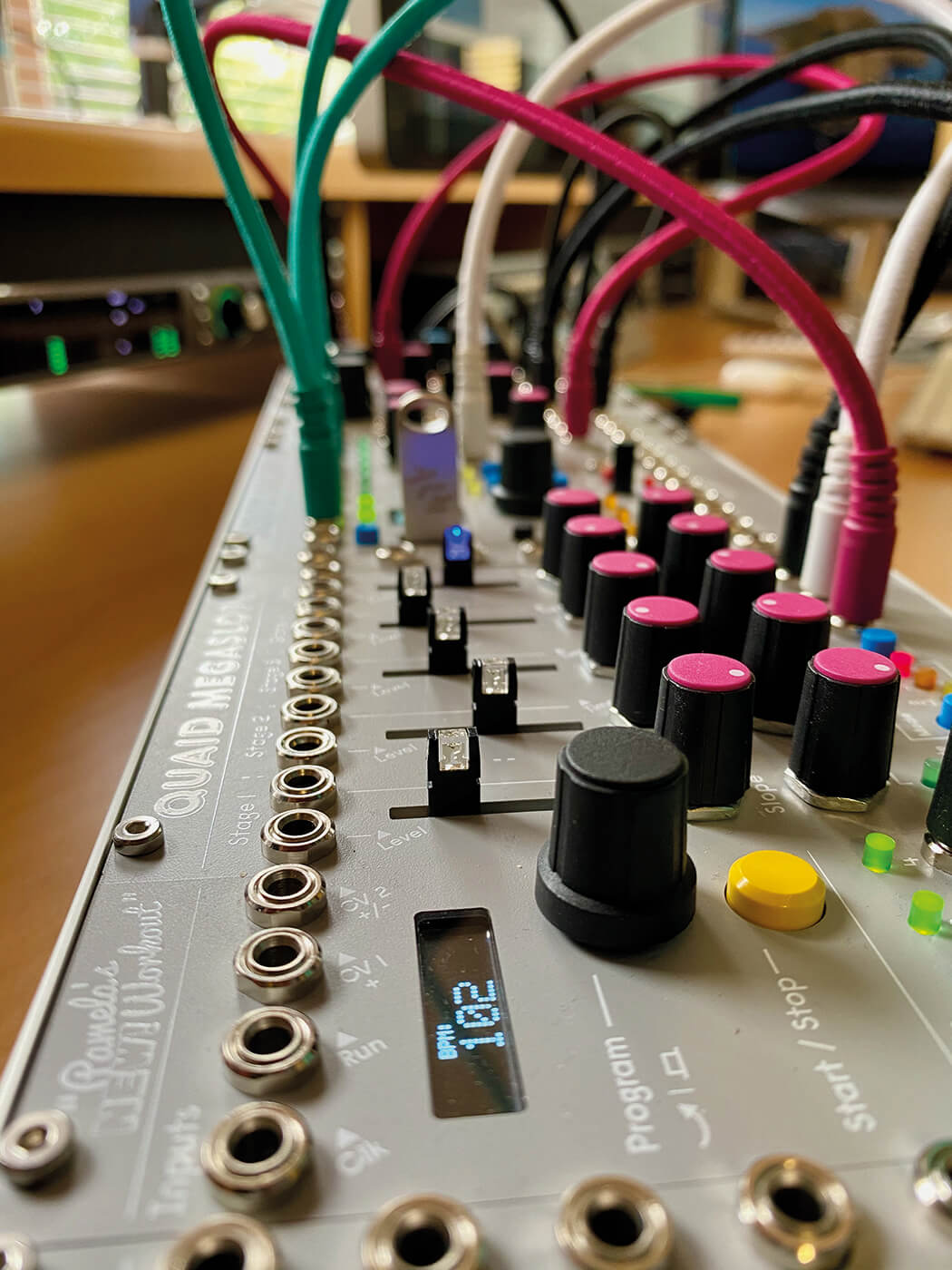 The System Coupe is an excellently compiled system, and should be hugely tempting to anyone looking to buy a single system for the first time or to upgrade from another more simplistic unit, such as the Moog Mother-32. The Coupe is tremendously capable, providing a broad palette of sounds, control and modulation possibilities.

For anyone already experienced with Eurorack, the Coupe is a superb way to get your hands on a number of fantastic and useful modules at once, all of which can be further integrated into a larger system. This unit comes with a skiff-load of sensational content at a reasonable price, especially compared to how much these modules would cost if you bought them separately. This truly is up there with the finest that Eurorack has to offer.

The Cartesian offers both sequenced and randomised options, alongside a digital and an analogue oscillator. There’s also the ubiquitous Maths module for complex LFO and envelope triggers.

This complete set-up features five Endorphin modules, and onboard MIDI control, plus one of the finest complex oscillators in Eurorack, the Furthrrrr Generator. This stellar unit can do subtle and aggressive.