This little brother of the PRE-73 is a colourful vintage-sounding preamp. John Pickford takes a listen… Details Price £189 Contact Golden Age Project +46 322 66 50 50 Web goldenagemusic.mamutweb.com The big brother of this diminutive preamp, the PRE-73, has won many friends in the audio industry thanks to its Neve-like sound quality at a […] 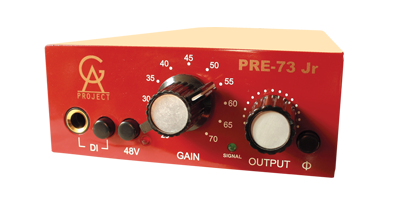 This little brother of the PRE-73 is a colourful vintage-sounding preamp. John Pickford takes a listen… 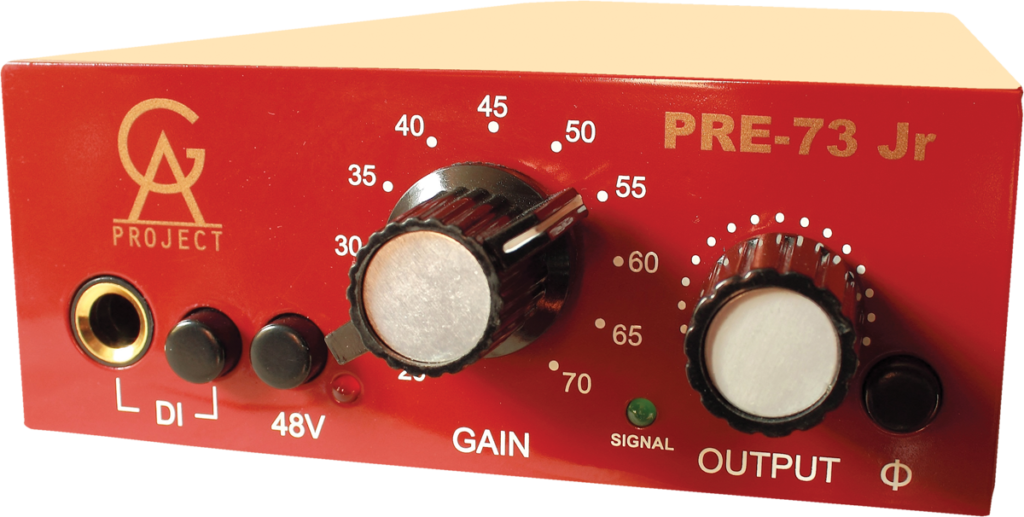 The big brother of this diminutive preamp, the PRE-73, has won many friends in the audio industry thanks to its Neve-like sound quality at a price far lower than that of a genuine Neve product. We were most impressed with the all-singing, all-dancing PREQ-73, which offers all the features of the standard model along with two bands of sweet-sounding equalisation.

Like the larger units, this junior model delivers up to 70dB of 1073-style microphone preamplification, while doing away with features that some users might not need. The first thing we noticed, apart from its unusual proportions, is the simplified input gain rotary switch. Whereas the other models feature the unique 1073-style Mic/Line switching arrangement, the Junior offers mic gain only in 5dB steps from 20 to 70dB. A continuously variable Output control pot is provided, along with an instrument DI input.

Three plastic push-buttons are provided, which engage the DI input, 48-volt phantom power and phase invert; a single LED light indicates the presence of signal passing through the unit. 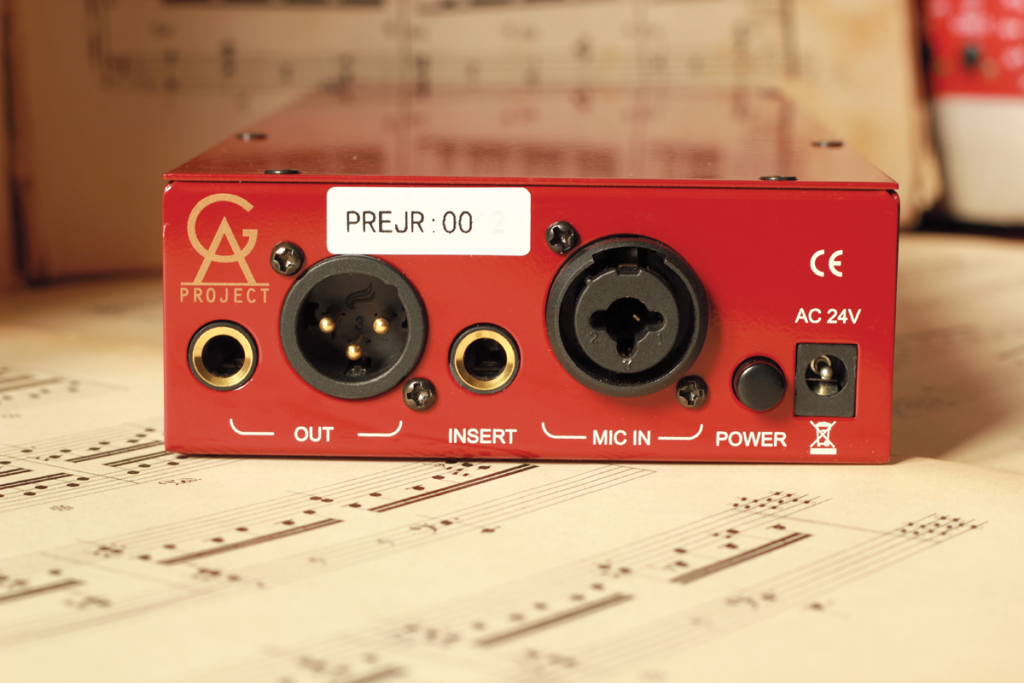 At the rear is a combo XLR/TRS input, as well as separate outputs for XLR and TRS jacks. An insert jack is also provided to allow the connection of an auxiliary unit such as an equaliser. External power is provided via a 24V wall-wart supply, which some may see as low-budget, however top-quality components are used internally.

Like the PREQ-73, the Junior feels solid and weighty, despite its small proportions which allow for four units to be mounted in GAP’s 19-inch rack kit, the UNITE MKII. Inside, the discrete components are laid out neatly, with the superb Carnhill input transformer on full display.

Carnhills are widely used in 1073-type units and contribute to the Junior’s vintage sound. It’s not the most transparent transformer, but it has bags of character and responds well to being driven hard. The Junior’s circuit is quite straightforward in a traditional style, with just three transistors used in the gain stage and three in the output stage; the output transformer is driven by a 2N3055 power transistor running in pure Class-A mode.

We used the little unit with a variety of microphones, ranging from our vintage, valve-driven Neumann U67 condenser to our Shure SM57. With 70dB of gain on tap, we were able to use our insensitive and power-hungry Coles 4038 ribbon mic on a gently picked acoustic guitar without generating too much noise. In fact, even though the unit errs on the side of musically enhanced harmonic distortion, much like the classic Neves, it operates with an impressively low noise floor.

Alternatives
The same great sound with added two-band EQ is available with GAP’s PREQ-73 (£329). For a different type of vintage solid-state sound try either Warm Audio’s WA12 (£349) or Black Lion Audio’s B12A (£372). Both units are based on the classic API 312 design, arguably Neve’s main competitor back in the 1970s.

Junior Senior
As with any preamp, the Junior offers the cleanest tones when the output is set to maximum with modest input gain. Dialling in more gain to drive the input transformer harder, while easing back on the output, produces a more saturated tone in keeping with the unit’s vintage character. 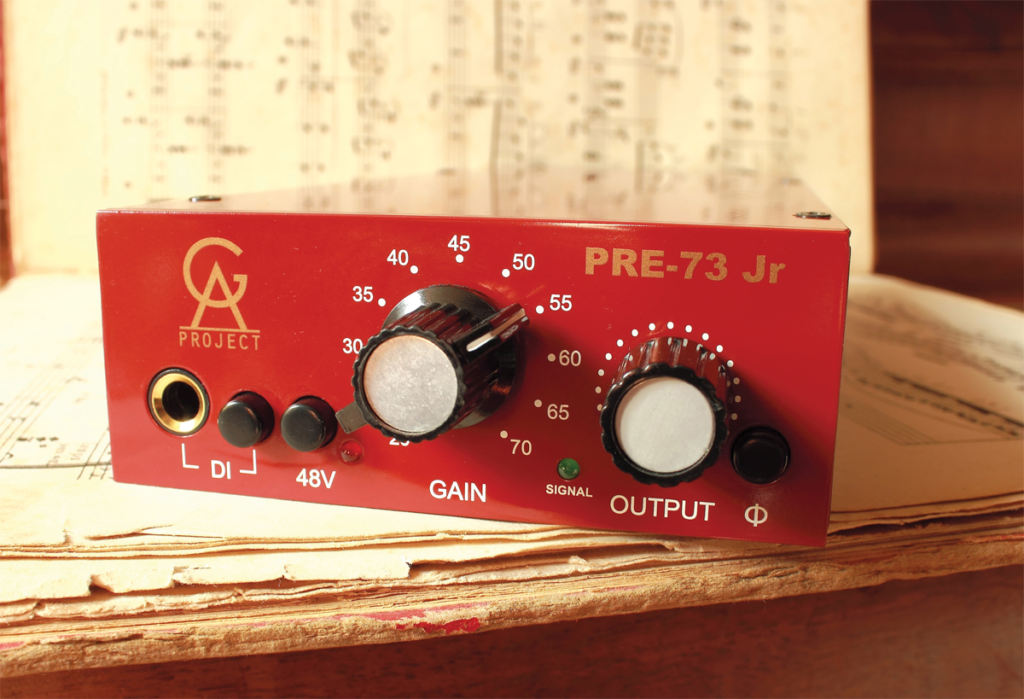 We used this technique recording a rather shouty male rock vocal, the added grit lending the sound a biting edge that still retained warmth in the lower registers. Compared with the mic pres on our 1980s DDA console, the PRE-73 gave a more full-bodied sound with plenty of low-end heft.

However, while the top end is nicely extended, the Junior couldn’t quite match the silky high frequencies of our reference valve units. The DI input is useful and sounded good enough with our old 1960s Vox Continental organ that we didn’t bother feeding it through an amplifier.

The PRE-73 Jr is a great, affordable way into the classic 1073 sound, big and punchy – some might say larger than life – but with a musical heart. Other preamps may offer more in the way of features, but that’s missing the point. If all you require is good, simple microphone preamplification with a vintage solid-state sound, the PRE-73 Jr is well worth auditioning. 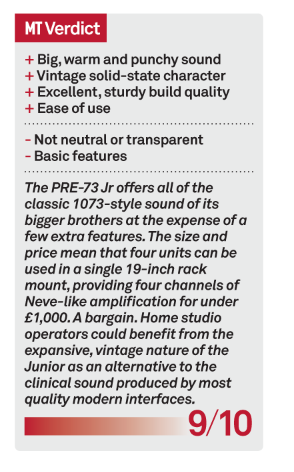