This Golden Age reboot of a classic Teletronix solid-state compressor from 1969 has John Pickford basking in its vintage warmth…   Details Price £425 Contact Runway UK 01293 226270 Web www.goldenageproject.com We seem to be living in a golden age for high-quality, inexpensive hardware. Never before have there been so many classic designs delivering professional […] 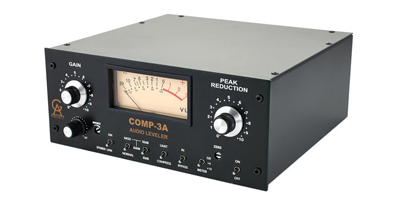 We seem to be living in a golden age for high-quality, inexpensive hardware. Never before have there been so many classic designs delivering professional performance at prices that would have once bought you only mediocre, home-studio kit. Bo Medin, head honcho at Golden Age Project, is not only passionate about classic audio designs, but also committed to making those designs affordable for pro studios and home recordists alike.

We were most impressed with his Neve-styled microphone preamplifiers, having worked with both the PREQ-73, a mic-pre with high- and low-shelving EQ based on the legendary 1073 design, and its more basic brother, the PRE-73 Jr. Now, Bo has turned his attention to another classic vintage design, the LA-3A Classic Audio Leveler. Originally launched in 1969 by Teletronix, the solid-state LA-3A was a replacement for the valve-driven LA-2A, which some consider to be the greatest compressor of all time. Golden Age Project told us it will soon be offering its own version of that highly revered valve unit – we eagerly await the opportunity to hear it.

The COMP-3A on test here is a single-channel, half-rack design closely based on the LA-3A, although some switches found on the rear panel of the old units have been moved to the front panel for easier access. As an electro-optical compressor, the COMP-3A’s circuit makes use of an electro-luminescent panel along with photoelectric cells to control gain. At the heart of the unit is the GAP T4 electro-optical attenuator, which makes use of two matched US-made Silonex NSL-5910 photocells.

Retaining the familiar styling of the LA-3A, the COMP-3A features two large continuously variable pots, one of which controls Output Gain, while the other controls Peak Reduction.

Turning the latter control clockwise increases the amount of compression; the resulting reduction in signal level can then be corrected by increasing the Output Gain. The unit’s response characteristic is programme-dependent so there are no user controls to alter attack and release times. Nor are there separate controls for threshold or ratio; instead, there is a switch that changes the unit’s operation from Compress to Limit. In Limit mode, the compression ratio becomes higher when the unit is used to compress heavily; the standard setting for the COMP 3-A is Compress.

Typically, the COMP-3A’s attack time is 1.5ms or faster, depending on the source material. The release time operates in two stages, with a 60ms response time for the first 50 per cent of the stage and anything between 0.5 and five seconds for the rest.

Making use of the Gain Mod switches, which mimic a popular mod often made to the LA-3A, alters the compressor’s behaviour. In normal operation, the input signal enters a 20dB resistive pad before it’s fed into the input transformer: this pad can be disconnected via the 50/30dB switch if greater input sensitivity is required. Engaging the Mod switch decreases gain in the output stage by 24dB and, when this is used in conjunction with the higher 50dB input, the unit’s noise floor is lowered. Additionally, using this setting lowers the compressor’s threshold so that heavier compression can be usefully applied.

Other front-panel switches are provided for power, bypass, stereo linking and switching the large VU meter to read either gain reduction or output level. Two settings are provided for output level, +4 and +10, which relates to the reference level when the meter reads 0 VU. The +10 position prevents the meter needle from being pinned to its endstop at high output levels. The meter should read 0 VU when no compression is applied; however, an adjustment pot located in a hole on the front panel is provided to recalibrate, should the meter drift out of true. A similar adjustment pot allows for two units to be balanced for stereo operation; full instructions for this procedure can be found on the company’s website. 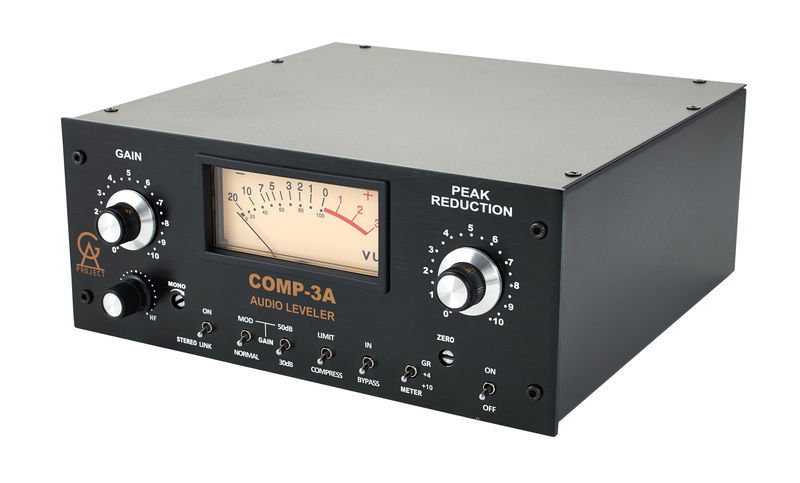 The final front-panel control to mention is the HF control, which is, in effect, a high-pass filter. This is a useful additional feature not found on the original LA-3A, or indeed many of its clones. With the control set to Flat, the unit behaves just as the vintage units, while turning the knob clockwise makes the side-chain circuit less responsive to low-frequency content. The COMP-3A’s high-frequency response can be further tailored by selecting alternative output transformer-loading resistors via an internal jumper.

Connections on the pack panel include both XLR and TRS input and outputs for flexibility, along with a link jack and switch for connecting to an additional unit to enable stereo operation. Power is provided by a 24V AC adaptor.

The Golden Age COMP-3A certainly looks the part. Like the original model, it’s visually dominated by the large central VU meter and two main user controls. The additional front-panel switches don’t detract from the retro look and the extra HF pot is in keeping with the late-60s vibe. The continuously variable pots feel smooth in use and the overall build quality is good.

We first used the COMP-3A to compress a lead vocal that had been recorded with our valve Neumann U 67 through a valve pre-amp and then given a mild squeeze with our Summit Audio TLA-100A. As this was an all-valve signal chain, we found that the COMP-3A’s vintage transistor design added extra colour. Using the Peak Reduction control to dial in enough compression so that the VU meter read around seven dB on the loudest parts, the sound levelled out nicely once we’d made up the gain. Sitting in the mix, the vocal sounded punchy with added presence. Experimenting with the Limit function proved that even with the heavier compression ratio, it was difficult to make the unit respond in an unpleasant way.

Electro-optical compressors such as this are inherently smooth and musical in nature, while the absence of lots of user-adjustable controls makes the COMP-3A simple to use. Those who like to tweak their sounds for hours on end might bemoan the lack of controls. However, even with full attack and release controls, most compressors struggle to match the COMP-3A’s natural-sounding two-stage release character. Similarly, the programme-dependent response prevents vocalists from developing a lisp due to overly fast attack times being used.

By way of comparison, we swapped out the COMP-3A, replacing it with our Warm WA76, which is a copy of the Urei 1176. The original LA-3A shared several components and design features with the 1176, both being early solid-state designs. While the WA76 sounded a little more open and transparent, it didn’t have the low-mid warmth or upper-mid presence that gave the COMP-3A the edge to make the vocal cut through the mix without sounding over-exposed.

For a great lead-vocal sound with smooth, natural-sounding dynamics, set the Gain switch to 50dB and use Compress mode rather than Limit. Using the Peak Reduction pot, dial in enough compression so that the VU meter shows around five to seven dB of gain reduction. For a more obviously processed, up-front sound, increase the Peak Reduction and experiment with the Limit function. Alternatively, you could print the compressed vocal track and send it back through the unit for a second squeeze.

Warm Audio’s WA76 (£499) is a clone of the Urei 1176, another iconic 1960s solid-state dynamics controller. It features individual attack and release controls as well as four ratio options – five if you count the classic ‘all buttons in’ method for a heavily processed, smashed sound.

Throughout the review period, the COMP-3A was pressed into action with a variety of voices and instruments. Guitars in particular, both acoustic and electric, benefitted from the unit’s slight treble emphasis, while bass guitar sounded smooth and even when processed through the ’76 limiter first to tame the biggest peaks, then sent through the compressor with the HF control set to around 10 o’clock to round off the sound.

It would have been nice to have a pair of COMP-3As in order to perform some stereo buss compression, however we weren’t going to let that stop us from experimenting with sending wideband audio through the unit. We’d had a 60s-influenced group in to record a while back and so we dug out the stereo mix and collapsed it into mono, sending the single channel through the compressor. With the true-bypass switch, the compressed version sounded livelier and more coherent; a pair would be ideal for stereo mix-buss and mastering.

The Golden Age COMP-3A performed exceptionally well, imparting a lovely vintage character that’s warm, firm and punchy. It has a musical heart that will add character to flat, lifeless sounds. Engineers who value transparency and neutrality above all else in dynamics control may find the unit too tonally coloured, while those seeking VCA-style smashed, surging and pumping effects will find the unit too even-handed and controlled. But for a no-nonsense, easy-to-use compressor with a lovely vintage tone, the COMP-3A ticks all the right boxes. 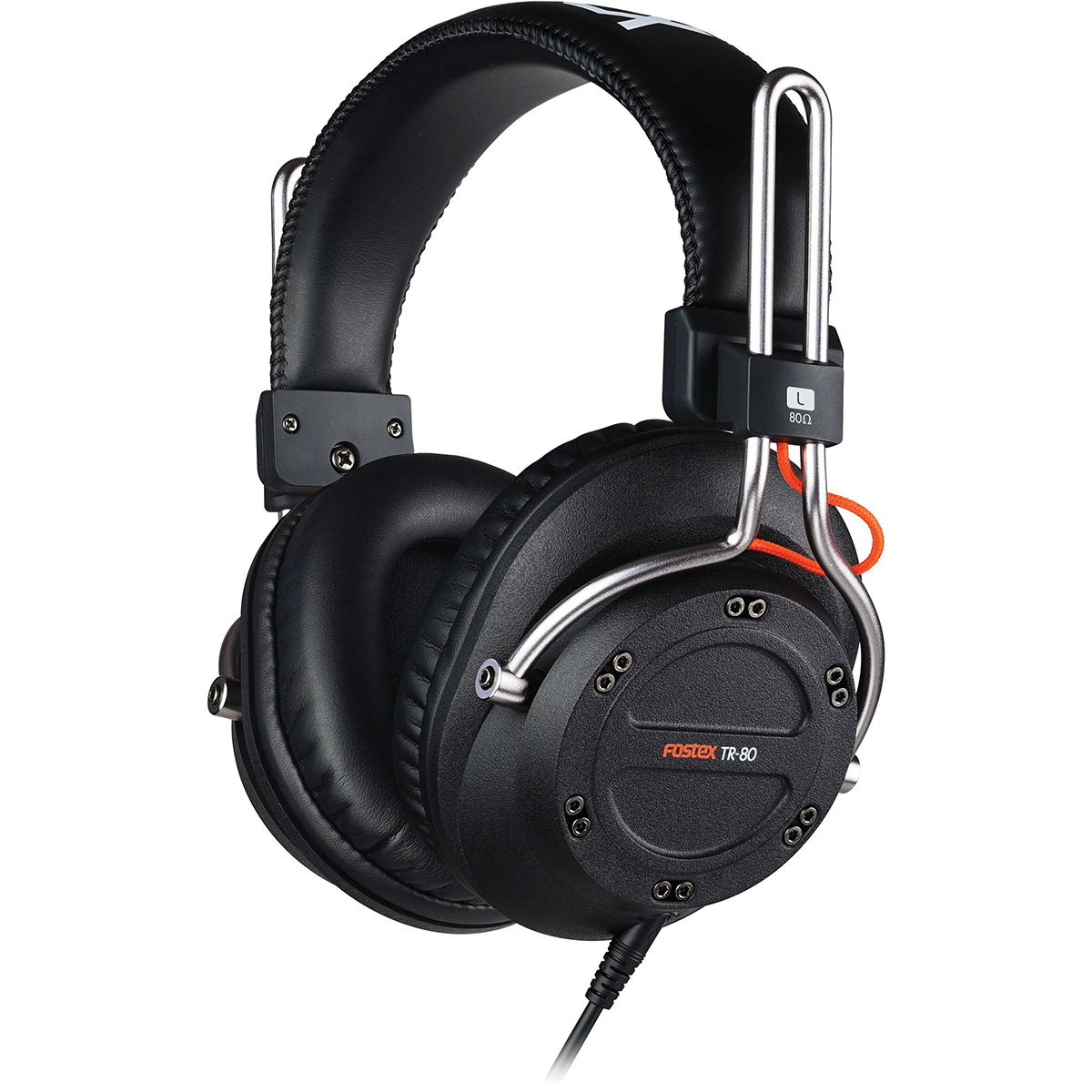