Offering a slice of classic vintage vibe at just a snip of the typical price is Golden Age’s latest mic pre. John Pickford sounds it out.     Details Price £329 Contact Golden Age Music – +46 322 66 50 50 Web www.goldenagemusic.se Amazon.co.uk Widgets Vintage is something of a buzzword these days, not least in the […] 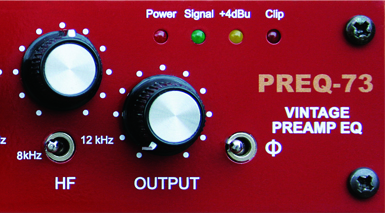 Offering a slice of classic vintage vibe at just a snip of the typical price is Golden Age’s latest mic pre. John Pickford sounds it out.

Vintage is something of a buzzword these days, not least in the world of pro audio. Bo Medin – the brains behind Swedish company Golden Age Project – clearly understands this, marketing the PREQ-73 as a ‘vintage-style’ preamplifier and equaliser. Crucially, he also fully understands why certain vintage units sound so musically appealing, embracing their inherent distortions and colour rather than striving for a more modern clean and transparent delivery.

The PREQ-73 is based on the classic Neve 1073 launched in 1970, aiming to re-create its warm, punchy and somewhat larger-than-life sound by utilising good-quality discrete components such as tantalum capacitors and employing the Carnhill input transformers that can be found in several 1073 clones.

The unit accepts both microphone and line sources via combo XLR/TRS jack inputs at the rear of the unit, while output comes from separate XLR and TRS jack sockets; a high-impedance DI input is located on the front panel. Controls on the front panel include a Neve-style rotary-switch for line and mic input gain, an output level control, and a pot each for the low-frequency and high-frequency EQ shelves.

As you would expect, switches are provided for 48v phantom power and invert-polarity as well as a LOW-Z switch that, when engaged, lowers the impedance on the mic input from 1,200 to 300 ohms. Basic output-level metering is displayed via a three-step LED meter.

Sensitive Kind
The PREQ-73 offers up to 80dB of microphone gain, which is more than enough for even the most sensitive of mics. The unit makes use of two gain-stages: the first provides gain up to 50dB, while the second is employed in the signal path for input levels above this. Line gain-range is -20dB to +10dB, and all gain levels are selectable in 5dB stepped increments.

The equaliser is a simple two-band LF and HF shelving EQ, offering two selectable frequencies for each band, with 55Hz or 175Hz (+/- 15dB) available at the low end and 8kHz or 12kHz (+/- 20dB) covering the upper frequencies. An insert point enables another unit to be connected pre-EQ, which can be useful if a signal needs compressing before equalising, for example. The unit can also be configured post-EQ by removing the top-plate and simply moving the internal send and return leads on the circuit board. 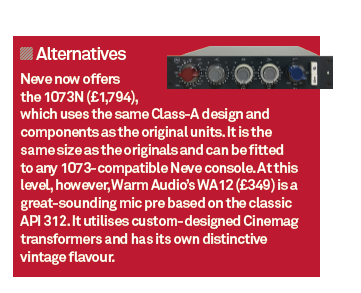 Mic Matters
We tested the PREQ-73 with a variety of microphones, including our valve Neumann U67, FET 47, AKG C414, Coles 4038 ribbon and several dynamic types by Shure, Beyerdynamic and Sennheiser. With plenty of gain on tap, we could easily detect the distinctive character that the unit imparted onto our microphones without masking their individual sonic personalities. In a nutshell, we found the unit to have an expansive sound that is firm in the low registers, full-bodied in the broad midrange, and quite sweet at the highest frequencies. In terms of midrange clarity and top-end extension, the PREQ-73 couldn’t match our considerably more expensive Earlybird valve mic pre, but easily outclassed the preamplifiers in our DDA console, particularly in the lower registers.

Tracking a female backing vocal using our AKG C414 and adding a little top-end sparkle at 12kHz gave excellent results when selecting the 1,200-ohm tap. Dropping to 300 ohms, the sound became a touch rounder, emphasising the midrange to give a slightly forward presentation that better suited electric guitars and keyboards. We found the lower impedance just right when recording a Fender Rhodes/ Twin amp combo with a Beyerdynamic M 201. Best results were achieved when recording a Gibson bass through a Fender Bassman mic’ed with a Neumann FET 47. With this setup the preamp produced a fat, punchy sound that had great definition with real bottom-end weight.

Testing Times
During our testing, the PREQ-73 impressed us time and again, with its big, meaty presentation adding a musical quality that enhances most audio signals. Fans of ultra-transparent preamps might find the unit to be a little too coloured and characterful, but aficionados of the classic Neve sound will love the great vibe it brings to the party. The EQ, while limited, is sweet and musical, although the addition of a high-pass filter would have been useful. Punching well above its weight, the PREQ-73 delivers a large slice of 1073 sound at a fraction of the price. 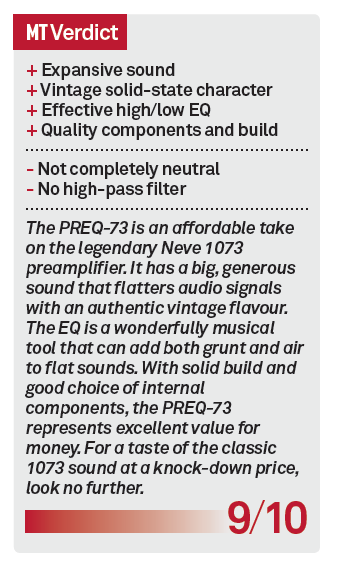 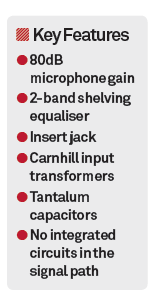