After our recent review of Korg’s ARP Odyssey Andy Jones takes a look at the latest software version of the ARP. An alternative, and then some… Details Price £139.99Developer GForce Contact Via website Web www.gforcesoftware.com Amazon.co.uk Widgets As timings go it couldn’t get much better. Last month I had the pleasure of reviewing Korg’s remake […] 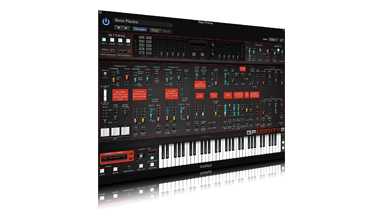 After our recent review of Korg’s ARP Odyssey Andy Jones takes a look at the latest software version of the ARP. An alternative, and then some… 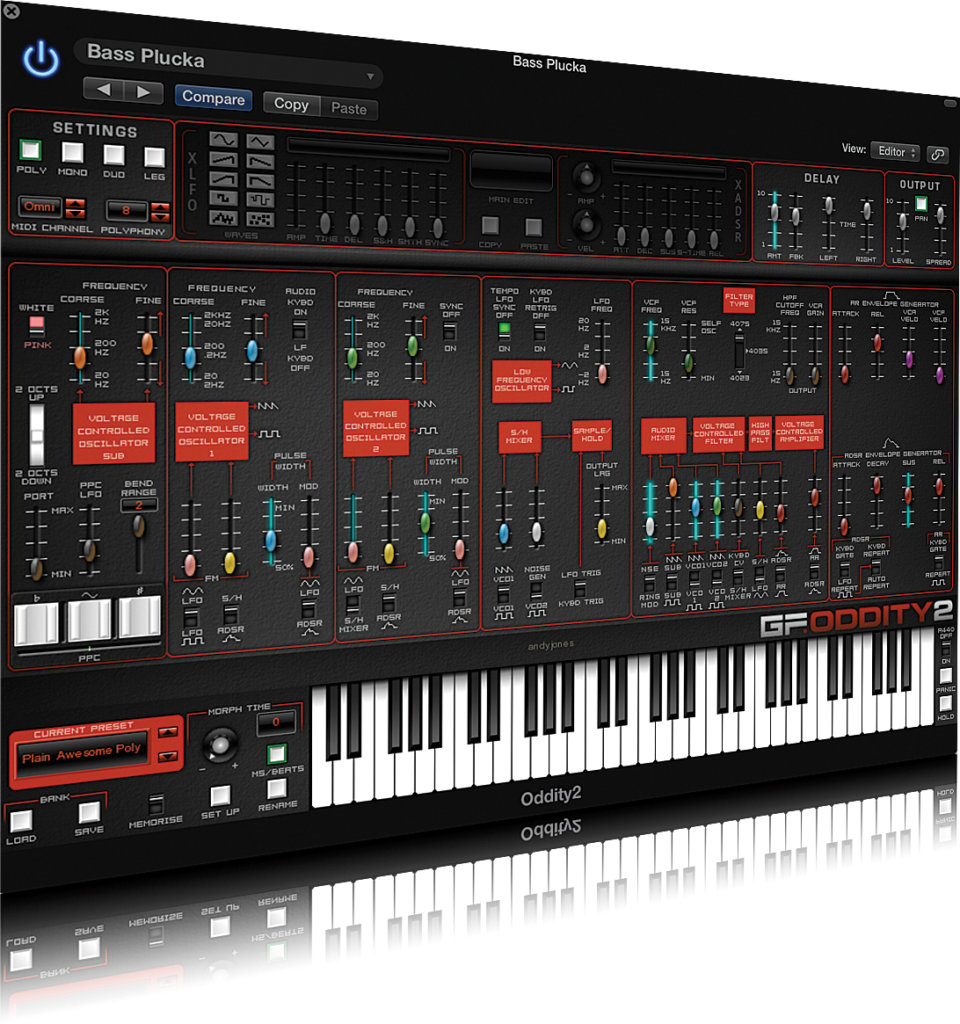 As timings go it couldn’t get much better. Last month I had the pleasure of reviewing Korg’s remake of the classic ARP Odyssey synth (quick recap: it’s an Odyssey, but smaller) and recommended GForce’s Oddity as the best alternative to it, albeit a software alternative. And now this month – as the synth gods would have it – we get our hands on the upgrade to that software, Oddity2!

You’ll forgive me, then, if I continue the ARP excitement from last month and retread some of the historical ground from that review for those of you who haven’t had the sheer pleasure of reading it.

The original Odyssey was made between 1972 and 1981, a brash alternative to the more rounded Minimoog. Its distinct tone won it fans among pioneers of the time including Gary Numan, John Foxx and Kraftwerk, so it certainly made its mark on music.

Until last month, however, few – if any – had attempted to remake an Odyssey in hardware and surprisingly few had remade it in software. But the first and the best software version was the GForce Oddity…

Click Here for an overview of the GForce Oddity2

One of the First

The original Oddity was one of the most successful realisations of classic synth hardware in software. John Foxx said of it: “The Oddity is beautifully realised. All the power, character, precision, intricacy, grunge and sonic extremes of the original.” So it has become almost a classic in itself, something we’d not say lightly about any software. There’s been almost a decade between the first version and Oddity2 on test here, so what’s new?

Oddity2 boasts a lot of features over the original, and the hardware synth come to that. This could largely be because Oddity v1 arguably concentrated on realism, copying many of the idiosyncrasies of the original whereas Oddity2 concentrates on refinement and taking the synth into new territories. As GForce says, “it transports the spirit of the original into a new dimension.”

Oddity2 can be used as an effect so you can route audio through its filters. And talking of these, it has three filter modes plus an extra oscillator and can apply LFO and ADSR to many on-board features. The filter section is initially the most interesting. Rather like the hardware last month you can select the filter type between 4023 (2-pole) and 4035 and 4075 (4-pole) so you can effectively switch between the three main original Odyssey versions by doing that, although GForce don’t make as big a fuss about this as Korg do on the hardware.

This aside, the biggest and most obvious extra for Oddity2 is, wait for it, polyphony! While I was reviewing the re-engineered Korg hardware last month, as much as I enjoyed the souring, authentic leads and rasping tonal rises and falls I did wonder how good a polyphonic version would sound… And now I have it.

This is without a doubt the killer feature on Oddity2 and one that many have been waiting for. You’re turning a duophonic classic into another beast entirely – a big fat beast with added claws, teeth and a belly the size of Bournemouth. Yes, Oddity2 comes into its own when you play poly, and you will do just that. 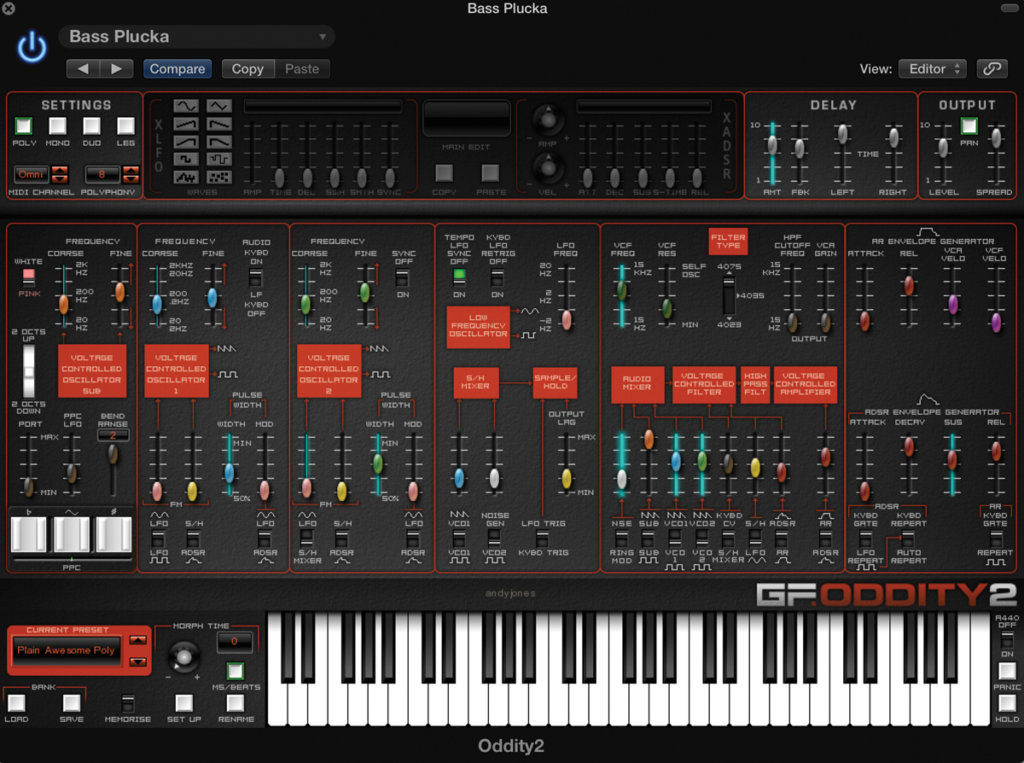 We won’t go too much further into the architecture of the original synth – you can read more about that in the review last month – and we’ve listed some of the other extras you get with Oddity2 in the box below.

The truth is I don’t really have the time and space to dwell on that as there is the small matter of over 1400 presets to get through. Not that I encourage preset use – especially when you have a synth as easily programmable and relatively easy to get to grips with as Oddity2 – but when someone has taken the time to put so many sounds together, and they are this good, well, it would be rude not to use them…

But while we’re on the subject, one other feature that is worth detailing before we get too carried away with the presets is the ability to morph between them. It’s a feature I’m seeing more of and one that I enjoyed back on my old Yamaha SY22 hardware synth. Probably just a matter of raising the volume of one while reducing that of the other, but who cares? It’s great!

I haven’t come across this many presets since reviewing Rob Papen’s Blue II and I actually criticised that synth for having too many sounds! It’s not a criticism to level at Oddity2 though, although the presets are occasionally a little random in order.

Stepping through the sounds and a few things quickly become very apparent. The original sound of the Odyssey is evident on enough presets to maintain Oddity2 as still one of the best emulations out there. There are also plenty of obvious and not so obvious nods back to many of those synth pioneers I mentioned, with presets named after them or their classic tracks. 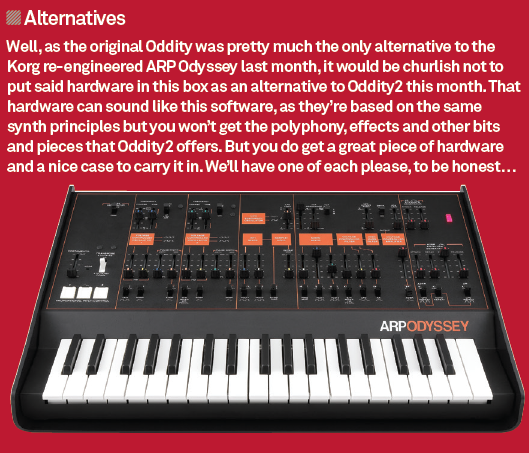 Stand up Barbieri, Foxx and Currie! It’s a lovely touch and a great nod of appreciation, but we’re not just dwelling in the past here as there are a load of contemporary sounds in the pot too. So basses, leads, sounds with movement and very, very electronic sounds are catered for across a surprisingly wide amount of genres. And pretty much all of the ones I auditioned set the stirrings of inspiration in motion. I’m going to be busy over the next few weeks…

So Oddity2 is a triumph. It comes packed with many features over the original – we love the extra mod options and using it as an effect.
But the best news comes by way of the Polyphonic mode, a feature that takes Oddity to new heights.

You want a polyphonic Odyssey? I said, a POLYPHONIC ODYSSEY? You got it, and it’s great. And, really, I don’t need to say any more than that. So I won’t 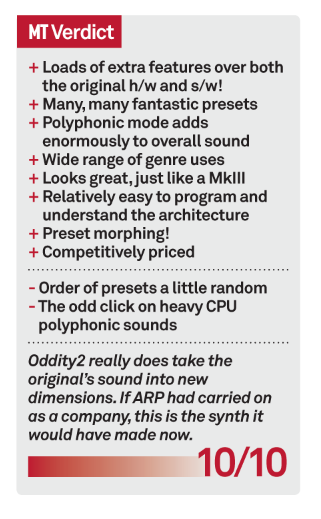