Does this authentic valve recreation of the classic LA-2A compressor/limiter have what it takes to hit the peaks? John Pickford puts it to the test…

Last year, I reviewed Golden Age Project’s Comp-3A, the solid-state version of the valve (or tube, if you prefer) unit on test here. Both units’ origins can be traced back to Teletronix’s LA-2A, the legendary optical compressor launched way back in 1962 – the year The Beatles released their first single.

The Comp-2A is a 2U, half-rack, single-channel compressor/limiter with transformer-balanced input and output. It’s an optical-compressor design based around GAP’s version of the original T4 electro-optical gain-reduction module, used in the original Teletronix LA-2A. This unit’s T4B module makes use of two carefully matched Silonex NSL5910 photoresistors and a long-life electroluminescent panel for its gain control.

This is how the opto-compressor works: driven by the unit’s side chain, the panel becomes brighter as transient peaks increase in volume. The photoresistors’ impedance increases as the light-panel glows brighter, thereby reducing gain and levelling out (compressing) the sound. The higher the voltage, the more light is shone on the photoresistors. The side chain uses a 12AX7 double-triode valve, along with a 6P1 power pentode driving the electroluminescent panel.

The supplied thermionic valves are of good quality; however, gear-tweakers can replace these with premium-grade glassware, if desired. Four valve sockets are available – the fourth to accommodate a different type of output valve from the one supplied – but check GAP’s valve-substitution instructions carefully, as all four sockets must not be populated at the same time.

Visually, the Comp-2A is similar to the 3A, the main differences being the increased length of the casework and the inclusion of retro-style chickenhead knobs for the (output) Gain and Peak Reduction controls. A large, easy-to-read VU meter is centrally situated on the front panel and can be switched to show gain reduction or output level at +4 or +10dB. 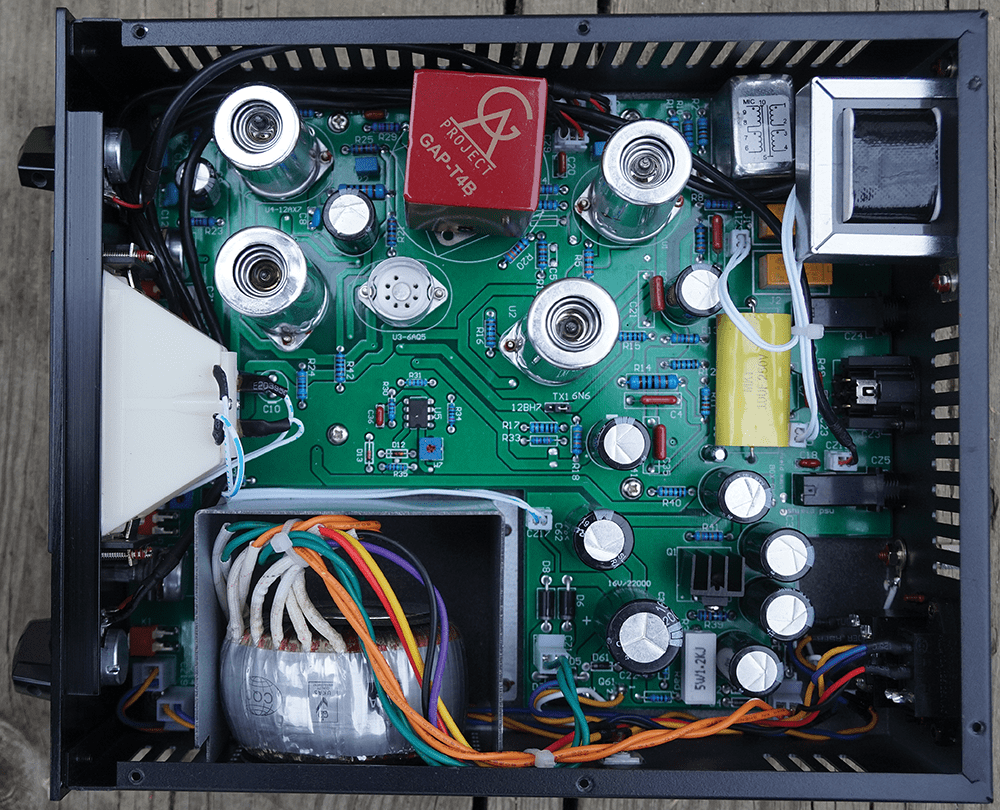 The meter can be trimmed via the Zero adjustment pot, which can be accessed through a hole in the front panel, should the unit drift out of true; a similar pot labeled Mono is provided to balance two units linked for stereo operation.

A useful control, not on the original LA-2As, is the HF pot, which is not strictly a high-pass-filter (though it does make the side-chain circuit more sensitive to mid and high frequencies above 1kHz – handy for some frequency-conscious compression applications). Bass-heavy mixes can often benefit from a mid- and top-end squeeze without the bottom end driving the unit too hard; leaving the control in its Flat position makes this unit behave just as the originals.

Like all 2A-type compressors, user-adjustable controls are kept to a minimum, ensuring the compressor is simple to use. There are no attack, release or threshold controls; however, a toggle switch enables the selection of Limit or Compress modes. The Comp-2A’s attack time is set at 10ms while the release time operates in two stages, with a 60ms response time for the first 50% of the release stage and anything between 0.5 and five seconds for the remainder. For many applications, the Compress mode is ideal, though Limit can be used for heavier dynamic control. Being program-dependent, the limit ratio increases with greater peak reduction.

Straight out of the box, I powered up the Comp-2A and left it to warm up for 30 minutes to come on song. The previously reviewed Comp-3A was available for comparison, so I was keen to hear how the thermionic nature of the newer unit affected the behaviour and sound of what is essentially a similar type of compressor. 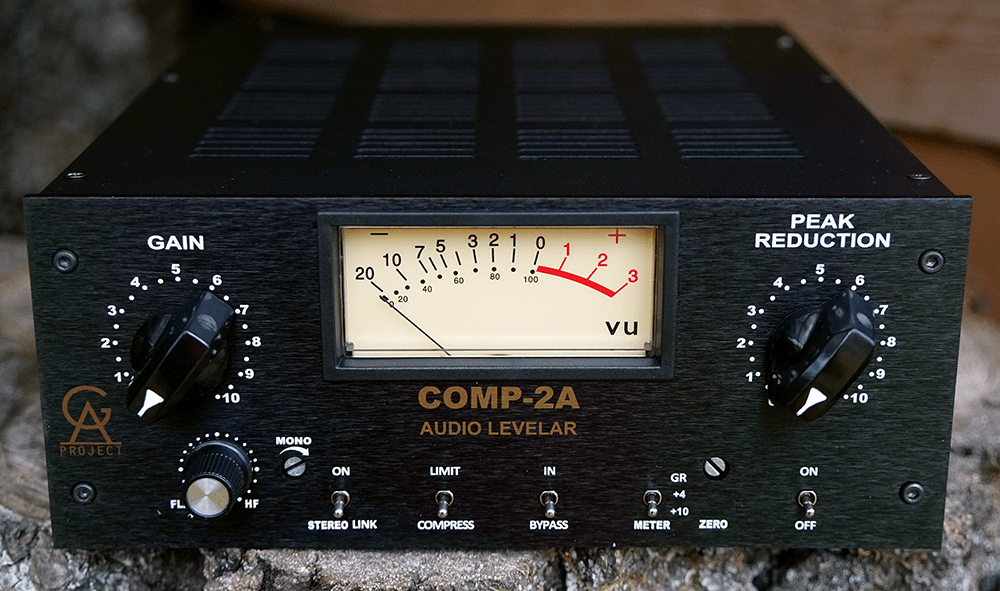 First test was to strap the Comp-2A across a pre-recorded vocal, which had been tracked through our Warm Audio WA76 limiter, just to tame the wildest peaks. The WA76 is, as you may have guessed, a copy of the classic mid-1960s UREI 1176, probably the most revered solid-state compressor/limiter of all. Engineers have been using 1176s along with LA-2As for decades; it’s a classic combination. Debates continue, however, about the order in which the units should appear in the signal chain, with some preferring to compress with the 2A then limit with the 76. There are no hard-and-fast rules.

With the vocal track already free from dramatic level peaks, I gave the track a squeeze through the Comp-2A in standard Compress mode so that the VU meter showed between 3 and 6dB of gain reduction. This produced an open, even sound while retaining some natural dynamics. Switching to limit mode gave a more obviously processed sound, emphasising intakes of breath and other mouth noises. However, the fixed response time ensured that transients were not sat upon. Heavy compression, with a fast attack time, can sometimes give singers a lisp – but there was no danger of that happening with this unit.

Next, I processed a bass-guitar track (Gibson EB through a Fender Bassman 50, mic’d with a Neumann U 47 FET) knowing that LA-2A-type compressors are well suited to bass-dynamic control. Experimenting with the HF control, I was able to dial in a good 10dB of gain reduction – in Limit mode – on the loudest peaks, resulting in an upfront, present tone. With a touch of mid-boost EQ added, the bass sounded deep and throaty, with a great ‘boom and click’ character, emphasising the attack of the plectrum striking the string.

Later, I used the unit on an acoustic- guitar track, simply recorded, with no EQ or dynamic control. Here, it was clear to hear the benefits of the Comp-2A’s valve power, especially in the upper registers. Swapping out the unit for the solid-state Comp-3A (using similar amounts of gain reduction), the differences in tone and character were immediately obvious, but not in a night-and-day way. The main difference was the valve unit’s lovely top-end response, adding a glossy sheen to the top end. The transistor-powered 3A sounded warmer in the low mids, but less airy and open up top.

There’s a myth within audio circles – both professional and domestic – that all valve equipment sounds warm. This test debunked that old chestnut, as the Comp-2A sounded sweeter than the gutsier Comp-3A in all side-by-side comparisons.

I wasn’t able to try the unit on a stereo mix buss – you would need two linked units for that – although I strongly suspect this would be another application for which the unit’s fixed two-stage release time is ideal. I did create a quick mono mix of a multi-mic’d drum kit, however, finding that while the Comp-2A added some coherence and ‘glue’ to the sound, no amount of heavy compression would produce the rhythmic pumping sound that often works so well on drum busses; other units with user-controllable response times are better for that type of effect.

For general signal levelling, though, this unit excels – especially on vocal and bass tracks, where incorrectly set response times can ruin the sound. The unit’s fit-and-forget nature is most welcome when a job needs to be done swiftly without having to worry about setting attack and release times and selecting the right ratio. The Comp-2A gets on with it, as only opto-compressors of this type can. It does all the hard work so you don’t have to. Highly recommended.

Warm Audio
WA-2A $899
Warm Audio’s WA-2A is another LA-2A copy, but retains the look and dimensions of the vintage units. It’s a pity the WA-2A’s pre-emphasis control (like the Comp-2A’s HF control) is hidden on the back panel.

GAP’s Comp-3A is similar to the 2A in almost every respect, apart from it being a solid-state, rather than valve-driven, design. It has a slightly thicker sound in the low mids compared to the more transparent and glossier-sounding valve unit.