Focusrite has earned a solid reputation since the company’s arrival in 1985. We’ve reviewed quite a few Focusrite audio interfaces over the years and they always manage to impress us in terms of sound quality and the competitive price point they always seem to be on sale at. The newer, red, Scarlett range has been […] 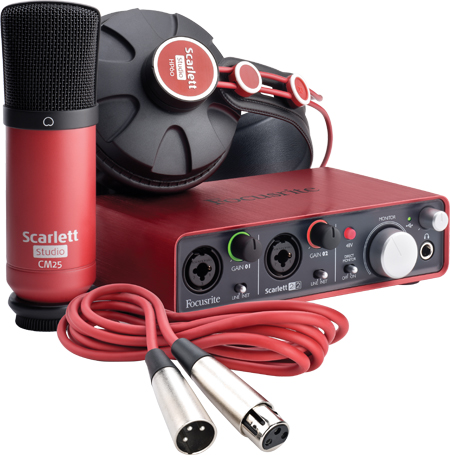 Focusrite has earned a solid reputation since the company’s arrival in 1985. We’ve reviewed quite a few Focusrite audio interfaces over the years and they always manage to impress us in terms of sound quality and the competitive price point they always seem to be on sale at. The newer, red, Scarlett range has been slowly expanding over the last year or so and this new bundle is the first package that’s aimed at being a complete recording solution.

When you’re starting out in music production it’s easy to make mistakes from the very beginning in terms of kit choice and cost – not to mention ease of use and installation. So we’re looking at the Scarlett Studio package here with the outlook of a complete newbie to see if it will be a good starting point for those new to tech.

Scarlett Studio is a bundle based around a 2i2 Scarlett audio interface, CM25 large-diaphragm condenser microphone and a pair of HP60 headphones. A three-metre mic lead is included, so asides from the necessary mic stand and pop shield for the most optimum use of the setup you do have pretty much all the hardware that you need right out of the box.

A lighter version of Cubase called Cubase LE 6 is included to take care of your recording and MIDI sequencing needs. If you’re looking to hook up any older five-pin MIDI gear you’ll be disappointed, though – the 2i2 interface doesn’t have any MIDI connectivity.

Cubase LE 6 is reasonably well featured with up to 16 audio tracks, 24 MIDI tracks and other limited but still useful tracks for FX, groups and insert slots on channels for further processing. Cubase is potentially one of the most difficult audio programs to get to grips with for newcomers, so a little limitation is good in this respect. Upgrades are available to more feature-heavy versions, but LE is perfectly fine for a beginner’s setup.

More software is included in the form of the Scarlett plug-ins suite. This covers compression, gating, EQ and reverb. So on top of the Cubase processing plug-ins, you’ve got quite a nice range to choose from. Novation’s Bass Station is also included, which although quite old is a good source for classic dance/electronic bass sounds. Loopmasters finishes of the package with a touch over 800MB of free sample material. This includes loops and single samples of instruments, drums and various other sounds such as SFX to help your production work. They cover jazz, dubstep, rock, techno and so on, so there’s a good amount of diversity, catering for the needs of many. Throughout our browsing the quality level of the sounds is also high so this isn’t just a throwaway element of the bundle, it’s genuinely going to be quite useful to you.

The 2i2 audio interface is a well featured entry-level unit. It includes two dual-purpose XLR/jack inputs and the input stage can be switched between line or instrument levels on both inputs independently.  Thankfully, this can now be done via a hardware switch on the unit itself. Earlier units in the Scarlett range were software control only, which can be a pain when you just want to plug-in and record without too much computer interaction.

Cubase LE 6 works fine with either one or two inputs at the same time so it’s easy to capture a jam with a friend or a vocal performance while you play an instrument. The Direct Monitor switch is handy here as it bypasses using monitoring inside your computer, which requires a certain amount of setup and tweaking. Monitoring levels for your speakers and headphones are independent so it’s easy to be the engineer recording someone else while they have their own level of music in their own set of headphones.

The fact that the 2i2 has a Kensington locking point on it makes it an attractive option for educational establishments as well. This should avoid the interface from going walkies from a workstation. The casing is quite solid as well so it should take a few bumps and knocks.

The CM25 microphone is exclusive to the Scarlett Studio bundle and is a little smaller than we usually see in the budget microphone market. It’s plug-and-play with no roll-off switch or pad, so your capturing technique needs to be adapted for the best results. For instance, we had to back off from the mic quite a bit to avoid plosives, though the addition of a pop shield soon remedies this. In our recordings the CM25 created a nicely detailed recording of vocals and acoustic guitar without too much of a sharp sound in the upper mids, a characteristic often heards in many of the cheaper mics. The quality of the mic should exceed the expectations of a novice and it will remain a useful piece of gear even when you’ve got an ear for better kit and start to upgrade. It’s certainly better than many of the more podcast-based budget solutions out there.

The HP60 headphones are classed by Focusrite to be studio-reference, meaning that they shouldn’t glorify the sound too much. We tried various genres on them and found the top and low extension to be quite impressive. They’re not by any means a neutral set of headphones for making high-end mix decisions on, but they are reasonably well balanced given the bundle cost. The most immediately noticeable thing about them is their weight and build. We found them to be incredibly comfortable to work with and this goes a long way when you’re working late into the night while trying not to disturb your neighbours.

For the cost that most people will pay for an entry-level interface or mic on its own, this bundle is a great starting package. What’s more, it will be easy enough to upgrade one item at a time as you progress.

Well-rounded selection of hardware and software

No bass roll-off on microphone

Requires a mic stand and pop shield to be truly complete

A great starting point for those who want the best quality they can get on a tight budget.