Two sets of monitors with two-way speakers, reflex-ported cabinets and 5-inch woofers. Huw Price spots the differences… Details Price F5 £199. C5 £149 Contact Hand in Hand 01752 696633 Web www.fluidaudio.net Fluid Audio is a relatively new company, but the man behind the firm’s range of studio monitors has been working in the field since he secured his […] 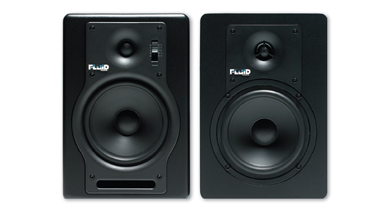 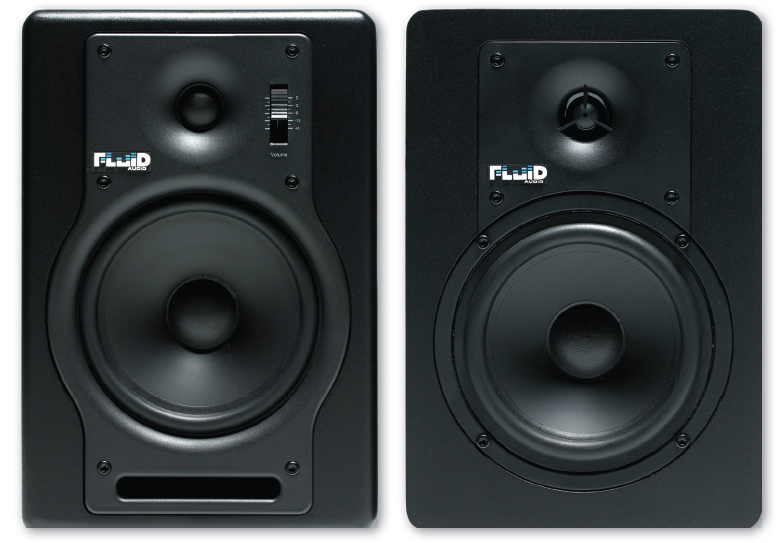 Fluid Audio is a relatively new company, but the man behind the firm’s range of studio monitors has been working in the field since he secured his first job with JBL in 1990. Much of Kevin Zuccaro’s early work with JBL and, from 1998, Cerwin-Vega, involved hi-fi and portable PA speakers, but following a move to M-Audio in 2005, all of his subsequent efforts have been focused firmly on powered studio monitors, culminating in the launching of Fluid Audio in 2011.

F5
The F5 is the heaviest-hitter of the two, having 70W of Class-A/B bi-amp power. The 5-inch woofer has a composite paper cone and the tweeter is a 1-inch treated silk dome with an integrated waveguide. The magnetically shielded enclosure features a front port slot located beneath the woofer and the front-mounted volume fader is a first for us. It’s indented at the -6dB mark, so that’s probably the default setting. 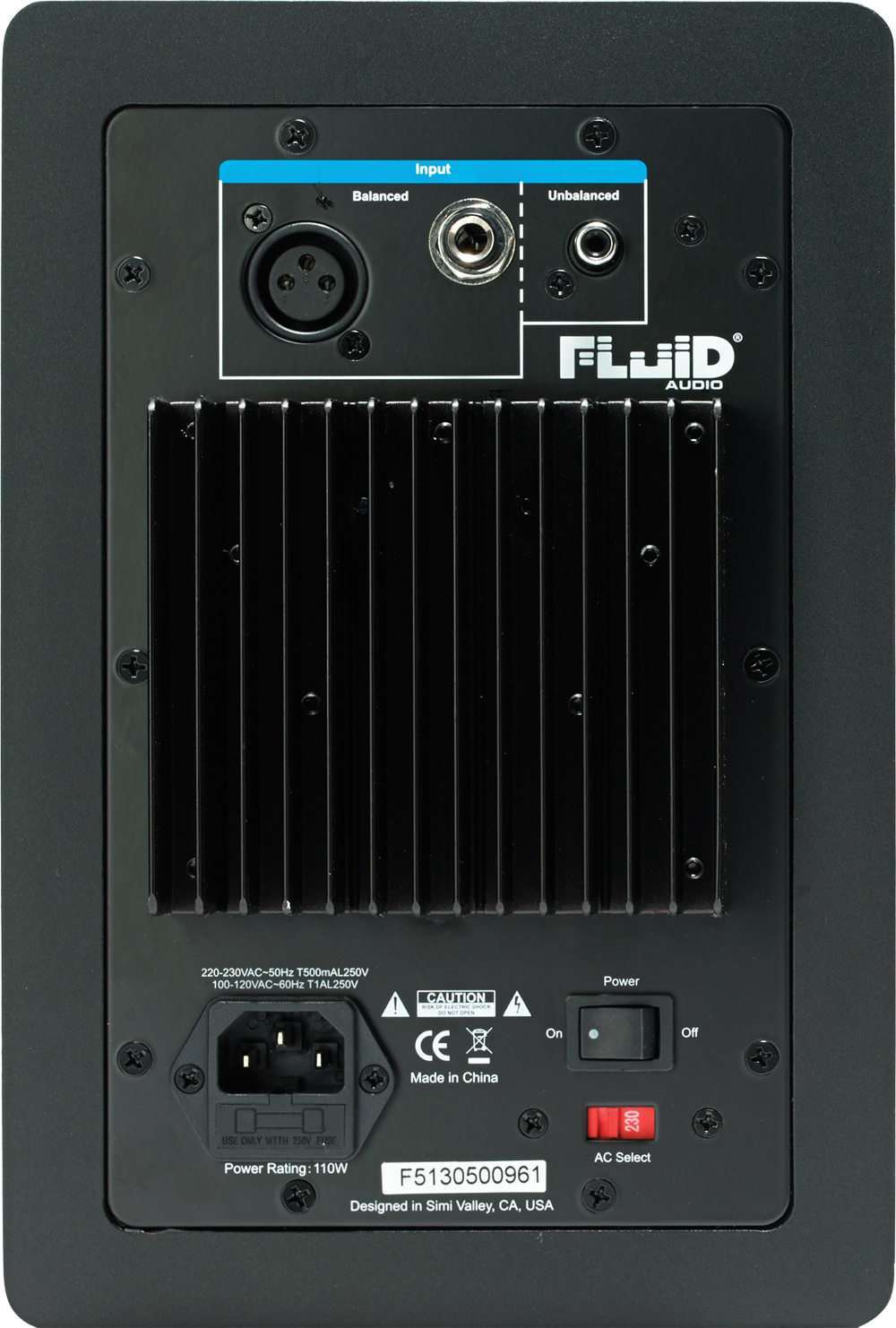 Connection options include balanced XLR and 1/4-inch jack plus unbalanced RCA/Phono. Models destined for the European market also have auto-standby, and it works superbly. US models don’t have this feature, presumably because global warming isn’t their problem [steady Huw! – Ed].

C5
With 20W of Class-A/B amplification the C5s are less powerful, but they also have 5-inch woofers with composite paper cones. The tweeter is 1-inch too, but the integrated waveguide and cover provides a different look because the tweeter is set further back. This is said to provide better time (phase) alignment between the woofer and tweeter.

Interestingly, the power amps are built-in to the left enclosure only and the right links up via a length of speaker cable – just like hi-fi speakers. The audio connections for the C5 and F5 are identical, but the C5 has a single stereo volume control, mounted just below the port on the rear of the cabinet. 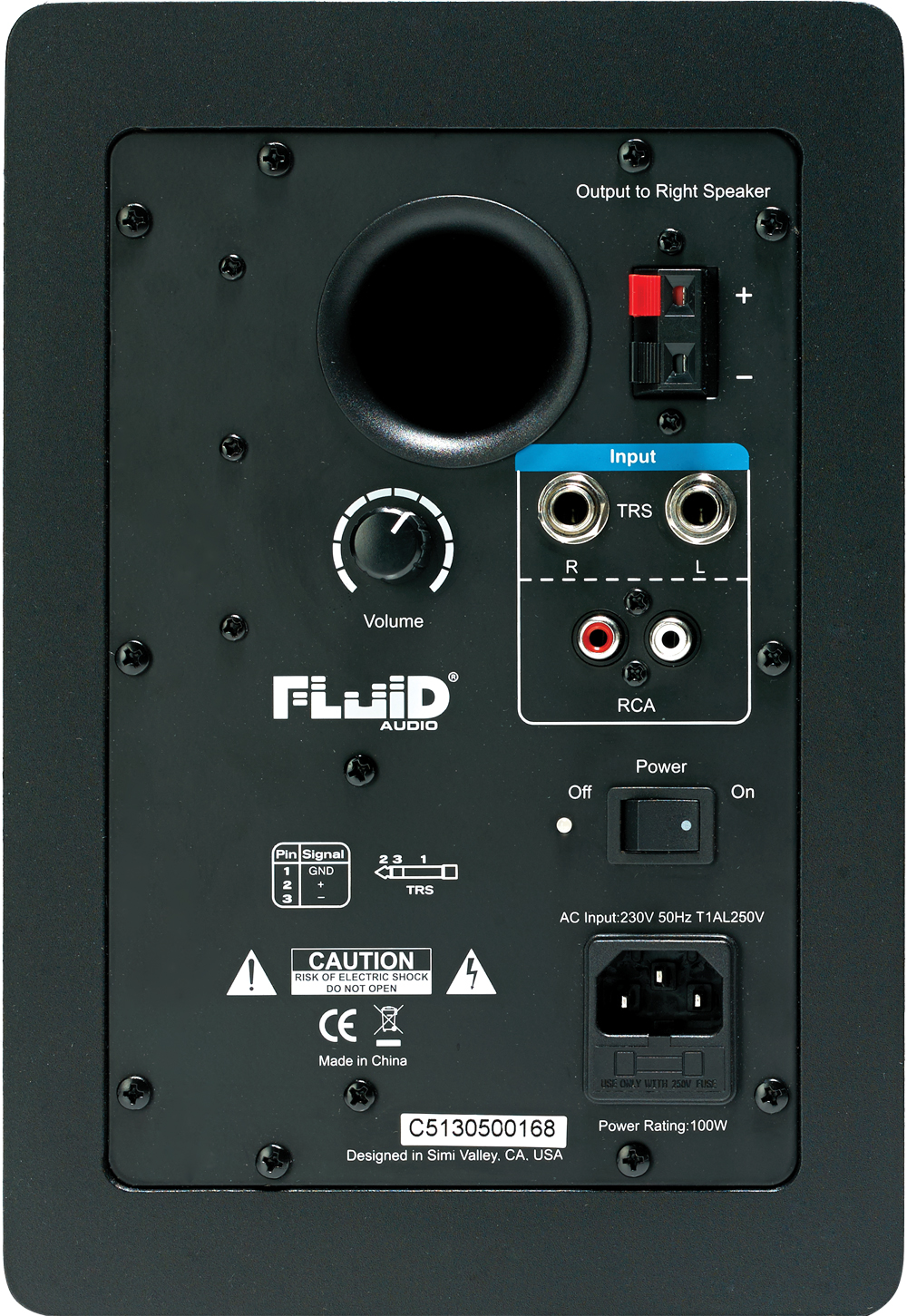 Audio connections for the C5 and F5 are identical but the C5 has a single stereo volume control, mounted just below the port

All Ears
First off, we should say that the F5s seem to benefit from a short warm-up period before they start sounding their best, but lots of analogue audio gear is like that. It’s subtle, but mix elements seem to gel better after a few minutes.

The onboard power is impressive for the cabinet size and price point, so there’s no shortage of volume. In fact, we found the F5s sounded better when they were being pushed harder. The bass response seems to fill out and drive tracks a little more.

The low frequencies do start to roll off quite noticeably below 50Hz or so. Even so, the F5 is certainly not bass-light given the size of the cabinet; happily, there’s also no port chuffing. And even better still, there’s no obvious sense of bass hype.

Everything sounded impressively open and transparent. Treble frequencies were airy and smooth, and the midrange was nicely detailed. Compared to similar-size monitors costing three times as much, the F5s don’t sound as refined and the imaging is not as crisp. Even so, we enjoyed working on them and balances transferred to other systems very nicely.

A fat, detailed and intimate midrange is the C5’s main strength. On the downside, the bass and low mids are a bit on the tubby side; nevertheless, it’s an enjoyable sound with otherwise impressive clarity and smooth treble. This full-bodied midrange actually seemed to bring out more ambience and artificial reverb to create a deeper and more roomy-sounding image than we experienced with the F5s. Having said that, the F5s were substantially clearer and any colouration was less obvious.

The price difference between these speakers is a mere £50, but they are vastly different in sonic character. They also offer very decent sound quality at this price point, but there is no equalisation adjustment. As much as we enjoyed the C5s, we’d feel more confident about recording and mixing through the F5s 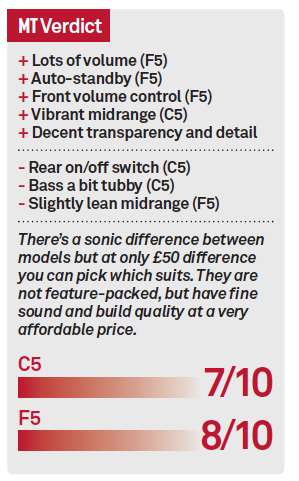