Multichannel interfacing can be expensive, but Ferrofish’s A16 MK-II demonstrates that it needn’t break the bank. Mark Cousins goes fishing…   Details Manufacturer Ferrofish Price £759 Distributor Synthax (www.synthax.co.uk) Contact 01727 821 870 Web www.ferrofish.de Amazon.co.uk Widgets Despite a large number of music professionals choosing to work ‘in the box’, there’s still a demand for […]

Multichannel interfacing can be expensive, but Ferrofish’s A16 MK-II demonstrates that it needn’t break the bank. Mark Cousins goes fishing…

Despite a large number of music professionals choosing to work ‘in the box’, there’s still a demand for multi-channel interfacing and conversion. A simple USB interface might be fine for basic audio activities, but if you intend to record a band live, or hook-up your DAW to a dedicated studio console, then you’ll need considerably more than just two-channels to play with! While a full-scale Pro Tools rig will be out of many musicians’ budgets, the combination of an audio interface (with MADI or ADAT connectivity) and a multi-channel AD/DA converter can be a surprisingly cost-effective solution.

Equipped with both ADAT and MADI connectivity, the Ferrofish A16 MK-II is a perfect example of a multichannel AD/DA converter that could augment itself onto an existing audio interface to significantly increase your I/O capacity. Coupled with an interface like RME’s MADIface USB, or Focusrite’s Liquid Saffire 56 if you’re using ADAT connectivity, the Ferrofish could form the basis of surprisingly versatile system, even running multiple devices (in the case of MADI) to provide up to 64 channels of I/O.

The Ferrofish A16 MK-II packs plenty of functionality into its single rack space, with 16 channels of analogue I/O on balanced TRS connectors, MADI ports, ADAT I/O, BNC Wordclock connectors and even MIDI for remote control. On the front panel of the A16 MK-II, the appearance is somewhat utilitarian, with two prominent TFT displays and three push-button controls to navigate the unit’s functions. Although it’s possible to access all functionality from the front panel, there’s an option to use the MIDI connection and accompanying editor software to control the unit remotely. At the time of writing, the editor only works on the PC platform.

For well under £1,000, it’s hard not to be impressed by the functionality of the unit. In theory, you can run the interface up to an impressively audiophile 192kHz, although there is a knock-on reduction in the channel count running over the ADAT or MADI. Gain controls on each channel provides a degree of trim, so as to balance line-level signals entering or leaving the unit – whether it’s to tame a particularly hot output on a synthesizer, for example, or to account for the headroom when routing through to a console’s tape returns. 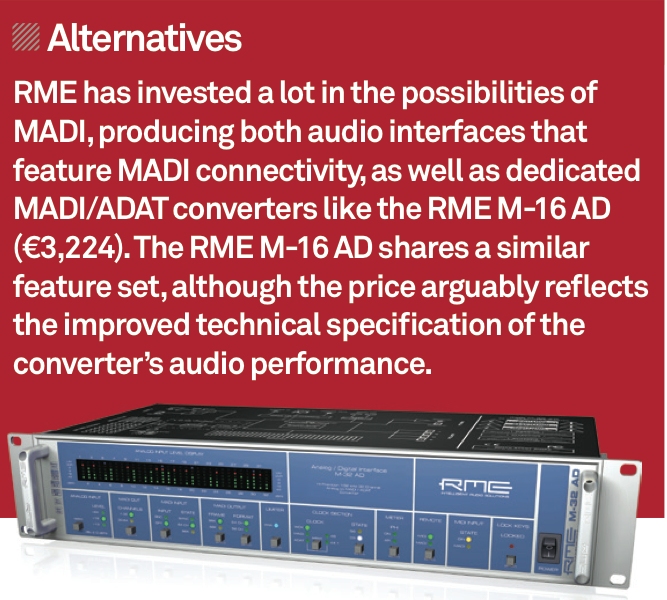 Overall, the two TFT screens provides a good instant snapshot of all 32 signal levels, with the input metering on one side and the output levels on another. As you’d expect, the routing is suitably flexible, enabling you to address the four different MADI streams, as well as being able to save and recall routing presets. Given the size of the display, though, and the use of just three function buttons, aspects like adjusting the gain can get slightly fiddly, so it’s a shame the remote control software is PC-only at the time of writing (see update below).

Although the A16 Mk II might lack some of the finesse of certain ‘mastering grade’ audiophile converters, it certainly offers a commendable studio performance with a clean and un-coloured sound. Ultimately, you’d need to spend a lot more money to improve on the quality of conversion on offer here, and for just £759, the Ferrofish’s sonic performance (given the channel count) is far beyond what many audio interfaces offer at this price point. MADI converters aren’t exactly cheap or plentiful, so Ferrofish have really plugged a hole in the market.

Despite MADI being a relatively niche part of the project studio, it’s pleasing to see companies like Ferrofish providing tools that are accessible to those on a restricted budget. Whether you’re expanding an existing setup with more analogue I/O, or building a new MADI-based rig from scratch, the A16 Mk II is a good alternative to more expensive solutions out there

Update 1st August: Software remote is now available for both Mac and PC 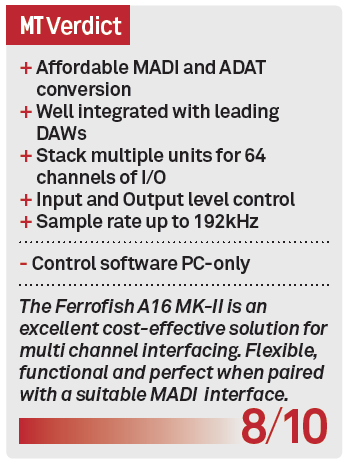