Faderfox’s latest Solid Control MIDI controller is a highly customisable, durable beast equally happy with life on the road or in the studio. Martin Delaney maps its many knobs… Details Manufacturer Faderfox Price €549 Contact www.faderfox.de System requirements PC or Mac with USB 1.0 or above. Or any USB hub Faderfox is best known for […] 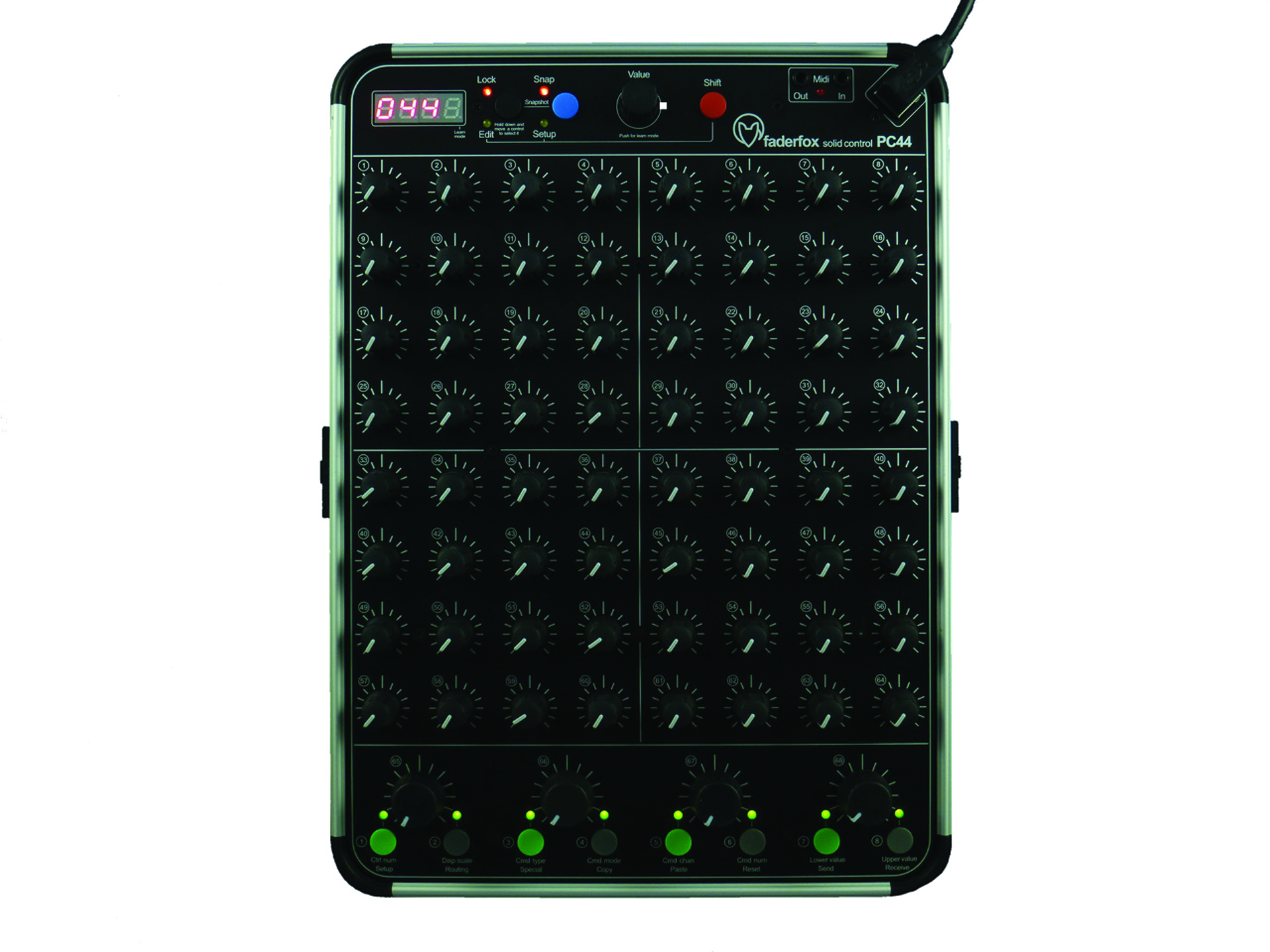 Faderfox’s latest Solid Control MIDI controller is a highly customisable, durable beast equally happy with life on the road or in the studio. Martin Delaney maps its many knobs…

Details
Manufacturer Faderfox
Price €549
Contact www.faderfox.de
System requirements PC or Mac with USB 1.0 or above. Or any USB hub

Faderfox is best known for its compact MIDI controllers, but it also has a collection of larger models – the Solid Control series – which include built-in cases, intended as a heavier duty, tour-ready option. I use the little Faderfox PC4 in my studio, so I was curious to try the latest Solid Control offering, the PC44. This is a USB MIDI controller with 64 small and four large knobs, a large push-encoder, 11 buttons, and a small LCD display. It can be powered by USB, or from the the wall if you want to use its mini-MIDI connections to communicate with hardware. All controls and connectors are on the top surface of the PC44, so when the lid’s snapped into place, everything’s covered and protected.

The PC44 is worthy of our attention for a few reasons; it’s nicely functional; it’s beautifully constructed; and (most importantly) – it’s got those knobs! It’s a true luxury to have so many parameter settings accessible and visible at once. Everybody loves high-tech controllers – touch surfaces, gesture-based devices, all of that good stuff – but sometimes, what we need is a tactile surface expanding on more traditional concepts. And if you’re still not satisfied, the PC44 has 64 presets, or ‘setups’, as they’re called; which should be enough.The package contains the PC44, a USB cable, a short mini-jack-MIDI adaptor cable, a CD containing PDF documentation, a printed manual, and a sheet of 98 little white labels to tag your PC44’s controls if necessary.

No mains power adaptor is included, because you can use any generic USB charger and we all have enough of those already.

Many controllers these days are conceived around the avoidance of MIDI mapping, with instant takeover of the DAW’s controls (Ableton’s Push is probably the ultimate example). But if you want a unique setup, a device like the PC44 is incredibly useful. The top panel is delineated with graphics that split the knob-array into 4×4 blocks, and I found that encouraged logical (and easy to remember) mapping arrangements. Despite not having a software editor or more detailed display, the PC44’s very customisable, being able to send notes, CCs, pitch bend, aftertouch and program changes, on any MIDI channel.

It’s necessary to master a few control combinations to get to the power-user stuff – for example, the LCD can be locked to the last-moved control, any number of pots can be assigned to ignore preset changes and retain their current assignments (I love that one), and settings can be be copied and pasted between controls. Settings (and firmware updates) can be archived and restored via sysex messages.

Having mentioned Ableton and Push, the PC44 might make an ideal add-on to a Live/Push rig. Push has eight multi-functional encoders, which work perfectly well; but sometimes, it’s preferable to see the status of many controls at the same time. For a recent live set, I used a Novation Launch Control and Launch Control XL together, to give me 40 knobs at once, for that very reason. With the PC44 and Live, it’s all about MIDI Map mode; the initial assignment process will take time, but it pays off. I mapped a couple of buttons to transport start and stop, and assigned knobs to eight channels of volume control, plus eight channels with six sends on each, leaving eight knobs spare for other assignments. In Setup 2, I mapped control assignments for the Operator synth – this is one of the few MIDI boxes with enough knobs to boss it around.

Sometimes, Live’s all about clips – but sometimes it requires deep tweaking, and the PC44 rules at that (I can imagine Reason users embracing this as well). Quitting Live, I went on to Remixvideo, a new VJ application from Mixvibes, which features a convenient Live-like MIDI learn mode. Having done so many performances as a Live user and as a VJ, I’d say that hardware control is even more critical for the visual artist, and the PC44 offers excellent control over movie-clip and effect parameters. 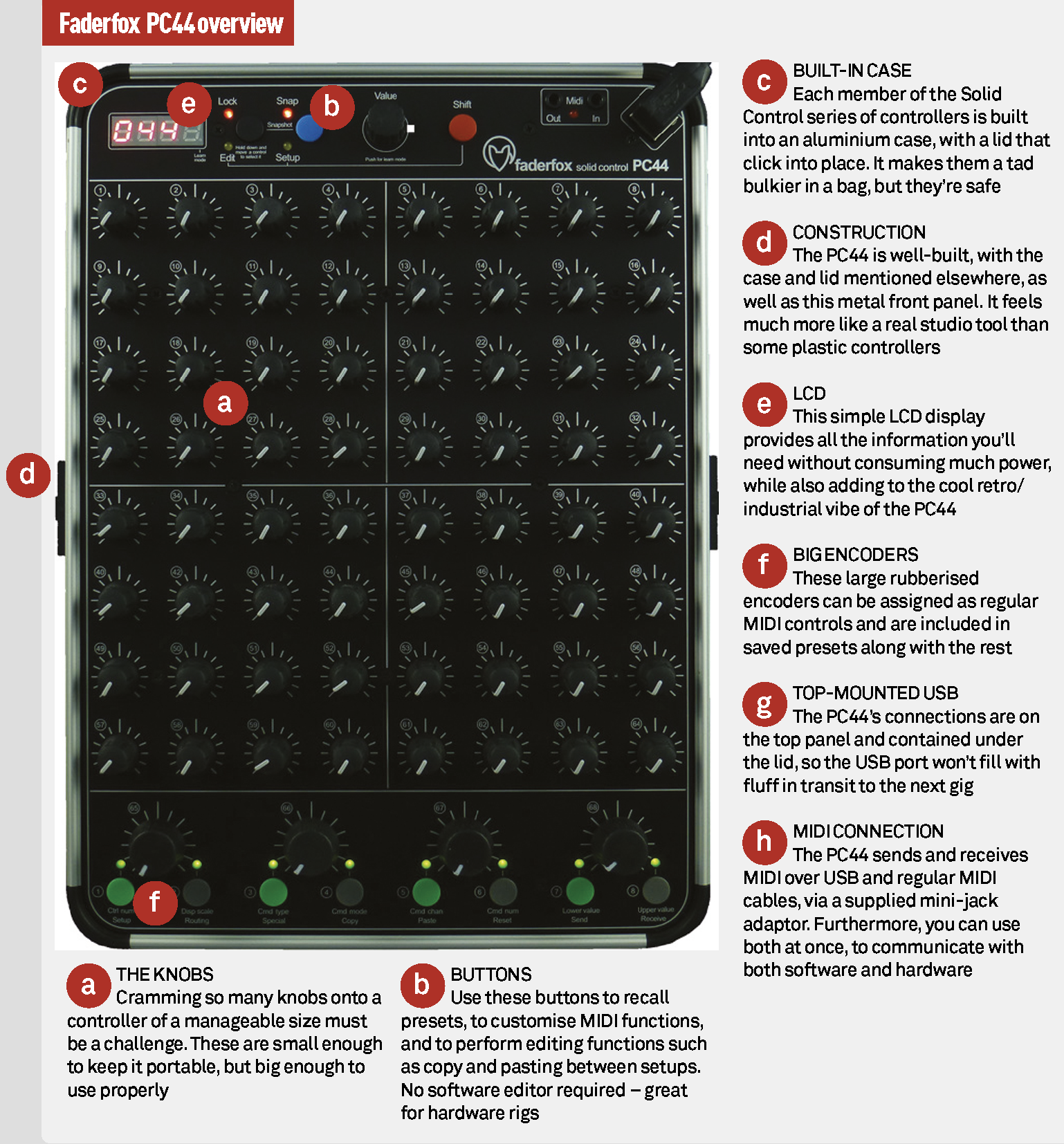 A) The knobs – Cramming so many knobs onto a controller of a manageable size must be a challenge. These are small enough to keep it portable, but big enough to use properly

B) Buttons – Use these buttons to recall presets, to customise MIDI functions, and to perform editing functions such as copy and pasting between setups. No software editor required – great for hardware rigs

C) Built-in case – Each member of the Solid Control series of controllers is built into an aluminium case, with a lid that click into place. It makes them a tad bulkier in a bag, but they’re safe

D) Construction – The PC44 is well-built, with the case and lid mentioned elsewhere, as well as this metal front panel. It feels much more like a real studio tool than some plastic controllers

E) LCD – This simple LCD display provides all the information you’ll need without consuming much power, while also adding to the cool retro/industrial vibe of the PC44 –

G) Top-mounted USB – The PC44’s connections are on the top panel and contained under the lid, so the USB port won’t fill with fluff in transit to the next gig

H) MIDI connection – The PC44 sends and receives MIDI over USB and regular MIDI cables, via a supplied mini-jack adaptor. Furthermore, you can use both at once, to communicate with both software and hardware

I disconnected the USB cable from the computer, and plugged the PC44 into mains power, then used the MIDI adaptor to connect to a couple of hardware synths. Some reading was required to find out which messages were necessary. Then it was a simple task to change the corresponding MIDI messages, channels and CCs on the PC44, on a per-control basis, by going into Edit mode, then pressing the black Edit button, moving the chosen control, and using buttons 2 to 8 and the encoder to select and assign the chosen messages, to select the appropriate MIDI CCs and channels, then save the new setup. For hybrid rigs, you can use the USB and mini-jack MIDI outputs at the same time. Globally it’s possible to reset the current, or all setups, and save setups individually or en masse as Sysex messages.

The PC44 is just a big surface with a ton of knobs – that’s fine by me. I can imagine keeping it on my desk, using it for music and video performances with software-only as well as hybrid hardware-software rigs. It doesn’t have the dancefloor pretty-light vibe of pad-based controllers, but that’s not what it’s about.

iPad
www.apple.com from £379
If you need versatile more than you need tactile, the iPad must always be on the list. Install your favourite control apps, connect wirelessly or cable it up, and you’re ready. Nice and portable, of course. I’d recommend skipping the iPad Mini and begin with the Air or Pro models.

Novation Launch Control XL
www.novationmusic.com £149
The XL boasts 24 knobs and eight faders, which is good, because sometimes we need faders as well. It’s not as burly as the PC44, but it works absolutely fine and is somewhat more affordable.