FabFilter Pro-L 2 Review – Push It To The Limit

Can FabFilter’s new and improved Pro-L 2 replace all the other limiters in your DAW? Mike Hillier turns up the gain to find out… Price £149 Contact FabFilter Pro-L 2 key features: Eight limiting algorithms True Peak 32x linear-phase oversampling Loudness metering Surround sound support Like so many of FabFilter’s other plug-ins, the original FabFilter […]

Can FabFilter’s new and improved Pro-L 2 replace all the other limiters in your DAW? Mike Hillier turns up the gain to find out… 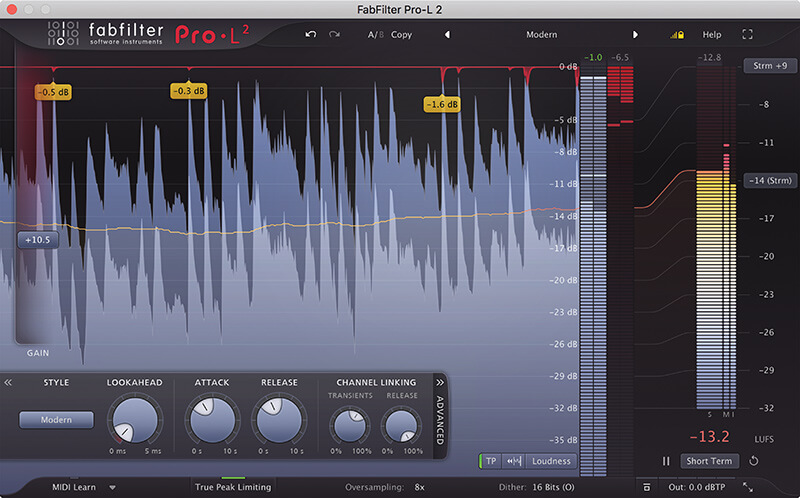 Like so many of FabFilter’s other plug-ins, the original FabFilter Pro-L limiter had become a staple of our mix and mastering sessions. Not only did the limiting algorithms each sound superb, but the graphical interface made using the Pro-L incredibly simple and enjoyable.

Like the Pro-Q and Pro-C before it however, FabFilter has now taken the time to re-evaluate Pro-L, updating the plug-in, and ensuring that it retains its place on our shortlist – but has it done enough to replace the competition and become our go-to limiter for all scenarios?

While heavy limiting during mastering has become less fashionable recently, forcing mastering engineers to work harder to get loud and punchy results without simply resorting to squashing the life out of a mix, a high-quality limiter is still an essential tool, both in mixing and mastering. But now, a limiter has to be able to deliver more than simple loudness.

FabFilter Pro-L 2 delivers this with a range of eight limiting algorithms, each designed with their own character, providing eight different flavours which can be applied to different program material. In addition, FabFilter has added a number of further features aimed at expanding the functionality of the plug-in, beyond simply making tracks louder.

When mastering we like to add the limiter to the last slot in our chain first, bringing the level up to what we feel to be right for the song before then applying any further processing. Applying FabFilter in this slot opens up another new option though.

By engaging the Unity Gain option you can listen to the effect the limiting is having on the material without any associated increase in level. While we have previously used MeterPlugs’ Perception for this task, having the option built into the limiter is far more convenient, and makes getting the perfect result faster
and smoother.

Of the eight algorithms in Pro-L 2, four are completely new; Modern, Safe, Aggressive and Bus. The new Modern algorithm has been designed to work as a good starting point all-rounder, and in our tests was remarkably transparent when applying typical amounts of limiting.

The Safe algorithm has been designed with zero-distortion as the goal, and is a great choice for acoustic, orchestral or jazz pieces, which typically don’t need to be as loud, but it doesn’t have the punch that is present with a touch of the Modern limiting.

The Aggressive algorithm pushes the punch even further, adding light clipping to the sound for a more in-your-face approach, which sounds great, so long as it isn’t pushed too hard. The Bus algorithm is the furthest from transparent, adding a fairly obvious colouration to the signal which isn’t always going to be appropriate for mastering, but is meant more for processing drums (either as a buss, or individual tracks), perhaps as a parallel, heavily squashed channel.

A tool for all tasks

We brought up a few different reference mixes that we’ve worked on over the last few months to compare the different algorithms in different scenarios. The first, an acoustic guitar, cello and voice arrangement would perhaps have benefitted from a little massaging into shape with a compressor before limiting.

There wasn’t a great deal of transient information, and so the limiter was acting more as an overall loudness processor. Engaging the unity gain setting enabled us to very quickly hear at what point the limiting began to distort with each of the algorithms, and while the Safe algorithm enabled greater loudness before distortion than the Modern algorithm, neither needed to be pushed that far to leave us in the loudness range we wanted for the track.

The overall loudness can be seen on the new loudness meters built into Pro-L 2, which include preset targets for different options. The CD preset of -9LUFS is perhaps a throwback to the loudness wars, and not something we’d ever target for anymore, but it is interesting as a reference. At this level the Modern algorithm was noticeably distorted. The voice was starting to grate, and the boomy bottom end of the cello was overpowering the musicality of the mix.

At the same level the Safe algorithm still sounded clear and the vocal retained its tone, without any breakup, but the bottom end was still overpowering. Perhaps a sign that some EQ was also needed. However, pulling both algorithms back to a more appropriate -14LUFS left the cello sounding more rounded, and less aggressively bottom-heavy.

Any EQ applied at this loudness would need to be more carefully applied. Comparing the two algorithms at this level however was difficult. Neither were really working hard, and the differences were much more subtle. 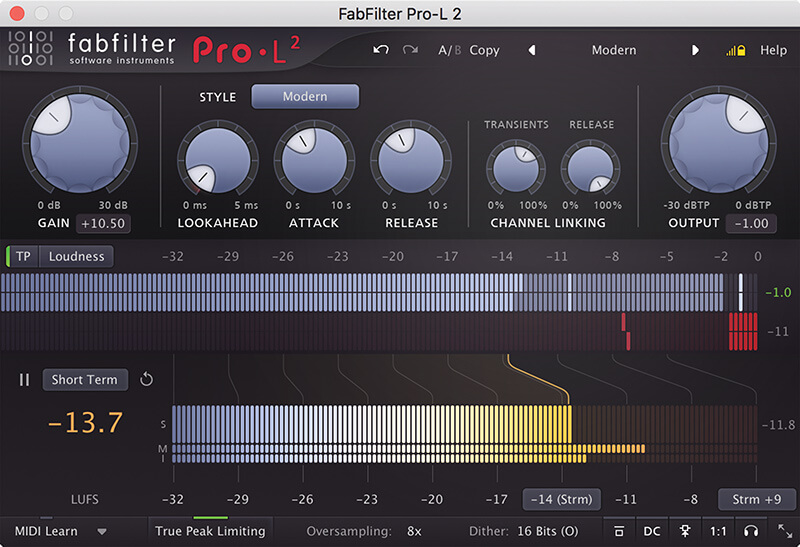 For mastering engineers and those working in post-production the Pro-L 2 is essentially a must-buy. For mix engineers the Pro-L 2 may be a little too big in scope to be a fundamental studio tool, but it still can have a role to perform: which it does exceptionally well. Just be careful not to take things too far and accidentally over-cook your mix buss when bouncing down a reference.

Having a range of algorithms for mastering is incredibly useful, and will allow mastering engineers to pick out the exact tone they want to achieve, even if the differences at modern loudness levels are incredibly subtle. However, the Pro-L 2 feature set doesn’t only cover mastering, there are several algorithms designed with mixing in mind. We brought up a recent metal/rock mix we’d been working on, and tried the Pro-L 2 on various busses.

Across our drums buss the Pro-L 2 we applied just a touch of the Bus algorithm. This algorithm has a little colour, and helped to push the drums through the already quite dense mix without lifting the level at all. We dialled the tone in with the Unity Gain mode engaged, ensuring we were using the limiter simply to improve the quality of the drums and not simply make everything louder.

Applied to the guitars in the mix we went for a much heavier, denser setting, again using the Bus algorithm, but this time we also dialled back the stereo linking. The Pro-L 2 provides separate control over the transients and the release of the limiter, so you could, should you wish, maintain stereo linking across transients while leaving the release to work in dual mono. This is a powerful feature and one that is going to require a lot of experimentation to find the best results.

For our guitars track there is no correlation between the left and right, so we opted for fully dual-mono with both the transient and release unlinked. The end result was very modern sounding, heavily limited guitars sitting inside an otherwise fairly dynamic mix. We got the density that the band had been clamouring for from the overly squashed reference mixes while maintaining an overall loudness dynamic much more in keeping with modern streaming media.

For stem mastering, Pro-L 2 has one last trick up its sleeve; external side-chain inputs. This feature lets you apply limiting to each stem individually, but as if it was being triggered by the full mix. The end result of this is that you can maintain each of your stems as separate files that when summed will add up to the same final master, rather than soloing each of the busses through the master limiter.

You can also now tune each limiter to the specific track, applying moderately different attack, release or even different algorithms to each track, but all the while still having the guitars duck slightly when the kick and snare trigger the limiter. Unfortunately, Pro Tools only has mono side-chains, which means it’s not quite possible to use this feature properly in Pro Tools, but other DAWs may well work fine.

FabFilter Pro-L 2 is an incredible achievement. It’s a clear improvement on a limiter we had already given full marks to, and as such easily deserves to be in your arsenal, whether for mixing or mastering. 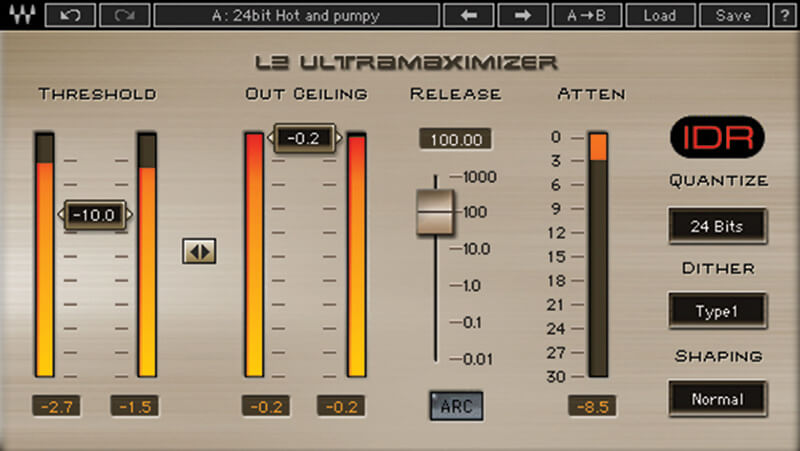 The Waves L2 is still the limiter to beat for many engineers. For many this is the plug-in that fuelled the loudness wars, but it is actually capable of some incredible results when not pushed hard, and remains remarkably clean even when pushed quite hard.

The UAD Precision has been our go-to mastering limiter for years, and still holds up well against the competition. However, it requires a UAD DSP system to run and doesn’t have the depth of functionality that is present in the FabFilter Pro-L 2.