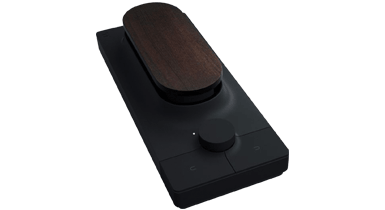 It’s all touchy/feely, but can the exciting new controller, Touché, add some much-needed expression to your music? Dave Gale swipes to find out…

Designers are always coming up with new ways for us to take control; either designing instruments from the ground up, like the Eigenharp, or redesigning the faithful music keyboard, as ROLI has with the Seaboard.

Yet for many keyboard diehards, all that’s required is an additional controller that might nestle next to old faithful, offering something more than a touchscreen, fader or a mod wheel. That’s where the Touché comes in.

Opening the box for the first time, you can immediately tell that this is a piece of quality equipment. Looking rather like a sustain pedal, with a large, rounded rectangular area sitting proud, the Touché looks and feels great, with a neoprene-esque finish to the base, and a nice piece of dark wood on top.

Towards the lower end of the unit, there are two large and flush-mounted buttons, with an infinite-pot style encoder in the middle. Upon removing it from the box, you’ll find it to be reassuringly heavy.Underneath the unit are more goodies – MIDI breakout cables and possibly the most expensive braided-USB cable I’ve seen… Quality assured.

The Touché is essentially a controller, a bit like an X-Y controller, with operation happening through the ‘touch’ of the upper surface. If you think of the ‘plank of wood balancing on a football’ scenario, you’ll not be a million miles away from how this works and feels.

The top, bottom, left and right areas tilt, lean and depress, with each having a MIDI controller or CV assigned, meaning you can assign whatever MIDI CC you want to an area, and as you apply pressure in that area, it will send out a CC or CV level. But as I would quickly find out, there’s more to it that that.

Once connected and installed, the way to get at the workings of the Touché is via the Lié plug-in. This does everything you wish it to do in terms of setting up controllers, whether MIDI CC or CV based. Once Lié is active, as a software instrument in a DAW, it’s immediately playable as an instrument in its own right, thanks to some healthy and wonderful sounds from soft-synth experts UVI – and these included patches are there to show off what can be achieved. 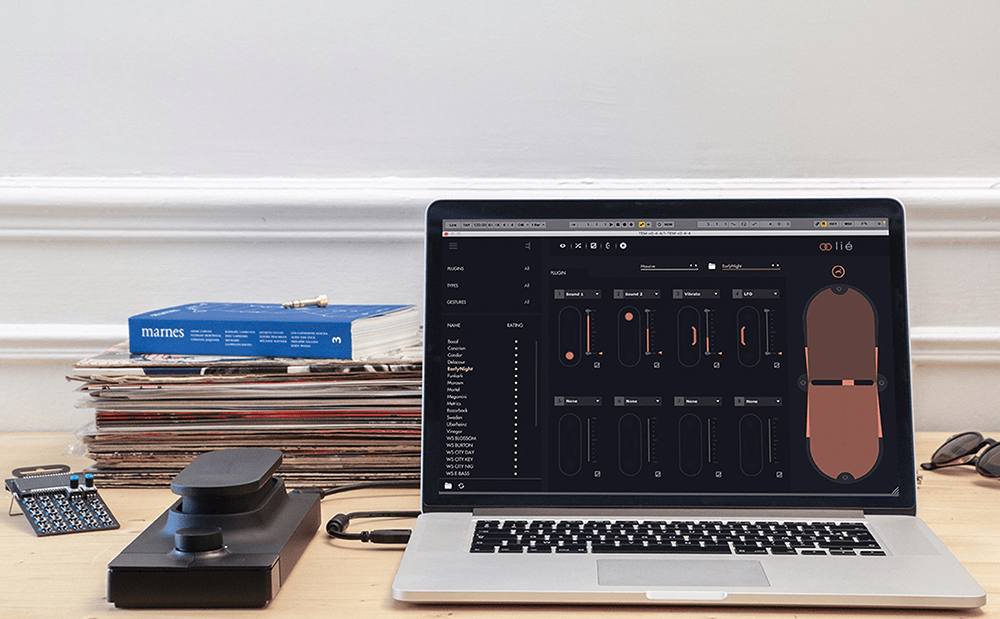 There are plenty of filter-based swells and far more besides, but the Lié software also allows operation of VST plug-ins from within it. Cute… however, this will present a problem if you’re a Logic user, as you will need a VST Wrapper for VST based plug-ins if you want to see and use any this way. Initially, this left me scratching my head for a while, until I realised it’s of course possible to set up the Touché to send any MIDI CC to a current track.

Within minutes I was controlling some of my favoured Audio Unit-based synths with the Touché. In my first flight of Touché exuberance, I found myself playing the keyboard and moving my finger across the Touché at every turn. It’s got a lovely feel you don’t get with touchscreens. The ability to tap it, softly or with a harsher feel, makes for a great on/off experience.

Because I spend a lot of time working with orchestral samples in Kontakt, I had hopes that this might be a nice way of working. My norm is to control both dynamics and vibrato, with a two-fader movement on a control surface – and the idea of replacing this with the Touché is appealing. I found it quite tricky to control both elements simultaneously, and with the centred return, found that this level of usage was going to take a little more practice.

For me, this device will really thrive in the live environment. It’s classy, easy to use (once you’ve got your head around it) and is a true ‘set and forget’-style device, until you need it to do something different, at which point, the included software is helpful. 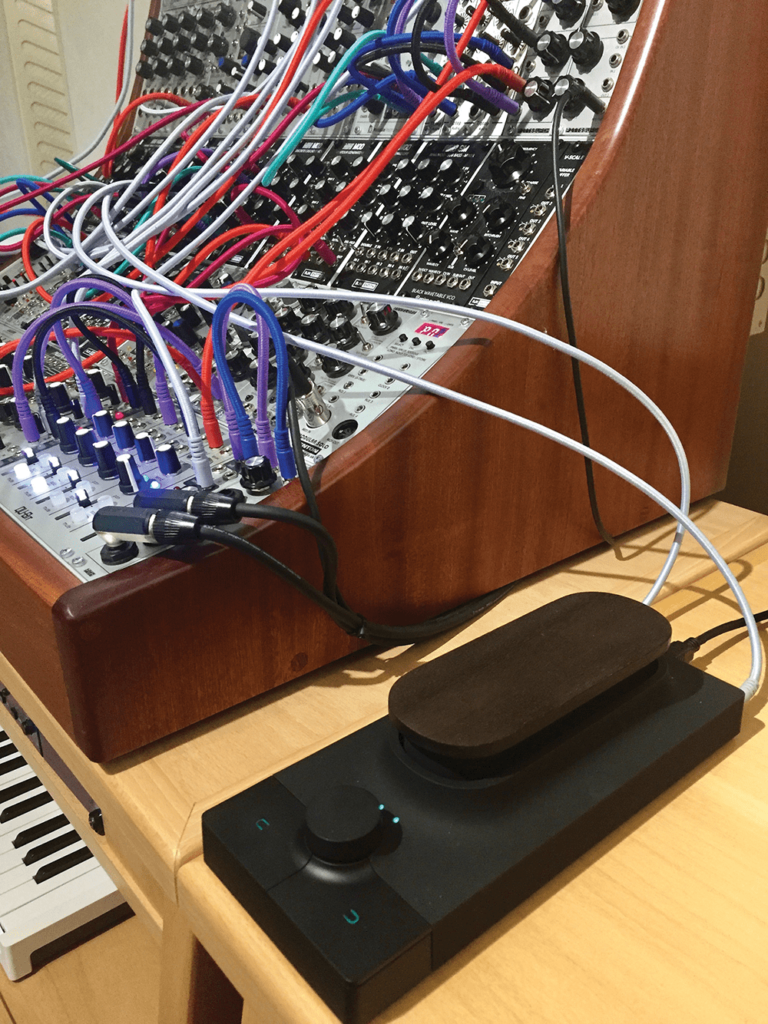 As a controller to reside at home as part of your DAW-based setup, I’m less sure, purely because it largely depends on what you want to do. There are plenty of other hardware DAW controllers out there, with faders, pads, transport control, etc.

So it’ll be up to you to dice up exactly what you want to do, and make your decision accordingly. However, as a real-time MIDI CC- or CV- based control interface, it’s very nice to use and very flexible with it.

The ins and outs

Apart from the USB connection used thus far, the Touché is also equipped with both MIDI In and Out (via breakout cables) and four independent CV outputs, which correspond to the four tilting areas of the upper surface. Once the MIDI CCs have been assigned in the Lié plug-in, you can detach the Touché from your computer and use it as a standalone controller, connected to a hardware synth.

Helpfully, Expressive E has listed many popular current and recent hardware synths, and picking one will immediately invite control in standalone mode – although you will still have to keep the USB cable connected for power (I used an old phone charger pretty successfully).

Exploring the CV outputs, I had these plugged up to my modular in no time. This, in many respects, was easier than setting it up via the Mac, and just gave me a great control, which I can see being very popular for both modular usage and live playing.

Many Eurorack modules can be a little small and fiddly, and having this unit as a CV-based controller is going to be a real boon to modular folk, or anyone who has a synth they’d like some desktop control for.

Away from the computer, the two buttons located at the bottom of the unit will allow for access of onboard memories. There are six banks of four memories available, with the left/right buttons accessing these sequentially. The encoder, in default mode, is used to adjust sensitivity, which I found particularly useful when in actual use, as it enables quick-and-easy attenuation.

It’s also easy to see how this device might be used in more exploratory and inventive ways, through software such as Max. Using it with my Moog Voyager, it kind of just mirrors the sort of things that you can already do with the X-Y touchpad; so for any analogue-style synth that does not have this facility, you can immediately see how the Touché could become deployed.

This will fit well with performers who want a nice control device that has live credentials. You won’t know if you really need it until you use it. But what I’m certain of is that, as a performance device with both computer and modular, it’s a great bit of kit and will look stylish in any setup.