It’s refreshing to see that in this predominantly digital age, many young – and not so young – designers are still embracing analogue technology with a nod towards classic designs from pro-audio’s illustrious past. One such designer is Liam Cartec, a man who is clearly passionate about quality analogue audio design, re-creating some legendary pieces […]

It’s refreshing to see that in this predominantly digital age, many young – and not so young – designers are still embracing analogue technology with a nod towards classic designs from pro-audio’s illustrious past. One such designer is Liam Cartec, a man who is clearly passionate about quality analogue audio design, re-creating some legendary pieces of kit while coming up with some interesting and imaginative ideas of his own.
,/soan

The EQ Pre-2A is essentially a discrete op-amp-equipped stereo microphone and line preamplifier that incorporates two channels of EQ based on the highly revered Pultec EQP-1A. Cartec also produces a faithful replica of that iconic mono valve equalizer, which we reviewed favourably last year. However, the dual EQ section of this new unit does not make use of valves: it’s powered by op-amps, as were the later Pultec units. The workings of the EQP-1A filters have been explained at length in these pages before, but for the uninitiated, here’s a quick recap.

The low end operates as a shelving EQ, with four selectable frequencies at 20Hz, 30Hz, 60Hz and 100Hz, and separate Boost and Attenuation controls. These controls were originally on rotary pots, but the EQ Pre-2A makes use of rotary switches throughout to enable precise stereo settings and easy recall. Aficionados of this design will be aware of the ‘low-end trick’ that can be performed by simultaneously boosting and cutting at one of the low frequencies. This creates a midrange droop by boosting the low end while carving out some low-mids; using this technique at 60Hz can sound really good on bass drums. The high-end section has eight selectable frequency bands between 3kHz and 20kHz, functioning  as a  boost-peaking EQ in conjunction with the Bandwidth control switch and a shelving EQ when attenuating. Of course, this EQ can be used both while recording and as an outboard EQ when mixing. 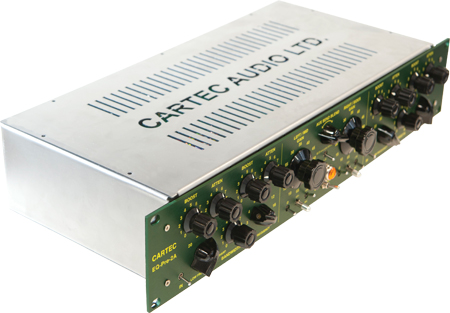 The microphone/line preamplifiers feature two large stepped switches to control input gain, which is available in 5dB steps up to a maximum of 65dB, and there are simple toggle switches for mic/line selection and polarity. Another toggle switch activates 48V phantom power. The power switch is conveniently located on the front panel, underneath the LED that illuminates when the unit is switched on. Above this is an interesting feature not usually found on mic preamps. Centrally placed at the top of the front panel is a rotary control – the only knob that is not a stepped switch – labelled Aux Send Blend, which can be used in several ways. For example, a blend of two microphones – say, a double-mic’ed guitar amp or top and bottom snare – can be created within the unit; or, by panning hard left or right, two different mics can be auditioned to ascertain which is better for the job in hand.

The pot can also be used when the switch below it is used in mid/side encoding/decoding mode. This function is to simplify the mid/side (M/S) stereo recording  technique. Although it’s been around since the early 30s, the M/S stereo method is seldom mentioned these days, despite having some advantages over standard X/Y stereo recording techniques, so here’s a brief explanation of how it works.

Two mics are required – the first is usually a cardioid, while the second must be a figure-8 design. The first mic – the mid – is placed above and very close to the second figure-8 side mic, which is positioned 90 degrees off-axis from the sound source. The mid mic captures the direct sound source in mono, while the side mic captures the left/right ambient room sound. Normally when this technique is performed, the output from the side mic would be split to a second channel with inverted polarity and panned hard left and right to create the stereo picture. The width of the stereo image can then be altered by adjusting the balance between the direct mid-mic channel and the stereo side-mic channels. A benefit of this method of stereo recording is that it provides a phase-coherent stereo image that can be increased or reduced after the initial recording. And if the recording is collapsed to mono, the signals from the side mic effectively cancel each other out, leaving a stable single-channel image.

With the M/S encoding on the EQ Pre-2A , the signal-splitting and phase-reversal of the side mic is performed within the unit. Therefore, with the direct mid-mic connected to the Left/Mid channel of the preamp and the side figure-8 mic connected to the Right/Sides channel, the stereo width can be adjusted via the input gain controls (increasing the level of the Right/Sides channel creates a wider stereo image). Each channel can then be treated to its own EQ, applying some low-end weight to the mid-mic while adding a top-end sheen to the sides, for example. The Aux Send Blend control can be used to send any part of the mid/side signal to another processor – such as a compressor or reverb unit – via the aux output on the rear panel. Incidentally, this output is transformer-balanced and operates passively.

Unlike digital plug-in devices, analogue units – and this applies to microphones as well – tend to possess a unique sonic character that is identifiable even in side-by-side comparisons of seemingly identical models. Character, in pro-audio circles, can be something of a thorny subject: one engineer might praise a unit for its transparency while another will simply find it bland. Some will love a unit because it sounds great while others will suggest that it shouldn’t sound of anything at all. Well, the Cartec is one of those units that sounds great. Sure, the mic preamp might not be the most neutral device we’ve heard, but it has a sonic signature that is utterly seductive.

We compared the preamp section of the EQ Pre-2A with our reference Thermionic Culture Earlybird mic preamp. It was immediately clear that the all-valve Earlybird possesses a more full-range sound with a huge bottom-end response, extended highs with plenty of air, and a glorious hear-through quality to the  midrange. However, the Cartec took hold of every signal we passed through it and added its own distinctive character that seemed to flatter the sound in a very musically pleasing way. Solo voice is a powerful tool when it comes to evaluating the performance of audio equipment as we are all so familiar with how it naturally sounds. With the valve mic pre, spoken word sounded very convincing through an AKG 414, although a degree of low-end rumble was evident until we made use of a high-pass filter. The Cartec chose to ignore the subsonic mush, even without any filtering, and produced an extremely rich and rounded tone that reminded us of the type of sound you hear in a BBC Radio 4 broadcast.

But don’t be led into thinking that the EQ Pre-2A under-performs at frequency extremes, it doesn’t; it’s just that the broad midrange has such a wonderfully robust yet fruity character – bringing out the best in vocals and electronic instruments – that the ear is inescapably drawn to it.

As firm fans of the EQP-1A EQ curves, we pitched the review unit’s EQ section up against our Pultec clone, the TubeTech PE 1B, using identical settings on a variety of sources. The results were surprising. While there’s no doubt that the Cartec behaves as an EQP-1A design should, it sounded smoother than our valve unit. In fact, we felt that if the two were blind-tested together and a group of engineers was asked to identify the valve model, many would pick the Cartec. Only when boosting heavily at 16kHz did we detect a fizz to the sound that was absent from the tube EQ.

Overall, we were very impressed by the EQ Pre-2A, both for its characterful sound and its versatility. The 2U box is nicely laid-out with firm, chunky rotary switches that feel very purposeful in operation. Those seeking transparent neutrality might want to look elsewhere, but if you want a great-sounding dual-channel mic pre with legendary EQ capabilities, microphone blending options and stereo enhancement facilities, look no further.

A great-sounding mic preamp with bags of character and two channels of legendary EQ. A wonderful recording and mixing tool that will leave its mark on many modern productions.

Here’s a vid from Cartec Audio: