Elysia’s xfilter 500 true stereo EQ has lofty ambitions. Mike Hillier finds it a space in his rack. Details Price £732 Contact – Unity Audio – 01799 520786 Web  www.elysia.com Amazon.co.uk Widgets Having designed one of the most impressive compressors we’ve come across (the Elysia Alpha), Elysia has slowly expanded and now offers a variety of […] 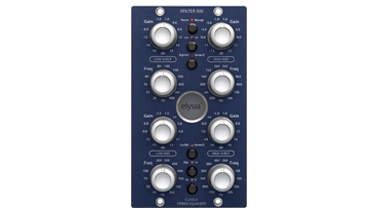 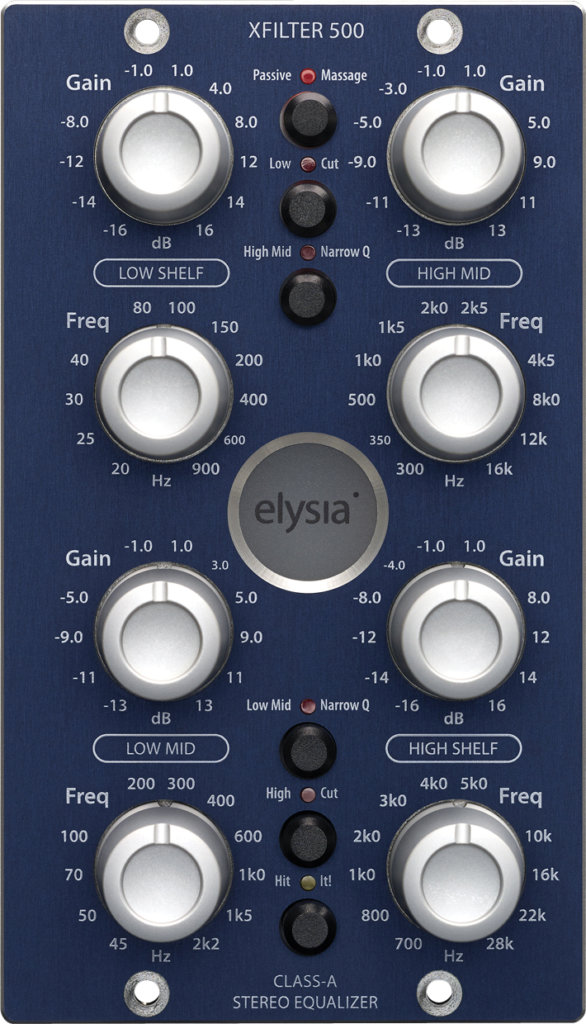 Having designed one of the most impressive compressors we’ve come across (the Elysia Alpha), Elysia has slowly expanded and now offers a variety of interesting signal processors. The xfilter 500 is the 500-Series version of the company’s stereo xfilter EQ, a Class-A EQ with high- and low-shelving filters that can be switched into low- and high-pass filters with resonance, plus two mid-peaking filters with switchable wide- or narrow-band Q. Additionally, the Elysia xfilter 500 has a Passive Massage switch that, when engaged, adds a fixed LC (inductor-capacitor) filter network to the signal path, which, according to the manual, lifts the top end around 12kHz and cuts around 17kHz to open it up.

Buss Business
The xfilter is a two-space 500-Series module, enabling it to grab audio from two channels and process them simultaneously. Each of the four EQ bands effects both channels identically (ideal for stereo processing), but this does mean that unlike some other stereo EQs, the xfilter cannot be used as a dual-mono processor or in an M/S configuration. You can still process mono signals with it, using only one channel of the EQ, but only one signal at a time (unless the unlikely situation arises when you want to process two separate mono signals identically).

Given its stereo nature, we decided to start testing with the xfilter placed across the mix buss of a rock mix. For this role we usually prefer a broad EQ to subtly shape contours of the mix, leaving more detailed EQ’ing to the individual channel EQs – quite different from mastering, when a very narrow EQ cut can be incredibly useful.

We started by engaging the Passive Massage feature, switching it in and out to reveal a subtle lift in the top end. On our rock mix this brought out air around the vocals, helping them to rise above the rest of the mix; however, it also brought out a slight harshness in the cymbals, which wasn’t to our liking for this particular mix. This effect might work wonders on other sounds, such as guitars or piano – or even other drum kits – but for our mix it just wasn’t right.

Switching to the high-shelf, we applied a similar small boost around 12kHz, which seemed to bring out even more of the cymbals. Again, this might have worked well on the solo’ed vocal, but on the whole mix it wasn’t producing the results we wanted. Sweeping up, though, we were able to get a great air around the vocals without also boosting any harshness in the cymbals; this required a slightly larger boost, with the shelf set to its top frequency around 28kHz. This lifts beyond the hearing range, but with a large boost the shelf starts much lower and has a more subtle effect in the audible range. In our experience, only a few EQs can pull off this trick well, and the xfilter is one of them. 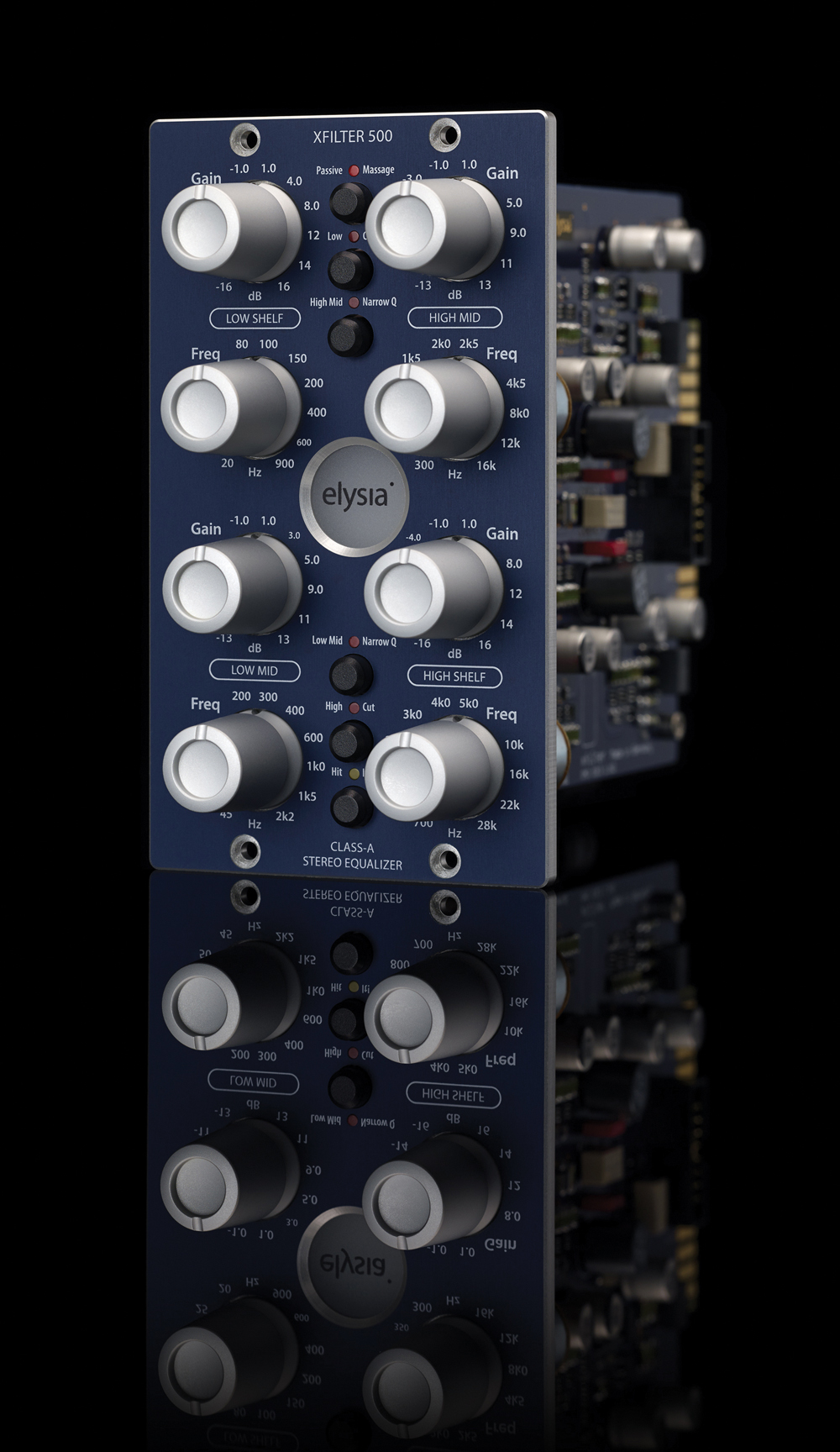 Switching our attention to the low end, we wanted to bring up the sub-harmonic thump of the kick a little to really get air moving in front of the speakers. Using the low-shelf set to around 50Hz, we were able to bring out the area we wanted very quickly, but this really reduced the headroom in our mix. By switching the low-shelf to a high-pass filter we could reduce the amount of sub-harmonic energy while simultaneously boosting the subs around the cut-off point thanks to the resonance of the filter. 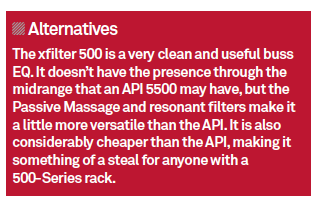 Sweeping around the bottom region, we were able to bring up this movement around 35Hz without as much loss of headroom. Without the resonance in the filter we wouldn’t have been able to do this, but it does make the filter less useful if you simply want a clean low-end roll-off. Once we’d brought out the sub, we were able to further shape the low end of the mix with the low-mid band, subtly pulling down the mix at around 350Hz to tighten up the bottom end and provide room for the mids to breathe.

Versatile Performer
The xfilter is a fantastic and versatile tool that we would happily give a place to on our stereo mix buss. However, it isn’t limited to this role and performed fantastically on just about every sound we put through it. Guitars in particular really benefit from the Passive Massage feature, and while we usually like something more aggressive on the guitar buss, the Elysia got us to the sound we wanted so quickly it would be foolish to ignore it for this role too. 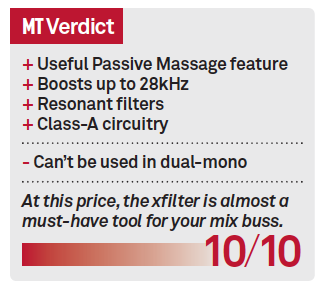 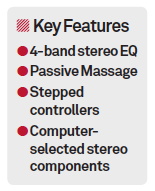