With more performance features than a circus, Analog Keys is aimed at everyone from live players to analogue boffins. But does it spread itself too thinly? Andy Jones is on the keys… Details Price – £1,449 Contact – Elektron +46 317 437 440 Web – www.elektron.se We love Elektron – let’s get that out of the […] 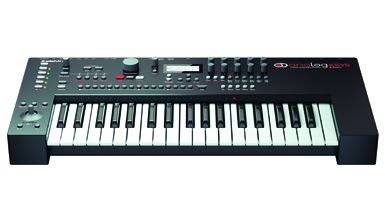 With more performance features than a circus, Analog Keys is aimed at everyone from live players to analogue boffins. But does it spread itself too thinly? Andy Jones is on the keys… 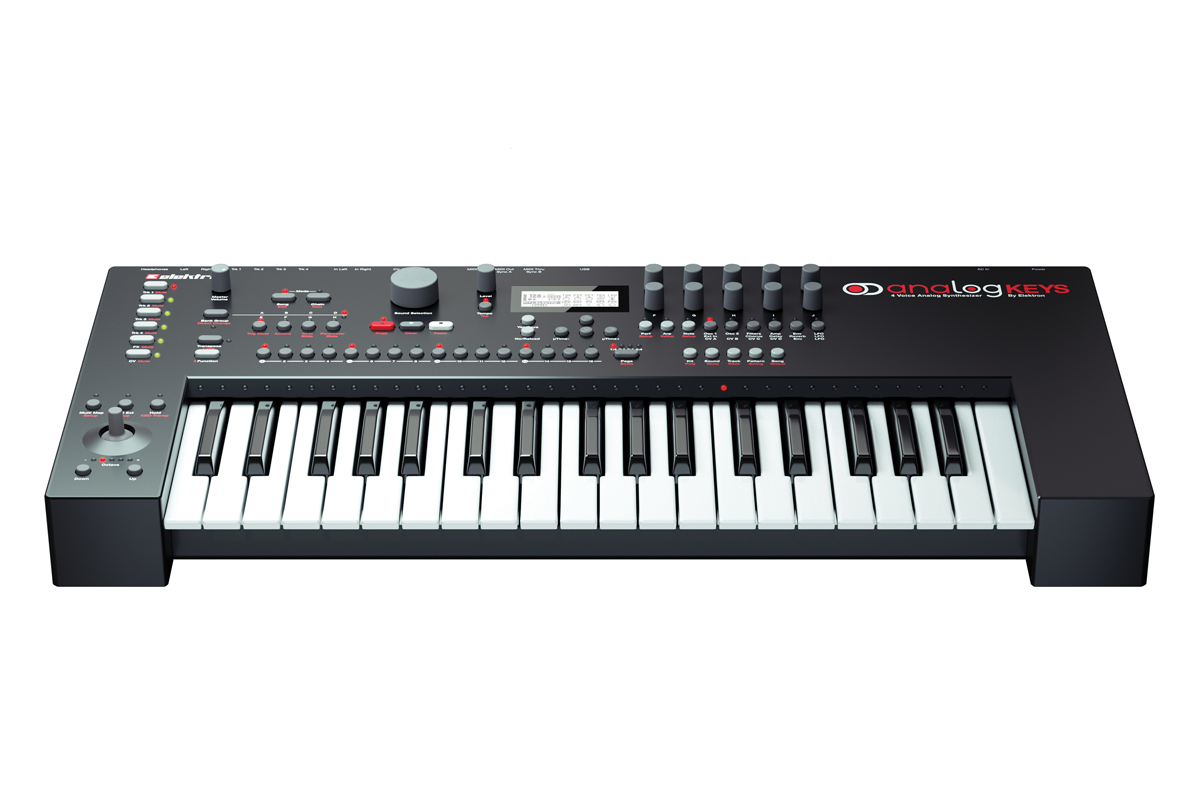 We love Elektron – let’s get that out of the way. The company does things its way and doesn’t really seem to care what anyone thinks. It produces great hardware beat and synth machines which are, as Stella Artois would say, reassuringly expensive. ‘Too expensive?’ you might say, but I’m a firm believer that every industry needs something that you can aspire to buy. Not that Elektron is in the ‘supercar’ league where no-one can afford the gear, but it is set in a strata where you have to be serious about what you are doing in order to consider buying it, which means – in an admittedly snobby way – ‘no riff-raff here’, so consequently you won’t find Elektron sounds everywhere.

Having said that, the gear really does have to deliver the goods for the money being asked for it, and in the Machinedrum, the Monomachine, the Analog Four (on which this unit is based, and reviewed back in April 2013 – indeed for more on this synth’s architecture read that review) and the Octatrack, it’s a case of ‘so far, so great’. They do what you want and a whole lot more, but they do cost…

Analog Keys is a four-part analogue synth with digital control, effects, a step sequencer, a 37-note semi-weighted keyboard, MIDI control capabilities plus some neat sound-morphing by way of a joystick. In fact, it is filled with features for the composer and performer but, more interestingly for the studio user, is its forthcoming Overbridge feature.

This will enable the synth to be seen as a virtual synth within your DAW, thus offering the best in hardware combined with the ease of use of a software instrument. It will be one of the first analogue synths to be able to sit within a DAW environment like this, but note that I have said ‘will’ twice as, unfortunately, this promised feature will not be with us until Q4 this year. When it does come out, though, it will also bring full, bi-directional USB audio and total recall of the analogue parameters. Great stuff, but as I write this we’re only just in Q2, so we have a while to wait…

Front panel
Because this analogue synth is digitally controllable and comes packed with features that you won’t find on a standard analogue synth, don’t expect a standard front panel. There are rotaries (10, far right) for controlling parameters, for sure, but they can control multiple parameters. The panel is set up with an emphasis on the on-board sequencer with its four selectable tracks on the far left (plus effect and CV/gate tracks) and 16 trigger buttons in a row along the bottom near the keyboard. The keys above are used to select patterns or sounds from potentially 4,000+ on offer.

Architecture
The manual, then, goes straight into the data architecture of the synth so it’s worth a quick run down of how it works.

You start with the basic sound, and four of these make a Kit (including effects and CV settings). A Pattern is a sequence of note data as you might expect and you can have 128 of these available across eight banks (16 in each). A Chain – stay with us – is a sequence of patterns; 64 of these are available which then go to build up Songs. Finally a Project is the whole thing including up to 128 Patterns and Kits; 16 songs, four Global settings and the 128 sounds in the sound pool. If this all sounds over the top, maybe it is, but when was Elektron ever going to do anything by the book?

For now, just get your head around the fact that there are tons of building blocks here for song creation and for getting ideas down. Sounds combine with Kits (effectively multi set-ups) to make Patterns to make Songs and Projects may contain multiple ideas and Songs (up to 16). It’s just a different way of thinking for the traditional DAW user – basically you can do everything you need to do within one box, it’s just that box is not a computer. And, by and large, as well as an ideas generator, this structure is aimed at the performer.

Sounds
As the sounds are at the very core of the architecture, it’s time to spend some time stepping through them. This is best done by loading in a Kit of four sounds. You can select the Track number, one to four on the left, to play the sounds that make up the Kit, and then use the Sound Selection dial on each part to change the sound that makes up the Kit. It’s also worth having some Patterns ready to trigger as you audition the sounds as these are linked to the Kits so when you change the sounds within a Kit, the Pattern will simply play these new sounds in place of the old so you can audition the sounds in context.

As you go through the sounds it feels a bit random, at first. There aren’t that many large groups by sound type (although you can search by sound type to get them clustered together) so it’s all a bit surprising, but I actually like that. Who wants to delve through 500 bass sounds in one go? So you go from incredible Vangelis -type pads with one preset to attempts at English trumpets the next. The former is brilliant, the latter… please stop doing brass on synths – synths should be used to make new sounds! Having said that, there is a delicate English Horn preset that demonstrated enough subtlety to be very inspiring indeed. This synth sounds best off road.

Indeed, the sounds that really work well are the more fantastical ones: the pads, the dirty rhythmic ones and the sequenced ones. These not only show off the power of the analogue engine but how dramatic the effects can be. There’s some pure joy to be had dialling up the Vangelis-a-like pad, the dirty, quirky Hatcher2; and the other-worldly Kraksong. Basses too are full, large and beefy. I’ve had the pleasure of reviewing a couple of big-bottomed synths over the last year in the form of the Novation Bass Station 2 and Moog Sub Phatty and can say that the arse on this fella is easily as big.

There’s plenty of lo-fi effect type presets to dig into too. Later in bank B there are all sorts of alien-like textures, plenty of bizarre movement and loads of depth. Indeed, with some of the sounds the combination of great preset with effects often meant I thought I was playing a multitimbral performance rather than a single preset sound.

Click here for a top-down overview of Analog Keys features.

From the literature, I (mis)understood that there were supposed to be 4,000+ sounds in the Drive Sound Library. However that is not the case. There are 256 each in banks A and B and the rest, in banks C to P are empty slots for you to fill. A little disappointing  but I’m not complaining too much. Less is more when you have this high a quality engine and set of presets.

Which is where my – albeit small – problem lies. Analog Keys is often about performance, sure, and all about building blocks as a scratch pad composer. I’m not a live performer but can see that there are oodles of features for the player. I don’t think they are particularly well implemented in all cases. To play a Pattern, for example, you have to hit two keys simultaneously and then another to choose the pattern and then hit play. Why not use the big dial to do this instead? Turn dial, click, simple. And the Sound section has Sound Manager and Sound Browser options that essentially do the same thing. So some things are dead straightforward while others unnecessarily complicated. 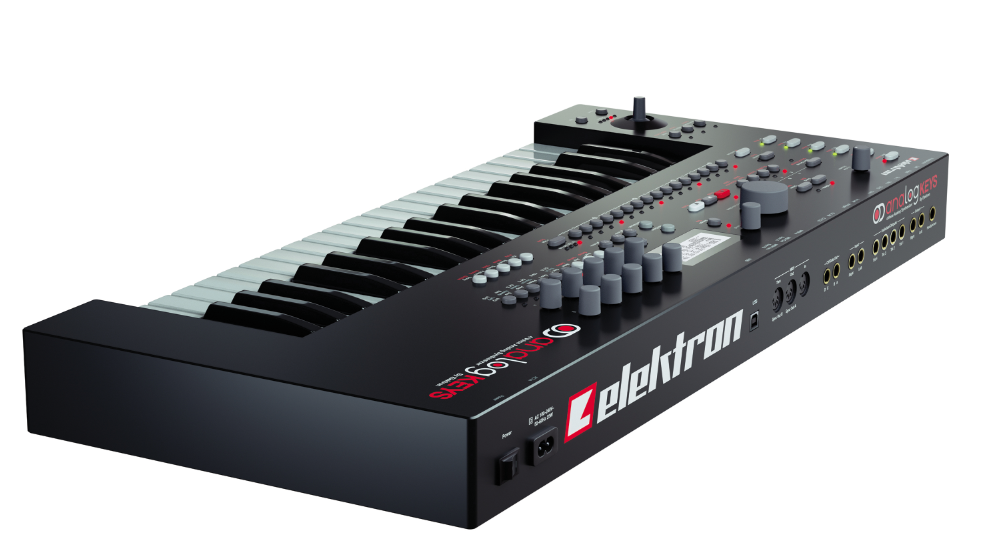 We love the Elektron design ethos. The company designed an analogue synths but made it look incredibly modern – not retro at all – and it fits well with the company’s other products

It’s almost like two people have come at this from completely different drawing boards and both met half way. Do we want a great sounding 4-part analogue synth with digital control? Or do we want a great performance synth? They’ve opted for both, but I think one design occasionally gets in the way of the other.

Which means that the bits that I absolutely love – and I really do – i.e. the synth engine and the noises it makes, are almost hidden behind the bluster of various performance modes and complexity. OK I’ve admitted I’m no performer so would rather use this within my DAW set-up, probably ignoring most of the machine’s potential. But as I said at the start of this review, there is more to come in six months time: a software update that will make this unique: an analogue synth which you can control like a VST, with USB audio. Now that’s a synth that I’ve been waiting for…

So, live performers? This is a synth for you. Scratch-pad hardware sequencer people? Likewise. But expect a steep learning curve because Analog Keys is typical Elektron. They don’t make it easy or cheap, but if you have the cash and are prepared to invest time then you will reap more rewards with this than any other piece of hardware. They’re essentially testing your mind and your wallet. Can you pass the financial and mental test? Are you good enough to own an Elektron machine? If I’m honest, I’m not. Not in its current incarnation. 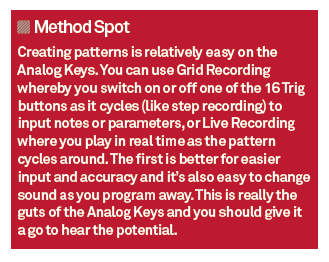 Give me the engine and the sounds, that will do. And give me that update, because in six months time this could well be the synth I’ve been waiting for all my life… 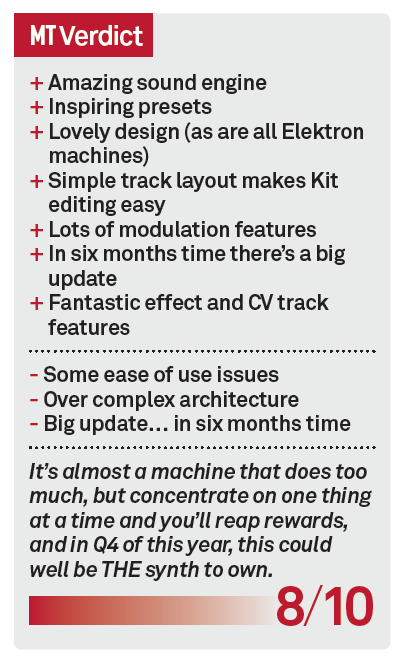