Providing everything from Angelic to Epic, EastWest’s Hollywood Choirs package takes choral samples to the next level, says Dave Gale… 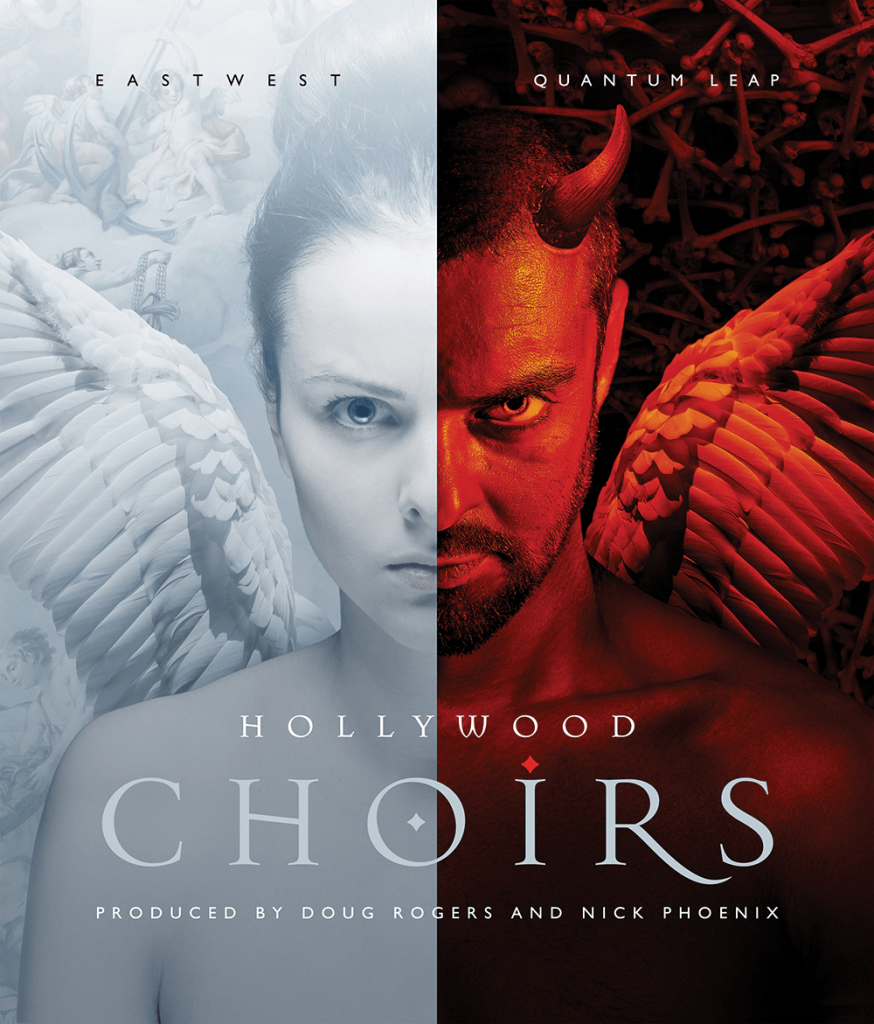 The addition of a choir to a soundtrack or a piece of commercial music is rarely the first musical element that springs to mind. But with movie soundtracks increasingly embracing the sound, they’re more common than you might think.

EastWest have form in the choral tradition; their highly respected Symphonic Choirs and Voices of Passion libraries set the choral bar pretty high some years ago, but in keeping with the rest of their product line, the choir now gets a Hollywood makeover. This means a slick and succinct library that’s designed to cover most choral bases.

The choir is split right down the middle, with sizeable performances from both female and male counterparts. In both cases, the timbre is immediate, centered and offers a really nice balance between brightness and warmth, while there are plenty of choices of performance. Beginning with the basics, it’s possible to select the usual choral stalwarts of Oo, Oh, Ah and Ee, while there are subtle variations within each category, such as Staccato. Legato performances are reserved for the Ah and Oh patches, but with two legato speeds available.

It’s the Vowel area where you will head if you just want to add some choral colour to your arranger’s palette and you’ll not be disappointed with the immediacy of the results. Dynamics are controlled via the modulation wheel, which can also be assigned to MIDI CC-programmable faders, if that’s your preferred method of working.

Nowhere does this dynamic control become more apparent than with the Epic Ah patch. Immediate from the outset, it’s possible to diminish the dynamic to a less-exaggerated vibrato, increasing in vibrancy with an insistent crescendo, as the mod-wheel value rises. 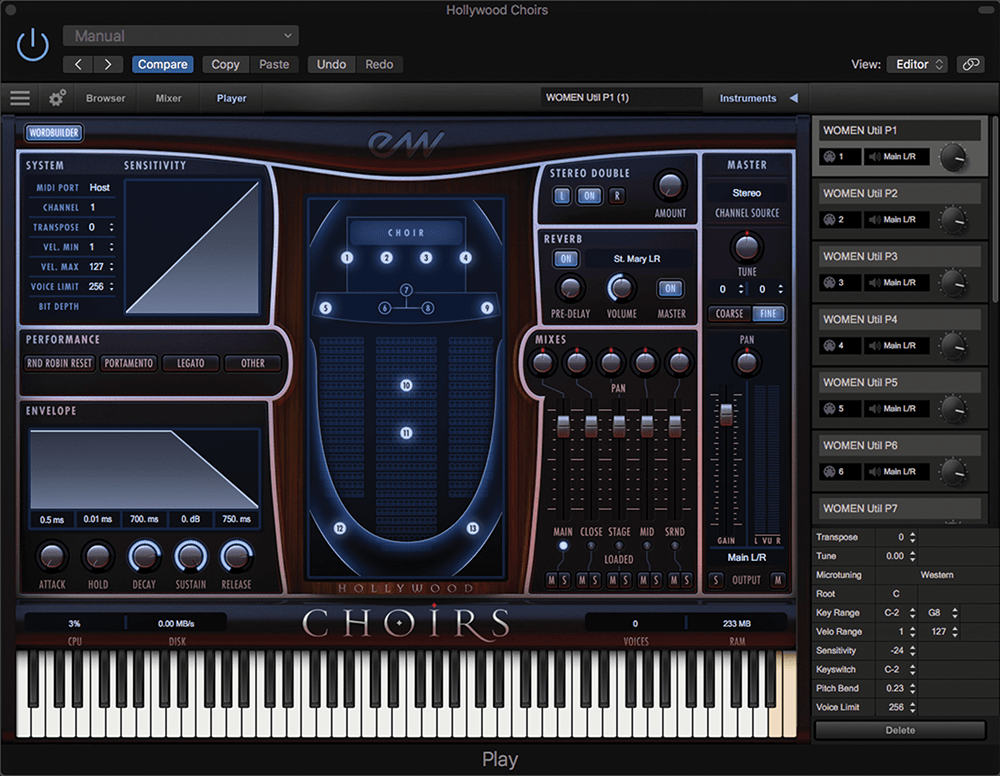 The female voices have a range which is getting on for three octaves, with predictable certainty up to a Top Bb, which is right at the top of the Soprano register. Notes do extend beyond this, but begin to diminish in level, even becoming flaky in certain instances, which is absolutely to be expected, and all the better for some humanistic shortcoming.

It won’t come as a surprise that the entire concept is mirrored in the men’s choir, with the same fine balance of warmth and detail across the main range of Tenors and Basses. It’s fair to say that the minor shortcomings in the absolute extremities of register become more apparent in isolation, but place them in context with the rest of the choir, or even with orchestral covering fire, and any issues evaporate quickly.

Alongside the ubiquitous vowel sounds, there is a sizeable section containing consonants. At first sight, you’d be forgiven for thinking that most of these might not be terribly useful, but diving in, I discovered another palette which is ripe for exploration. The more obvious flavours here, such as Mm, are coupled with longer sustains which are initiated by a consonant, so in the case of the patch labelled D, the offering is more of a ‘Der’ than a D that stops dead.

The RR patch has rolls of the tongue which provide a very aggressive colour, while a couple of patches provide for the vocal equivalent of fret noise on a guitar; breathing, exhales, and more besides, complete the far-from-basic patch set. It’s certainly comprehensive.

The ability to type words and phrases into software and have your computer sing them back to you is nothing new, but never ceases to deliver wonderment. EastWest first brought this technology to us some years ago, with the impressive Symphonic Choirs, however back then the operational side of getting this to work was a little clunky, with further streamlining and development assured. Sure enough, some years later, the technology has come of age, in no small part due to enhancements in EastWest’s own software plug-in.

Now at version 6, the Play plug-in is the EastWest engine that makes all of the company’s sample libraries come to life, with various options immediately available, once the library is loaded. This latest incarnation offers a number of improvements, both under the hood and visually, with one noticeable feature being that loading times seem to be faster – always a huge bonus when scoring larger projects, but coming back to Hollywood Choirs, an enticing WordBuilder button is right on the front player panel, immediately visible from the outset. 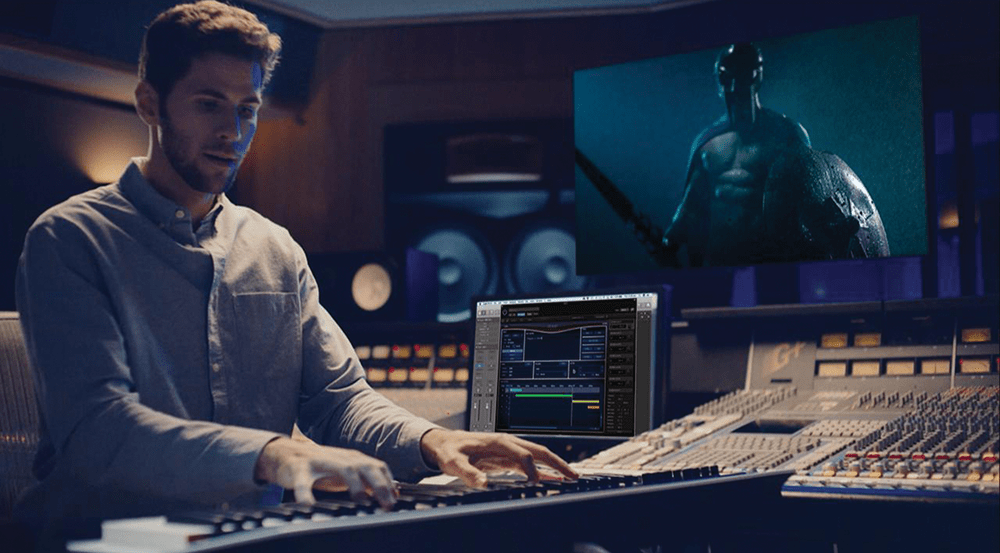 Clicking this places you in WordBuilder mode, where it is possible to type in words and phrases, or select from a number of preset phrases, in English, German, Italian, Spanish, and Latin. Alongside this, the lower part of the screen offers a visual interpretation of how this will play out against a timeline, allowing for a fair degree of control, which is helpful if things aren’t quite sitting properly in performance.

Typing in your own phrases takes a little practice. More often than not, you’ll want to break up words so that every time notes are triggered, you get the desired phonetic, which might also explain why there are options to type words in plain English, phonetically or in Votox, the latter clearly being favoured by the developers. By using some of the existing preset phrases, you can start to see how this breaks down and experiment, with better results quickly becoming attainable.

Although it’s difficult to comprehend the expansive nature of this product, with the sheer number of samples involved in getting the WordBuilder to work successfully, it is for the most part very impressive. There can be difficulty in making out lyrics even with real full choirs, and there is an expected degree of that here.

It’s funny how clear the words sound, when you know the phrase being sung, but in any case, I think this will be more of a timbral colour for most, rather than an expectation to reproduce the Verdi’s Requiem, which to be fair, I tried quite successfully, but then it is in Latin, and it’s very identifiable.

Choirs may not be something you will need every day, but a good-quality one is certainly a great library to have, especially if your music is soundtrack based or epic in nature. This gets exceptionally close to the real thing. It offers ethereal, high female voices, chant-like male voices, and just about everything in between, with the added bonus that it will go way beyond the usual ‘Oo’ and ‘Ah’ timbre. 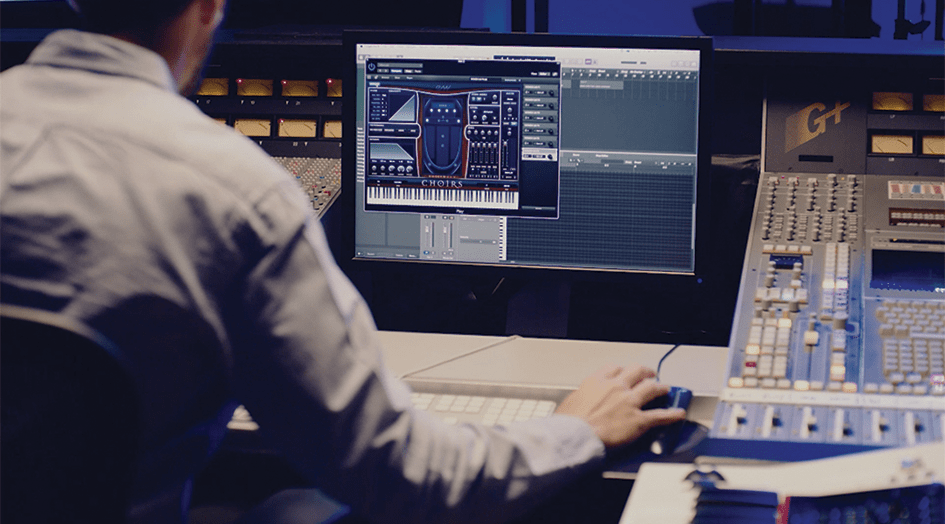 If the investigation of Hollywood Choirs peaks your interest, but the idea of the upfront price tag puts you off, there is another way forward. EastWest’s ComposerCloud is essentially a hire platform, which includes the entire EastWest library catalogue, but for a monthly cost which starts at $24.99 ($14.99 at educational pricing).

By subscribing, the user gains access to a vast collection of very fine sounds, which not only includes Hollywood Choirs, but also orchestral libraries through to commercial rock libraries, with plenty of ethnic and World libraries along the way. Clearly, for one single library, it’s possibly not cost effective, but with everything else thrown in, the ComposerCloud platform starts to look increasingly like a very substantial bargain.

This is a very impressive sample collection. Right out of the box, with the most basic of exploration, it sounds like pure magic. The full Diamond collection of Hollywood Choirs boasts a better bit rate and a full five mic positions, with the Gold version offering a single main mix at 16-bit.

If the cheaper option is where you’re heading, you’ll be getting a fine collection, with a singular main mix which stands up well, however the Diamond version will offer much greater flexibility for the professional. If epic choirs is what you need, this is a highly impressive package which should almost certainly be up for consideration. 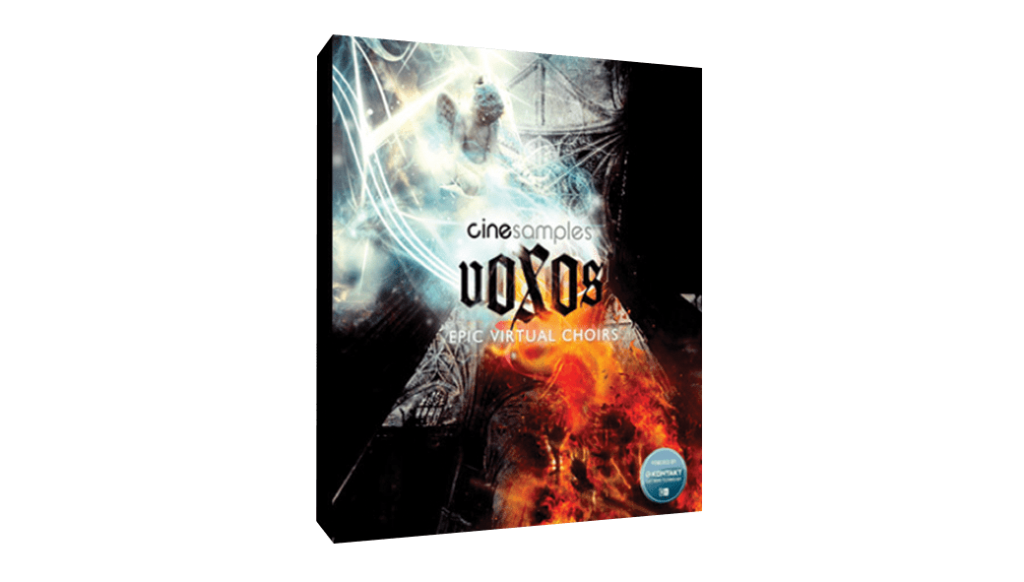 Another classy choral package which allows for levels of lyric based programmability, Voxos also offers solo performances and variation of choir, as well as helpful FX and chordal-based samples. This library also runs in NI Kontakt Player. 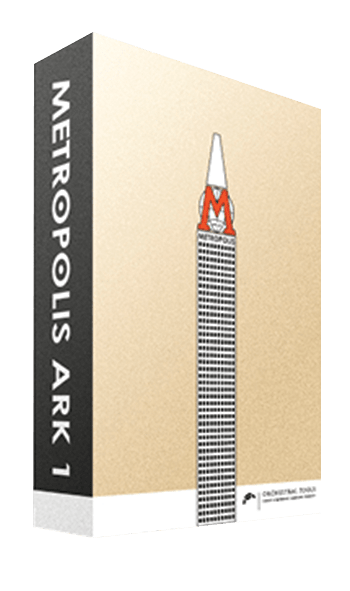