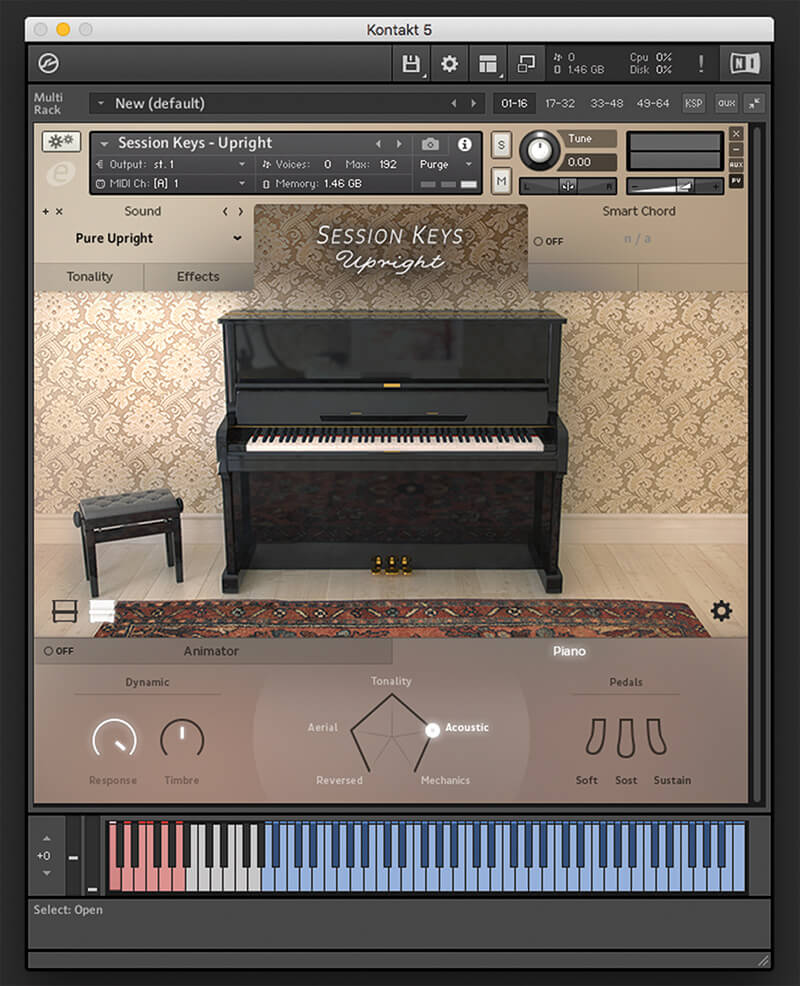 Upright pianos have never had the same glamour as their grand cousins, but they nevertheless have an important role to play in music making. Sure, if you’re creating something dramatic or cinematic then a grand piano is likely to work very well, but when it comes to pop, rock, R’n’B, and other contemporary styles, an upright tends to sit better with other instruments and is more able to cut through a mix without becoming overpowering. With this in mind, e-instruments have created Session Keys Upright, a library of two upright pianos compiled into an instrument for Kontakt and Kontakt Player.

Once installed and activated, Session Keys Upright shows up in Kontakt’s Libraries tab. Two pianos have been sampled for Upright: The first, “Open”, has had its strings detuned slightly, all of its front covers removed, and was recorded in a room that contained sound-reflecting surfaces to give a live, open sound.

The second piano, “Closed”, was recorded with accurately tuned strings, closed panels, and in a fairly dry-sounding room akin to a typical living room. A simple pair of buttons in the interface allows the selection of one sample set or the other, with the background image of the interface changing to reflect the current selection (see images).

Each note produced by Upright is made up of a number of different layers. First and foremost is the direct sound made by the strings and soundboard when a note plays. Accompanying this are samples of the various mechanical noises made by the piano: hammer noise, key noise, pedal noise and so-on. There’s also a resonance layer, which emulates the effect of unplayed and/or undamped strings ringing in sympathy to a played note. 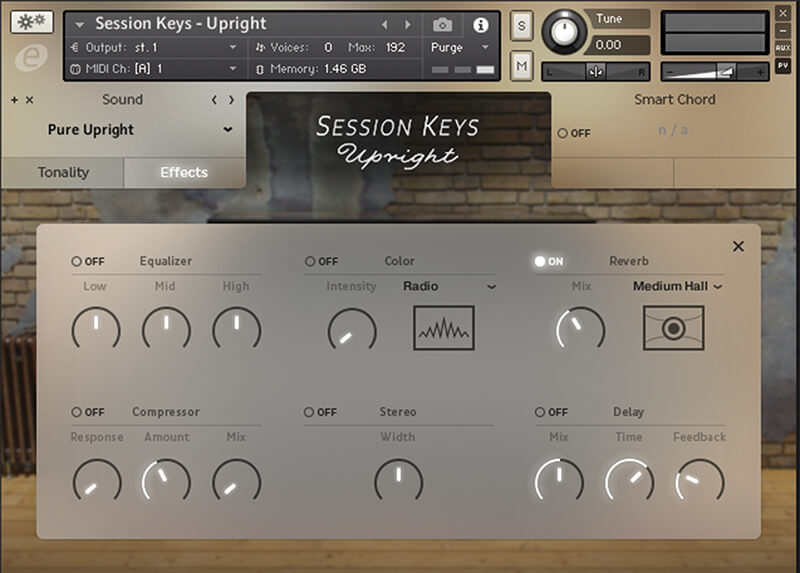 Additionally, Upright features a ‘Reverse’ layer in which the tonal samples are reversed. While reversed piano sounds aren’t particularly useful on a day-to-day basis, their inclusion does allow Upright to produce some interesting effects, especially when blending the Reverse layer with the normal forward-playing layers.

Despite having so many elements to its sound, modifying the tonal characteristics of Upright couldn’t be easier. The main interface screen has a pair of controls for altering the dynamic response and timbre of the instrument.

Alongside these lies a curious pentagonal graphic, referred to in e-instruments-speak as a “Pentamorph fader”. At each corner of this pentagon is a label that relates to an aspect of Upright’s sound – mechanics, acoustic, reverse, and so-on. Clicking a label moves a marker to the corresponding corner of the pentagon, thereby applying a preset balance of sample elements. Alternatively, clicking-and-dragging on the pentagon allows the marker to be positioned, changing the relative balance of the different sample layers accordingly.

The tone can be further modified by popping open the instrument’s “Tonality” panel. Here individual controls allow adjustments to the resonance and mechanical noise layers and to the relative volume of the Reverse layer. The attack and decay envelope can also be modified. To add a final sparkle, Upright sports an Effects section featuring reverb, delay, EQ, compression, stereo width control,
and filtering.

In common with other instruments in their “Session” range, Upright includes e-instruments’ “Animator” technology. When enabled, this feature acts in a similar way to an arpeggiator, playing a pattern of notes based upon the keys being held down on the controlling keyboard. Unlike an arpeggiator, Animator attempts to recognise the chord that’s being played, and then adapts the pattern’s notes to match in an intelligent and musical way.

Each individual pattern contains three levels of complexity and related patterns are grouped into “Songs” – one pattern may be an intro section, the next a verse section, and so on. Patterns within the currently active song can be selected via the keyboard or by clicking on-screen.

Upright ships with around 50 pre-loaded Songs, each containing six patterns, and it’s possible to build your own Songs from these patterns. Furthermore, given the patterns are simply MIDI files, it’s theoretically possible to create your own patterns, although how to do this is not documented and likely to involve some quite specific rules in order that the pattern will work with the Animator algorithms.

Whilst always creating musical results, it is quite easy to confuse Animator’s chord recognition algorithm, especially when playing particularly colourful chords or using extended or broken-up voicings. One way around this is to use Upright’s Smart Chord feature: this allows you to define a set of chords – as well as variations of those chords – and assign these to keyboard keys, or pads on a pad controller. Useful in their own right, when linked to the Animator the Smart Chord feature allows even non-players to create intricate piano parts.

Recording a piano – whether upright or grand – is one of the toughest challenges a sound engineer can face; you can’t just stick an SM58 or C414 in front of one, and the size and acoustic properties of a piano are such that the impact of room acoustics become very significant. 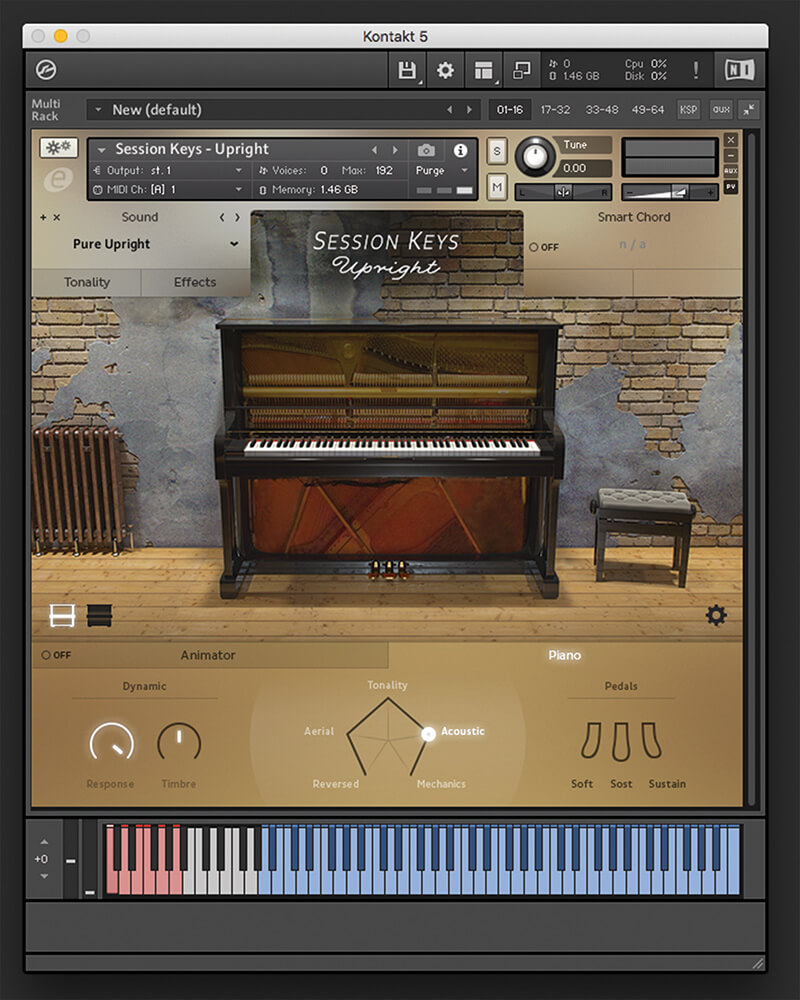 So, for those of us who don’t have access to top-notch studios with well-stocked mic cupboards, and/or who don’t have the time to spend miking and tuning a ‘real’ piano (that will be most of us, then!), the solution has always been to rely on S&S synthesis or on sample libraries. This being so, Upright is worthy of serious consideration by anyone who needs a flexible and authentic piano sound in their productions.

The time and effort that has gone into recording and constructing Upright’s sample set is plain to hear, and it’s clear that no corners have been cut. The quality of the samples is pristine, and they are perfectly balanced across the entire keyboard.

Each note has sufficient samples and velocity switches to never sound repetitive, even when playing very fast repeats of a single note. The inclusion of mechanical noise and string resonance adds hugely to the realism of the sound produced, whilst the simple controls have enough scope to make significant tonal variations with minimal effort.

Non-players and those with only basic keyboard skills will find the Smart Chord and Animator features to be invaluable when it comes to creating piano parts for their music, although more advanced players may get frustrated by the ease with which the Animator can be confused by extended chords and voicings.

The many layers and velocity switches of samples do result in Upright being quite a large library, weighing in at 20GB on disk, and around 1.5GB in RAM when loaded. What’s more, the multiple layers of samples triggered by each note means that the voice count can leap-up in no time, easily exceeding 60 voices during normal playing. You’ll need a reasonably powerful machine to make the most of the instrument. This bulkiness is justified though, as it results in an authentic emulation of two distinctly different upright pianos that are worth every penny of the asking price. 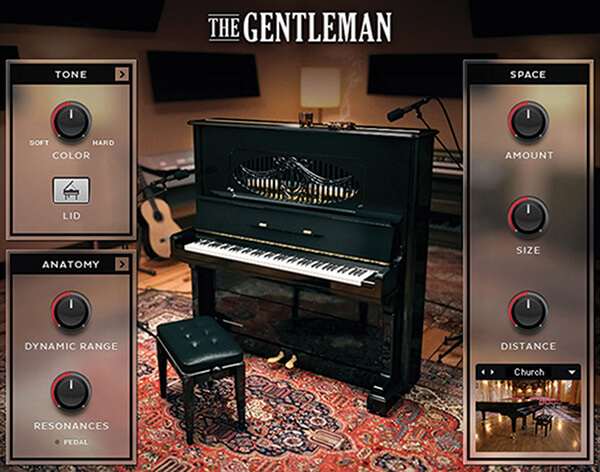 The Gentleman is included with some of Native Instruments’ Komplete bundles or can be purchased from NI’s website. The instrument has a warm, character, but lacks much of the intricate detail (mechanical noise, string resonance, etc) that makes Upright sound so authentic. 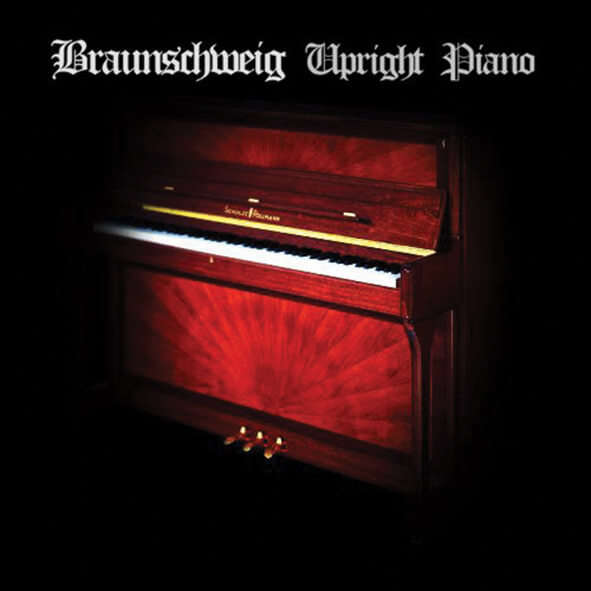 The Pro version of Imperfect Samples’ Braunschweig Piano features a similar level of multisampled detail as Upright. It has a warm sound, but is less tonally flexible than Upright. Available in VST, AU, EXS24 and Kontakt formats.