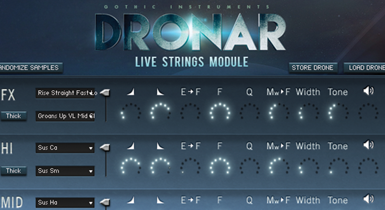 Gothic Instruments’ latest throws open the complex world of the string section, with plenty of interesting surprises. Dave Gale applies rosin to bow, to see how ‘live’ strings can be… 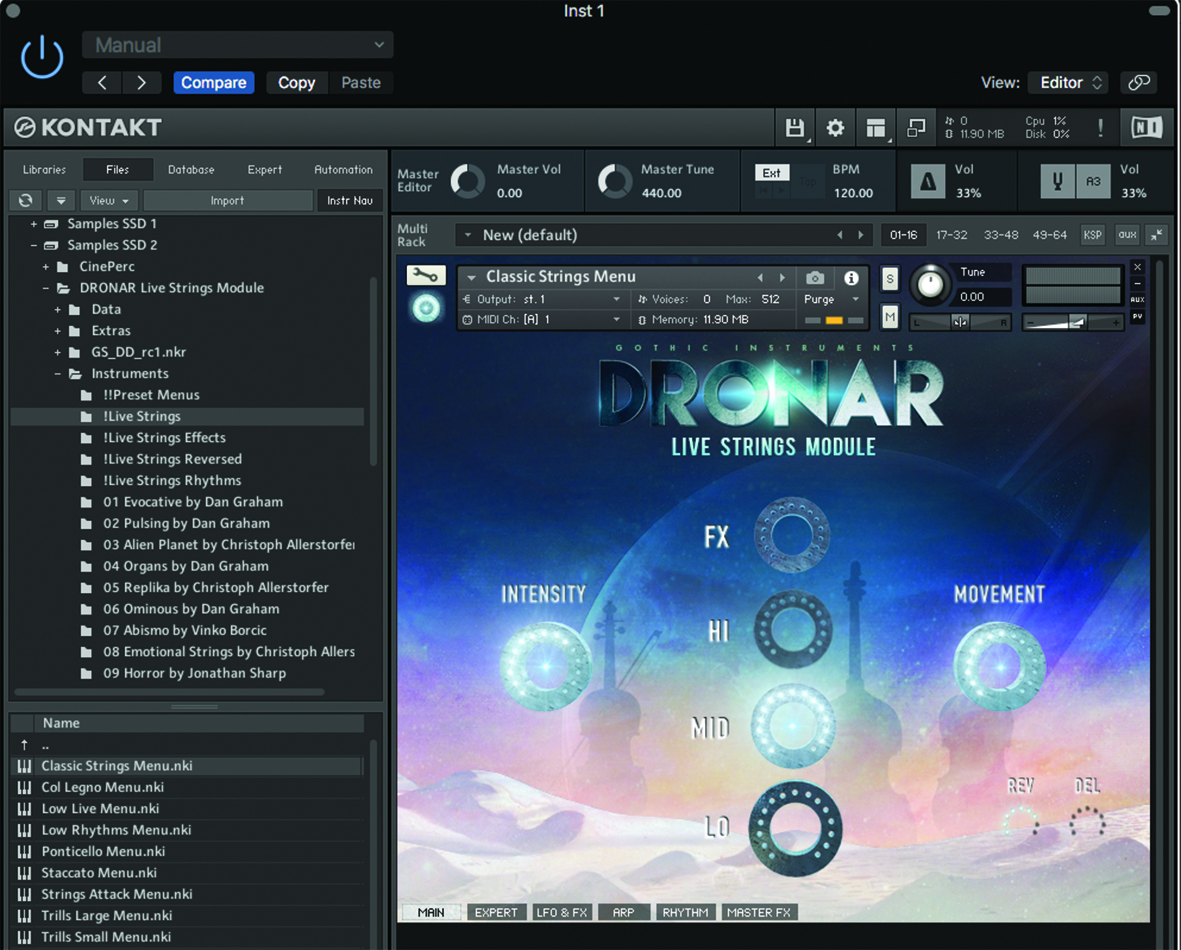 Strings! There’s nothing quite like that sound to add a touch of movement to a track, and more often than not, it’s all down to how you program the various elements of expression that make or break the believability of context, so I was very curious about this new library from Gothic Instruments, which approaches strings from a slightly different angle from the norm.

If you’re going to make a sample library, as with all recording, it starts with good-quality performances and audio capture, and that’s where the Royal Liverpool Philharmonic Orchestra enters the fray, as this is where the original sample data has been drawn. I found this particularly interesting, as for much of the library, many of the patches sound quite processed, so there can be a heavy synthetic quality to the overall sound, but as I would find later, that’s really the library’s strength.

Once downloaded and installed, which was a reasonably quick and painless affair, I quickly discovered this library doesn’t conform to the preferred Kontakt Library format, leaving the user to load the sample patches from the File part of the Kontakt page, and thus requiring the full version of Kontakt, and not the free Kontakt Player. This does mean it’s not quite as easy to load as other libraries might be, but thanks to a very logical and well-thought-out hierarchy, it’s pretty easy to get at what you want, with a minimum of fuss.

I did, however, find that all patches seemed to take noticeably longer to load than many other orchestral libraries I have, which leads me to think there’s considerable audio usage at stake, along with a healthy degree of processing. Investigating further, I found each patch would swallow around four to five per cent of my computer’s CPU (2.3GHz, Quad Core i7), which is quite a chunk of processing, for a sample library. Despite this, there is an argument that you won’t need to load too many of these patches simultaneously, so most users shouldn’t have any issues.

Once loaded, there’s quite a sonic cavalcade. Beginning with some basic patches, the Classic Strings patch is exactly what one might expect, but in its opening incarnation, is quite reverberant and syrupy, with a long release tail. At first sight, you might be forgiven for thinking that the main page controls, relating to High, Mids and Lows, might be some form of EQ setting, but it’s actually more to do with the engagement of further instrumental samples, as each increases with the turning of the appropriate pot. Which instruments are engaged is dependent on the patch. Enter the Expert page and the long tails of release could be quickly and easily tamed, making them usable in settings where a faster tempo might be required.

Moving on to some of the more FX-based patches, there are some sonic treats on offer. The Swarm Col Legno throws open Pandora’s Box and starts to demonstrate where this library offers considerable strength. The knocks and harmonics springing forth sound wonderful and, in common with all other patches, offer a degree of key switching placed in a very accessible location on the keyboard (no extremities here!).

However, I was surprised to hear a lack of Round Robin sample triggering, resulting in the same sample being triggered over and over, which could be an issue for anything other than single-shot usage. Largely, the key switching throws open further incarnations of the same patch, often layered with effects.

Talking of which, many of the patches have a lovely sense of movement, often panning across the stereo spectrum, which could be very enticing, but could also end up being something that the user wishes to switch off and, if I’m honest, endorses where this library might excel, and also where it might prove to be at its weakest.

If you’re working to a tight budget, this could be money well spent, especially if you are a student, as there is a sizeable student discount to be had on this product if ordered from Time+Space. Yet as a standalone string library, to cover all bases, you’ll be barking up the wrong tree. Effected strings, drones and pulsating/arpeggiated patterns are the order of the day here, and as such, will complement other libraries which are more vanilla in flavour.

It does offer a degree of diversity, so you could get it to work in more orchestral settings, but you might struggle to make it sound like a real string section, unless there’s plenty of covering fire. On the flipside of this, there’s plenty of potential here for drones, and with the large amount of raw audio and the back-end processing, offers plenty of interesting programming possibilities.

With the large quotient of effects-based patches and timbres which start from a point of anything other than your regular string library, this is certainly going to appeal to soundtrack writers, and perhaps musicians who want a good-quality library that covers all the bases, but offers less in the ‘usual’ category of played instrumental-type samples. Live Strings does have scope to use in this capacity, but to my ears, sounds rather synthetic, which might also have something to do with the brightness of the patches. This could again be a real strength for soundtrack work, or anything that’s required to cut through a mix.

The lack of Round Robin samples within the more regular patches does start to show the limitations of the library; nowhere more so than in the Staccato strings, where the rapid fire of the same sample immediately sounds synthetic. However, a good workaround here will be to employ Live Strings’ Rhythm Editor settings, where the pulsing of staccato and pizzicato playing can be achieved in a much more believable way, thanks to elements of dynamics and humanisation. It’s possible to dictate where accents should be applied, thanks to the size of the ‘dot’ in the graphic, but curiously, I was unable to place an accent on anything other than the main beat pulses, meaning that dynamics might have to be programmed elsewhere. Talking of which, the usual dynamic control is accessed via MIDI CC 1, better known as the mod wheel, so it’s possible to program dynamics this way.

I get the hint that within this weird and wonderful library, there’s great scope for creating some very dramatic drones, and part of this makeup would undoubtedly have to be the LFO and FX sections. On the back end, there is the usual reverb and delay, but further back in the signal chain are some highly useful settings, which stay in keeping with this library’s overall ethos. The distortion setting has clearly been tailored to offer something that’s particularly crunchy with strings, and sounds really great as a result.

This is a tricky one, because Dronar Live Strings is very competitively priced. Taking into account the strengths of this library, let’s consider some worthy alternatives from Spitfire Audio. Albion V Tundra offers some excellent otherworldly string samples, along with a whole batch of other sounds, as does the Olafur Arnalds Evolutions library, which concentrates more on what are termed ‘Frozen Strings’.

If you want a taste of this, on the cheap, look at the Labs section of the Spitfire Audio website, where you’ll find basic Frozen Strings and Scary Strings libraries, along with other equally tempting libraries, for just £3 per library. It’s essentially a charitable donation to the cause, and will yield some very tempting tidbits, including the rather wonderful Soft Piano.

The prices of these libraries is far more than for Dronar, but you arguably get much more for your money. Either way, one of them will fit your budget.

There’s no doubt this is a very usable library, but probably not as a main source of unadulterated strings samples. That’s not what it sets out to do, but what it does do is start with some great raw string samples and then dish them up in an altogether different way, which would be really suitable for soundtrack, drones and especially suspenseful and horror-based cues.

It’s got a price which makes it very competitive, so it would be unfair to compare it to some of the larger and more symphonic-based libraries, which clearly offer the full gamut, but here we get drones, effects and reverberations that would add a lovely palette to an existing library. If you’re working on a budget and could use some basic string patches, but without expecting them to do too much, this will work very well for you. Having said that, it can sound enormous, but in a sedate way, when you want pads to literally pad out the mix. This it does well, with sonic interest and movement.

I applaud what Gothic Instruments has done here; approaching the Live Strings title from an altogether different stance – so much so, I would say that the title ‘Live Strings’ is possibly a little misleading. I would call it ‘Live Effected Strings With A Large Dose Of Hardcore Attitude’, but to be fair, that doesn’t roll off the tongue quite so easily.