Native Instruments has released an impressive range of products since the doors opened in 1996. In terms of software the company pretty much covers it all these days, producing synths, samplers, drum machines, processing plug-ins, sequencing and DJ’ing software.   Manufacturer: Native Instruments Price: £645 Contact:  2Twenty2 – 08452994222 Web: www.native-instruments.com On the hardware side are the Maschine music-production […] 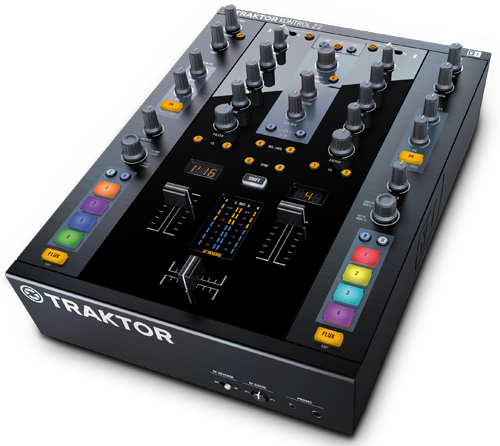 Native Instruments has released an impressive range of products since the doors opened in 1996. In terms of software the company pretty much covers it all these days, producing synths, samplers, drum machines, processing plug-ins, sequencing and DJ’ing software.

On the hardware side are the Maschine music-production system, an audio interface in the form of Komplete Audio 6, and various Traktor DJ audio interfaces and controllers. However, it’s not until now that Native Instruments has developed a standalone mixer in its own right, and the Z2 does this while also being a fully fledged controller for Traktor. Combined with a pair of turntables or CD decks on which to use the provided time-code vinyl/CDs, it’s everything you need for DJ’ing.

The Z2 is laid-out in the classic style of a traditional scratch/battle mixer, with plenty of space around the channel faders and crossfader enabling fast-action DJ routines. The filters and EQ are placed in line with the channel faders and are part of the mixer itself, so with our two turntables and some vinyl we could instantly DJ in a traditional sense using faders, EQ and the bi-polar high-pass/low-pass filters we’ve come to love. There are phone and line RCA inputs for the main two channels and a jack mic input and auxiliary stereo RCA pair. These have a shared input, and a Tone dial enables you to create a basic EQ balance for the mic input.

The Z2 feels like a real mixer – it’s solid in terms of build and weight, certainly no lightweight affair. We particularly liked the physical response of the crossfader and channel faders for mixing and scratching, though we’d have liked the curve control options available for the crossfader to be available for the channel faders too. It’s hard to do tight rhythmic work when the range of a fader is spread across its entire length, so most performance mixers of this type would be equipped with a curve control for creating a user-defined sweet spot to work with. However, given the price NI is asking we can accept that you don’t get everything you might want.

Hooking up the Z2 to the included Traktor Scratch Pro software is a breeze: simply install the software, plug in the mixer and follow the setup wizard. The recommended setup for using the Z2 controller with Traktor is two standard decks and two remix decks, enabling the Z2’s various physical controls to most fully integrate with the software.

Without having to consult the manual we could browse the library using the single push-dial at the top of the mixer. Setting up and triggering cue points and loops for the decks and remix decks was also self-explanatory. In fact, the only elements we had to check up on were features such as the pre-and post-fader effect control and the new Flux function. This is a time-slip function that enables you to mess with a track as much as you want in terms of cue points and loops. When you disable the area you’re currently playing with, playback resumes as normal. This enables you to get creative while negating the risk of messing up the arrangement of the track playing.

The effects section has been updated with Macro effects. These are chains of effects that offer a good variety of sound processing; they act as single effects rather than groups in the respect that they have just a dry/wet and variable parameter control to play with. This works perfectly with the two dials per effect on the mixer.

After many mix and scratching sessions we’re happy to report that the mixer serves very well as a controller as it removed the need for us to touch our laptop at all, which means you stay in the creative mindset. The intuitive layout will make immediate sense to those with previous experience of using DJ software, but complete novices will have little to fear either.

The lack of a curve control for the channel faders prevents this from being perfect, but the price makes up for the shortcoming. What you get is a quality mixer, controller and a well-featured software package.