Drawing on Pioneer’s decades of experience in the DJ booth, can this new mixer impress the studio and electronic live crowd? Is it one mixer to rule them all? 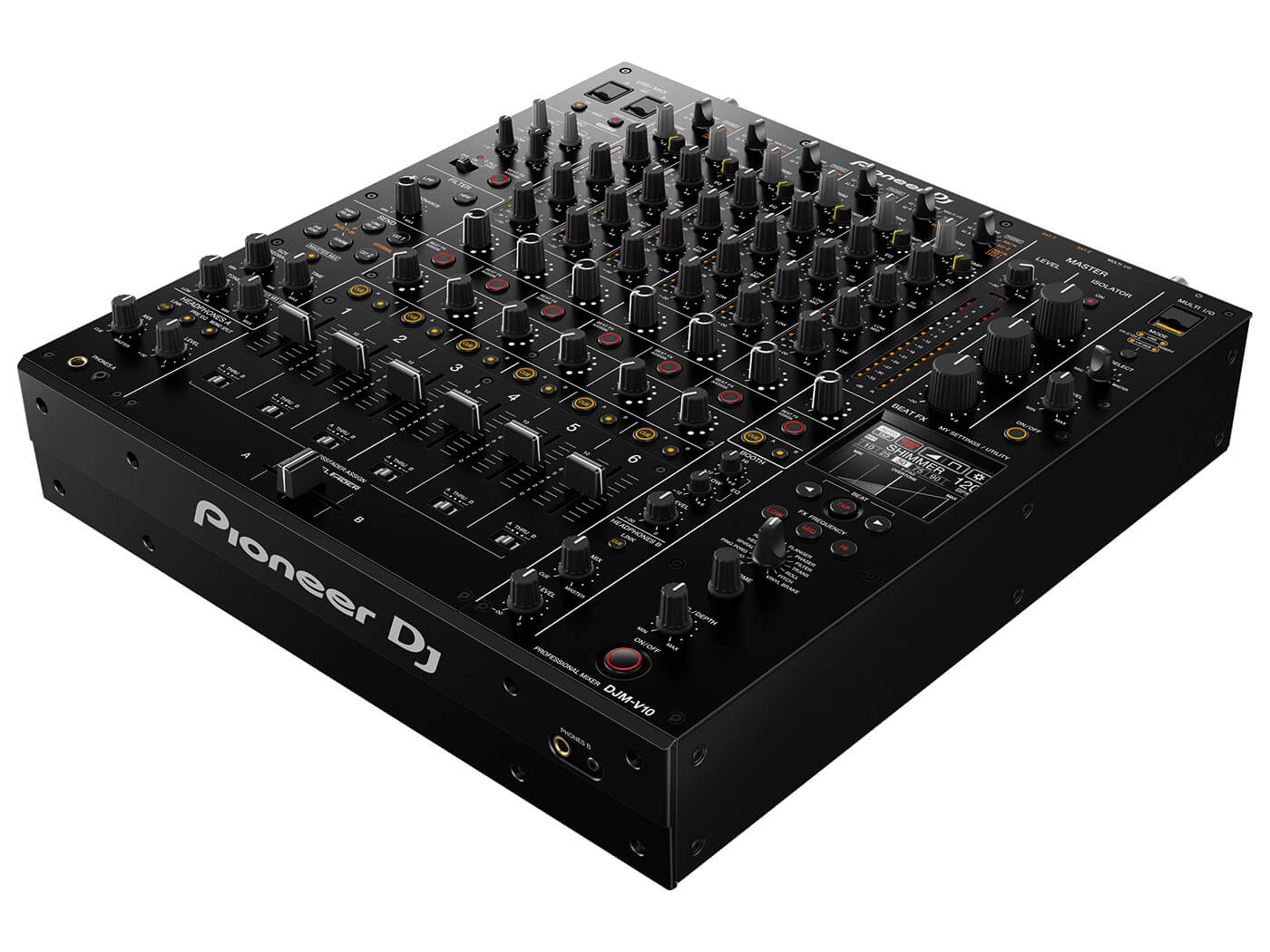 Long gone are the days when simply mixing one track into another was considered skilled DJing. Today’s audiences are a little more demanding, and countless companies have had to create innovative new products or alter their existing ones to keep up. Though Pioneer’s products still dominate the booths globally, there are many alternative ways to DJ beyond industry standard kit – and this six-channel V10 mixer, which addresses changing audience expectations and industry mores, makes for some interesting new workflows.

Weighing it at almost 12kg, this mixer is a monster. You’ll need to clear some room for the V10, as it takes up much more real estate than Pioneer’s full-size CDJs, especially once all its power and audio cables are plugged in. The layout should feel familiar to past Pioneer users. Most of this mixer’s superpowers, however, relate to its complex routing and I/O options.

You’d expect superpowers too, given that this thing costs almost £3,000. As a follow-up of sorts to the DJM-900NXS2, there’s no getting away from the fact that this is Pioneer’s most premium-priced mixer. Thankfully, it backs up its boasts with a sound that beats anything else in its range. There’s a 32-bit SABRE 8-channel DAC on the master and booth outputs, and Asahi Kasei Electronics 32-bit A/D converters on the analogue channel inputs. Thanks to the V10’s digital AES/EBU output, you can keep the signal quality extremely high too, even over long distances.

The heart of the mixer is a neat touchscreen from which settings can be saved and recalled. From here, you can change fader and crossfader curves, effects presets, MIDI channel outputs and more. The touchscreen can also be used to interact with Beat FX parameters in real time during performances.

The DJM-900NXS2’s Sound Color FX feature has here been replaced with a send section (though the DJM-900NXS2 also features a send and return section). The V10’s send section exists as two selectable physical external send/return ins and outs on the rear, and has built-in effects (short delay, long delay, reverb, dub echo). Each of its effects can be tweaked but, unfortunately, none of their time or size/feedback controls can be time-synced.

Via its routing, you can send the V10’s effects at full mix and return them to another channel,  which best explains why this behemoth sports six channels. Not only can it support six devices, if you switch the inputs and routing, the V10 can act as a four-channel stereo mixer with two stereo send/return channels. You can, of course, configure the V10 in many other ways too.

With the ability to route effects this way, you can also EQ the wet effect channel and do further processing via Beat FX, and the filter. Combine these qualities with the V10’s efficient fader control of the overall signal, and it’ll let you get very imaginative, very quickly. It’s frustrating, however, that although these are post-fader effects – which means that even when you drop the source signal the reverb or delay tails will continue to decay, rather than immediately cut out – you cannot silently feed the effects send with the track fader down. Such a trait would have allowed the user to leave ghostly 100 per cent wet reverb tracks in the mix, or 100 per cent wet delays and dub echoes. 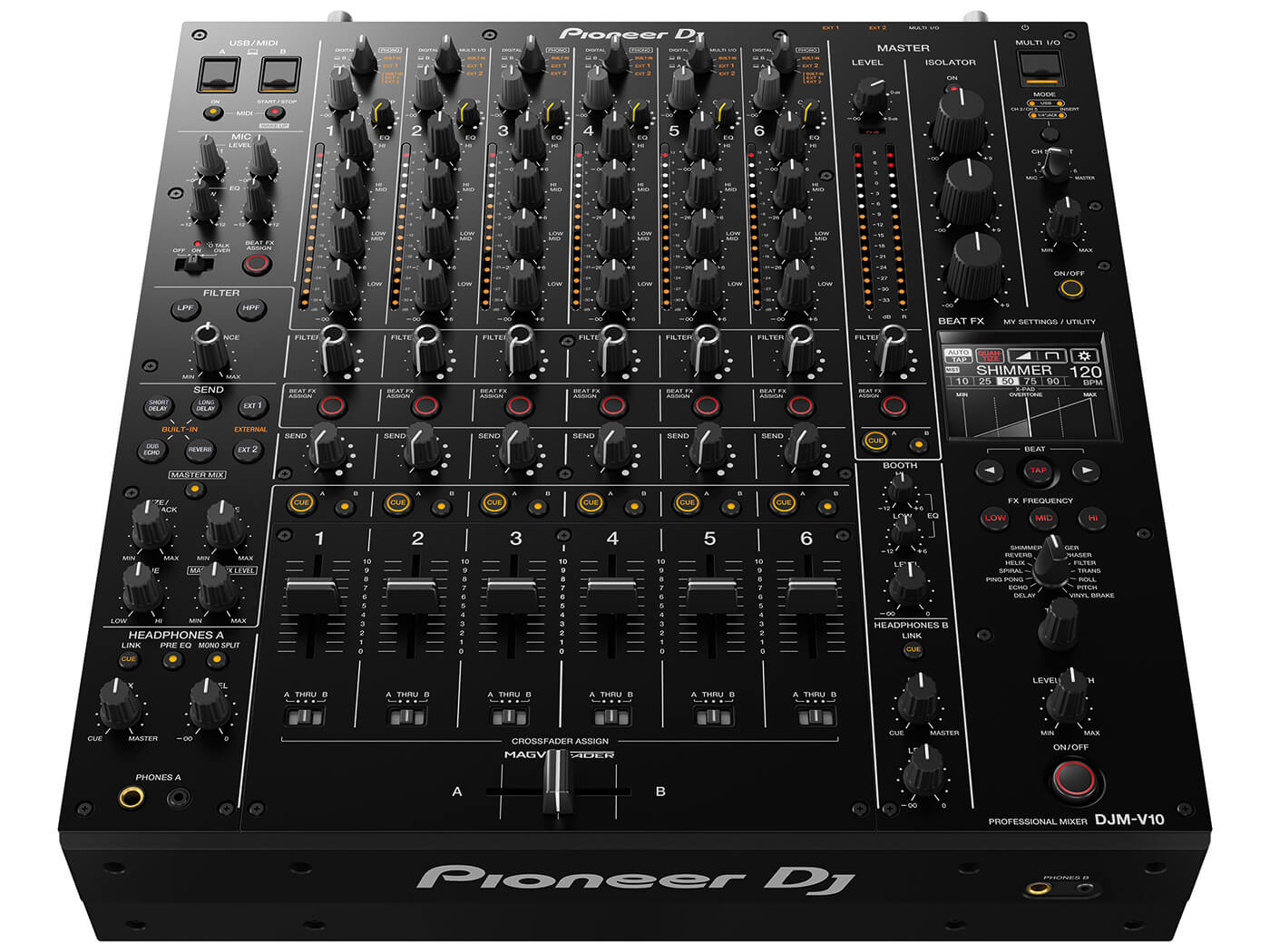 With the V10, Pioneer has also altered the way its filters function. Now existing as buttons for a high- and low-pass filter, and a separate resonance-control knob for both, you’ll find the filter section above the new Send section. The filters are controlled by a sweepable rotary. Given that the V10 boasts six channels though, it’s exasperating that you can’t low-pass one channel while high-passing another.

Yes, the V10’s filters sound lush and feature twice the range of the DJM-900, as well as resonance control, the single-pot filter design on previous DJMs is easier to manage while DJing. The ability to set filter types independently was very valuable, and it’s a shame Pioneer has done away with that.

Again, though, this mixer has been designed to take things beyond traditional DJing and excel in a variety of non-traditional setups. The changes to its filter function aren’t squarely aimed at DJs.

The V10’s 4-band EQs are a pleasure to use, and with the mids split into high and low sections,  each channel is much more controllable. The low and high bands have infinity and +6 while the two mid bands will cut to -26 and +6. There’s another new feature on the V10 in the form of a single-knob compressor on each of the six channels, next to the usual trim controls.

It’s a fantastic addition, useful for DJs as part of live and hybrid sets. The make-up gain is also set automatically, so there’s no need to tweak the trim knob either, making it much more efficient. Having the ability to thicken an old vinyl, or hype up a connected synth or other inputted device to match the fuller sound of a mastered modern record can help glue your set together.

Collaborative and flexible features such as two individually assignable headphone outputs and two USB-B connections make this an ideal mixer for duos or those with complex hybrid rigs that might make use of multiple laptops, loops, MIDI, and hardware synths and sequencers. It’s well suited to back-to-back-laptop sets and less traditional, more complex handovers.

The V10’s ability to let you cue independently and its flexible routing and I/O options are features far beyond those you’d find on mixers in most DJ booths. In fact, the V10 is almost as pliable as a studio console in its connectivity and routing. All the pots and faders output MIDI too, and the V10 will output MIDI clock to keep everything in sync.

That the V10 sports a simple high and low EQ on the booth output is perhaps a sign that Pioneer has been listening to its customers – this has been a much-requested feature for some time. Being able to control what you hear in the booth is important, as is the ability to monitor headphones pre-EQ, and link headphone signals at the touch of a button.

The V10’s smooth three-band isolator is another master tonal-sculpting tool. It’s easy to use and can be turned on and off effortlessly. The problem with it, however, is that it’s limited to the master channel, so you won’t reach for it often when you’re in full flight with the mixer. This is especially true given that the regular channel EQs have infinity cuts on the low and high, although the isolator’s mid band has full infinity cut and all three of the isolator bands will give you a 3dB boost up to +9dB for extra colour if needed.

The isolator is more colourful than the regular EQ though, offering a more musical feel when sweeping through bands, and a different Q. The ability to punch it in and out makes for fun cuts but the lack of flexibility in the signal assignment and it being trapped on the master channel means the isolator is ultimately a little disappointing.

The V10’s ultra-modern multi I/O connection lets you hook it up to an iOS device via the USB camera connection kit. Here, you can route audio through an iOS device and use it with an external instrument or effects app, such as the Pioneer’s RMX-1000. It’s features such as this that will likely ensure that the V10 becomes a staple in many clubs. 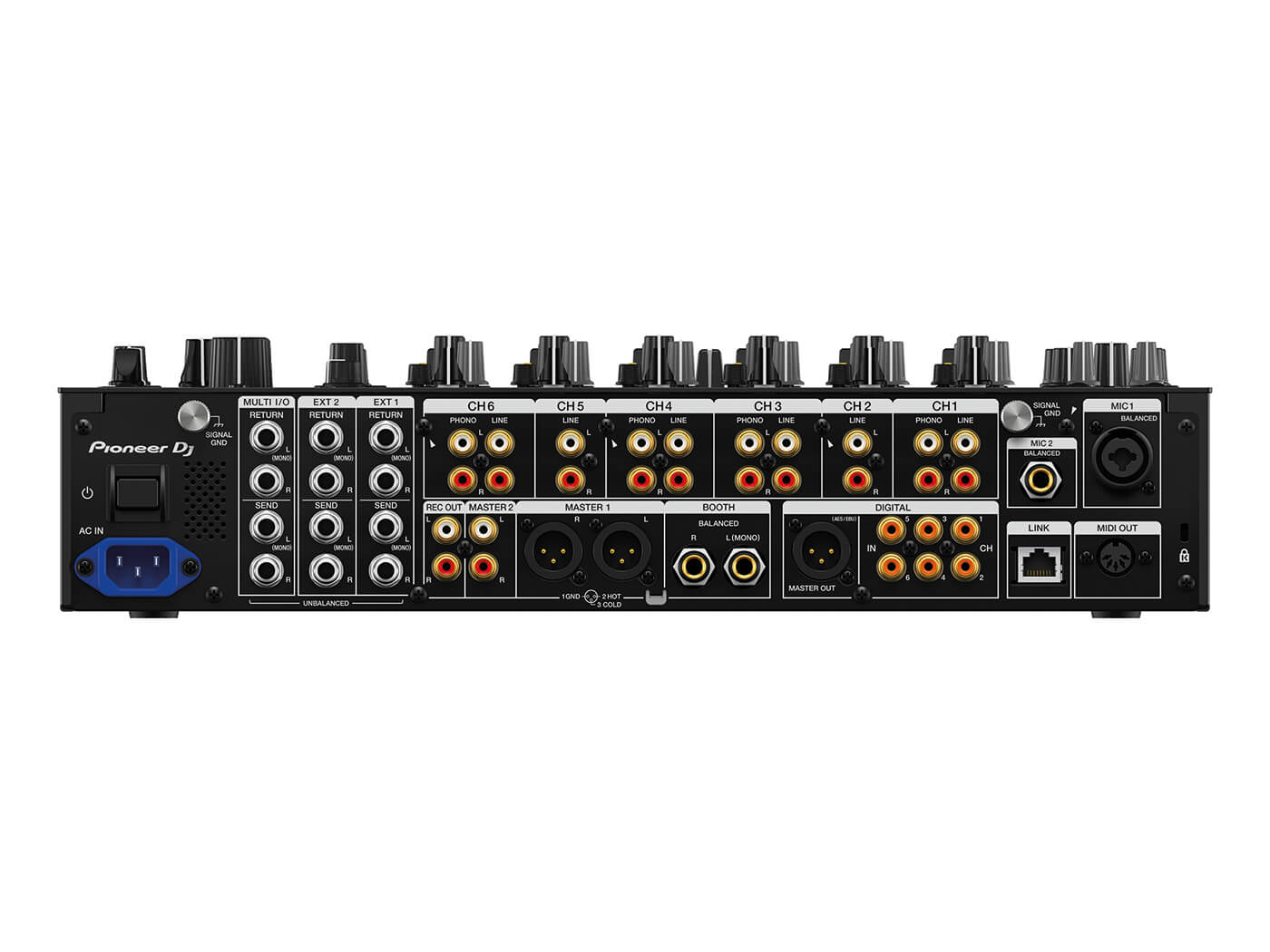 Too long have live electronic artists struggled to find robust performance mixers that offer the tools and flexibility to connect more than just turntables and CDJs. With the V10, Pioneer has addressed much of the feedback that’s come from their previous products and produced a hulking central mixer that can take almost anything you throw at it.

The integration of USB connections, fast routing and stunning effects make the V10 a flexible mixer. It’s comfortable for quick cuts and crossfades, and can tackle more complicated setups with ease. For live electronic musicians or DJs looking to add synths, drum machines and more to their sets, there are few mixers with this many significant features. Such flexibility doesn’t come cheap though. The V10 is a serious investment. Unless you’re going to use its advanced features and extra I/O, it might not be worth the cash. But if you’re after a piece of gear that will push you creatively and open up new performance possibilities, this might be your dream mixer. 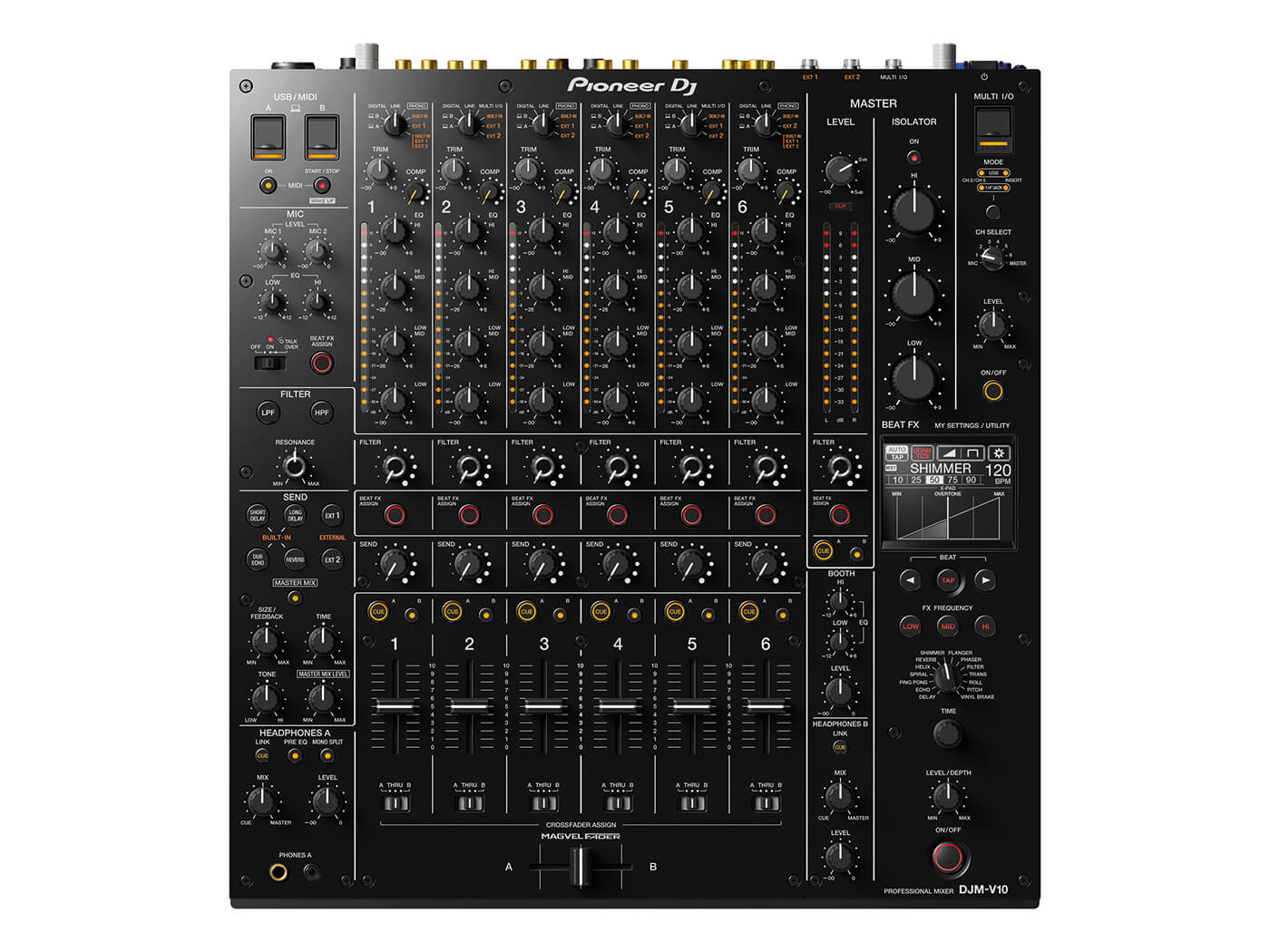 This isn’t an upgrade to the DJM-900NXS2 per se. For straightforward DJing, the DJM-900 mixer remains our first choice. For artists looking to move beyond DJing and add synths, drum machines or hardware and software effects to their sets, however, the V10 packs in everything you could need and more. It’s not a low-cost device but its solid build quality will see the mixer last many, many years.

There are no low-cost competitors when it comes to this feature set either, and only a few serious alternatives in its price range, and even these don’t offer the same extensive digital and effects integration as the V10. This brute could easily become the new centre of your studio if you prefer to program rather than perform. 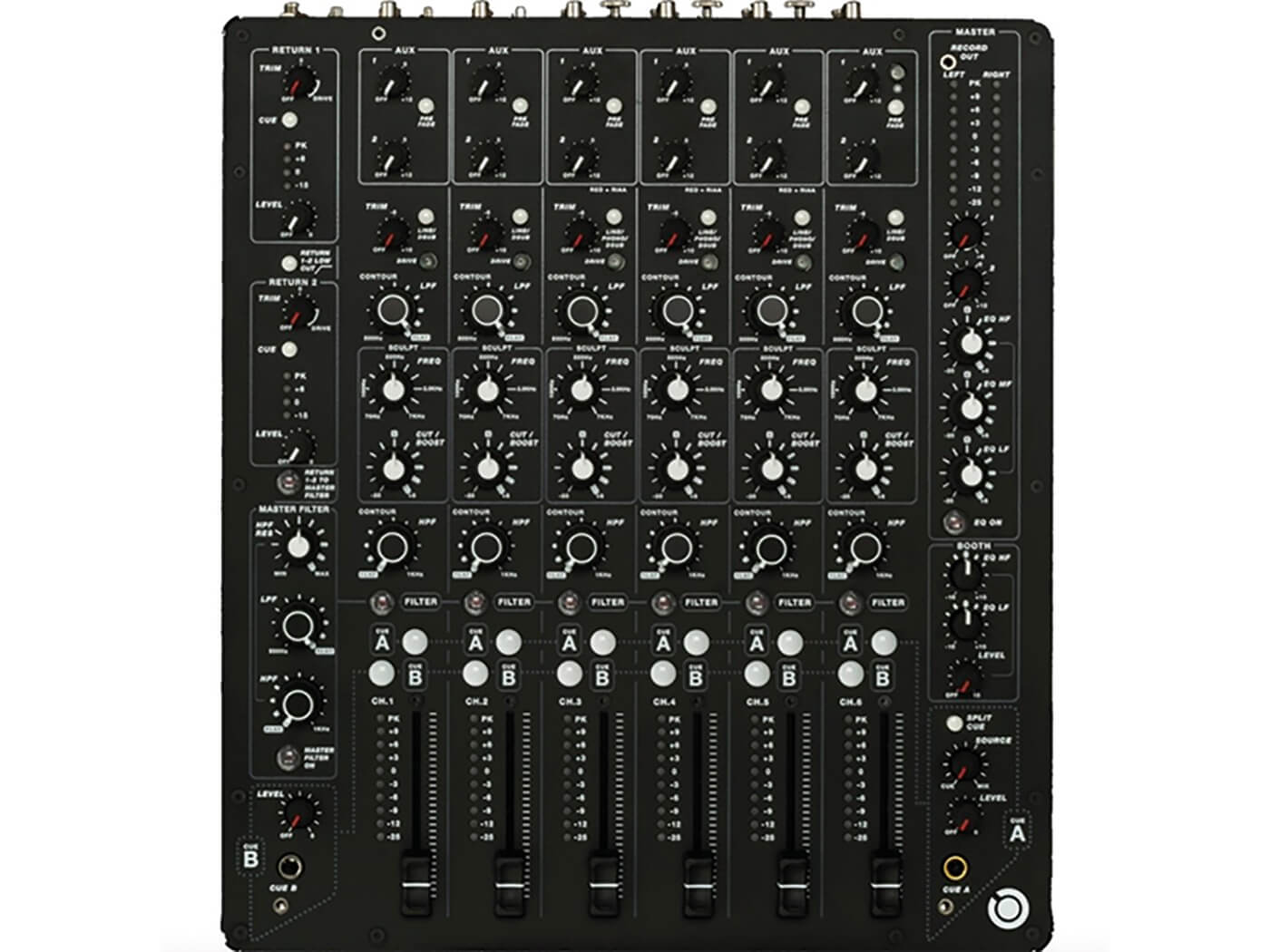 Created by Richie Hawtin and former Allen & Heath designer and engineer Andy Rigby-Jones, this mixer was one of the first DJ and live performance hybrids. It lacks the expansive effects and digital integration of the V10 BUT the purely analogue Model 1’s high-fidelity goodness will likely appeal to a different style of performer. 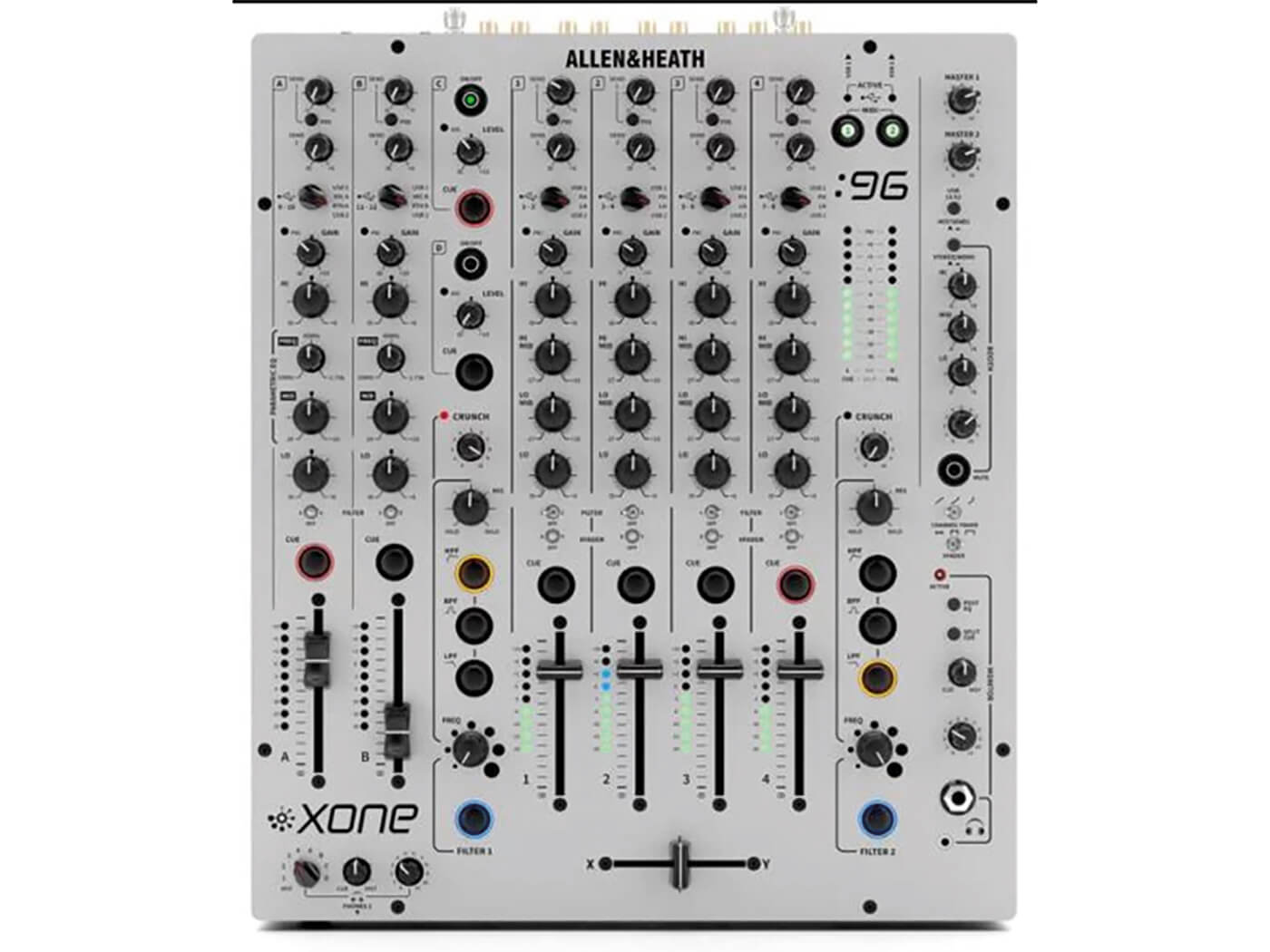 You could call this the king of the large-format DJ/performance mixers. The Xone range is famous for its build quality, superb sound and lovely filters. It also lacks the high-tech modern features of the V10 but many purists swear by its sound and love the simple layout. It plays well with MIDI too.