Pioneer DJ’s latest offering is a keenly priced controller for the brand’s own rekordbox DJ software. Let’s find out whether it can mix with the best. 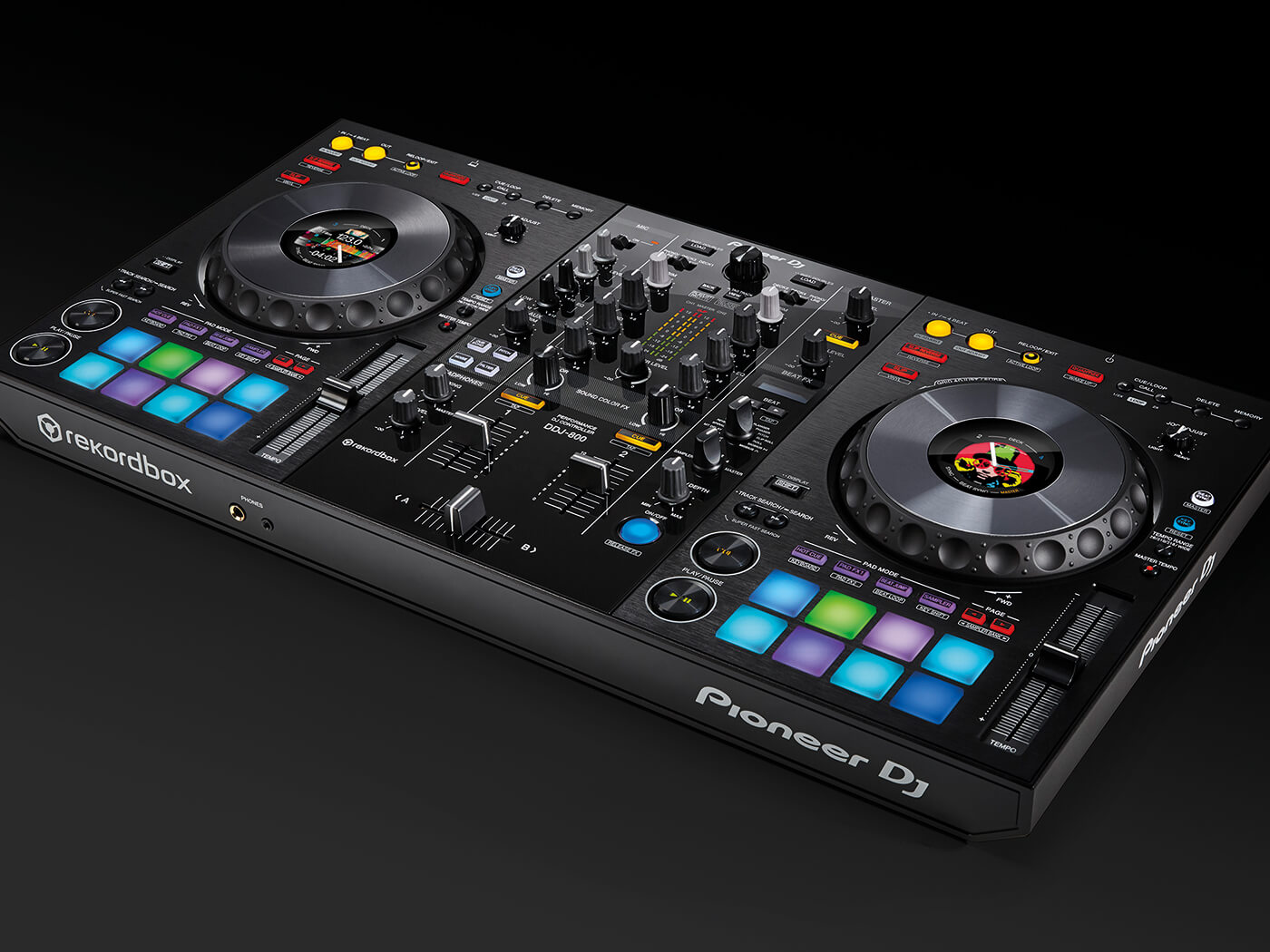 The DDJ-800 is Pioneer’s latest dedicated controller for its rekordbox software (the price of the hardware includes a licence for the software), sitting between the rather basic DDJ-400 (£250) and four-channel flagship DDJ-1000 (£1,129) in the company’s range.

Rekordbox has grown into a large and potentially quite confusing software suite. Originally launched alongside the CDJ-2000 players in 2013, the program began as a way of sorting and organising files, essentially a library system for tagging music, preparing sets and transferring files to USB sticks. Pioneer DJ expanded the package recently to include the optional rekordbox DJ, a £120 digital DJ’ing solution controllable via the company’s own CDJs and controllers, third-party options or control vinyl. There’s also a rekordbox app for iOS and Android, which is a basic mobile DJ’ing solution in its own right.

For DDJ users, rekordbox can be seen as a rival to the likes of Serato, Traktor or VirtualDJ: the software on which the whole platform runs. Despite similarities in appearance, it’s important to note that the DDJ controllers only work in conjunction with the software, not standalone; if you want standalone, laptop-free operation you’d need to look to alternatives in the company’s CDJ and XDJ ranges. There are no slots for CDs, USB sticks, SD cards or any other kind of removable media on the DDJ, but it does act as an audio interface, so there’s no other hardware required except your laptop and a pair of headphones.

Out of the box, it’s immediately apparent that the build quality of the 800 is decent, if understandably not quite up to the standard of Pioneer’s range-topping gear. You can also see where features have been dropped from the DDJ-1000 to make a smaller, more affordable unit.

Most obviously, the jog wheels are smaller, cheaper units than the CDJ-2000-spec ones you find on the DDJ-1000. Elsewhere, the mixer section is slimmed down, which has the fortuitous bonus of allowing a few subtle changes to the layout of other controls, giving a little more space to adjust controls like the headphone cue mix and levels of headphones, master and booth outputs, and sampler. Furthermore, the crossfader is a simpler type than the Magvel unit found on the DDJ-1000, while the LED rings have disappeared from the cue and play buttons. 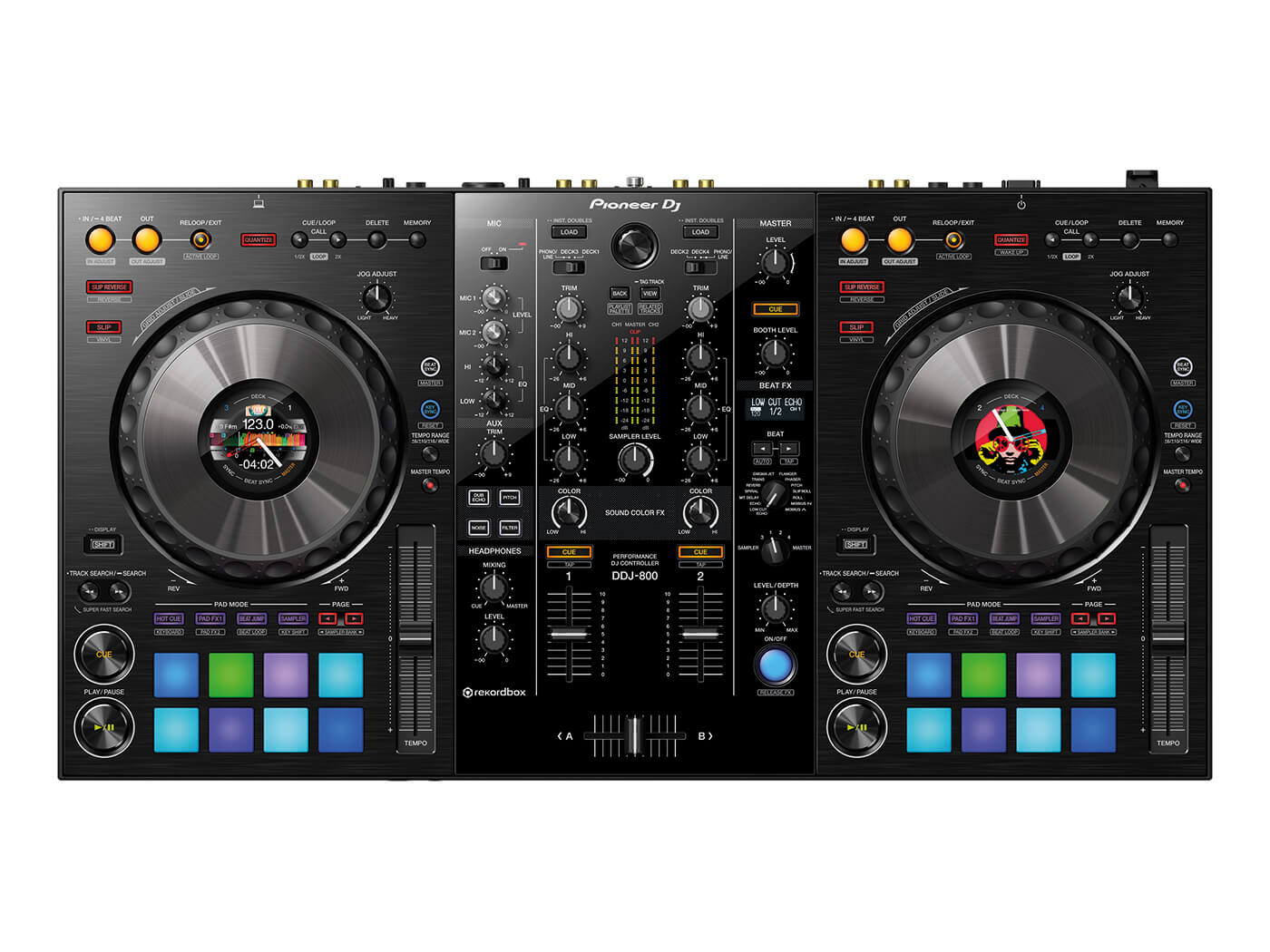 Although the DDJ-800 can be used as a standalone mixer without being plugged into a laptop, the mixer effects won’t function (presumably because they’re processed in the software rather than the hardware itself).

Fundamentally, the DDJ’s layout and controls feel very similar in use to the industry standard CDJs, which is a crucial point. It’s not such a big deal if you intend to stick to the same DJ setup forever, but the reality is that most DJs will change at some point, whether it’s when they eventually upgrade to new hardware or simply playing on another DJ or club’s setup. To state the obvious, that process is a lot easier if you don’t have to relearn a new set of controls.

The crossover of control placement and feel is a real selling point for Pioneer products, but it’s one that hasn’t always been as straightforward as you’d expect. However, it has certainly got it right in the case of the DDJ: if you’ve come to the DDJ from CDJs and a DJM mixer, you’ll feel at home, and vice versa.

There are some substantial differences, of course, but nothing that feels particularly jarring in practice. The most obvious discrepancy is the fact that CDJs all have a screen above the jog wheel for browsing tracks and viewing waveforms. It might be relatively small on the basic CDJ-850 compared to the big touchscreens on the CDJ-2000NXS2 and CDJ-TOUR1, but the DDJ-800 only has the small screens in the centre of the jog wheel, meaning you’re reliant on looking at your laptop.

On the other hand, the pads below each jog wheel aren’t present on CDJs and do genuinely add significant value to the rekordbox experience, allowing you to access hot cues, beat jump/loop, beat effects, trigger samples and so on. It’s a logical deviation from the standard CDJ layout and all the better for it.

Despite the fact that the 800 is billed as a two-channel unit, each of the jog wheels actually relates to a pair of virtual decks in rekordbox. The mixer section contains small slider switches to select the inputs for the two channels, which also include the external inputs on the back of the unit. As such, channel 1 can be switched to a phono/line input (on shared RCA sockets), deck 1 or deck 3. Channel 2 can be switched to the second phono/line input, deck 2 or deck 4. Clearly, it’s not as versatile as the ‘proper’ four-channel setup of the DDJ-1000, but it’s a good compromise; if you really wanted to do multi-deck mixes, you’d go for the DDJ-1000 as a matter of course.

It’s worth noting that rekordbox DJ is part of a larger, continually expanding ecosystem for Pioneer DJ. If you plug turntables into the phono inputs, you can add digital vinyl functionality via the company’s own control records and rekordbox DVS Plus Pack (around £100 to purchase outright). Pioneer DJ is also beginning to push other new aspects of its DJ tech ecosystem, including the cloud-based social platform Kuvo and monthly rekordbox subscription plans. Of the latter, the most relevant is the Base Plan (around £10 a month), which adds DVS functionality and additional effects. 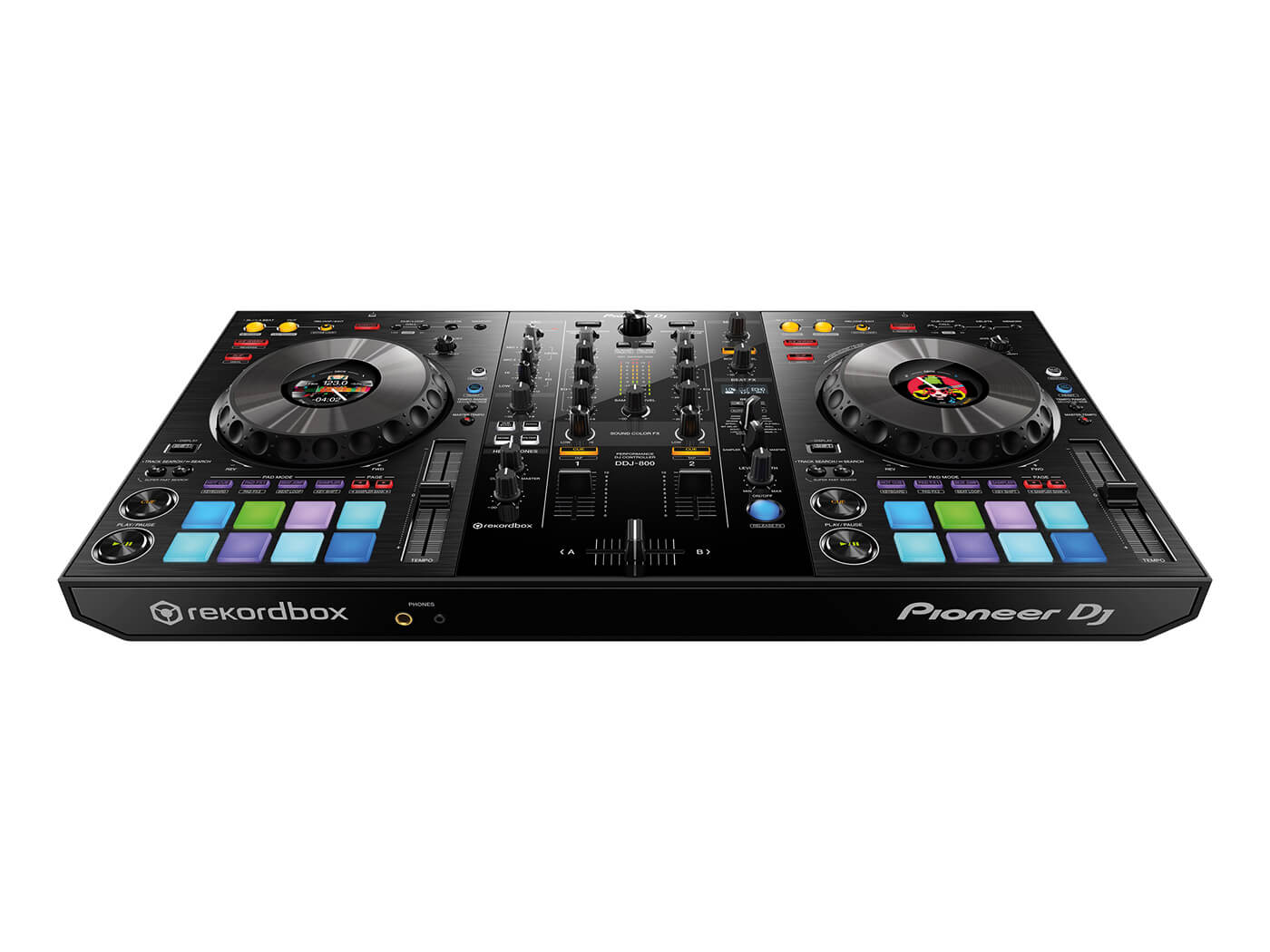 The biggest real question mark over the DDJ-800 is whether its strongest competition might come from elsewhere in Pioneer DJ’s own product range. There’ a telling line in the second paragraph of the press release for the 800, in which the company is keen to stress that the DDJ-1000 has ‘earned a strong reputation with professional DJs who perform at weddings, parties, and events outside the club environment’. Ultimately, it feels as though this is the target market for the DDJ range: DJs who play out as a self-contained unit, turning up with all their kit, setting up, playing all night from a library of music on their laptop, then packing up and heading home.

It may be a little unfair to criticise the DDJ for not offering something it doesn’t set out to do, but the lack of USD/SD slots and reliance on a laptop does mean you’re a bit limited in certain scenarios. However, a very tempting option might be the XDJ-RR, a unit which is capable of standalone operation as well as functioning as a rekordbox controller. It’s a good bit more expensive than the DDJ-800 at £1,099 and it offers a slightly different featureset, but its USB-based setup might just make it worth the extra. With that in mind, it’s worth pointing out that the DDJ-800 really does offer good value for money; £779 wouldn’t come close to covering the cost of a pair of XDJ-700s, let alone a pair of the most basic CDJs. With either of those options, you’d still need a mixer, too.

The DDJ requires a laptop, which does admittedly increase the total cost of entry, not to mention the overall size and weight of the package you’ll need to drag with you if you’re planning to gig with the setup. But as a package, it’s a compelling and serious option for anyone looking to make a fairly serious commitment to DJ tech.

There are, of course, decent rivals from other brands, but the premium you pay for going down the Pioneer DJ route is partly justified by the fact that it allows you to hone skills which transfer to other products in the brand’s industry-standard range. A very solid option indeed.

25 years ago, if you wanted to be a DJ, the default answer was to buy a pair of vinyl turntables (ideally, Technics SL-1200s). The arrival of CD decks in the 90s changed everything. Pioneer’s CDJ range eventually became the industry standard (although brands like Denon and Reloop also offer interesting alternatives). Somewhat ironically, CDs themselves went out of favour with DJs a long time ago; Pioneer CDJs now read files from USB sticks or SD cards, while the players in the XDJ range are effectively CDJs without a CD transport (other XDJ units offer standalone operation, with a built-in mixer). 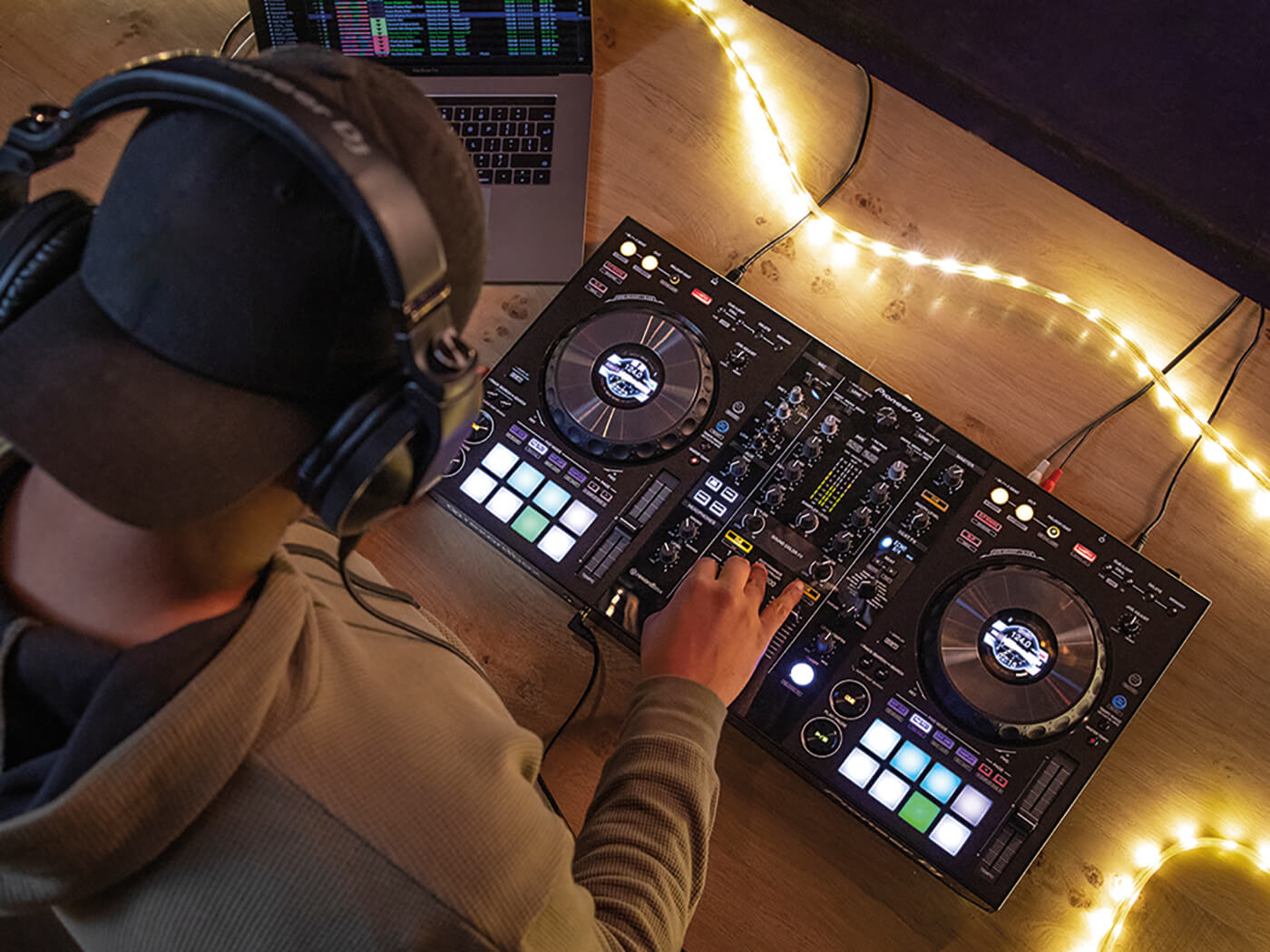 Software represents a third approach, with packages such as rekordbox, Serato and Traktor capable of being controlled by a dedicated hardware unit like the DDJ-800, control vinyl or even CDJs. Which is best? That depends. It’s really a case of picking the option that suits your personal needs and budget. 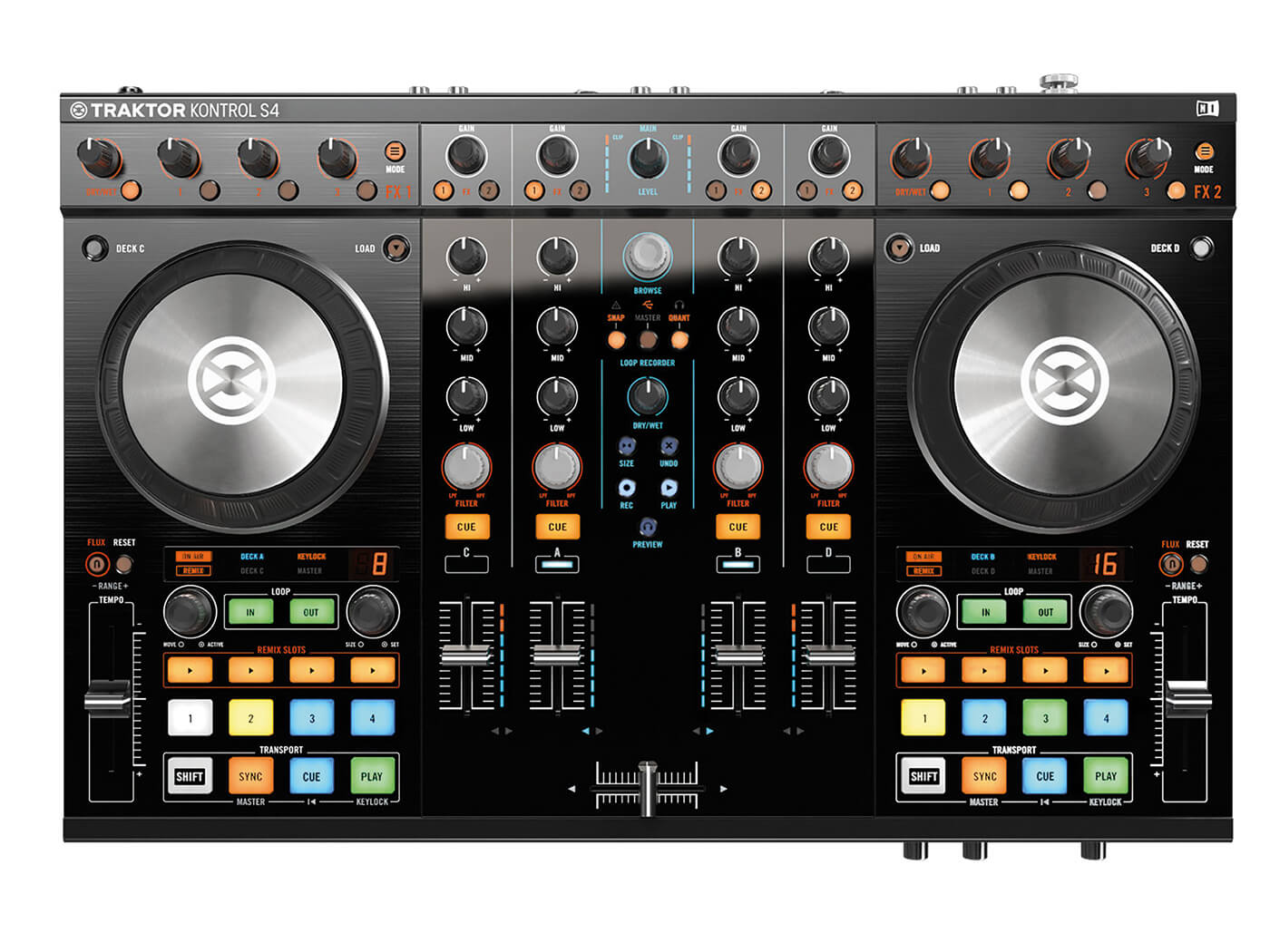 NI’s four-channel offering is certainly good value in comparison to the DDJ, but the reality is that Traktor feels quite different in practice, so you’re committing yourself to NI’s system. Certainly not a bad option, but not a decision to be taken lightly. 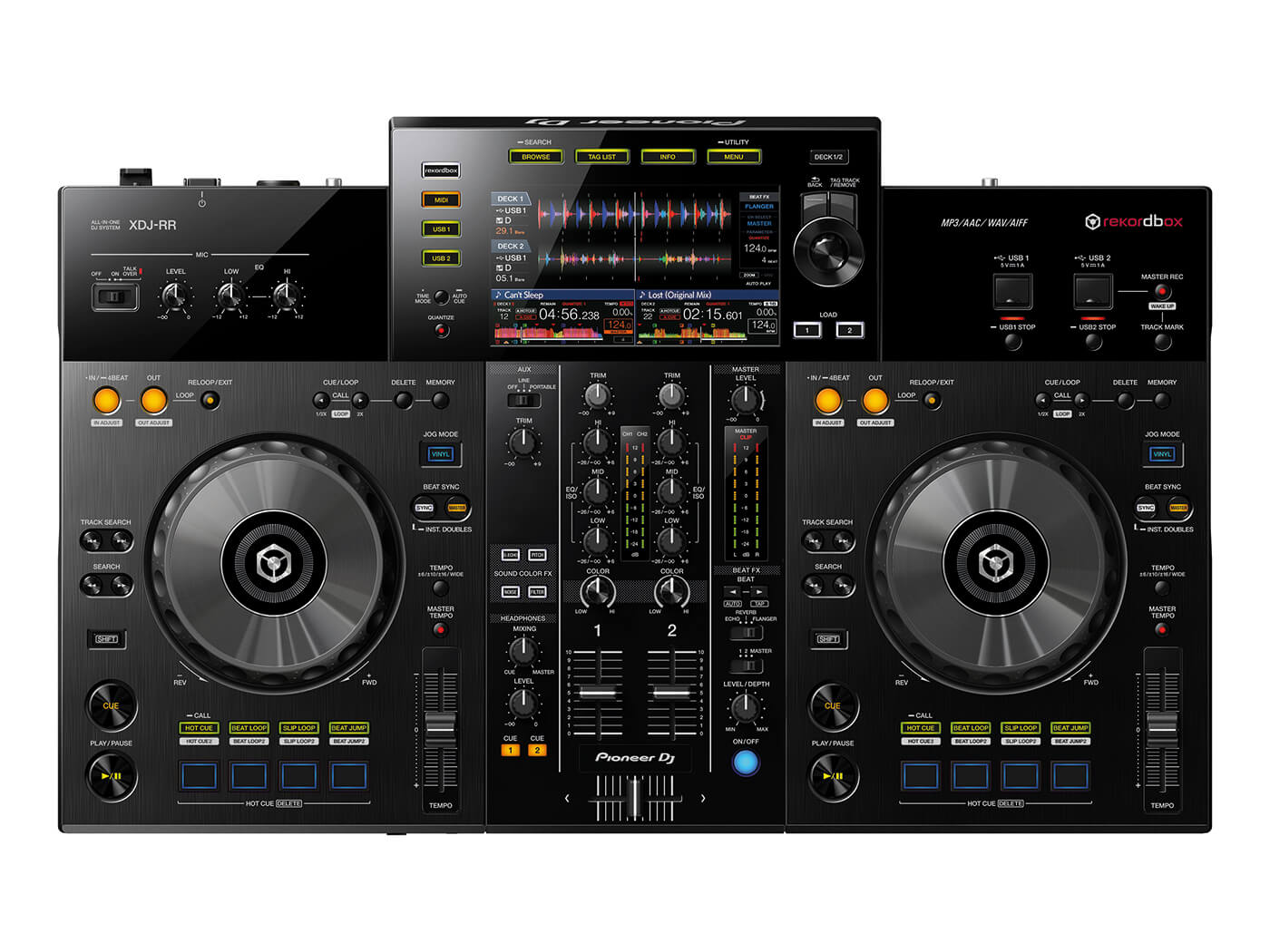 Take your pick from alternatives in Pioneer’s own extensive range. Multi-deck mixers and even scratch DJs will almost certainly prefer the more expensive DDJ-1000, but we’d also be very tempted by the USB-based XDJ-RR, which may be a better option for some users.