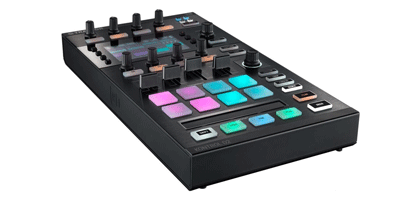 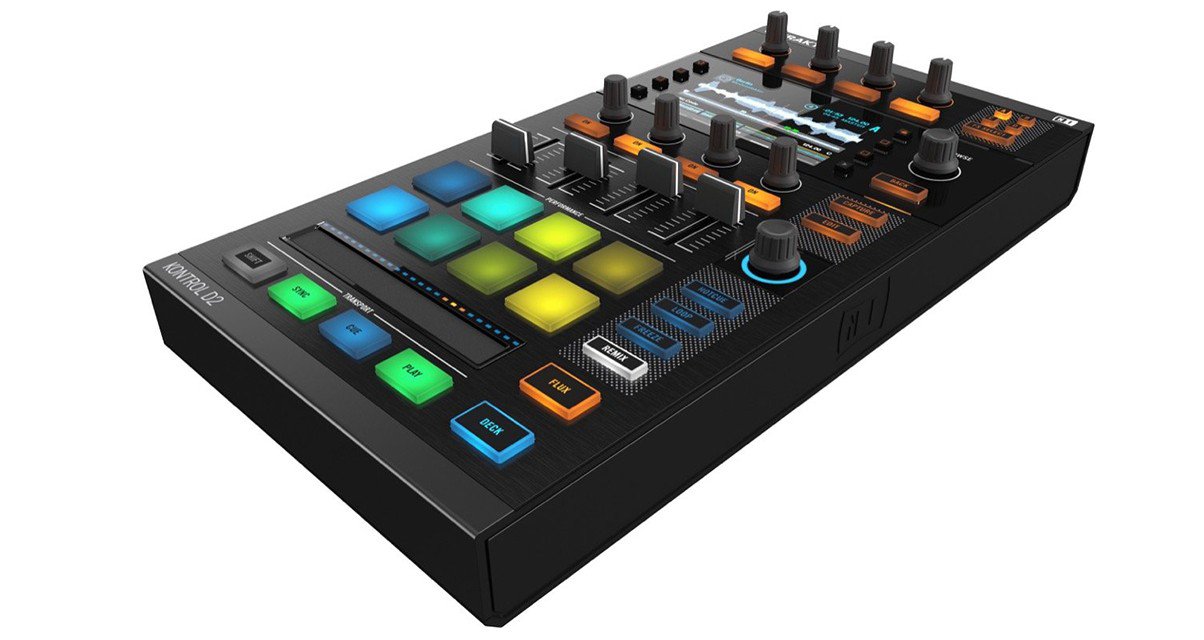 Native Instruments made quite a splash last year with its new flagship S8 Traktor controller, which introduced touch-sensitive controls, full-colour screens and touch strips, as well as containing a full audio interface and mixer. Some of that same technology has now found its way into the D2, a smaller model that is a controller for Traktor rather than an audio device, but retains virtually all the great new controller stuff from the S8.

If you compare the two devices, the D2 is basically one of the control sections of the S8, separated off and with some minor differences. 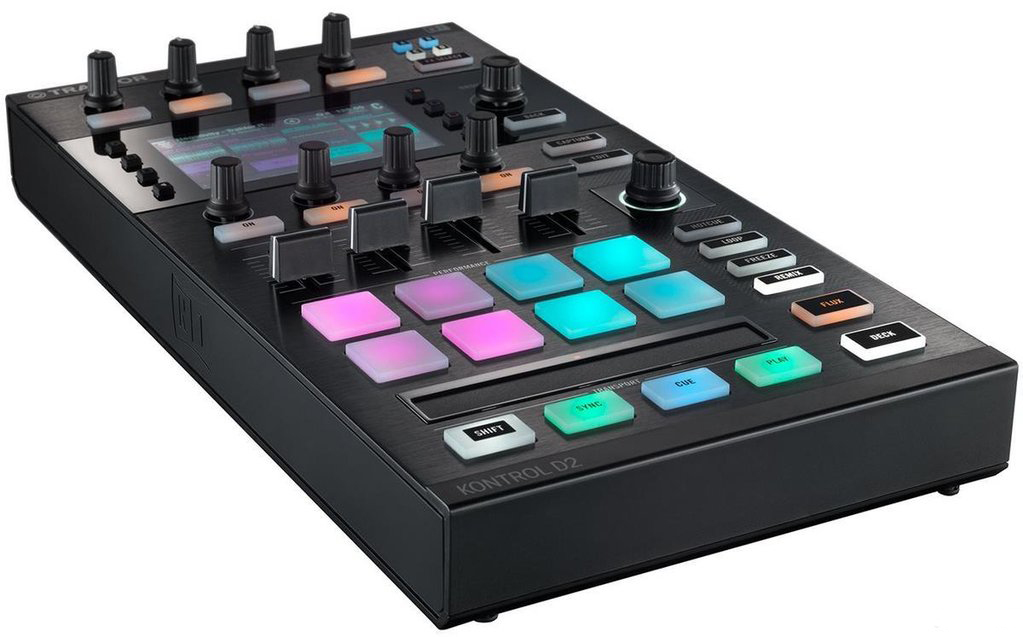 Loading Up
The D2 comes with Traktor Pro 2 and shares the look and feel of all NI’s recent Traktor hardware. There are extendable feet that can be used to prop it up or raise it to the height of a mixer: since it’s a controller, you will need to provide your own mixer. On the back is a power input to connect the bundled PSU, a USB connection to your Mac or PC and two further USB ports that can be used to connect a second D2 and play the two in sync.

The controller is automatically detected by Traktor, and you can make tweaks to its behaviour using the software preferences, such as control sensitivity and touch actions.

The large colour screen provides tons of feedback, and as with the S8, uses windows and sections that slide in and out of the screen, plus a series of buttons to control navigation.

The large Browse button can be used to navigate your music library and load tracks, and the Deck Select button enables you to navigate between decks. The screen shows you what’s going on – and in surprising detail. NI’s familiar colourful waveform display gives you plenty of feedback, and the transport controls at the base – like the other controls – are large and backlit for easy recognition in live performance environments.

Scratch This
The touch pad replaces the CD-style jog wheel you used to get. It can be used for navigation and scratching, and though it may take a little getting used to for turntablists, it works very well. Crucially, it saves a lot of space.

Above this is the performance section, with eight pads for the various modes. In Freeze mode, they can be used to play slices of a frozen loop like a sampler; in Flux mode, they let you jump around a track organically; and in Remix mode they are used to trigger slots in remix decks. In this mode, the four faders are also used to control remix deck levels – and this section will also let you work with Stems, though NI’s new audio format hadn’t been released at the time of writing.

You also get capture controls that let you resample running tracks and edit, loading them into remix slots for flexible performance options. At the top of the unit is the effects section – with touch-sensitive dials, on/off controls and deck assignment buttons.

Choosing an effect for each slot is easy, and touch sensitivity means you can simply tap a control to see what’s loaded: you don’t have to change a setting to make the effect visible. Having hands-on control of effects with visual feedback is great, and unlocks the power of Traktor’s processors – which are otherwise much more inert when used onscreen with the mouse.

D-Natural Choice?
When a developer makes hardware designed to work with its own software, what results is generally a seamless experience, and that’s certainly the case here. It’s worth noting that the free Controller Editor application enables you to create your own templates for third-party gear, so you’re not limited to using Traktor.

The tie-in with Traktor is the real heart of the D2, though; and features such as the detailed screen, clever workflow and touch-sensitive controls, as well as Remix Decks and Flux mode, mean you’re likely to stick with Traktor, since it’s a perfect match.

It’s almost a shame that NI hasn’t included a basic audio interface, but DJs need a mixer, too, and those generally come with audio I/O, so sticking to controlling Traktor is understandable. Though you can control only one deck at once, hopping between decks is easy and quickly becomes second nature. With tight Traktor integration, great workflow and support for the upcoming Stems format, Traktor DJs will find much to like in the D2 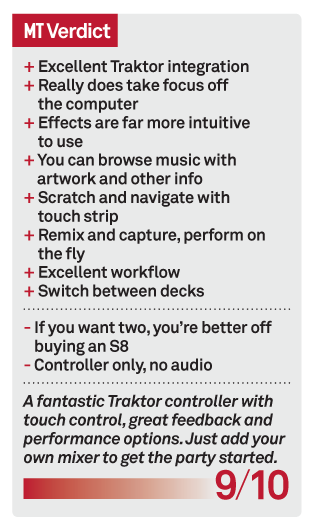