Traktor Pro 3.1 has been unleashed, almost 20 years since the very first iteration. With an enhanced UI and slicker control, has Native perfected DJ software? Dan Jefferies finds out. 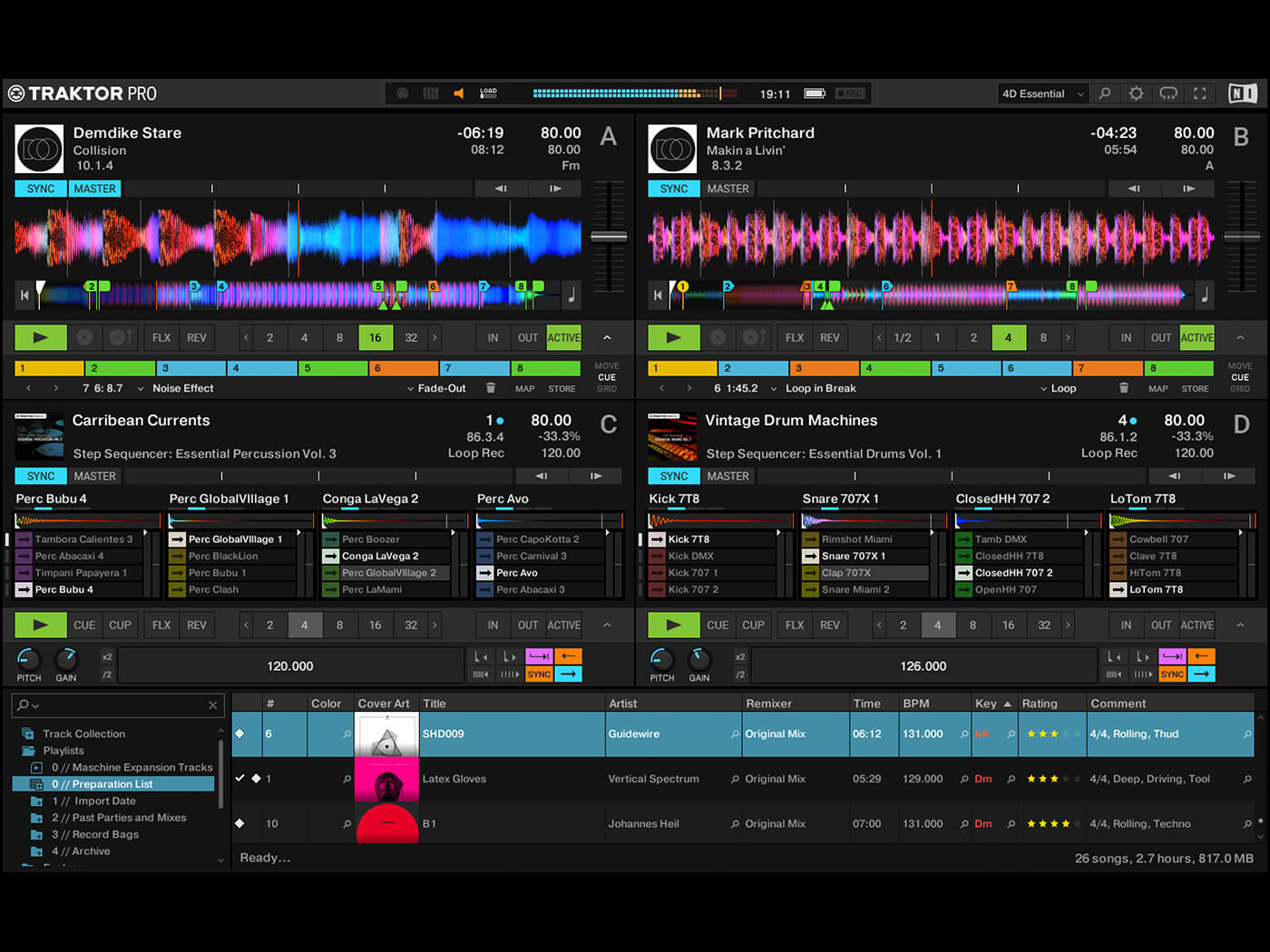 For years, Traktor Pro was the go-to DJ software of choice for many, myself included – it was reliable, rock-solid and enormous fun to use. But when I began playing live more frequently, having to take my laptop, a controller and a whole heap of aux cables quickly became a pain.

For a while, I’d been a user of rekordbox instead of Traktor. But when I was asked to review Native’s latest update, I jumped at the chance, and was keen to see what developments had taken place. Would I be surprised? Reading forums and message boards signalled a generally mixed response to Traktor Pro 3. Does it warrant being a whole new version, or is it really Traktor 2.5+ in disguise?

Open up Traktor Pro 3.1 for the first time and you’ll find that it is – in essence – the same Traktor we know and love: browser at the bottom, decks left and right, mixer in the middle and effects at the top. However, some small yet not insignificant improvements have been made.

The UI feels immediately fresher and more in line with Native’s other products such as Maschine. It’s darker, flatter and sharper in general. It’s not retina-ready, however, meaning that it won’t take full advantage of high-definition screens. It’s not a deal-breaker, but it’s worth noting. 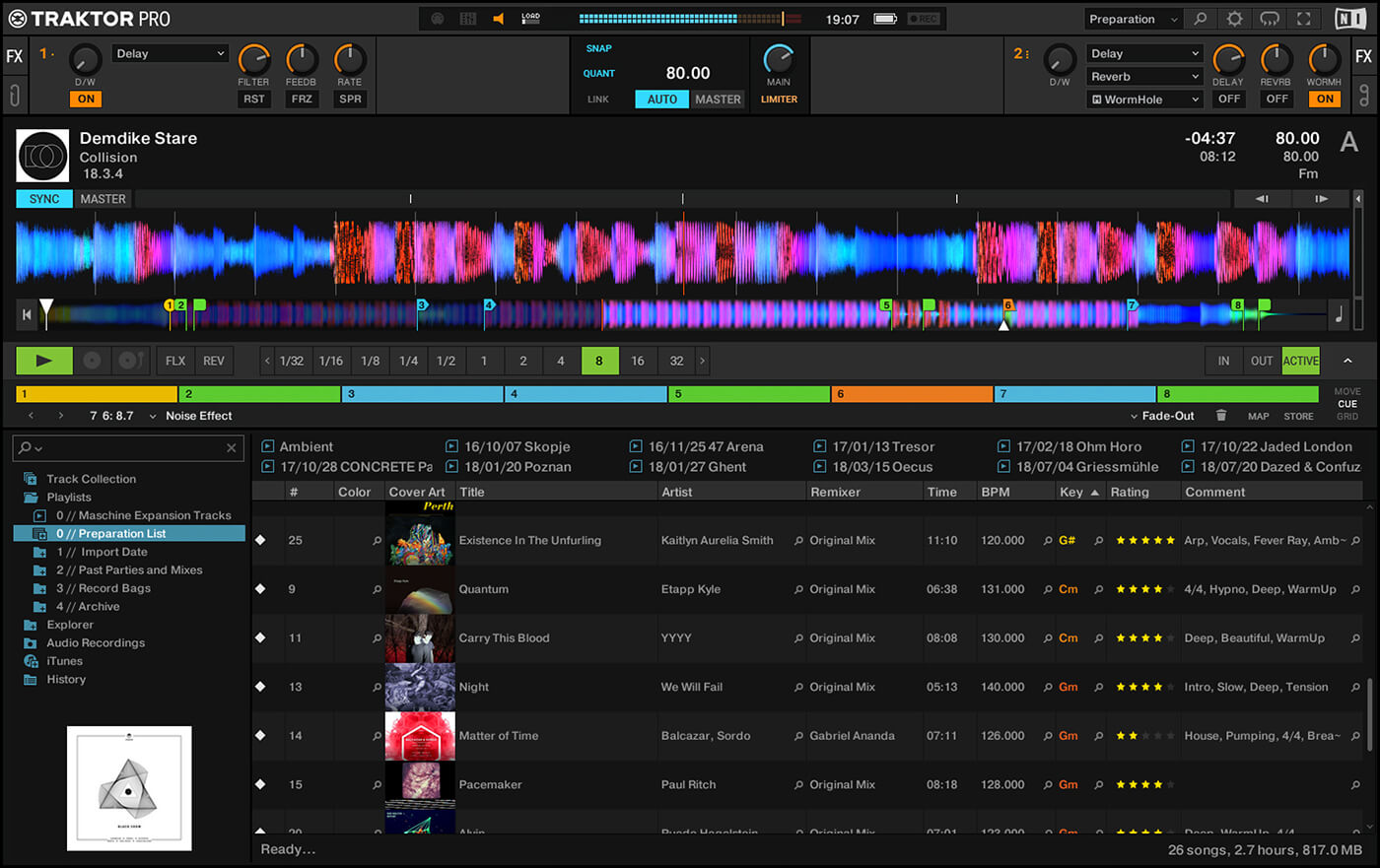 I’m very impressed with the Signposts: these are little indicators that provide the key bits of information you need when you’re deep in the mix. Take the Mixer FX, for example (more on these to come). When you change from Filter to, say, Noise, the colour of the knob changes too, and it’s a different colour for each effect. This should help you to quickly spot which effect you’re using and change as appropriate. It’s simple but effective.

As well as this, the layout feels far less cluttered and easier on the eye. The Cue, Cup, Flex and Rev buttons look bigger and easier to activate. The Hot Cues are also far more visually appealing, appearing as nice big blocks of colour which are each easy to recognise in terms of their purpose (Grid, Loop, Cue etc). And speaking of colour, the colours used in the track waveforms look more beautiful than ever.

Using Julian Jeweil’s Mars as an example here, there’s a real sense of where the energy lies and – as the track builds to its drop – you’re shown subtle yet informative colour changes. It’s a visual feast. Plus, users can now – at last – change the view of the waveform layout to full Parallel view. This basically takes the existing waveform layout and places two larger versions at the top of the screen. 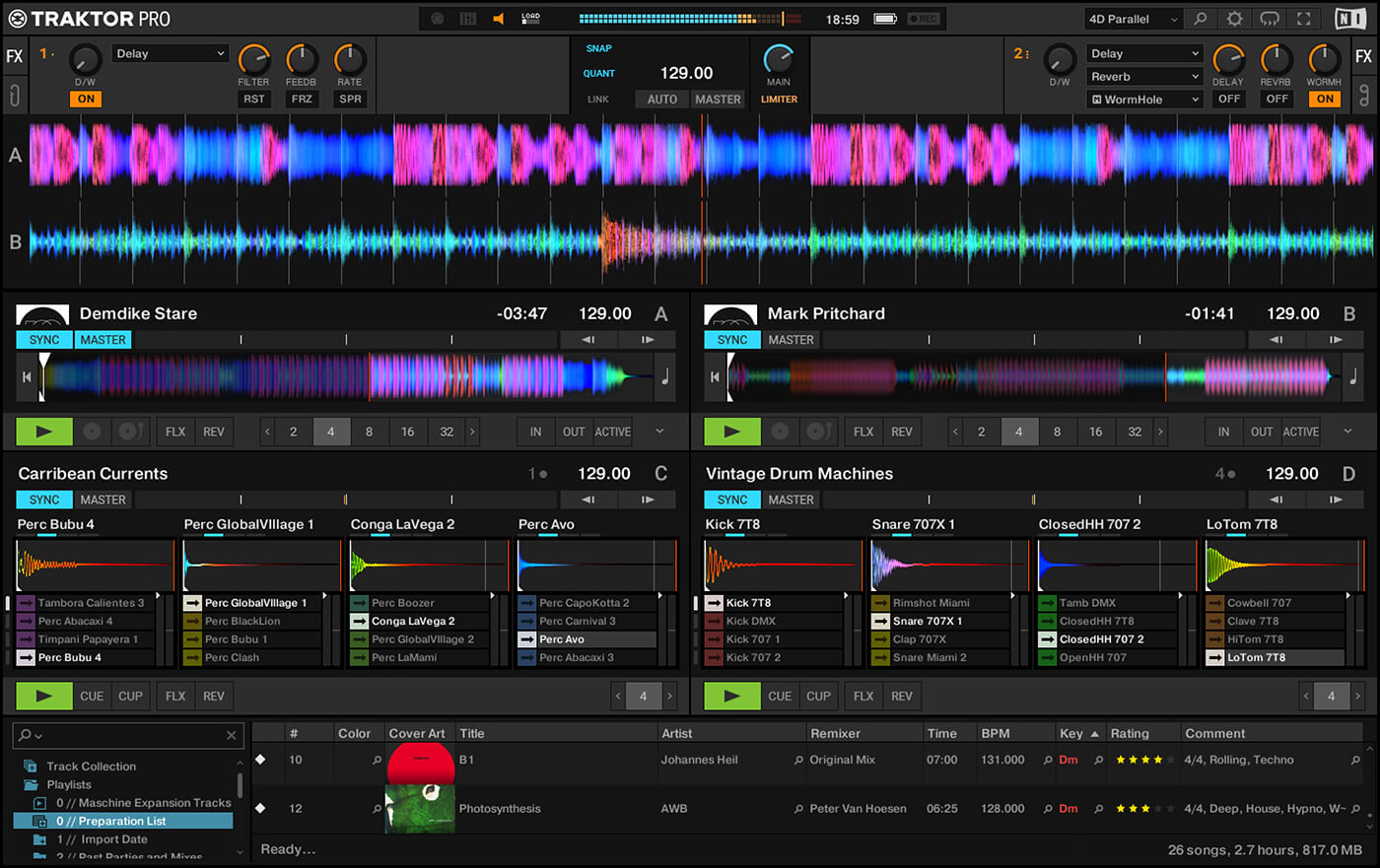 You can zoom out to quite a distance so you get to see most of the track as it progresses, or you can zoom right in until you get a blur of waveforms. It’s a welcome addition that brings it in line with both rekordbox and Serato, although you could argue this should have been introduced some time ago. These parallel waveforms becomes more effective when you work with four decks, stems or remix decks. It’s a lot of information to take onboard, but give it a bit of time and mixing with these larger waveforms will become second nature.

The final observations on the user interface are the improvements to both the CPU load and output levels. These are much cleaner and easier on the eye, as are the individual deck levels. The centre display panel that shows Snap, Quantize, Link and the Master/Audio tempo have more prominence, and rightly so; they’re key components.

Audio quality is of course a key feature of any DJ software. And the first notable upgrade is that Native Instruments has licensed the latest version of zplane’s Elastique Pro V3 time-stretching and pitch-shifting engine. While this might not be as ‘creatively’ exciting as some of the other developments here, it’s a big deal in terms of audio quality, especially if you’ve got Key Lock engaged. And it really is noticeable: comparing Traktor 2 and 3 with a track pitched down to 30 per cent and beyond, the difference is quite stark: the sound is far less gritty and grainy and much more pleasant on the ears.

Up to now, if you wanted to apply effects to your mix you had to use Send 1, Send 2 or both. This worked fine, but could be a bit fiddly if you just wanted to quickly apply some delay or crushing. I can’t tell you the number of times I’ve inadvertently left S1 assigned on Deck 2 and wondered why it sounded like it was in a cave. 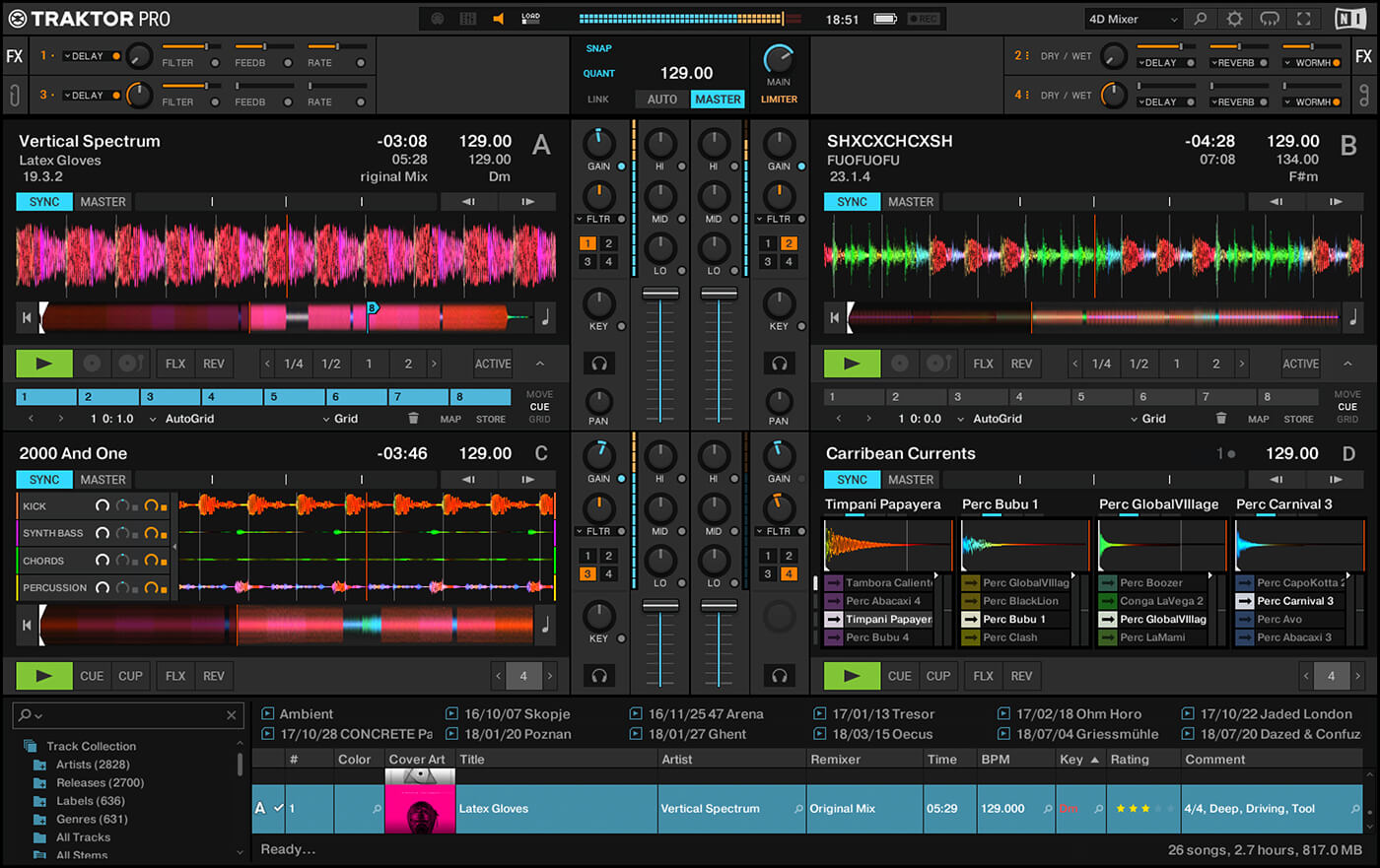 NI has now introduced a useful feature where you can change the Filter knob in the mixer panel to four alternative effects. These are: Reverb, Dual Delay, Noise, Gater, Flanger, Barber Pole, Dotted Delay, Crush, and of course, Filter. They’re a hugely welcome addition and not dissimilar to Pioneer’s Sound Color FX. However – in practice – they sound more usable. Ever tried to add noise on a Pioneer mixer? It’s like putting the club in a wind tunnel. These effects feel far more subtle, yet still pack a punch –  the Dotted Delay is particularly sexy.

Whether you’re a professional or bedroom DJ, you’re likely to have a DJ controller of some sort. Native Instruments has improved the functionality of its S2 and S4 MK3 models by adding the ability to map specific controls to perform alternative functions. So if you don’t ever use that Quantize button and instead want to map it to record your mix, you now can. Simply go to the Preferences, access the Controller Manager, hit Learn, press your button and then assign the new control.

This opens up a whole world of possibilities for Traktor-related hardware owners who can now configure their equipment to their needs. This could be done with a generic MIDI controller, but of course, you invariably didn’t have the integrated audio card. 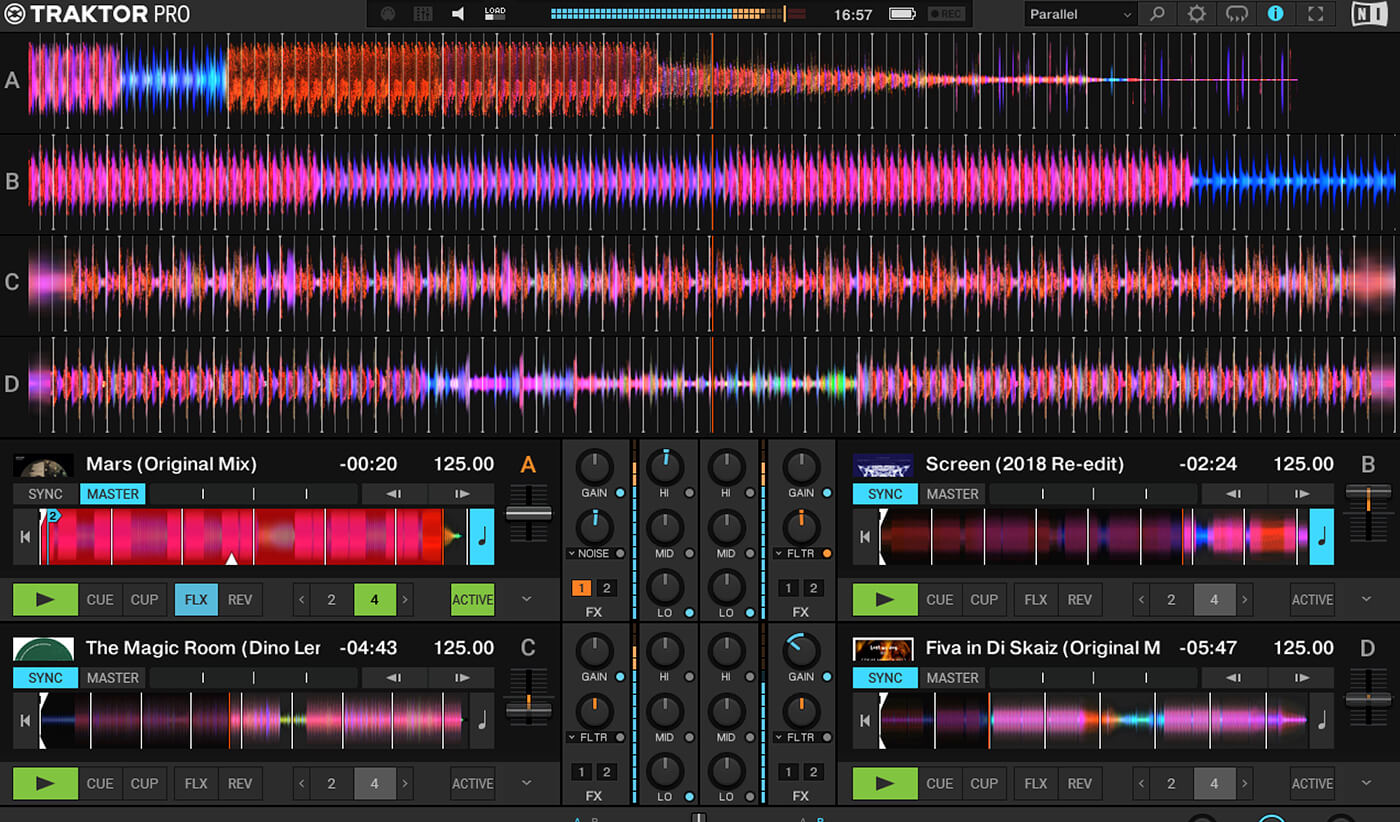 There’s also a new setting that disables scratching on the jog wheels of the MK3 units. This is a great feature if you’re someone who may only scratch once every 10 years, But by disabling this feature, you remove the risk of accidentally scratching when all you want to do is bend that pitch. Cracking.

And so we come to the one main negative in the Traktor Pro 3.1 update: the Browser, the hub of any DJ software. In an age where other DJ products, such as djay Pro 2, can import and manage Spotify playlists, how does Traktor stack up with song and playlist management?

Sadly, little has changed since Traktor 2 and perhaps really since the first incarnation. It’s pretty surprising that there is absolutely no option to create Smart Playlists, a feature that has been part of rekordbox for at least three years. I can’t deny that I miss this feature. It’s just so handy to be able to say, for example: “Make a playlist that contains tracks made in 2007, are between 115-120bpm and have the genre ‘House’ attached to them.” Click save, and boom – there they are.

I have my entire song collection organised in to a myriad of different playlists, playlists that meet my every need. And I’m eternally grateful for them. And yet I find that I can’t do this in Traktor Pro 3.1. While I’ve waxed lyrical about all of the above, very appealing, features, this is the one area that I think seriously needs some love and attention, and could be a deal breaker for those DJs working with vast libraries of music. Yes, there is a workaround (it involves highlighting tracks, right-clicking and manually entering the info), but really, you would think that a DJ package where you can time-stretch music to an incredible level of detail could update the organisation of the music.

You could argue, too, that this could be simply done using iTunes, but I don’t want to use iTunes; I want to use Traktor. This gripe aside, Traktor Pro 3.1 is a substantial and slick update that will undoubtedly satisfy its large user base.

If you’re an existing Traktor user, you might be feeling a little cheated. “Why isn’t this free?” I hear you cry. But consider the amount of free upgrades you’ve received over the years and it’s no surprise that NI has now added a pricetag. If you already own Traktor Pro, Duo or Scratch 1/2, it’s £44 to upgrade. That’s a small price to pay for an upgrade that gives you all the things mentioned above, plus DVS control. I think that’s pretty good. 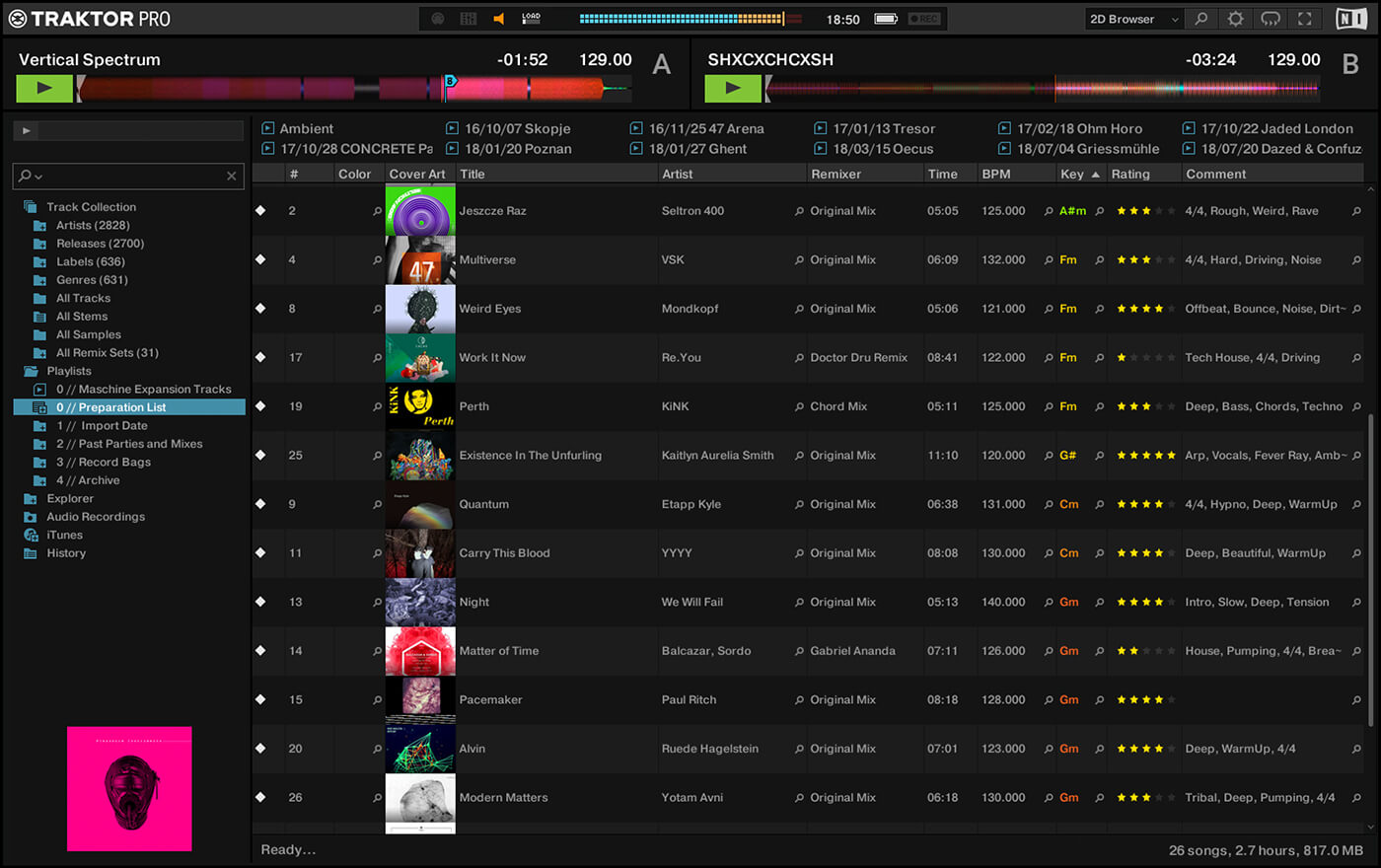 Whether you really need it may depend on how much you use it. Bedroom DJs should see the benefits, especially with the single FX that have been introduced. And if you regularly play in a bar or club, it’s absolutely worth the expenditure to upgrade. I know I’ll be getting the laptop out again and making myself a nuisance once more. 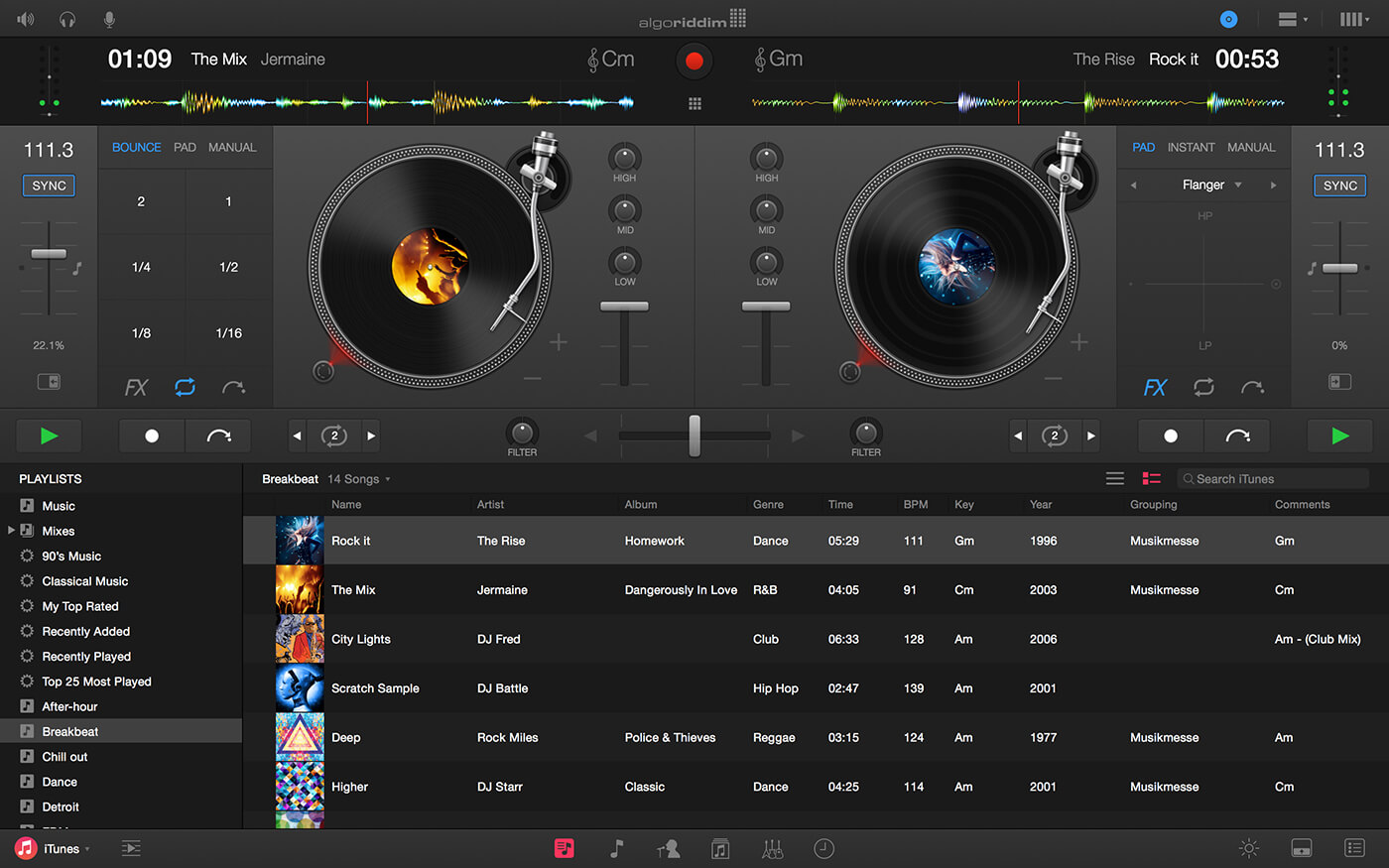 With access to the entire Spotify library (you must be a paid member and connected to the internet), Song Match mode, Automix and built-in visuals, dJay Pro 2 is a substantial hub to work from, particularly for house parties and bar sets. 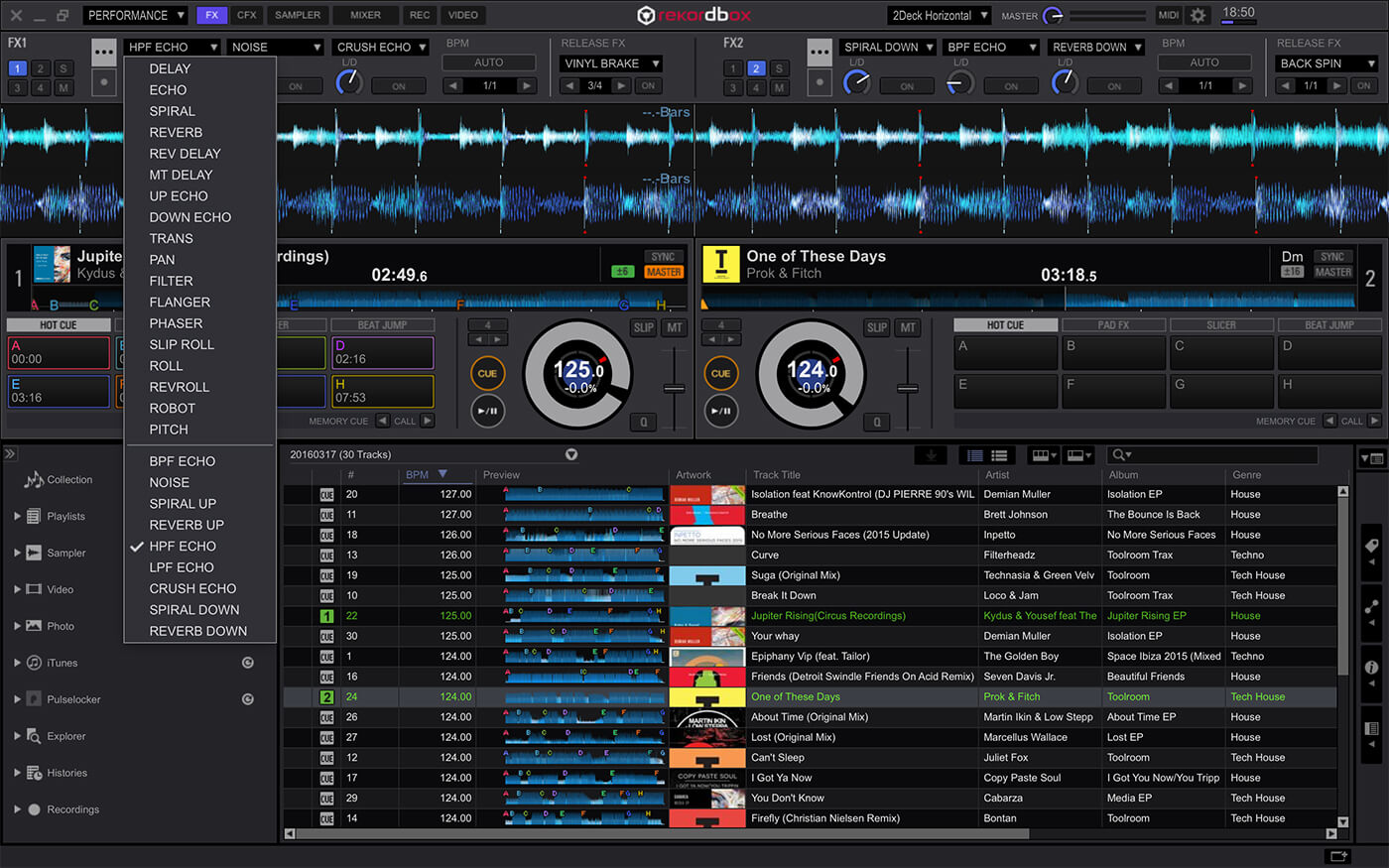 Compatible with numerous controllers and CDJs, Pioneer’s rekordbox has two versions (kind of), with one free version aimed at USB-export preparation for DJs using Pioneer’s Media Players and CDJs and one with performance functionality. Use it to manage your cues, loops, song library and playlists in Export mode or mix direct with Performance mode.