The mighty Traktor platform ploughs onwards with a new all-in-one controller and interface from Native Instruments. Hollin Jones takes the S5 for a spin… Details Price £579 Distributor Native Instruments Contact Via website Web www.native-instruments.com System Requirements OSX 10.9 or higher, Windows 7 or higher Around a year ago, NI released the Traktor Kontrol S8. The […] 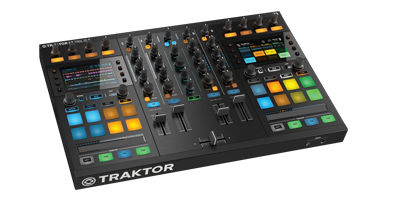 The mighty Traktor platform ploughs onwards with a new all-in-one controller and interface from Native Instruments. Hollin Jones takes the S5 for a spin… 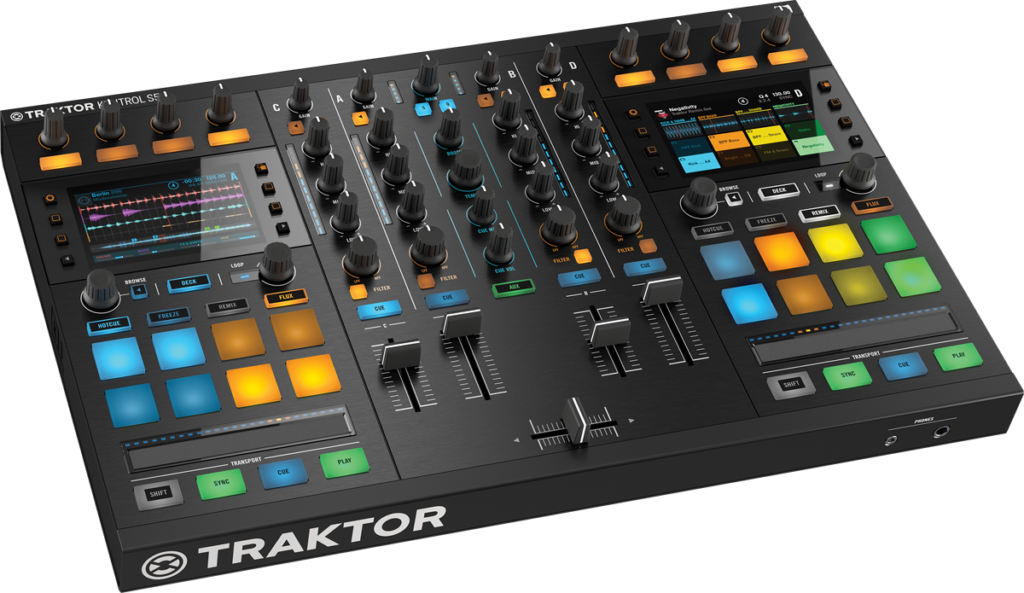 Around a year ago, NI released the Traktor Kontrol S8. The biggest and most comprehensive DJ controller they’d built, it even included full audio I/O capabilities, making it an all-in-one DJ solution.

The only thing was that all that capability took up space. Not that it was huge, but it wasn’t what everyone would call portable. Listening to customer feedback, NI realised that some users wanted a similar device but without all the bells and whistles, and easier to carry around to gigs.

The company has come up with the S5. It has many of the tools you’ll find in the S8: some modified or rearranged, but in a smaller package. It comes with Traktor Pro 2, as well as power and USB cables, and appears automatically as a controller device to the software and as an audio I/O device to your Mac or PC.

You get two decks, each with a deck select control allowing access to up to four as in the software, and a mixer section in the middle. Weighing 3.7Kg, it’s surprisingly lightweight but as solid as we’ve come to expect from NI.

Hook it Up
The S5 is designed to act as your audio in and out device as well as a software controller, and has a good selection of ports. On the front edge is a headphone output with both mini and regular jack options so you won’t have to bother with adaptors. 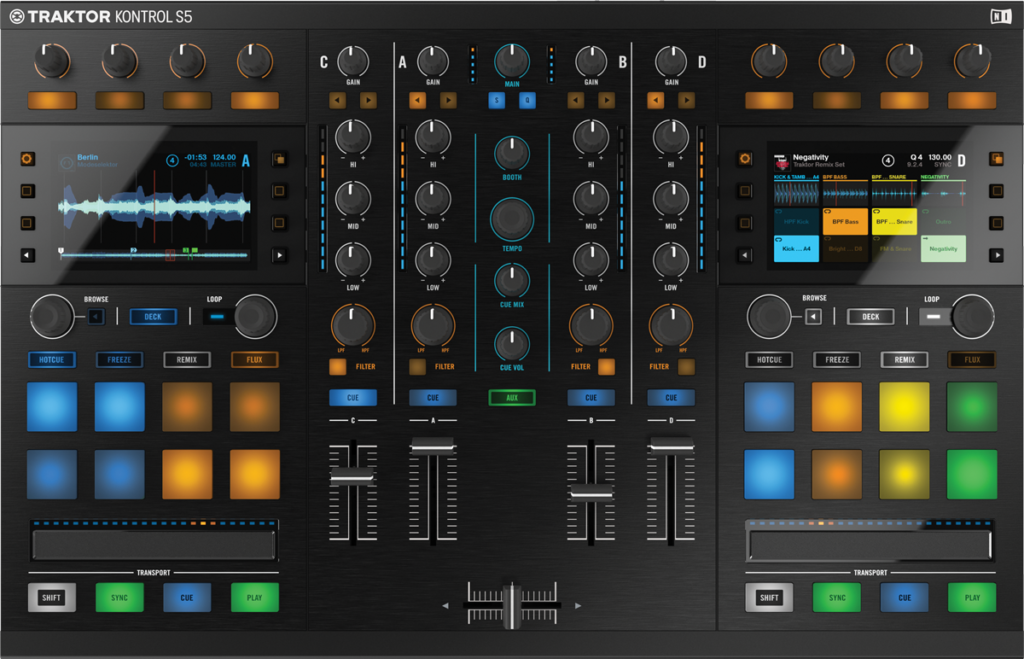 On the rear, the main outputs can be sent either via dual XLRs or RCA outputs and there are stereo jack outs for a booth feed too. As for inputs, there’s a mic input jack and aux left and right inputs for connecting external sources. A USB port handles audio and MIDI to and from your computer.

In terms of sound, it operates at 24-bit/48kHz and allows for four-channel mixing from the Traktor software. The mixer section has level faders for each of the four decks, as well as a crossfader. Each channel then has identical controls comprising cue on/off, switchable filter, three-band EQ, level meter and a gain control. In the centre, you can control master, cue, booth and cue mix volumes as well as tempo, and there are small master level meters. As a mixer, it’s easy to understand and colour-coded backlights make things simple to follow.

Each deck has a set of controls, starting at the top with touch-sensitive effects knobs. These can be touched to reveal settings and modified to select and change effects. The high-resolution screens are crucial to performing without looking at your computer, and they work brilliantly. Controls to either side let you choose what you view and edit as well as seeing beat grids, track names and other information. The Browse and Loop buttons are also touch sensitive, invoking the relevant view with a simple tap.

Mash it Up
Below this is the Performance section, a grid of eight pads per deck, used for various tasks, depending on which mode is active: hotcue, freeze, remix or flux. In fact, these now extend to controlling Stems, NI’s new four-track file format. The pads automatically map to Stems when a Stem file gets loaded and you can mute, mix and add filters and effects to Stems with the pads and encoders to remix your music in real time.

Performing using Freeze, Flux and other modes is also slick and intuitive. You don’t need to be an expert to use this stuff, though there’s potential for very complex performances. The touch strip handles navigation, scratching or needle drops depending on your mode, and the transport controls at the base deal with playback. A Shift key allows access to certain secondary functions, making up for the slightly smaller number of physical controls on the S5.

Got 5 on it?
The S5 is perfect for those who want the combined controller and interface function of the S8 but in a more compact package. You get slightly fewer physical controls and smaller I/O, and there’s no standalone mode for the mixer, but this is still enough for all but the most demanding DJs.

Crucially, it’s another into NI’s Stems world and has the amazing ‘hands-off’ workflow that comes with the visual feedback system, touch-sensitive controls and integrated audio interface. You can do far more with it than using the mouse and a copy of Traktor on a computer. For a lot of DJs, this will be the perfect balance of power and portability. 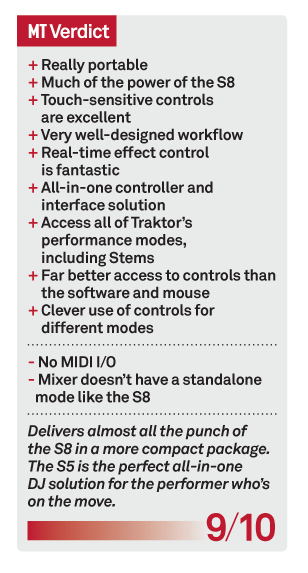