Here’s an exclusive MusicTech.net review of the newly released Native Instruments’ TRAKTOR DJ  app for iPad. By Liam O’Mullane: Manufacturer: Native Instruments Price: $19.99 Contact: via website Web: www.nativeinstruments.com Amazon.co.uk Widgets TRAKTOR PRO for Mac or PC, is without a doubt, one of the leading pieces of DJ software on the market. It’s Traktor’s feature […] 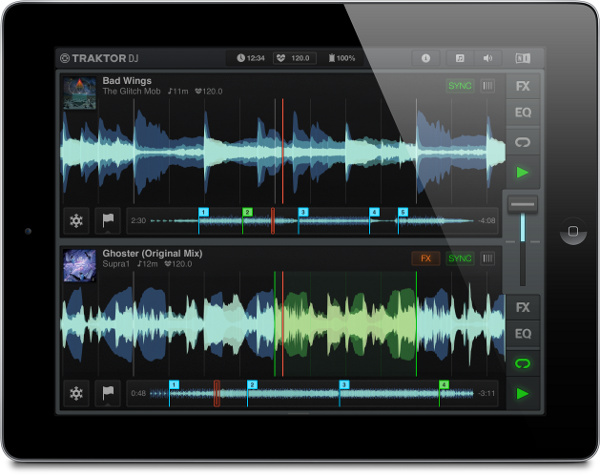 TRAKTOR PRO for Mac or PC, is without a doubt, one of the leading pieces of DJ software on the market. It’s Traktor’s feature set that has been the main driving force for its growth in popularity over the years. This has then been boosted by the more recent release of dedicated hardware controllers with built-in audio interfaces; offering an all round DJ solution. Because of this legacy, TRAKTOR DJ arrives with huge expectations. But NI haven’t simply taken the feature set of TRAKTOR and crammed it into an app, they’ve instead, re-thought various aspects of how you can/should control audio on a touch based device.

In the shrinking process from TRAKTOR PRO to app, certain things are not included, at least not to the eye. There’s no pitch control to be seen, but users of TRAKTOR PRO will know that unless you’re mixing with decks and timecode (which will have you using their own pitch controls), the onboard pitch control in TRAKTOR is a mostly redundant feature for modern DJing. The same beat grid system is used as TRAKTOR PRO, so any issues with syncing can be manually adjusted while you mix. BPM can be entered with a tap tempo function if it’s miss-calculated, but of the hundreds of tracks we tried, very few needed adjusting.

You’ll notice there’s also no buttons for controlling loop divisions either. Instead, loops are controlled by a two finger action when placed on the waveform. You determine the starting length by the distance between both fingers and can then increase or decrease its length using expand or pinch gestures. An intuitive way to implement touch control

The app is fixed to horizontal orientation and waveforms are displayed across the screen. The zoomed waveform is for touch based manipulation and the overall waveform below, allows quick navigation and control over the zoom amount. The FX and EQ buttons to the right are an ample size for quickly opening up their relevant window. These windows then appear over the waveform but with just one of them open, you still have access to touching the waveform on the other side. With both FX and EQ open, you won’t see the waveform anymore, but you can still use the cue point functionality underneath for maintaining control over your mix.

Another, well implemented area of touch control is being able to control an effect, EQ, channel fader or filter in-real-time while opening the library browser with a second finger. This continues to give you control of the initial parameter with the first finger, meaning you can manipulate  a track while loading up the next for the opposite deck. You can even begin to mix in the next song while continuing to manipulate the other track; a great way to be creative with mix transitions and ideal for mash-up mixing. 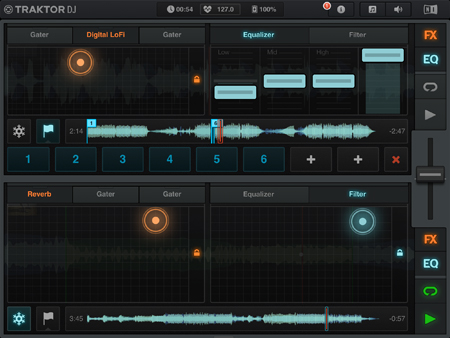 When you’re using the effects windows on the left, the deck information disappears. So instead of closing the window to gain library access, you can also drag up the bottom of the screen.

During our tests the app performed very well and although we chose to mix live with no preview of the next track to mix. Tests using the cue/mix headphone split option worked well enough, but you would need to sacrifice stereo by running the live mix through one side of the headphone output. We’d say this is a house-party type of option, as the sound quality and lack resistance to interference from the headphone port just isn’t pro-spec. Alongside NI’s Audio 6 and 10 interfaces, the company state that any class compliant audio interface should work with the app via the iPad Camera Connection kit.

Although the app is quite well featured, the speed at which it all becomes familiar is a testament to the time NI have obviously put into this app’s design. We can see a new generation of mixing techniques being born from this apps features and NI have stated that this is just the start; they intend to improve on the features over time. Perhaps we’ll see an iPad/hardware hyprid set-up in the future?

We love it when something comes along and changes the game as we know it, and for DJing, this is it! Asides from some minor elements that we expect to be picked up in updates, this has set a new standard for how touch-devices can offer something different for audio control and manipulation.