Can a raft of new features and a port to the Windows platform help raise the profile of Digital Performer? Hollin Jones finds out in our Digital Performer 8 Review   Details Price £349. Upgrade from previous version of DP £150 Contact Musictrack 01767 313447 Web www.motu.com Minimum system requirements   Mac OSX 10.6.8 Windows 7 There […] 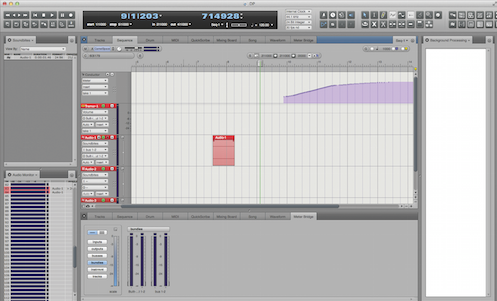 There are a fair few DAWs around these days, the vast majority of which are supremely capable, handling every aspect of the music production process. MOTU’s Digital Performer hasn’t always grabbed the lion’s share of headlines, due in part perhaps to the fact that it has for much of its life been a Mac-only application and for a long time preferred its own plug-in format, MAS, over the more widely available VST and, later, AU. More recently, however, it has seen significant changes to its interface, and with version 8 comes to the Windows platform for the first time, which is likely to increase its appeal. It’s aimed at users of all levels and, indeed, has been a favourite among some pros for many years, though MOTU seems to have been actively improving it, with an eye specifically on enticing new users.

Plug and Play
DP8 is available as a download or boxed and there’s a fully functional 30-day trial available with no dongles or extra hardware required, simply an internet connection for server activation. It needs an Intel Mac running OSX 10.6.8 or higher, or Windows 7 or 8 and is 32- and 64-bit-compatible depending on your system. Its own plug-ins are in the MAS format but it can also see VSTs, and AUs if you’re on a Mac.

Plug-in management is undertaken in the Preferences, where you can also set up myriad other parameters in a way that’s clear and uncluttered. And there’s a lot of handy stuff to be found, such as the ability to automatically analyse audio for tempo and control how imported files are converted.

DP’s interface is particularly nice – a sleek and carefully thought-out system that cleverly manages windows using resizeable tabs, maximising the amount of real estate available to you. It also gets the level of iconograpy about right, providing many controls onscreen but without overloading you with symbols or information. The default look is a muted grey but there are Themes: multiple graphical setups that can be switched between on-the-fly and customised. This is more than window dressing, and provides nice-looking alternatives while maintaining usability. The idea is that you might like to work using one theme but when showing a project to clients, switch to a more ‘pro-looking’ one.

In terms of usability, DP strikes a good balance between feeling like a serious piece of kit and not scaring you away. It’s arguably more approachable than Logic or Pro Tools while still feeling like something that wouldn’t be out of place in a top-end studio environment.

Beneath the Bonnet
Technically, DP is a real workhorse, with track, voice and plug-in counts limited only by the capacity of your hardware. There are up to 99 stereo busses available and a patching system for routing signals between your hardware and the software. You get lots of bundled effects and instruments – more on this shortly – and bread-and-butter stuff such as full automation, audio comping, scoring, MIDI plug-ins and plug-in chain support as well as some nifty extras like V-Racks, which make a single instance of an instrument available to all sequences in a project.

Digital Performer lets you manage multiple songs or sequences within a single project, which is especially useful for live work. Tracks can be grouped to control multiple parameters across a project at once, and there’s step MIDI recording and the intriguing POLAR loop recorder for quickly building up multi-layered takes then exporting them into a project.

If you’re a die-hard Windows user you may be looking at DP8 for the first time, in which case MOTU’s website has an exhaustive rundown of what it can do. For existing Mac users, there’s much that’s new, including 15 new themes and 17 new plug-ins, bringing the total to 84. The new Dynamic EQ provides excellent control over the frequencies of a track, and Precision Delay lets you phase-correct recorded material with just a couple of clicks, helping to remedy issues with sources that have been recorded using two or more mics. The Spatial Maximizer provides control over the middle and side portions of any signal, which is great when mastering for vinyl and for more general shaping of the stereo image of a track.

A new de-esser can effectively remove sibilance from vocals, speech and other sounds, and Subkick is a clever new plug-in that is able to add configurable synthesized sub-bass tones to kick drum tracks by analysing sounds in real time and adding the requisite amount of punch. Ensemble Chorus lets you create richer vocal parts by adding tweakable extra voices, and there’s also now the ACE-30 guitar amp simulator to add Vox character to guitar.

There are other new guitar processing tools too, including the Soloist – which models a 1990s Mesa Rectifier amp – and Live Room B, a physically modelled bass guitar speaker cab with multiple, moveable mics. It also has a smaller cousin, the Live Stage, for more CPU-efficient performance in a live arena. Other new guitar pedals, like the Analog Delay and Flanger, Clear Pebble and Dyna-Squash, contribute to a comprehensive guitarist’s toolkit.

On Guard
Elsewhere, those working in other ways will also find some great new features. The new Punch Guard system, for example, captures a few seconds of audio before and after each punch in/out and this can be revealed if you find you have started recording too late or stopped too soon. Video support is excellent, with a re-engineered video engine now supporting full 720 or 1,080 HD video in a variety of display formats, from an integrated thumbnail window to external displays or even several monitors at once. Movie audio doesn’t have to be split off into a project, and can be routed flexibly into DP’s mixer for processing using plug-ins, making integration of multiple film sound channels into a project much easier. Plug-in and preset management is now much simpler too, with dedicated windows letting you enable or disable plug-ins or create your own custom sets simply and easily.

Perfect performance?
DP8 is a remarkably powerful DAW that deserves more attention than it has appeared to get in recent years. Perhaps the addition of Windows support will help with this, and PC users will be able to take advantage of what is ultimately a very elegant and slick music-production environment. There’s a lot we haven’t got space to detail, such as analysis, editing and quantization of pitch inside audio parts, converting audio to MIDI data, wide-ranging surround sound support, excellent format support and live search. There’s even a free iOS app that gives you hands-on control of important transport and other functions remotely.

It works in its own particular way – as does every DAW – but the learning curve is relatively gentle and the flexible, tabbed single-window interface is particularly pleasurable to use. Everything can be tweaked and controlled to your liking and although powerful it doesn’t bury you in choices or endless submenus. The interface might seem a little clinical to some, but this is preferable in most cases to one that’s overly flashy but gets in the way of actual work. The balance of fun musical tools such as guitar processors and instruments and serious stuff like post-processing, wave editing and surround is well handled and this is a DAW that many people should feel comfortable using, whether in a bedroom setup, pro studio or even on stage. A free demo is available so there’s no reason not to check it out for yourself – and you may well end up being glad that you did.

A powerful and well designed DAW with a wealth of features that cater for users of all levels and that deserves a wider audience.