Image Line’s veteran DAW looks and feels more modern than ever as it celebrates its 25th birthday with a new look. 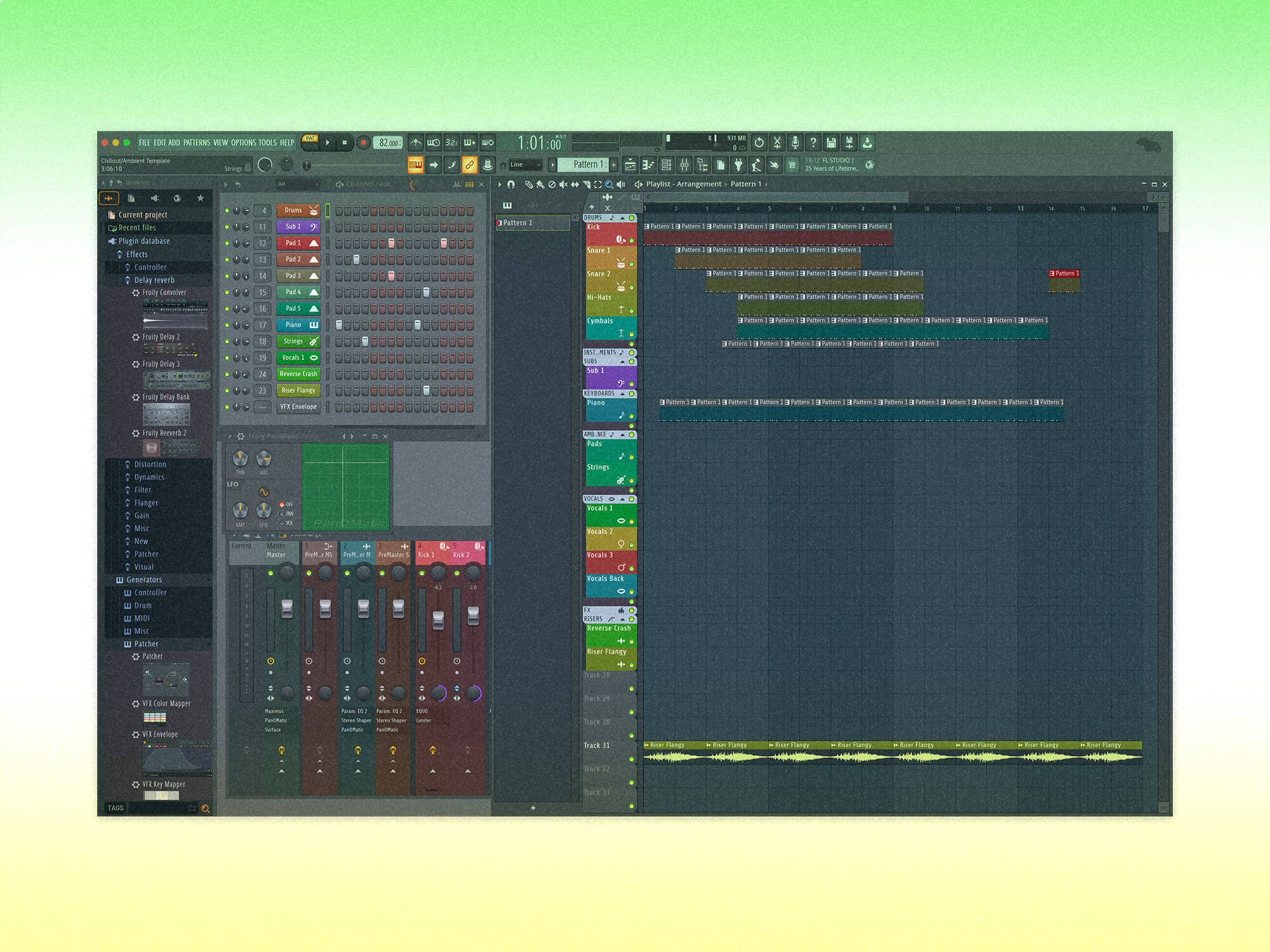 December 2022 marked the 25th birthday of FL Studio, a remarkable milestone for any DAW. In its first incarnation as FruityLoops, it was more of a musical sketchpad but has long since evolved into one of the most advanced music production tools around. In 2018 it made the leap to macOS, finally opening it up to Apple users after years of a Windows-only existence. Image Line has a remarkably generous policy of free lifetime updates so this review isn’t going to spend long pondering whether you should update as an existing user, because it’s completely free to do so. Rather, we will look at how FL Studio fits into the music tech landscape and what it can offer new or switching users.

Every DAW has its own workflow but that applies especially to FL Studio. Where most competitors like Cubase, Logic Pro and even Ableton Live for the most part use a fairly conventional timeline-based interface where you record audio and MIDI into tracks that are layered up, here there’s much more reliance on patterns. More generally, FL Studio employs conventions that aren’t so common in other DAWs so if you’re switching, some familiarisation will likely be required.

On the left of the main window is the Browser which contains essentially everything: all your project templates, samples, MIDI clips, instruments and effects both stock and third-party. These can be variously dropped into the Channel Rack or the Playlist depending on content type. Patterns can be step sequenced in the Channel Rack or played and edited in the Piano Roll for any instrument. Popup graph editors can be used to enter automation and CC data as well as velocity, release, tuning and many more. Extensive options are available for generating or entering MIDI patterns.

Switch FL Studio into Song mode (from Pattern mode) and you can arrange your various patterns into a song using the linear timeline. Audio can also be recorded directly into a track, and you’ll need to be sure you have the settings correct so it’s not recorded into a wrapper – a sort of container that lets you edit a clip. All of this is sent to the mixer, which is supremely flexible, using an innovative system of virtual cables to show you how sources are routed. The app uses a windowing system that allows you to float, dock and overlap all the different sections freely, with layout presets also available. This can get pretty chaotic on a smaller screen if you don’t keep on top of it, though the flip side of that is that it supports crazy multi-monitor operation – meaning you can spread your windows over as many screens as you can realistically connect.

The Producer Edition comes with a very solid set of Image-Line’s own plug-ins, which have been built up and upgraded over many years. These range from conventional mixing tools like EQ and reverb to instruments like Poizone and Slicex, the latter being one of the DAW’s more specialised inclusions that straddle the line between instrument and tool, in this case giving you a way to slice up and arrange beats and other material for use in a project. Plus, you get Edison, a fully featured audio recorder and editor that loads into an effects slot. Again, a slightly different way of approaching things. There’s other useful tools such as MIDI generators and even visualisers, too – you’ll find an exhaustive list on the website and Image Line reserves some of its biggest plugs for the aptly named All Plugins Edition.

So what else is new in version 21? You’re now able to visually tweak the DAW, with some funky themes available in the settings that, surprisingly, look pretty cool and have a few options. You can now set all project data to be saved in a unique per-project folder with subfolders for different types of audio. Spanish, French and German language support has been added and Apple .m4a files now load.

In the Playlist, audio clips get fade and gain controls meaning you can easily crossfade and change clip gain with the mouse. There are new plugs too – LuxeVerb is an advanced algorithmic reverb, Vintage Phaser (Signature Bundle and higher) is modelled on the Small Stone pedal, Multiband Delay can delay individual frequency bands separately and VFX Sequencer is a pattern arpeggiator and step sequencer. There are a ton of other changes and updates – you’ll find the full list of every change here.

Fl Studio is without a doubt one of the most advanced and configurable DAWs around. It feels incredibly slick too, with lightning-fast operation on any fairly recent Mac or PC and a modern, futuristic look and feel. Everything about the interface feels lightweight, in a good way.

At the same time, there is a huge amount of menu-diving to contend with. This is partly due to its workflow where you have to create a thing then assign it to another thing then set your options and so on. If you’re used to a DAW that goes create instrument track > record MIDI, this can take some getting used to. It’s also easy to become swamped with options, with so many buttons and right-click menus found throughout almost every part of the interface. For sure it’s also a consequence of the great flexibility that FLS offers and people who are proficient in the software probably barely even register it as an issue.

While the workflow may better suit those who are used to pattern-based composition, there’s much here for producers of all kinds once they become accustomed to the conventions and workflow. The selection of effects and instruments available in the Producer Edition and higher is truly impressive, covering not only mixing and sound generation but programming and visuals too. The toolsets found throughout the app are also extremely powerful even if they do involve some window juggling, and the level of customisation on offer is commendable. Even before the free lifetime update, the price of the Producer Edition is very attractive considering what you get. While the workflow might not suit everyone, FL Studio is among the most flexible and powerful DAWs around, especially for those working with electronic music.