Dynaudio has applied its expertise to the familiar problems of desktop placement. Huw Price listens in. 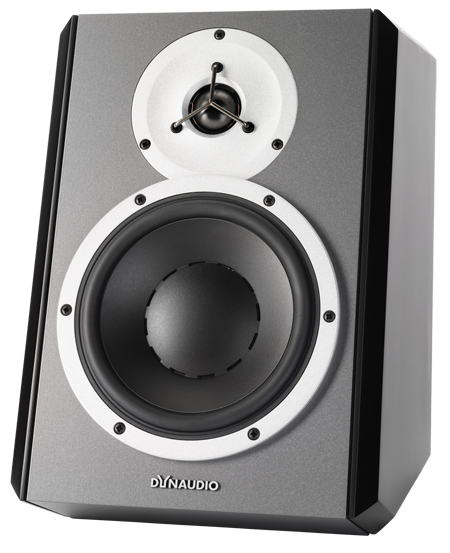 The fact is that most recording engineers no longer work in purpose-built control rooms. It would be wonderful if we all had acoustically treated spaces with plenty of space for perfect monitor placement, but there must be a degree of compromise between the ‘ideal world’ and the ‘real world’.

For instance, it would be ideal if we could utilise desktop space on either side of our computer screens for monitor speakers. After all, screens dictate the position from where we do most of our listening. Unfortunately, most computer speakers are neither accurate nor revealing enough for reliable, full-frequency monitoring.

Maybe you’ve tried placing regular speakers on your desktop with disappointing results. If the speakers aren’t quite tall enough the tweeters won’t be firing at ear level, which compromises imaging and frequency perception. Of course, you could try placing them on speaker stands, but they’ll look a bit daft and there’s always the chance that they’ll get knocked over. Then, of course, there’s the issue of reflected sound waves bouncing off the desk surface and interfering with direct sound waves.

The DBM50 is not merely a pumped-up computer speaker. The enclosures are substantial and 100 watts of onboard power is distributed evenly between the woofer and the tweeter. Dynaudio’s designers have also taken the sensible decision and made the sides of the enclosure flat and square to the front baffles. This allows DBM50s to be placed sideways on regular speaker stands or a meter bridge.

Since the DBM50s are designed for less than perfect conditions, there’s plenty of frequency adjustment switching. The bass can be adjusted by +2dB and the treble by +1dB. To compensate for any midrange lift caused by reflections from the desktop, the mids can be attenuated by 2dB or 4dB from the flat setting. Additionally, there’s a high-pass filter with three settings – Flat, 60Hz and 80Hz – that can be activated when the DBM50s are run in conjunction with a subwoofer. The stock bass roll-off is set at 46Hz.

Audio inputs are made via XLR or TRS jack and there are three input level settings labelled +4dB, 0dB and -10dB. The power switch is around the back, but the DBM50 has two power modes – On and On/Sleep. The DBM50s will therefore doze off if you do, thus saving on your electricity bill and precluding the need to grope around for the power switch. Send them audio and they automatically wake up.

Given Dynaudio’s application guide, we felt obliged to test these speakers on a desktop in addition to our regular ear-level stands. The first test revealed that the DBM50s produced a wider image than most of the monitors we test and use on a regular basis. The downside was that the central elements of mixes – such as lead vocals and snare – weren’t as solid and crisply located as we would have liked. No problem, though: just toe in the DBM50s a tad more than usual and the centre image will improve substantially.

The wider image characteristic proved advantageous when we placed the DBM50s on our desktop. We have tried this setup with other speakers, but with a 1.3-metre desk width, we have always found the resulting image too narrow. The DBM50s certainly achieved the best results we have experienced so far, and once we had notched down the midrange by 2dB we found the results more than satisfactory.

The DBM50s exhibit the full-bodied clarity we expect from Dynaudio. The upper-mids are quite forward and the treble is defined without being edgy. We didn’t detect any port chuffing and the bass was solid down to 50Hz. The angle of the front panel does mean that the height of your chair/desktop may need to be adjusted for optimum results in desktop mode – depending on how tall you are – but the sweet spot does seem wide and forgiving.

An active monitor in the Dynaudio tradition that addresses the issues of desktop placement but can be used conventionally, too.