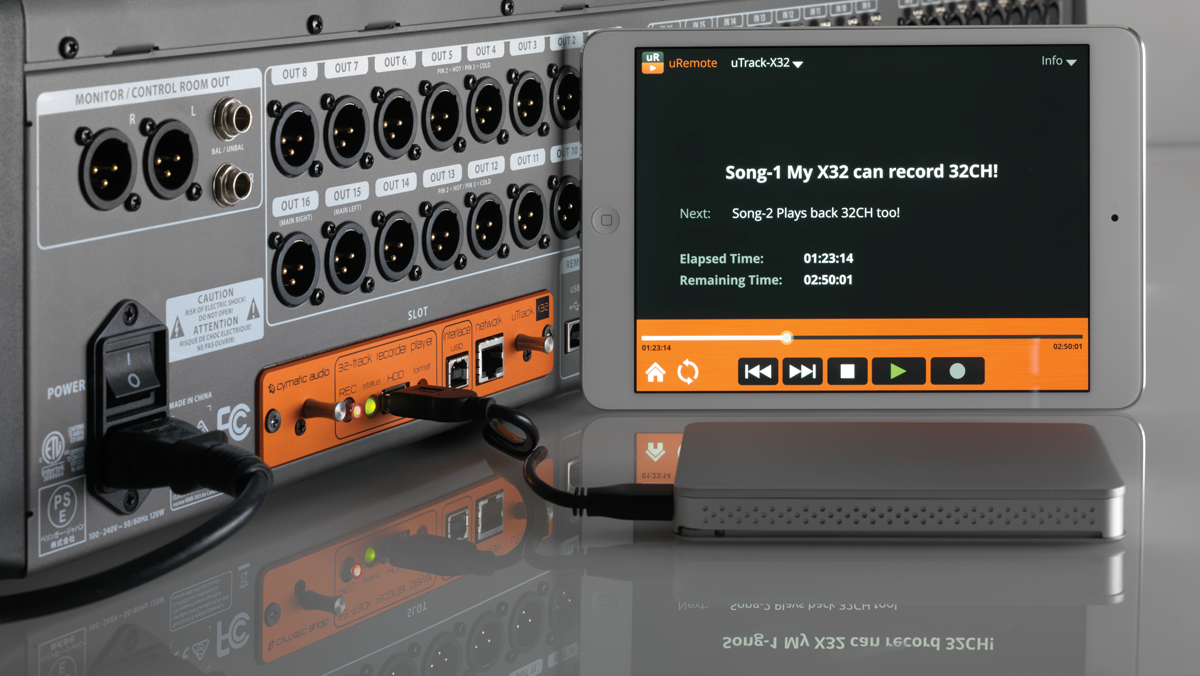 Cymatic Audio has already made a mark on the live recording world with the uTrack 24. Now, the uTrack X32 expands into the X32 and M32 consoles. Mike Hillier gets to soundcheck early…

However, when it comes to recording, the X32 is capable of recording only a single stereo output to a USB drive as standard. Behringer has released a variety of expansion card options for the X32, which enable the mixer to behave as a 32×32 audio interface over USB, FireWire or MADI.

The Cymatic uTrack X32 is similar in many ways to these expansion cards. However, in addition to enabling you to use the X32 as an audio interface, the uTrack X32 gives you the opportunity to record or play back directly to a FAT32-formatted USB drive. 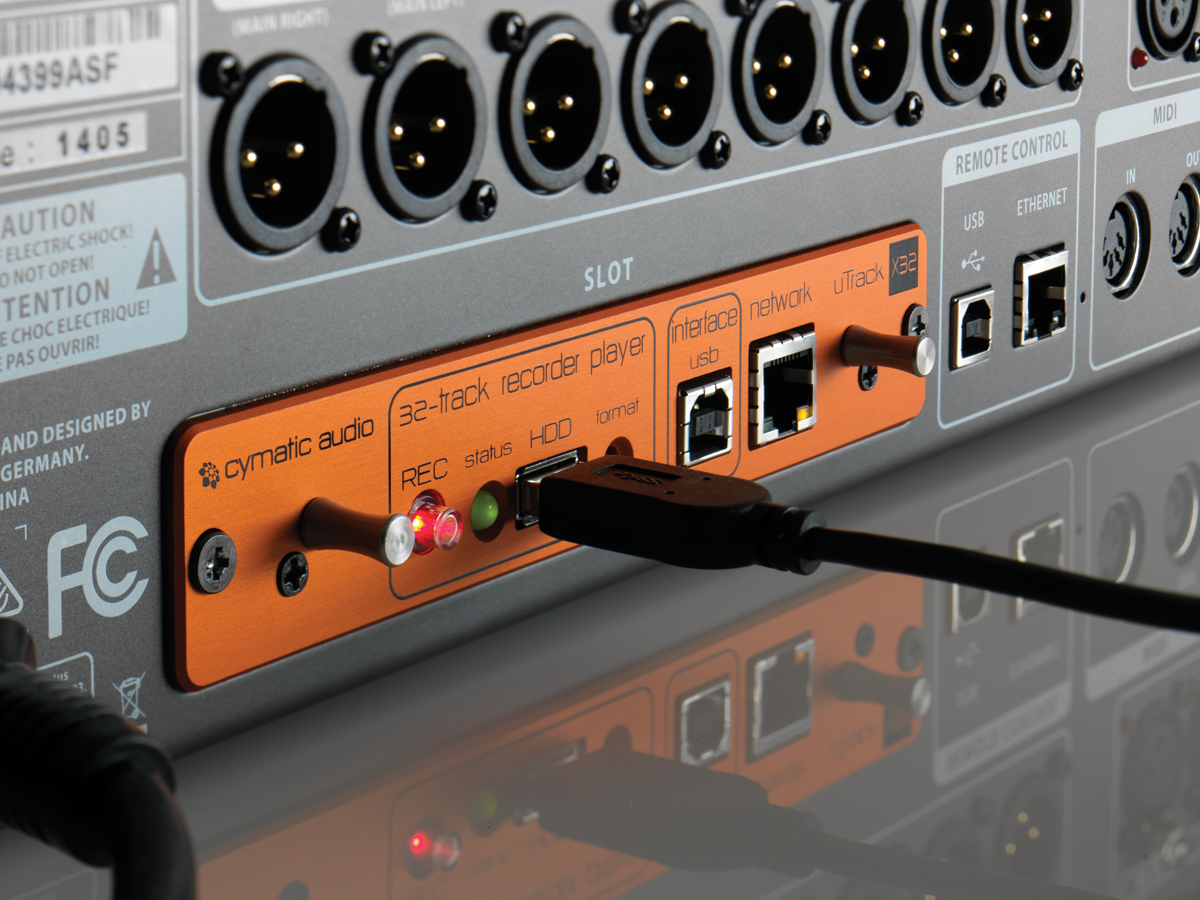 In addition to the Behringer X32 family of consoles, the uTrack X32 can also be fitted to the MIDAS M32 range. To enable us to carry out this review, Studiospares kindly loaned us a Behringer X32 console, into which we installed the uTrack X32 card. Installation is incredibly simple – the card slides into the expansion slot on the rear of the X32 console, with guide rails ensuring that the pins on the card line up with the port.

Recording
With the card installed, we were able to connect the console to our Mac via USB and see the X32 as a 32-channel interface. No drivers were necessary and we were up and running in Pro Tools immediately. It’s important to note that the card has two USB ports: a Type B port for connection to Mac, PC or iOS device for use as an interface, and a Type A port for connecting USB drives.

If a drive is connected to the Type B USB port, the hard disk mode takes precedence and the audio interface mode is deactivated.

Using the X32 as an interface lets you use the 32 mic preamps built into the console as inputs to your DAW, then for mixdown you can send 32 channels back into the console for a more hands-on approach. You can also hook up your external hardware to the eight aux sends on the console, making the X32 a useful centrepiece for your studio.

Any digital conversion occurs inside the console, using the console’s convertors. While using the uTrack X32 as an interface is great fun, this functionality has been available for a while using Behringer’s own expansion cards. The real innovation the uTrack X32 brings is the Hard Disk mode.

Dragging a laptop to a venue just means another item to worry about getting covered in beer. Then launching your DAW and configuring it for recording 32 channels can be a chore while you should be soundchecking. With the uTrack X32, none of this is necessary.

Simply plug in a FAT32-formatted USB drive and with one button push you are recording every channel, ready to be copied into your DAW later. The uTrack X32 is even capable of formatting the USB drives for you – although, of course, you will lose any data on the drive. 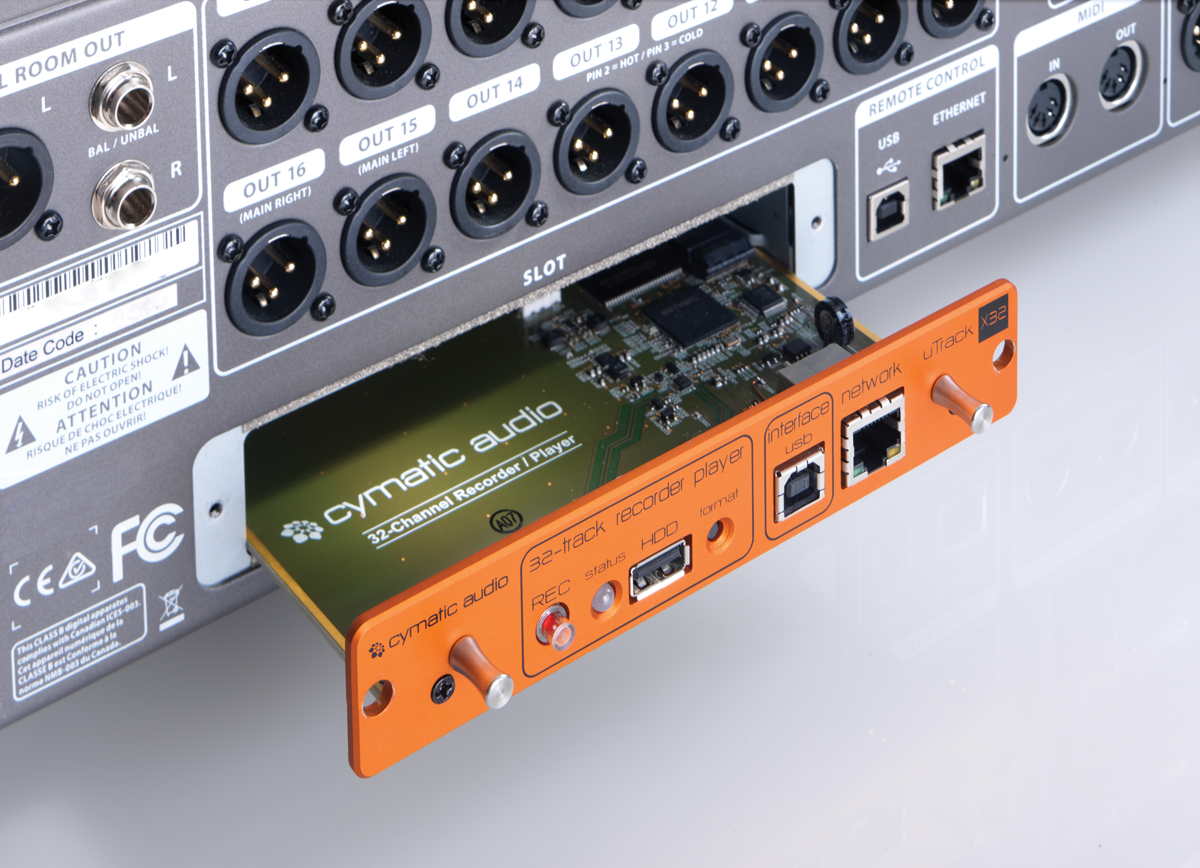 Playback
Recording to the uTrack X32 is likely to be the most common use for the expansion card, but Cymatic has also made it possible to play back from USB drives using the uTrack X32.

To do this, you will need to connect the device over a network (an Ethernet port is built into the uTrack X32 card, as well as the Ethernet port in the X32 console) to a PC, Mac, iOS or Android device. As well as enabling you to use the USB drive as a 32-channel playback device during performances, controlled from an iPad, the benefit is that touring engineers can use the recording of a previous show as the basis for their soundcheck.

For anyone who already has an X32 or M32 console, and doesn’t have an expansion card for multitrack recording, the uTrack X32 should be a no-brainer. Touring engineers who work with these consoles regularly should also consider the uTrack, as it can be fitted quickly and will make soundchecks easier, as well as providing a recording option 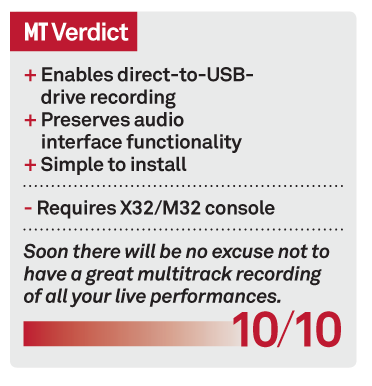