uTrack 24 has everything you need to perform and record live performances, but it doesn’t end there. Mike Hillier finds out if it’s all things to all men… Details Price £749 Contact John Hornby Skewes 01132 865 381 Web www.cymaticaudio.com Amazon.co.uk Widgets Decreasing budgets for touring, with increasing expectations, has led to many musicians relying […] 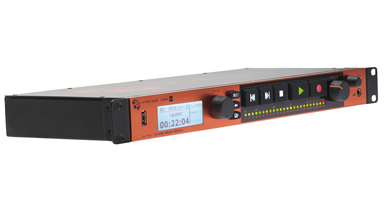 uTrack 24 has everything you need to perform and record live performances, but it doesn’t end there. Mike Hillier finds out if it’s all things to all men…

Decreasing budgets for touring, with increasing expectations, has led to many musicians relying on backing tracks as part of their live sound. At the top-end this is nothing new, but now even low-key DIY musicians can drag along a laptop and play along to backing tracks.

Similarly, recording the performance is now also possible, often with the same laptop. However, as anyone who has dealt with this scenario will tell you, laptops and DAWs have a tendency to crash at inopportune moments. In the studio this can be an irritation; in the middle of a live performance this can be costly and humiliating. This is where dedicated systems, such as the uTrack 24, come in useful.

Orange is the New Black
The striking orange front panel of the uTrack 24 houses a USB type A port – for USB storage devices, a bright LCD screen alongside a rotary encoder (which doubles as a button for adjusting settings), three rubber function keys, five large rubber transport keys, a main output volume pot, headphone volume pot and two TRS ports, one for headphones and the other for footswitch control.

There are 24 tri-colour LEDs along the bottom of the front panel providing visual feedback of incoming audio on each of the 24 channels, or can be configured as a single 24-segment meter.

The rear houses no less than six DSub connectors, providing balanced line-level analogue I/O in banks of eight channels. Two further TRS main outputs provide a stereo DSP mix of the input signals for easy monitoring while recording. The rear also houses BNC Wordclock I/O, DIN sync, a MIDI out port, USB 2.0 type B – for connection to your DAW – an RJ45 network connector, and of course the power connector.

The uTrack 24 can record at sample rates up to 96kHz, but it can only handle 24-channels at up to 48kHz, and drops to eight channels at 88.2 or 96kHz. You can sync multiple uTrack 24 systems using the DIN sync for larger recordings, or it can be integrated into other systems using WordClock.

Jack of all Trades
In the studio, the uTrack 24 acts as a 24×24 USB audio interface. There are no mic preamps included, but at this price with that much I/O, the uTrack 24 is a very good deal. Disappoin

tingly, the track count falls drastically once you move above 48kHz, with only eight channels each way at 88.2/96kHz. We do much of our recording at 44.1/48kHz, but if you have to live at the bleeding edge then this is worth keeping in mind.

We hooked the uTrack up to our studio patchbay via DSub and were able to route audio to and from all of our outboard. The conversion is neutral and uncoloured, it’s not quite as detailed as our Lynx Aurora 16, but at less than half the price, that shouldn’t be a surprise.

Packing a 24-in/24-out audio interface into a 1U rackmount chassis would have been enough to catch our eye, but the uTrack 24 has done that almost as an afterthought, because at heart this box isn’t just an interface, it’s a portable audio recorder and playback system. Adding the interface then, is simply the icing on the cake.

How simple the uTrack 24 is to hook up depends on the live console you’re recording from. Ideally you want a console with individual channel direct outputs, enabling you to record the signal coming off the desk preamp before any EQ, compression or fader moves. We have access to a MIDAS Heritage 3000, which

has direct outputs on each channel and recording with the uTrack 24 was a breeze. However, many desks don’t have direct outputs, so you’d need a splitter and then separate outboard mic preamps.

For playback things are much simpler, and we were able to play the recordings we made on the MIDAS back through the MIDAS simply by patching the outputs of the uTrack to the line-inputs on each channel. Whether for backing tracks, or even for quickly sound-checking without the band this is a great feature. Furthermore, MIDI tracks stored in the same folder as the audio can also be played back, enabling MIDI instruments to be played in sync with the audio from the uTrack 24. 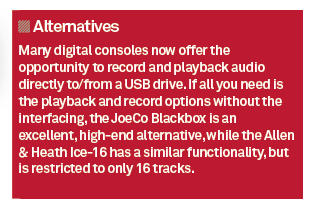 The uTrack 24 is a versatile tool, especially for engineers who work in live sound, but also for musicians who may want to add a rock-solid, easy-to-use playback system for backing tracks, and of course anyone who may do a little of all of the above and prefer one system rather than several. 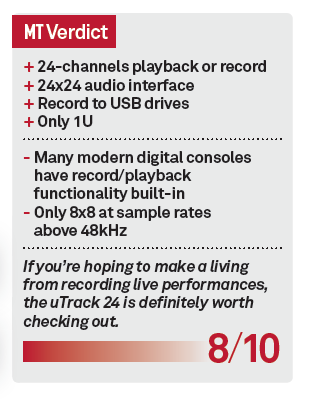